We chat with the transgender lawyer on equality, trans-masculinity, and his historic run for judicial office. 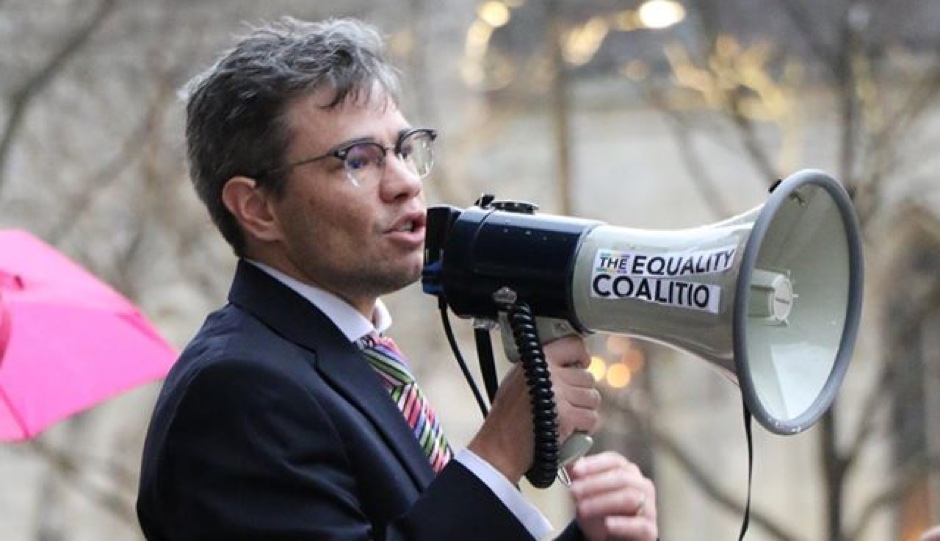 Henry Sias is a transgender attorney and community advocate running for Court of Common Pleas judge. We speak with the trailblazing public figure on on social justice, trans-masculinity, and his thoughts on making history as the first transgender candidate to run for office in Philadelphia.

Tell us a little bit about yourself.
I have lived in Philadelphia for ten years, but I’m originally from Michigan, and I spent much of my childhood in Detroit. I was raised by a single mom who worked very hard to keep her family afloat, and we moved very frequently. In fact, I went to five different elementary schools in six years, many of which were part of Detroit’s public school system (and all of which were public schools). I went to Western Michigan University in Kalamazoo, with the idea that I would get into creative writing and become a novelist. I had a great time there and learned so much, and one of the things I learned is that it is extremely unlikely that I will ever write a novel, so I took the LSAT and decided to apply to law schools. I wasn’t sure what lawyers did – in fact, I had never met one – but I went to law school at Yale, and I’m so glad now that I chose this path. I love being a lawyer, being in the courtroom, and working in the justice system.

I have clerked for two Pennsylvania Supreme Court Justices: Justice James J. Fitzgerald III, and Justice Jane Cutler Greenspan. I have also clerked for a homicide trial judge, Judge Barbara McDermott, and Judge Kenneth Powell, a civil judge who is part of the Mass Tort Program. I am a co-founder of the Philadelphia Lawyers for Social Equity, a legal nonprofit that has performed thousands of free expungements for low-income Philadelphians. I am involved with Philadelphia’s indigent defense program, and in efforts to overhaul that program. I have also represented several transgender individuals, as part of my pro bono work, in name changes and in cases involving medical care and coverage. I have performed civil rights work in the federal courts as well, including litigating employment discrimination cases. It’s very satisfying work.

You are a well-known transgender attorney in Philly. As a legal professional, what is your perspective in regards to the city addressing LGBTQ issues across the board?
As an out trans attorney, I think Philadelphia is improving on its handling of LGBTQ issues, but there is always room for more growth! I’m excited about the Mayor’s Commission on LGBTQ Affairs. There are so many wonderful people in that group, and I can’t wait to see what they do when they combine their talents. The citizens of Philadelphia themselves have been very kind to me, overall, especially given that I was approaching them with clipboard and pen on random street corners of the city during the petition period (and we all know how much people love being approached with a clipboard and pen!). I was warmly received by so many Philadelphians while I was loudly outing myself as trans, and that will be a great memory from the campaign trail that I keep throughout my life.

Sometimes people in government lead, and that’s when they are at their best, and sometimes they are caught flat-footed and go into reaction mode. What happens then is seldom as satisfying and workable in the long-term. I think the Commission on LGBTQ Affairs puts the city in a good position to lead rather than react, and I am also enthusiastic about seeing Amber Hikes’s vision for her office. I love that Amber Hikes and Sharron Cooks are leading a “Pop-Up Love Party” to counter the trans deniers that are taking their ignorance on the road and possibly bringing it to Philly this weekend.

From your viewpoint, are there any laws or policies you would like to see improved for the community citywide?
Honestly, Philadelphia’s nondiscrimination law is excellent, and most people get it. Where we lag behind is in awareness. I would like to see more local businesses leading in training on cultural competency for all of their employees, rather than waiting for something bad to happen and then reacting. For smaller businesses, maybe it makes the most sense to do this through the neighborhood business or civic associations. The laws are there, and the laws are pretty clear – they just need to be taken seriously.

With your current race for Court of Common Pleas judge, you’re the first transgender candidate ever to run for elected office in Philadelphia. If you win, you would be the first transgender man ever to be elected judge in the nation. How have these barrier-breaking implications shaped your campaign thus far?
Breaking barriers has meant shaking expectations of what a judge is supposed to look like, talk like, and act like. I know that when women entered the judiciary, some people wondered “Will they be able to control their courtrooms?” Well, yes, women in the judiciary are very capable of controlling their courtrooms. Similarly, there may be some expectations that because I appear younger than I am and because I’m a potential “first” that I won’t be afforded the respect that a judge needs in order to conduct court. This underestimates not only my experience, but the experience and professionalism of the local bar. Sometimes people read me as gay and sometimes they aren’t sure how to read me, but everyone deserves respect regardless of how you are able to perceive them. I can tell you that I didn’t work so hard and go through so much in order to get out of one box that didn’t fit me just so that I could get trapped in another box that doesn’t fit me, so I will always have an expansive and expressive vision of masculinity. I’m glad have a potential opportunity to carry that expansive vision to the bench.

Throughout mainstream media, transgender men are often missing from the general conversations related to trans issues. What are some unique issues you would like the press to talk about that relates specifically to trans men?
Thank you for asking! Trans women and trans men both gain when we have opportunities to put our perspectives into harmony. They are different, but they make sense and are most powerful when considered together. As a trans man, I talk to women (cisgender and transgender) about how my experience has changed now that I am perceived as male in most social interactions. It’s not as if women need me to tell them that men are afforded more social space and respect – they know! Nevertheless, there is something that feels powerful about reversing some of the gaslighting that women undergo all the time. People tell women “Oh, it’s all in your head” or “He meant it as a compliment.” It’s so nice not to be told to smile anymore.

On the other hand, trans men sometimes feel pressure to over-perform masculinity in order to be taken seriously as men. One of the key issues we have is one we share with transgender women – we need people to believe us when we tell them who we are. We get to be the experts on our own experience of ourselves. Acceptance is key, and it saves lives.

In light of all that has recently happened in the LGBTQ community politically, what is one piece of advice you would like to give to those feeling doubtful?
My piece of advice for someone feeling doubtful is this: You are probably doing it right if you feel doubtful. It’s the people who feel that they are 100 percent correct, that they “don’t have a racist/sexist/homophobic/transphobic bone in their body,” who are to be avoided. The most difficult ethical work happens where there are strong competing ethical claims and no easy answers, but a desire for an easy answer is almost always dangerous, and can lead you down a dark path. If everyone who was obsessed with not being a racist would instead become obsessed with doing non-racism and anti-racism, we could really get a lot done.