Just Who Is This Lawyer That Seth Williams Can’t Afford? 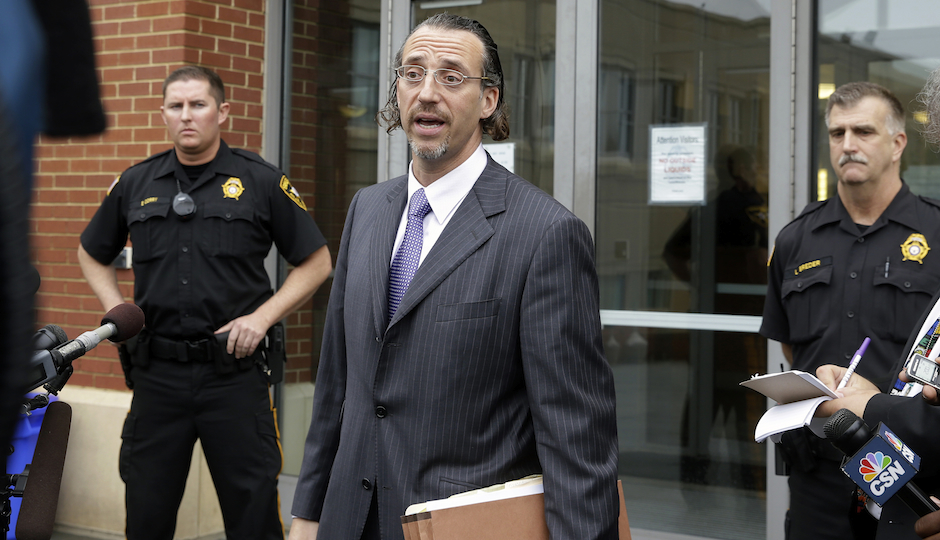 Seth Williams is having some problems. Oh, not just that pesky little arrest and all those federal charges. He’s also having lawyer issues. Williams enlisted the assistance of in-demand Center City attorney Michael Diamondstein, but now Diamondstein is begging off the case, citing ethical issues as well as the fact that Williams can’t afford to pay up. A judge has given Williams until this Friday to sort it all out, and in the meantime, we got to wondering, who the heck is Michael Diamondstein?

The name surely sounded familiar, but we couldn’t quite place it. But then we realized that this is the same Michael Diamondstein who represented former NFL star Ray Rice after Rice was caught on video knocking out his then-fiancée (and now wife) in the elevator of the Revel in Atlantic City. (Did anything good ever happen in that place?)

Here’s the video to refresh your memory:

We don’t know how much Rice paid Diamondstein, but the former NFL star definitely got his money’s worth. In the end, thanks in no small part to Diamondstein, Rice got away basically scot-free. He entered a plea deal and received entry into a pretrial intervention program for first-time offenders. Boy Scout stuff.

But that was what happened inside the courtroom. Behind the scenes, Diamondstein floated the hypothetical theory that maybe, just maybe, Rice punching his much-smaller lady was some sort of self-defense situation. You know, hypothetically.

We’re not privy to the ins and outs of Diamondstein’s full representation of Rice, but Deadspin summed up their opinion of the matter with this headline: “Don’t Forget: Ray Rice’s Attorney Is a Piece of Shit.” Deadspin, true to its hyperbolic form, went on to call Diamondstein the “Typhoid Mary of the smear” campaign against the victim.

You definitely can’t say that Diamondstein doesn’t try hard to win verdicts that favor his clients.

There was the time he tried to say that the guy who shot his boss in a tire shop after the boss reprimanded him for doing a shoddy job did so because he grew up in a violent environment. He lost.

He once demanded that a murder witness remove her burka in court. “How can I cross-examine someone who’s hiding behind a mask?” he asked of the judge. The judge said the burka could remain.

And when a drag racer killed a mother and her three kids on the Roosevelt Boulevard, the driver turned to none other than Diamondstein, who argued that sure, the guy killed the young family, but he didn’t show the “malice” required to convict him on the specific charges laid out by the D.A. The driver was, in fact, convicted.

As for Williams, Diamondstein managed to get Williams released on $50,000 bail, under the conditions that he surrender his passport and not leave this part of Pennsylvania. He can’t have guns, either.

And actually, Williams didn’t have to lay out any cash bail: This trustworthy gent, who has all kinds of financial issues, was released on his own recognizance, meaning that if he doesn’t show up for court, then he owes $50,000. We’re pretty sure a lot of the people that Williams prosecuted would have loved such a deal.

After Williams exited the courtroom on Wednesday, he ducked the press. But Diamondstein, true to form, didn’t avoid the cameras.

“This indictment is 24 hours old and yet too many politicians and commentators have already tried and convicted Seth Williams in the media,” he said, according to Philly.com. “Simply because the government makes explosive allegations in a complaint doesn’t mean they’re going to prove it in a court of law.”

Unfortunately for Williams, it sounds like he’s going to have to settle for a lesser attorney. But hey, maybe one day, Diamondstein could write a book about the whole thing.

Diamondstein amusingly got some press back in 2007 for his crime novel, Cloaked in Doubt, in which a fictional mayor of Philadelphia was on trial for murder. Diamondstein said the protagonist was inspired by Ed Rendell.

We asked Diamondstein for an interview, so that we could learn more about his career, but he didn’t feel comfortable with that idea.

“I’m honored that Philly Mag would want to do a piece about me,” he wrote. “I’ve certainly been involved with a number of interesting cases. In most circumstances, I try to help reporters out if I can. But unfortunately I will have to pass. I’ve known Seth for 20 years. Collaborating on a piece about me that was essentially written ‘on his back’ would make me feel uncomfortable.”

Who said lawyers don’t have ethics?