Here’s the Latest on the Snowstorm Headed Our Way Tonight

You might want to chat with the boss now to smooth the path to staying home tomorrow. 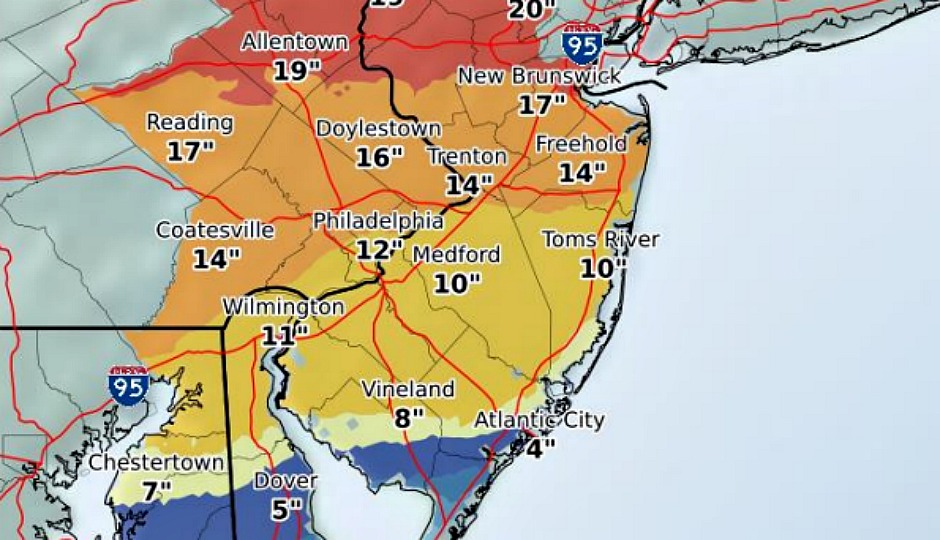 Map via the National Weather Service

One of the warmest winters on record is set to go out with a bang.

Forecasters are warning that a winter storm starting later tonight will bring substantial snowfall to the East Coast – with Philadelphia likely seeing 8 to 12 inches of snow.

The storm is set to begin around 11 p.m. tonight and continue into midday Tuesday, according to the National Weather Service. The suburbs outside the city – including Doylestown, Coatesville and Reading, could see 18 inches of snow. Jersey Shore residents should expect dangerously high winds and coastal flooding, and New York City and the coast of Connecticut could see blizzard conditions.

In Philadelphia, the heaviest snowfall will likely arrive during the morning commute on Tuesday – so you might want to plan to stay home.

Prepare for high winds to lead to downed trees and potential power outages. Governor Tom Wolf has issued travel restrictions on some Pennsylvania highways. Beginning at 10 p.m. tonight, the speed limit on all interstates and expressways east of and including I-99 – as well as the Pennsylvania Turnpike from the Bedford interchange to New Jersey and the entire Northeastern extension – will be reduced to 45 mph.

In a statement issued Monday, Wolf advised residents to stay home and stock up on emergency supplies.

“I ask residents and commercial drivers across the commonwealth to prepare to avoid unnecessary travel on roadways during this time – as to let road crews and emergency responders do their jobs and minimize dangerous travel,” Wolf said.

Philadelphia officials are planning to deploy 450 salt and plow trucks, according to the Inquirer. The city has declared a snow emergency starting at 9 p.m. tonight – so be sure not to park on snow emergency routes. Also, trash and recycling collection will be cancelled tomorrow.

Public transportation in the city will likely be spotty. Check with SEPTA for the latest updates, and be sure to check with your airline if you have plans to fly tomorrow. More than 1,000 flights have already been cancelled at the Philadelphia International Airport.

Mayor Jim Kenney has issued a Code Blue – if you see anyone outside who appears to be homeless, call the Project HOME homeless outreach hotline at 215-232-1984.