But things could be a lot worse. Here's how. 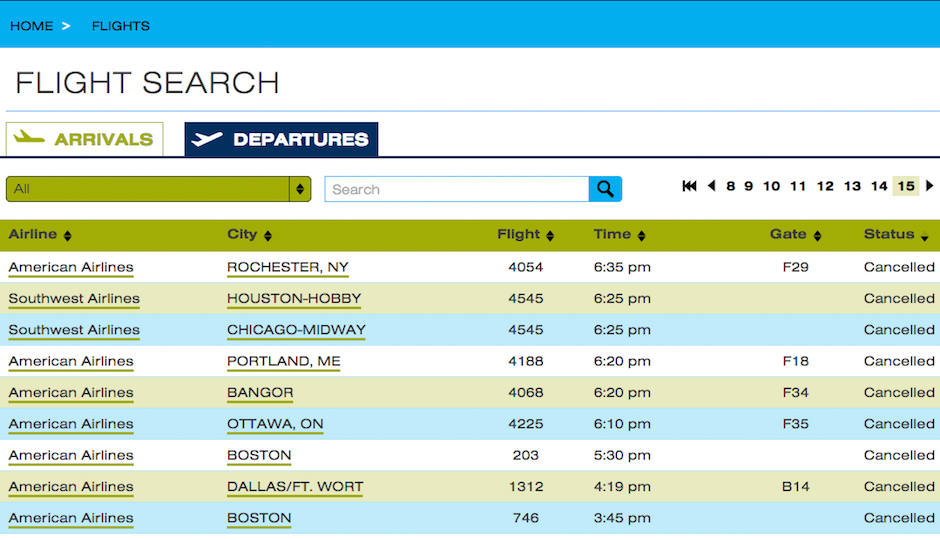 A screenshot of some of the cancellations at Philadelphia International Airport as of Monday morning.

If you were still hoping to catch tonight’s 9 p.m. American Airlines flight from Philadelphia to Orlando, you’re out of luck. That flight, along with more than a thousand other arrivals and departures at Philadelphia International Airport, has been cancelled.

On Monday morning, the air traffic-monitoring website FlightAware had reported some 2,300 cancellations, but Philadelphia International Airport spokesperson Mary Flannery ballparks the number at around 1,200. Of course, more cancellations are expected.

According to Flannery, American Airlines has cancelled all Tuesday flights through 5 p.m. — with some cancellations on Monday night as well — and Southwest has cancelled all or most of its Tuesday flights at the airport. American Airlines is the largest carrier at the airport, accounting for approximately 73 percent of traffic. Other airlines are expected to make final decisions on Monday afternoon.

“We’re expecting Tuesday traffic to be extremely light if existent at all,” Flannery tells us. “And it’s important for passengers to realize that while some airlines have eliminated fees to change your ticket due to the snowstorm, if you booked through a third-party site, you need to check with them.”

But Flannery says that while the cancellations are an inconvenience, it could be a lot worse.

“With a storm like this, we have a lot of advance warning,” she points out. “So a lot of people were on the phone over the weekend rebooking their Tuesday flights for Monday, so today is a very heavy day for us as a result. It’s the sudden changes in weather that really make things difficult for us.”

Of course, some passengers who haven’t planned as well in advance are still likely to get stuck at the airport while we all wait out the storm, and Flannery says that Philadelphia International Airport is ready for them.

“We own several hundred cots, and we give out blankets and pillows and snacks and vanity kits,” she explains. “And we’ll be working around the clock to plow and keep at least one runway open. Technically, the airport never really closes.”

For the most up-to-date information on flight cancellations at the Philadelphia airport, check the website at phl.org.