OPINION: Single-Identity Social Justice Is No Justice at All

Owens: Championing an issue without recognizing the overlapping identities of those who are touched by it discredits the entire cause. 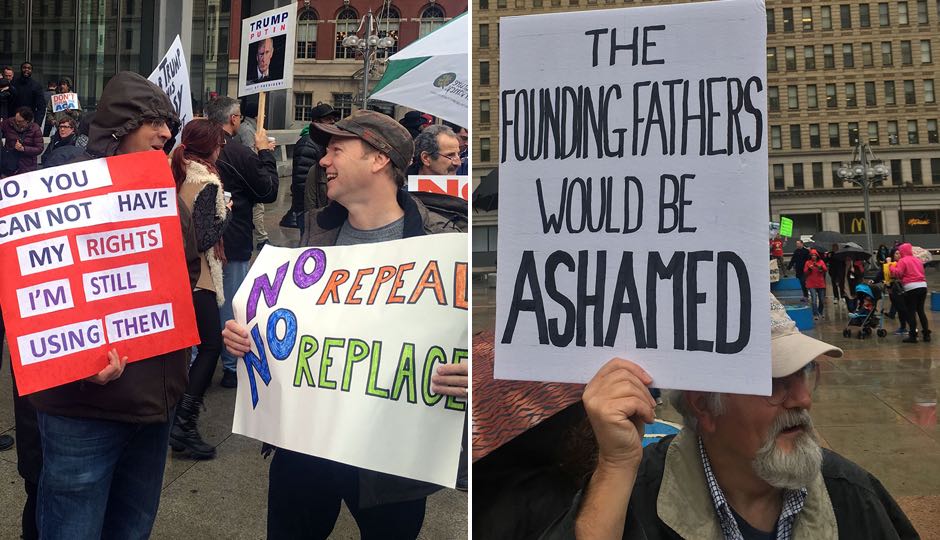 “There’s a gay Trump supporter in Philly,” a close friend of mine texted me on the last weekend in February. “Really? That doesn’t make sense,” I quickly responded. Minutes later, I was tagged on a viral post in a closed LGBTQ social media group I belong to. A scan of the outraged comments revealed that a senior adviser to Philly Pride Presents, Chuck Volz, a white gay man, is “an ardent Trump supporter.” I saw copies of provocative images and social media posts made by Volz that mocked people of color, women, and the Muslim ban. (All of this information was later reported on publicly.)

I quickly contacted Franny Price, the lead organizer of Philly Pride, to see if she had any clue what was going on. What I got back from her was that she’s always been aware that Volz was a conservative with “controversial views,” but that that didn’t necessarily keep him from being “a champion of LGBTQ rights in the community for a long time.” She later said that Volz wouldn’t step down from Philly Pride leadership because the organization felt that “his personal politics are separate from his commitment to the LGBTQ community.”

But as a black gay man in a relationship with a partner who has a Muslim mother, I cannot pretend as though individuals like Volz are committed to protecting me. Newsflash: The LGBTQ community includes black, Latinx, female, Muslim, and undocumented individuals. If you support a ban on Muslims entering the country, that includes LGBTQ Muslims as well. If you support politicians and policies attempting to keep marginalized groups from thriving in our society, you are not a champion of the overall LGBTQ community, but just the white cis-gender male segment of it. No matter how strongly you disavow anti-LGBTQ legislation, supporting laws that are potentially sexist, racist, xenophobic, and Islamophobic is antithetical to what equality in this country should look like.

Unfortunately, this fundamental misunderstanding has pervaded the ideology of “social-justice warriors” (a new catchphrase for those who fight for social causes on a regular basis) of all stripes. Last week, after Moonlight, the coming-of-age film about a black queer man, won Best Picture at the Oscars, some members of the black community reacted with animosity. I spent too many unnecessary hours engaging in arguments with black straight people about why it was a problem to undermine the film’s success simply on the basis of its having an LGBTQ theme. When I confronted the overt homophobia, I was told by some individuals that “LGBTQ issues can be other people’s concern” and that they would like to see “a black film win for once.”

The most disappointing thing about that remark? Moonlight was co-written, produced, and directed by a black straight filmmaker with a predominantly black cast. For some, black LGBTQ individuals aren’t seen as a part of the black community. This is such an irony given that many of these critics are supporters of the #BlackLivesMatter movement and probably don’t realize that two of the three black women who started it identify as queer.

These double standards we’re witnessing are largely due to the refusal of activists, social-justice leaders, and community organizers to evolve on intersectionality. Acknowledging the nuance and cross-sections of gender, race, sexual orientation, class, and religion in social causes is crucial to actually resolving conflict. You can’t be an advocate for feminism if you support causes that exclude and exploit Muslim women. You’re not a champion for LGBTQ rights if racism is tolerated among queer people of color.

In reality, there is no apex of moral high ground where one identity reigns over the others in deserving equal rights and protections. If one truly believes that all lives matter, then one should not be quick to take offense at black people reiterating that they matter when they feel endangered. No social-justice movement in recent history has ever been fought by a singular unit sharing the same identity. The civil-rights movement was largely fought by black men and women who were Christian, Muslim, LGBTQ, working-class, and/or wealthy. The gay-liberation movement was started by LGBTQ folks who were of color, cross-regional, and of various professional backgrounds. If we are to learn anything from our history, it’s that no social movement’s focus was ever linear or operated in silos — they all required various types of involvement and people.

Which brings me back to this new wave of social-justice warriors who think that uniform attention on a single message will strengthen an agenda: It will not — it will actually kill progress. An LGBTQ movement that ignores my racial identity and the religious beliefs and gender of my friends is not one I will support. A black community that believes that straight people are the only ones worthy of being celebrated isn’t the kind of network I prefer to subscribe to. Collectively, all social issues must be seen for what they are: complex and forever evolving.

In times like these, there is no room for internal segregation while externally advocating for equality for all. If such values are essential for the geese, they should most certainly be for the gander.