Are These Local Republicans Defecting to End the Shutdown?

A field guild to your local RINOs. Tea Party favorite Michelle Bachmann promised that none of the House Republicans would blink in their efforts to defund Obamacare, even if it means closing down the government for weeks.

A short time later, 20 House Republicans started blinking furiously enough to create an autumn breeze: Seven of the early blinkers are from Southeastern Pennsylvania and South Jersey. Democrats in Congress only need 17 Republicans to join them for a majority vote.

The Philadelphia area mass defection started a flurry of emails and blog posts with the accusation of “RINO.” Wikipedia defines RINO this way:

Republican In Name Only (RINO) is a pejorative term used by conservative members of the Republican Party of the United States to describe Republicans whose political views or actions they consider insufficiently conservative.

Apparently, a herd of RINOs is on the loose in our area. It started when Rep. Charlie Dent (PA-15), announced that he would support a “clean CR,” meaning a short-term Continuing Resolution to fund the government without any stipulation, including defunding Obamacare. It is worth pointing out that Dent voted for an unclean CR twice before his epiphany.

That started a “me too” RINO stampede, with area republicans tripping over themselves to also support a clean CR. The first one to follow Dent’s lead was Delaware County Rep. Pat Meehan (PA-7) who announced, “I came to Washington to fix government, not shut it down,” while ignoring the glaring hypocrisy that he voted three times to support the shutdown.

John Geeting, who writes for KeystonePolitics.Com, described the flip-flop as Meehan wanting a “backsie on his shutdown vote.” Phil Heron, editor of the Delaware County Times, responded to Meehan’s quote this way:

“Sounds good. It would have sounded a lot better last week, before all those people started losing their paychecks, before all those tourists were turned away from Independence Historical Park, and before the closed signs adorned the Statue of Liberty and Washington Monument.”

The reason for the sudden Pennsylvania-New Jersey fault line in the Republican united front is simple. Pennsylvania is a distinctly purple state, not quite Democrat blue or Republican red. New Jersey is solid blue. Polls show the public blames Republicans in Congress for the shutdown more that the Democrats or President Obama. Republicans in already-shaky districts want to get ahead of the possible wave of backlash in the 2014 mid-term elections.

Ironically, Mike Fitzpatrick, who re-took his seat in 2010 partly because of Congressman Patrick Murphy’s vote for Obamacare, is now seen as vulnerable–partly because of his vote to defund Obamacare. The two Democrats competing to face Fitzpatrick in 2014, Shaughnessy Naughton and Kevin Strouse, both took shots at Fitzpatrick for saying in a press release last week, “For lawmakers, a shutdown of the federal government is the ultimate admission of failure to do your job,”–and then casting a vote that led to the shutdown.

But as Fitzpatrick, Meehan and the rest flip and flop and flip again to appease moderate and independent voters, the conservatives who make up the Republican base are furious, trading emails with RINO image attachments.

Conservative Philadelphia Republican leader Kevin Kelly has a warning for the representatives he called “the squish seven.” Kevin wrote in an email:

“These guys are going to learn the hard way that the mushy middle, in today’s political world, is no place for a Republican who desires a future. You could literally carve more backbone out of a banana.”

“We hope that ‘if’ and ‘when’ our region’s Republican congressional delegation decides to vote for a clean CR to end the shutdown, they do it only in cooperation with a three-fourths majority of the House Republican caucus–not in an alliance with House Democrats. 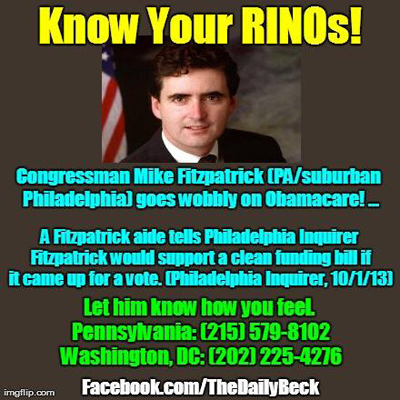 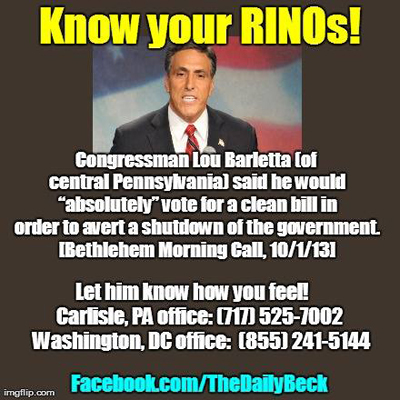 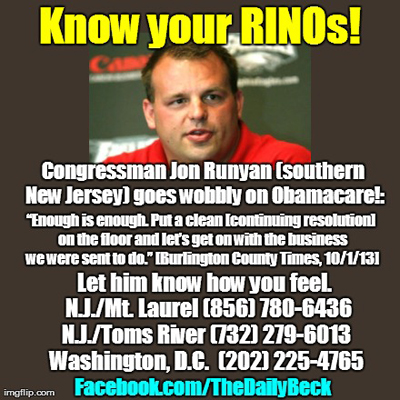 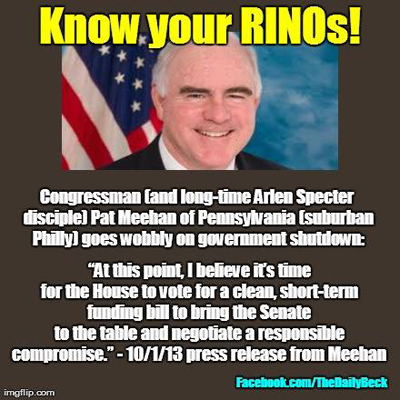 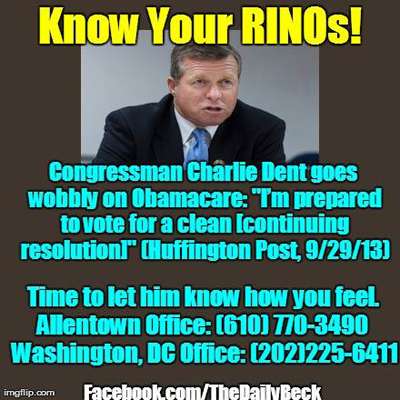