Their recent clinical trial, which used implanted brain electrodes and a motorized brace to restore movement in a paralyzed arm, aims to pave the way for a fully implantable, wireless medical device. 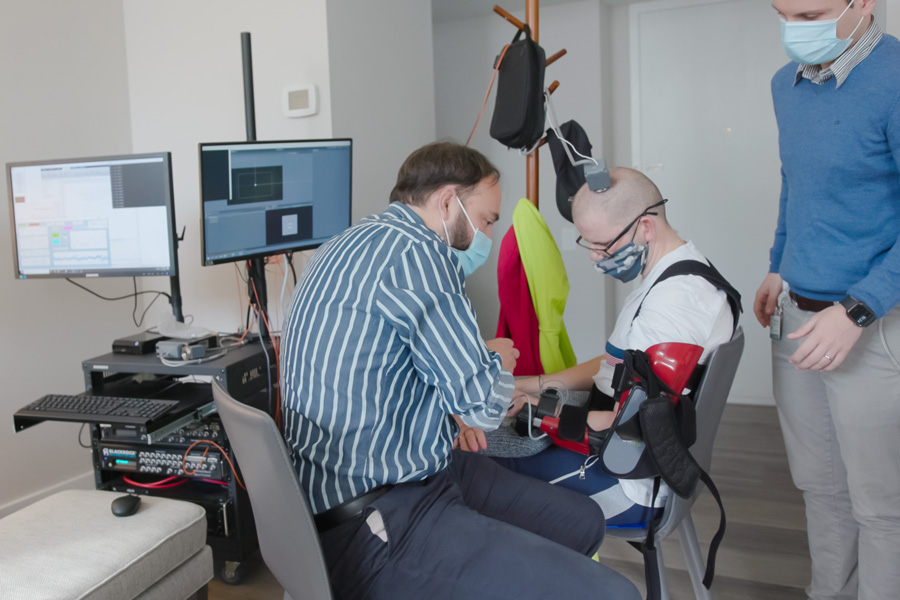 In early 2019, Aaron Ulland suffered a stroke, leaving the left side of his upper body paralyzed. Ulland is one of many stroke patients who are left with symptoms that impede their motor functions. Every year, more than 795,000 people in the United States have a stroke, according to The American Heart Association and the National Institutes of Health, and of them, approximately 75 percent are left with some kind of impairment.

In most cases, a stroke is caused by a blood clot that restricts blood and oxygen flow to an area of the brain. Without oxygen, brain cells in that impacted area begin to die, leading to impaired motor skills and cognition, as well as reduced or limited mobility. For this reason, stroke is a leading cause of long-term disability from a medical condition.

Recently, researchers at Jefferson have been testing a new scientific approach for improving patients’ long-term mobility. In a recent clinical trial, neurologist Mijail Serruya and his team discovered that implanted brain electrodes, when connected by wire through the skull to a computer, successfully help restore movement in a weakened or paralyzed arm.

When Ulland heard about this trial, he signed up, and in October 2020 he received the brain-implanted microelectrode arrays in the area adjacent to his stroke. For the next three months, Serruya worked with Ulland to train his control of the implanted electrodes in order to convert signals from existing brain cells into physical movement of a motorized arm brace fitted for his stroke-affected arm. In other words, Ulland’s neuromotor desires were recorded by the internal sensors, translated by the external computer connected to the sensors via wiring, and physically enacted by his brace-powered arm. 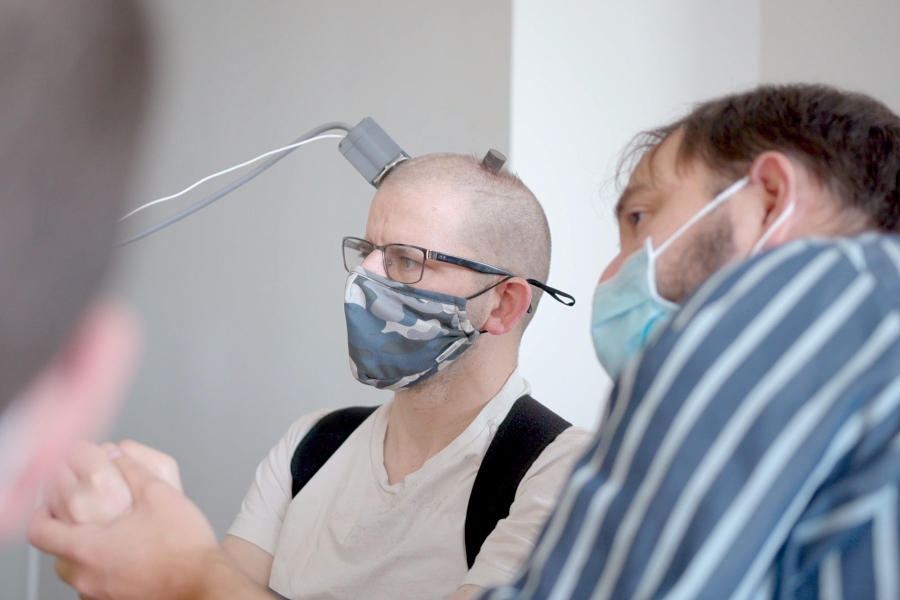 Though similar brain-computer interface (BCI) technology has been used prior to this trial, according to Serruya it has only been used on patients who have suffered severe motor impairment due to serious injury, but whose brains were not substantially impacted. About 15 years ago, Serruya says he helped implant brain electrodes in a patient named Matthew Nagle who had become quadriplegic after a spinal cord injury. The electrodes restored functionality in his paralyzed limbs, much like they did for Ulland. But, according to Serruya, Nagle had a “healthy” brain — one that would likely have a stronger ability to send out neural signals than that of a stroke survivor.

Because percutaneous devices cannot be used long-term due to increased risks, Serruya says, Ulland’s implants and external wiring were removed in January. Since then, Serruya has been tracking Ulland’s recovery and monitoring what arm movement he can maintain on his own. Serruya says Ulland has had continued improved arm movement and strength, even when not wearing the brace. “We sought to prove that the device would provide the restoration of movement,” Serruya says. “The fact that his arm strength increased was an unexpected positive outcome.”

According to Serruya, the success of the trial shows that a human brain impacted by stroke is able to tolerate implanted electrodes — a breakthrough Serruya says serve as proof of concept for a future, widely-available medical device that is fully implantable and wireless, and that would improve mobility in all parts of the body affected by a stroke.

“Independent movement will have functional benefits like being able to lift a fork to eat and health benefits like decreasing the frequency of skin infections and preventing the formation of painful joint contractures,” Serruya notes in the trial’s description. Moreover, it would allow folks living with permanent disability from stroke to live more autonomously and confidently, improving their overall quality of life.

“We want people who have suffered a stroke to live their lives as independently as possible,” Serruya says. “We are doing everything we can to help patients now. When a fully-implantable, wireless device comes out, I hope it will be accessible to anyone who wants and needs it.”