The Shortage of Black Male Doctors Is Medicine’s Real Emergency

Here’s what Temple and other Philadelphia colleges and universities are doing to put more black men in white coats. 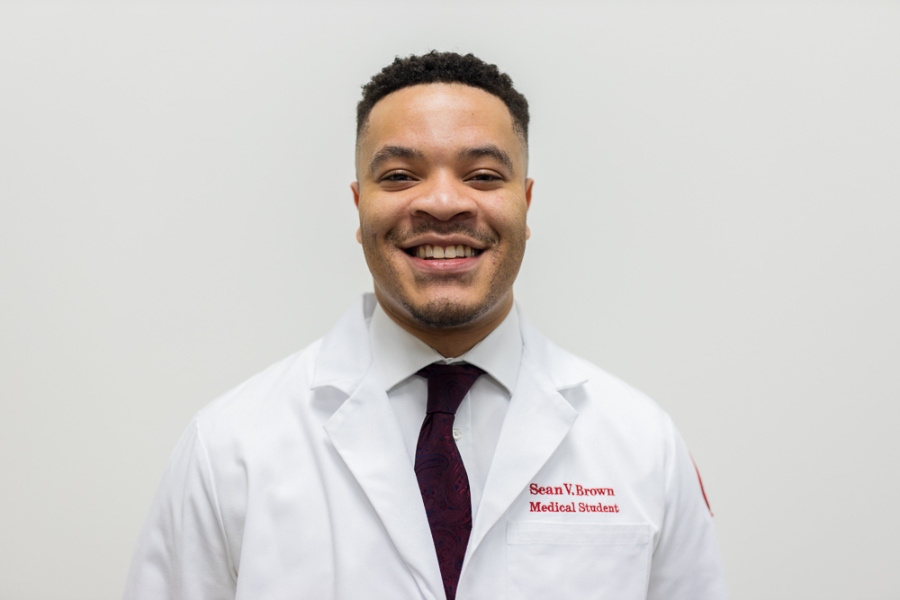 In 2018, Sean Brown was the only black male student to enroll in the Lewis Katz School of Medicine at Temple University.

When Sean Brown decided to pursue a career in medicine, he expected to be one of a few black men in medical school — he didn’t know he’d be the only one in his class.

In 2018, Brown was the sole black male student to enroll in the Lewis Katz School of Medicine (LKSOM) at Temple University. Now in his second year, Brown says he bears the weight of equal burdens: to encourage other black men to pursue careers in medicine and to survive the experience himself.

“I’m not going to lie, it feels crippling at times being the only one,” Brown said. “But at the end of the day, you’ve got to keep your eyes on the prize.”

The prize, in Brown’s case, is a Doctor of Medicine (M.D.) degree, an accomplishment that has eluded black men for decades. In 2015, the Association of American Medical Colleges (AAMC) released a report that sounded an alarm on the issue. The report found that while 1,410 black men applied to U.S. medical schools in 1978, by 2014, nearly 40 years later, that number had not increased; in fact, it declined to 1,337.

Today, black men account for a mere four percent of all doctors in the United States, despite the fact that black people make up 13 percent of the population.

Researchers say the shortage of black men in medicine has effectively stunted efforts to address health disparities and improve access to care for underserved populations. But the more obvious negative result of the lack of diverse representation in medicine is the message it sends to young black men who often abandon their pursuit of careers in medicine because they rarely see other black men in white coats. 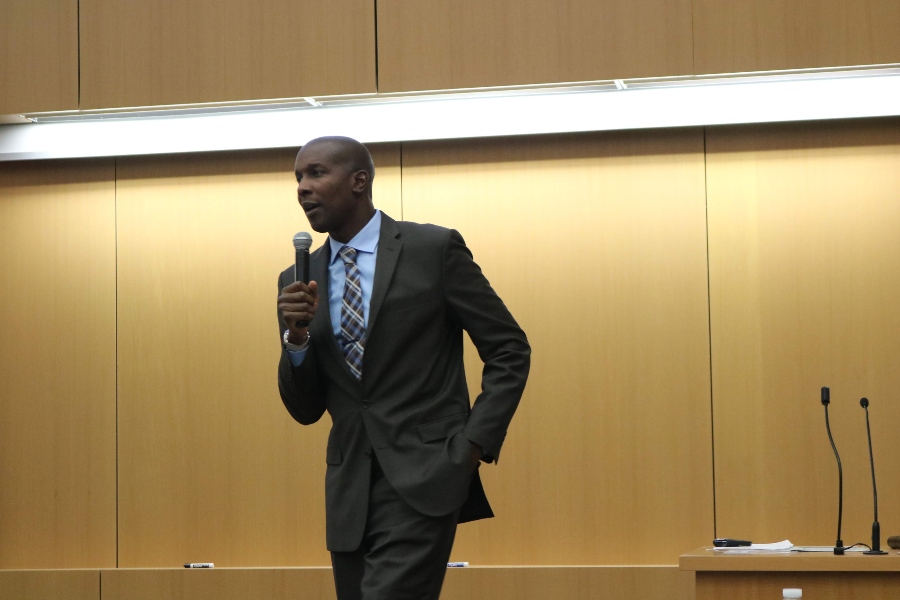 For students like Brown, having the support of black male doctors matters even more once you’ve enrolled in medical school. Mentorship often makes the difference in a student’s ability to complete the eight to 15-year journey to becoming a physician. So when Temple University hosted its second annual Black Men in Medicine symposium earlier this month, Brown was front and center.

The symposium invited black male physicians to share their wisdom with aspiring doctors in Temple’s undergraduate and post-baccalaureate programs, and included a keynote address from Damon Tweedy, author of The New York Times bestseller “Black Man in a White Coat,” who spoke about his experiences confronting race, bias and inequities in healthcare.

“I hear in class how it’s often more common for black people to get certain diseases and that when they do get these diseases, they tend to have worse outcomes. It just makes you think, why is that and what can I do about that?” Brown said. “Dr. Tweedy echoed a lot of the thoughts that I had. It was nice to hear from someone who could relate.”

Cameron Rutledge, a student enrolled in the LKSOM class of 2023, called the symposium a life-changing experience.

“I didn’t grow up seeing many doctors who looked like me. I’ve never experienced having a black male physician or seeing or learning from one, but I got all of that in one night,” Rutledge said. “To be in a room with doctors who’ve had these challenging experiences and to hear them talk about how to work up the medical ladder, that was something special.”

In his address, Tweedy pointed to the multilayered barriers that often prevent black men from pursuing careers in medicine, including poor early education options, negative media portrayals that lower black men’s expectations for themselves, stigma in the black community that can stifle career exploration, and lack of access to information and funding.

“There are a lot of barriers,” Tweedy said. “There are also a lot of black men out there who are really qualified but they need to be targeted much earlier.” 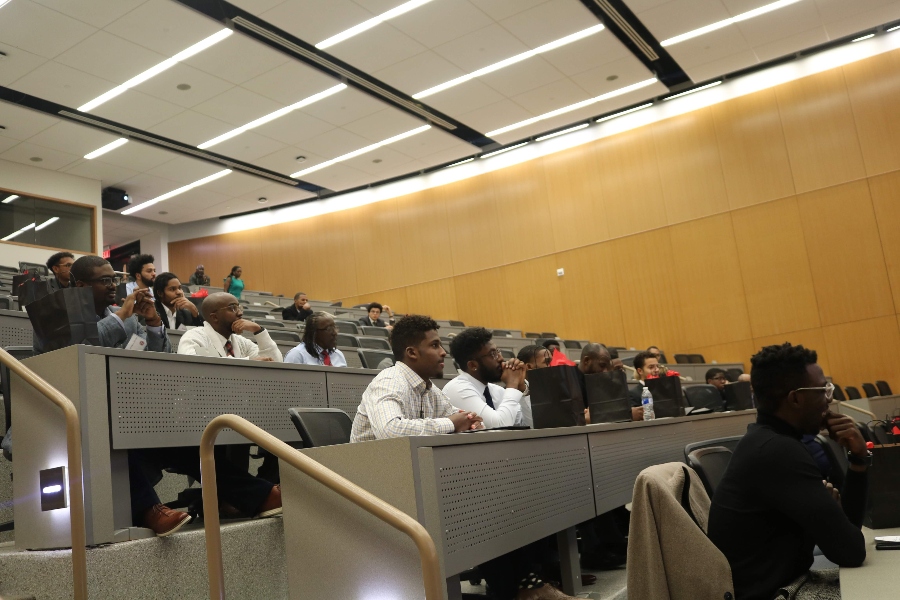 Temple is one of several Philly universities struggling to recruit black male students to its programs in medicine. The school’s annual symposium is one of several efforts that senior coordinator of diversity and inclusion Gabrielle Clark says are aimed at diversifying the school’s applicant pipeline.

“It’s a great opportunity to make it easier for students who are undergrads, or even as early as high school, to get exposed to careers in medicine and understand what it requires if that’s the career path they want to pursue,” Clark said.

This fall, Temple welcomed 15 black men into the LKSOM class of 2023; Clark says it’s the most diverse class in the school’s history. Still, the number of black men enrolled only accounts for a small percentage of total students enrolled at the school.

Combined, Temple University, the Drexel University College of Medicine, the Perelman School of Medicine (PSOM) at the University of Pennsylvania, and the Sidney Kimmel Medical College (SKMC) at Thomas Jefferson University have fewer than 150 black men enrolled in their current class of medical school students, despite some schools having class sizes as large as 800 students.

It’s a problem that each institution is taking slightly different approaches to solving.

Temple offers several programs aimed at recruiting diverse, aspiring physicians as early as the eleventh grade in high school, including an annual Health Careers Exploration Day that invites 40 Philadelphia-area high school students to Temple to learn about career pathways in healthcare and medicine.

At Jefferson, the eight-week pipeline program known as the Summer Training and Education Program for Underrepresented Persons in Medicine (STEP-UP), helps college juniors and seniors prepare for medical school applications, interviews and the infamous Medical College Admissions Test (MCAT). While the program welcomes all racial and ethnic minorities, the associate provost for diversity and inclusion at SKMC, Bernard Lopez, says the college “seeks African-American males as a priority.”

In May 2019, SKMC had two black male graduates. As of August, 17 black male students were enrolled at the college.

Drexel has a similar pipeline program aimed at recruiting “underserved students who have an interest in attending Drexel’s M.D. program.” Here, students must have already completed the pre-med coursework and the MCAT before applying. The program accepts students who are “socioeconomically disadvantaged and/or belong to groups underrepresented in the medical profession.”

Drexel’s College of Medicine currently has 64 black male students enrolled; this number includes students who dually identify as Hispanic or more than one race. Students at Drexel have also launched their own efforts to assist the college in recruiting more aspiring black male physicians.

At Penn, where black men represent five percent of the student body at PSOM, the associate dean for diversity and inclusion, Horace DeLisser, says the school is leveraging partnerships to increase its diverse applicant pool. It’s an approach that Clark believes is much needed.

“I think that the issue has reached a collective consciousness. Everyone doing different things to address the problem, but I think we’re doing different things in vacuums, and in isolation,” Clark said. “One thing I really hope comes as a result of this event is more community building and more collaboration between these different institutions.”

At PSOM, the Penn Access Summer Scholars (PASS) program invites students from Penn, Haverford College and Princeton University to spend two summers at Penn conducting research in a lab. Penn recently expanded this program to welcome students from five Historically Black Colleges and Universities (HBCUs), including Morehouse, Howard, Spelman, Oakwood and Xavier. Students who excel in the PASS program are permitted to enroll at PSOM without taking the MCAT, a benefit for many students who may not perform well on standardized tests.

“You have nearly 50,000 people applying to medical schools each year so the MCAT becomes a device for screening and whittling down the number of students,” DeLisser said. “While the MCAT may be useful for assessing academic performance and intellectual capacity, it’s not the sum total of what’s required to be a successful medical student or a successful physician.”

Another program at Penn, the Johnson Scholars Program, is a collaborative effort between PSOM and the school’s Black Cultural Center. The four-year program provides “a progressive set of tiered experiences, careful guidance and selected milestone achievements” to help undergraduate students from underrepresented groups in medicine become more competitive candidates for medical school. According to DeLisser, roughly half of the first cohort from this program are currently enrolled or are on track to enroll in medical school.

DeLisser says Penn is also working to develop pipeline programs that would reach out to diverse students during their high school years when he believes institutions like Penn have the potential to make the most impact.

“Until you’re able to deepen the pool of potential applicants at the collegiate level, you’ll continue to have small numbers and you’ll have a situation where Penn, Temple, Jefferson or Drexel will all be competing for a relatively small number of applicants,” he said. “I want to deepen the pool. Not all of those students will attend Penn, but we need to begin the mentoring and enrichment at 15 or 16 years old, years before they get to college, to increase those numbers.”

A recent study found that black male patients in Oakland were more likely to opt in to preventative health screenings when they were paired with doctors who were also black. The study underscores a sentiment that is often felt but rarely discussed: black patients don’t always trust white doctors. The complicated history between the black community and the medical community is laden with legitimate reasons for that distrust.

Keneolisa Ogamba is a research coordinator in the center of bioethics at LKSOM. He says he’s sometimes found it difficult to submit to care by white male doctors.

“I have definitely felt uncomfortable sometimes being seen by white doctors because a lot of times, I’m very concerned that if I give the full story of my circumstances, I will be judged. I fear that they may not necessarily understand my circumstances,” Ogamba said. “Having that in my mind it sometimes causes me to not always tell the full truth, which often hurts the outcomes because they can only help you based on what they know.”

Ogamba recently accepted an offer from LKSOM and will begin medical school there next fall. He hopes his degree will enable him to improve health outcomes and access to care in underserved communities.

Meanwhile, Brown is simultaneously pursuing a degree at Temple’s School of Business. When he graduates in 2022, he hopes to land a role in healthcare administration to steer future healthcare policy.

“I feel like the real important decisions happen in administration. I want to learn and understand the financial side of medicine and how insurance and policy affect people,” he said. “The ultimate goal is to help underserved people have a better chance at life.”