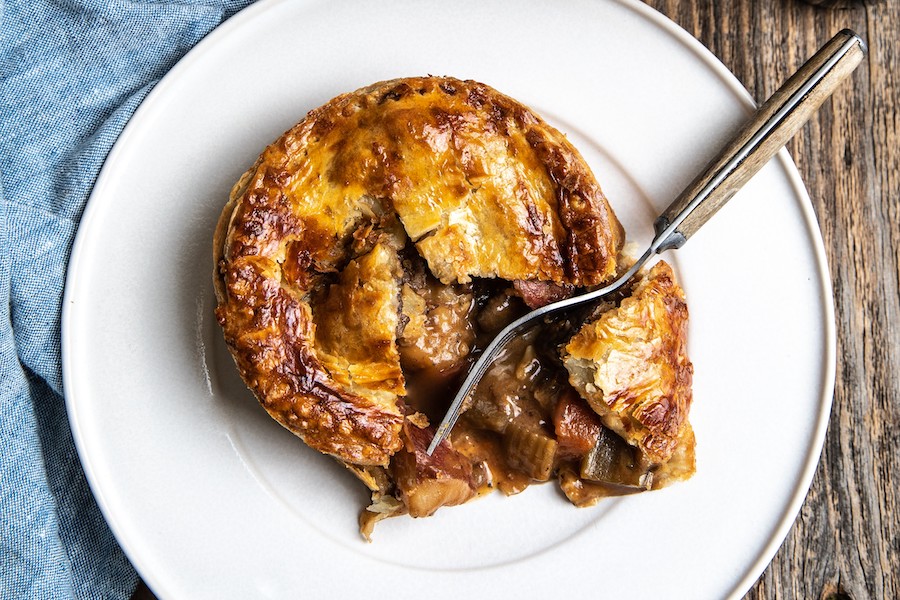 Buttery pastry, slow-cooked meat, gravy, and tender veggies all in a piping hot dish. We’re talking about pie — specifically savory pie, like chicken pot pie, shepherd’s pie, and British meat pies. Here, a guide to help you find all those stick-to-your-ribs goodies all over Philly and the ‘burbs. 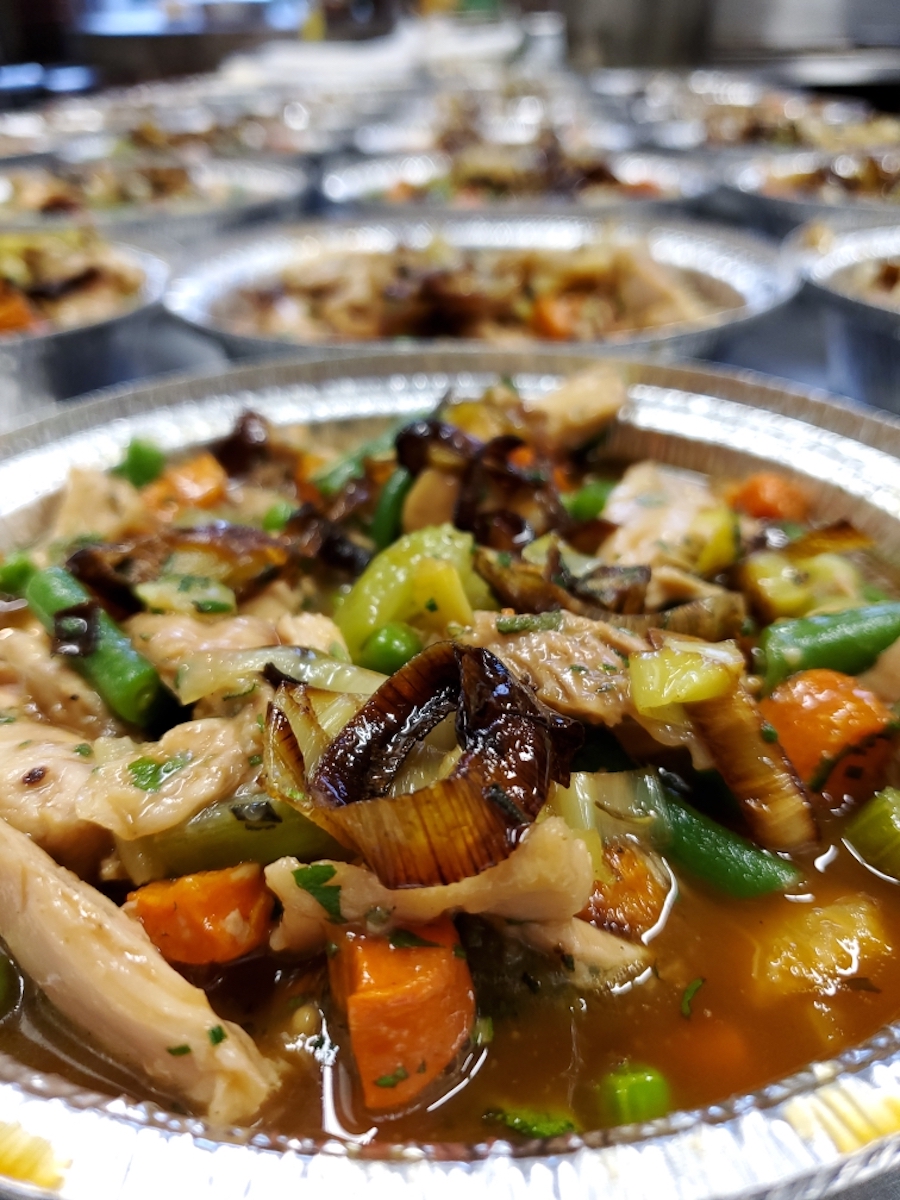 Balboa Catering, Frankford / Delivery
With events on pause, local caterers have gotten creative. Balboa Catering offers its hearty chicken pot pie for pickup in Frankford or local delivery. The seven-inch pie comes frozen and ready to bake in under an hour. 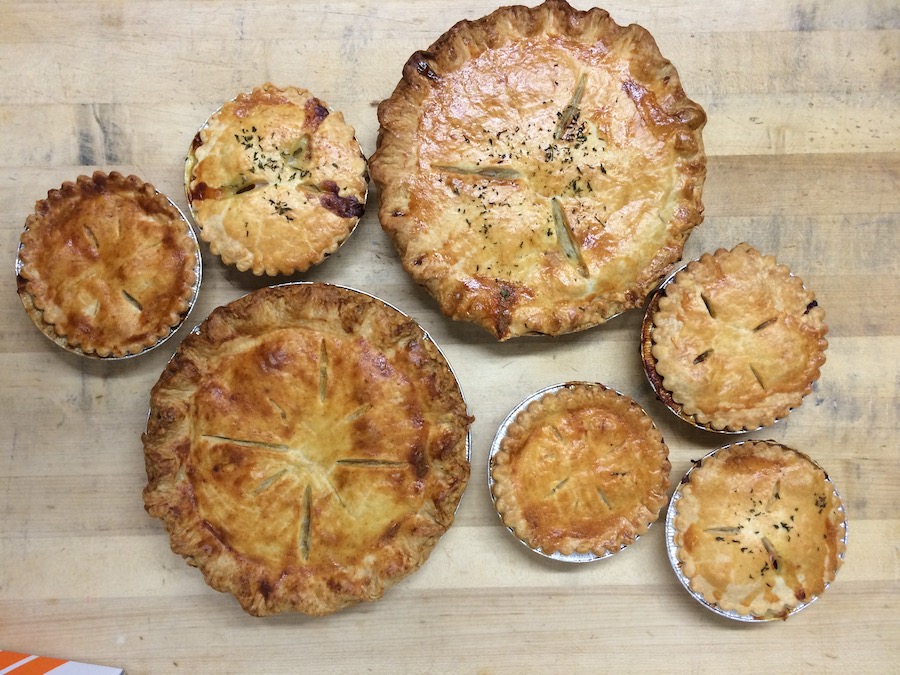 Frecon Farms, Boyertown
Berks County’s Frecon Farms makes its chicken pot pies — crust, gravy, and all — from scratch and brings them to farmers markets in Rittenhouse and Bryn Mawr. They come in 5-inch personal and 9-inch family sizes. Look for variations like sausage and spinach or steak and ale. 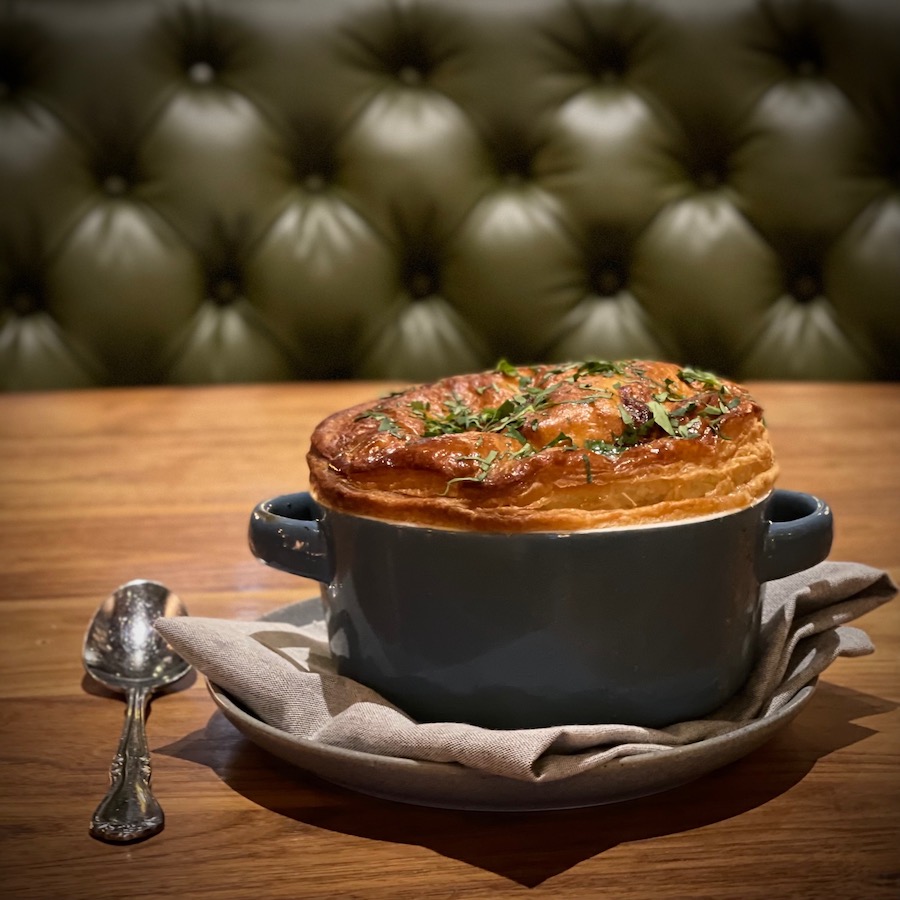 Harp & Crown, Center City
Everything is extra-glamorous at Michael Schulson’s Harp & Crown, even the humble chicken pot pie. Look at that crust, man. 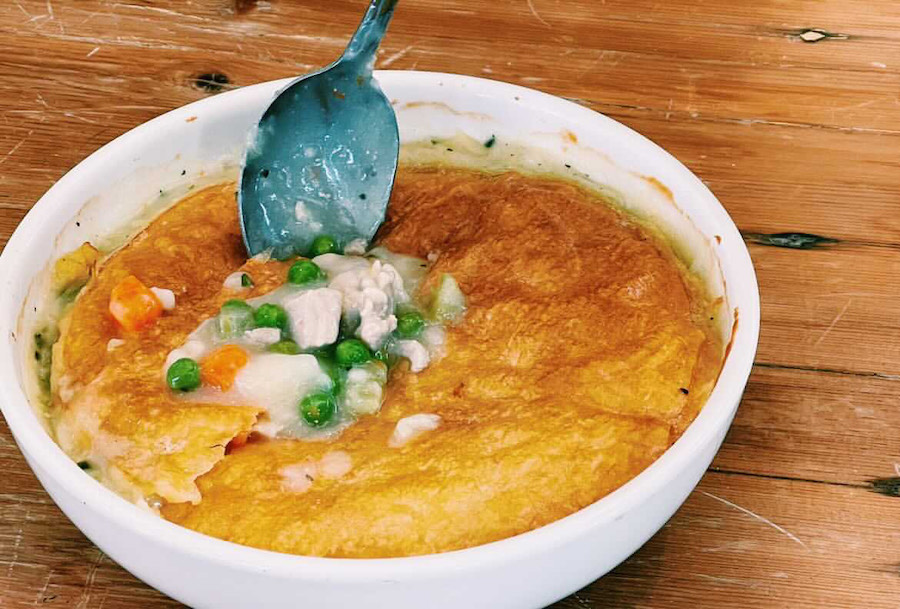 Tela’s, Fairmount
Like many of its prepared foods, local ingredients are the key to this neighborhood market’s chicken pot pies: Each one is stuffed with slow-cooked, antibiotic-free chicken, carrots, celery, onion and organic potatoes and topped with puff pastry.

Darnel’s Cakes, Old City
“Cakes” is in the name, so yeah, it’s a bakery that specializes in desserts and sweet things like cookies, brownies, pastries, and, you know, cakes. Also on the menu? Pizza pockets, spicy chicken sandwiches, and personal pot pies, baked in small tins so you don’t have to share with anybody.

The Dandelion, Rittenhouse
We’re all about this puff pastry–topped rabbit pie with oyster mushrooms and smoky bacon at Stephen Starr’s Brit-themed pub. But  you can be basic and get the lamb shepherd’s pie, too, if that’s more your speed. 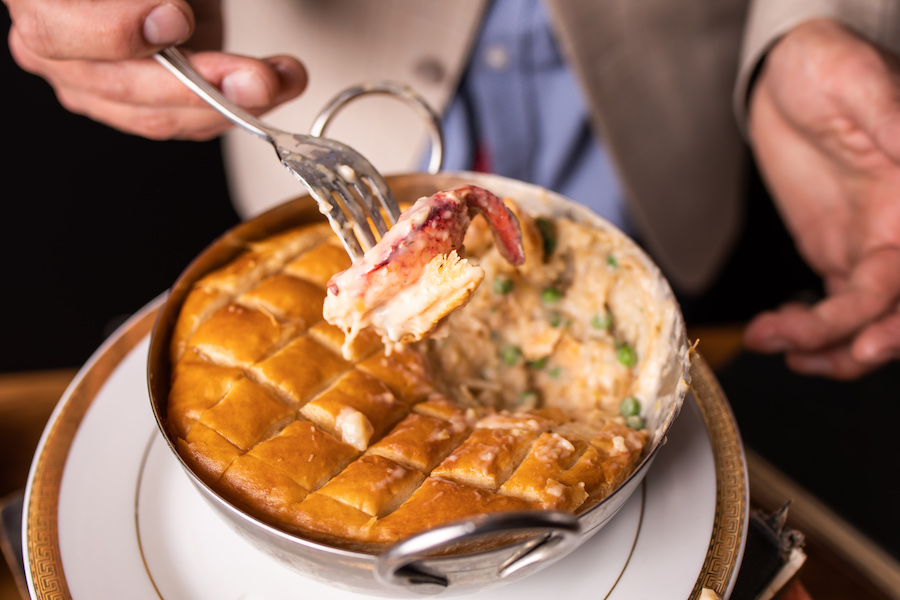 The Olde Bar, Old City
At Olde Bar, lobster and smoked scallops sub in for the traditional chicken. This Lobster Pot Pie — that also includes sherry cream and root vegetables — goes for $35. It’s available for dine-in and takeout. 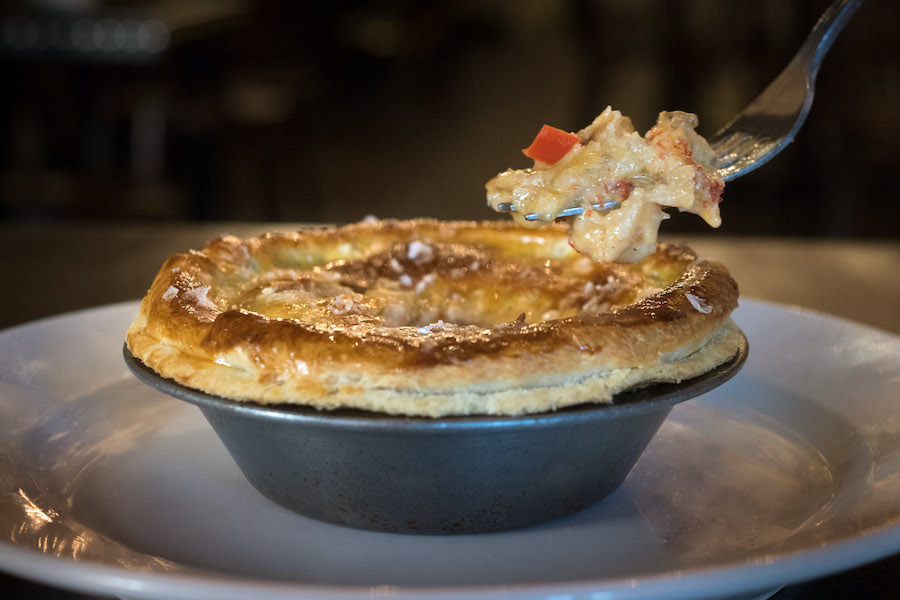 Rex 1516, Graduate Hospital
This pie’s been on the menu since the Southern-themed restaurant opened nearly 10 years ago—and it’s still a favorite. The kitchen mixes spicy crawfish étouffée with pecorino, pepper jack, and cheddar cheese, and tops it with a golden pie crust. 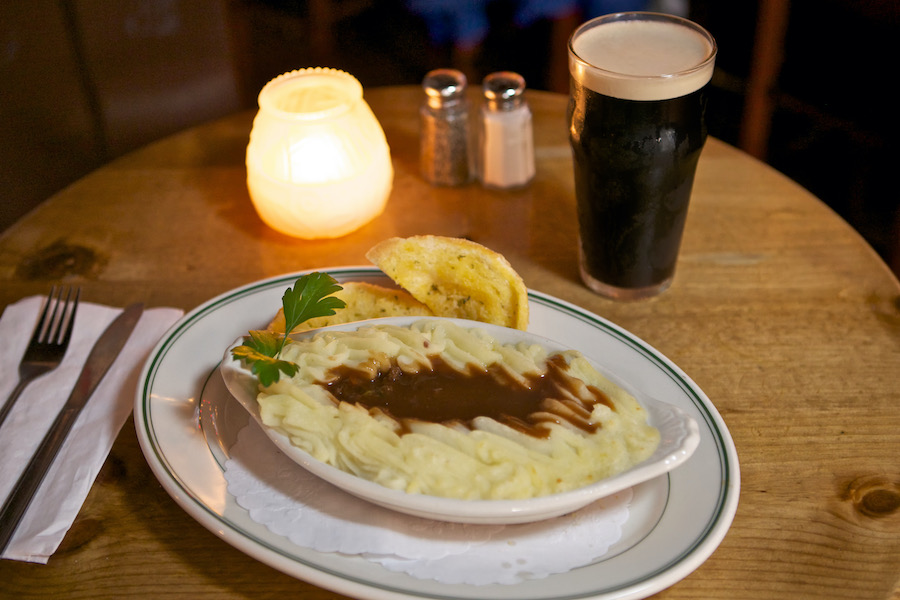 McGillin’s Olde Ale House, Midtown Village
One of the most popular dishes at McGillin’s has long been the Shepherd’s Pie. The Irish pub makes it with slow-cooked chopped sirloin and vegetables, covered with whipped potatoes, plus garlic bread for sopping up every last drop. It’s served piping hot in an individual crock. 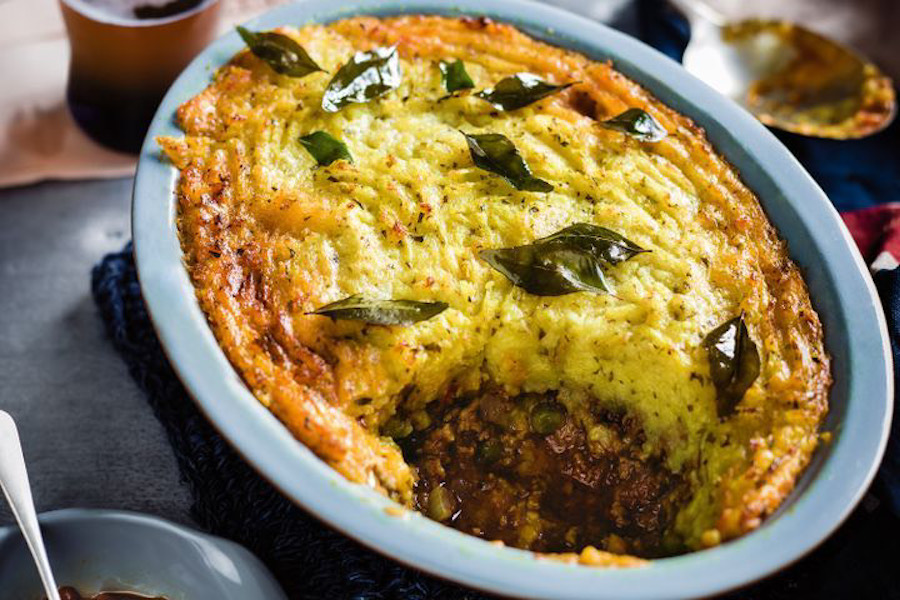 Little Susie’s Coffee & Pie, Fishtown
Little Susie’s specializes in hands pies, which is different from everything else on this list. But hey, they do a PRC pie (pork roll and cheese with a little mustard), and two of those in each hand work better than those hand-warmers you carry around this time of year.

English Offerings, Media
A British expat runs English Offerings, a takeout operation that offers a meat pie that involves lightly smoked, slow cooked beef in gravy with extra gravy on the side, and a pie with Welsh cheddar, onions, and potatoes. Throw in some mashed potatoes and a sticky toffee pudding for a filling English meal.