20 Places to Get Great Falafel in Philadelphia

Refer to this list the next time you’re craving these iconic crispy-fried Middle Eastern treats. 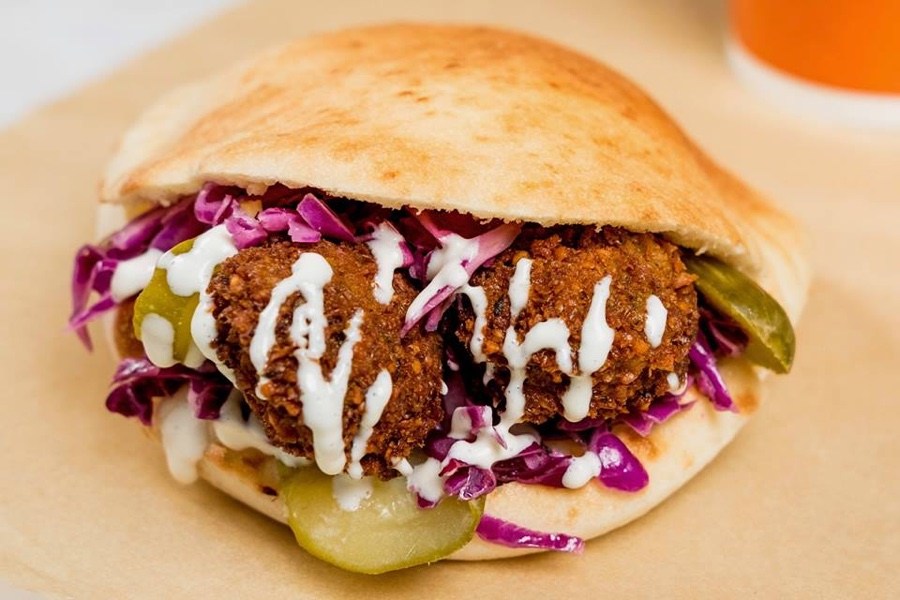 Whether you prefer them wrapped or stuffed or served on a platter with tabbouli, hummus and veggies, falafel is essential and delicious. There are pockets (heh) of the city with high concentrations of falafel joints, but just about every part of town has a place where you can score these craveable, crispy-fried bean balls. Here are our favorite places to get them in Philadelphia.

Kanella Grill, Center City
Kanella, which recently changed ownership, has been a go-to spot for Philadelphians — it’s friendly, welcoming, and the food is wonderful. As for the falafel: It’s hot, fresh and made to order.

Suraya, Fishtown
If you can get a table in Suraya’s lovely dining room or equally lovely, heated outdoor garden, you’re in for a treat. The menu is rotating so they don’t always serve falafel, but when they do, it is sure to blow you away.

Cilantro Mediterranean Cuisine, Queen Village
Cilantro offers all the Mediterranean standbys: hummus, pita, Greek salads and mixed grills. But their falafel is a particular standout, as is their Egyptian koshary, which is sometimes offered as a special.

Falafel Time, Fitler Square
It’s always falafel time, right? Here, you can put it on a platter with salad and hummus, stuff it into a pita or stack it high on a sandwich. There’s no wrong answer. 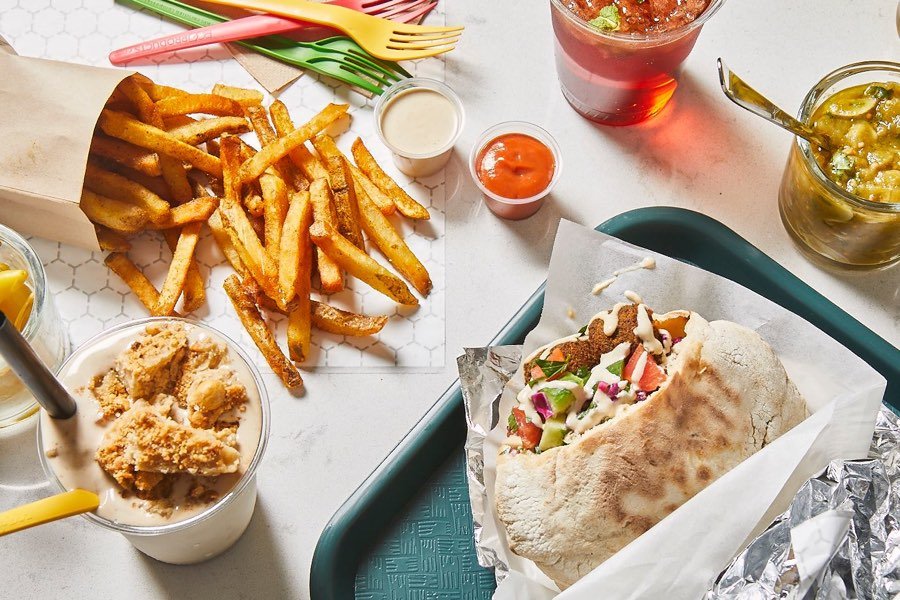 Goldie, Center City, Fairmount, University City and Fishtown
Michael Solomonov’s vegan falafel joint was a beloved (and very busy) lunch spot pre-pandemic, and it’s still cranking today. There’s no wrong order, whether we’re getting the falafel smooshed in a pita, served on a salad, or just as a “bag of balls” with a side of sauce. Check out their recently opened location in Fishtown, too.

Saad’s Halal, Spruce Hill
This spot just west of University City serves some of the best falafel around, and they’ve got a whole section of the menu devoted to ways you can order yours — with feta, hummus or in a sandwich.

Naf Naf Grill, Center City and Wynnefield Heights
Just about everything this Chicago-based chain serves — from their falafel to their chicken shawarma — is made fresh in store. Get those crispy chickpea balls in house-baked pita or over hummus, rice, couscous, or romaine. 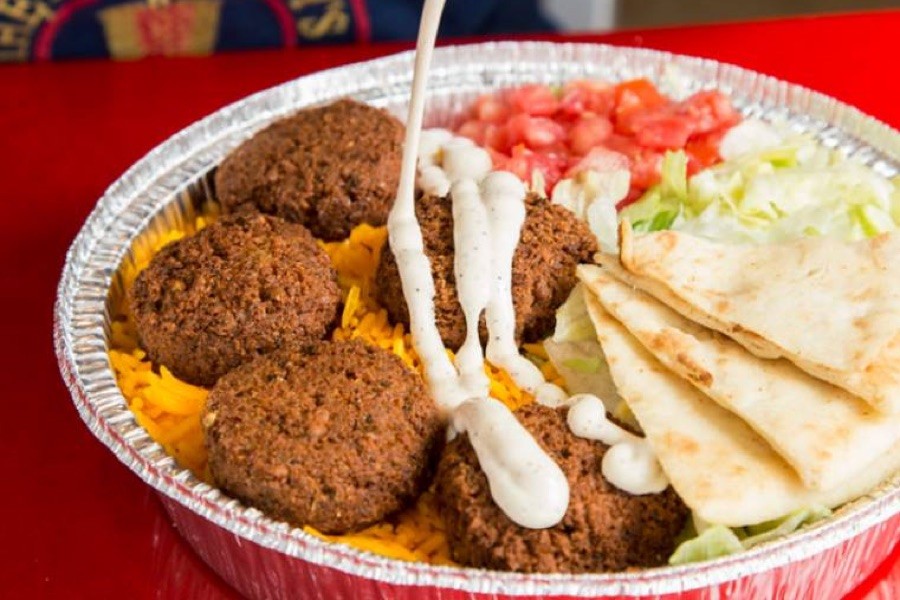 Halal Guys, Chinatown, Northeast Philly, King of Prussia and University City
Halal Guys started as a hot-dog cart serving Muslim cab drivers in New York, and now they’ve brought their straightforward menu — gyro, chicken and falafel served as a wrap-style pita sandwich or as a platter with rice and veggies — all over the world, including several locations in Philly.

Bitar’s, Italian Market
In business since 1974, Bitar’s had revamped their interior a few years ago to make more space for dining by moving their retail. But amid the pandemic, they pivoted back to prioritize their market offerings. You’ll want to try their unique take on falafel, which is grilled till crisp rather than fried. We like it in the Owner’s Favorite, a mix of falafel, gyro meat, veggies, and harissa-spiked mayo.

Manakeesh, Spruce Hill
One of three excellent spots on this list located on a two-block stretch of Walnut Street just west of the Penn campus, Manakeesh’s menu goes beyond Lebanese basics with their namesake flatbreads, fruit cocktails and an extensive selection of Middle Eastern pastries — but their falafel is also fantastic.

Paprica Grill, Washington Square West
This Turkish spot won a Best of Philly for its kebabs, so make sure you check them out when putting in your order for falafel. The menu also includes khachapuri-esque pide flatbread topped with cheese and soudjouk (dry sausage). 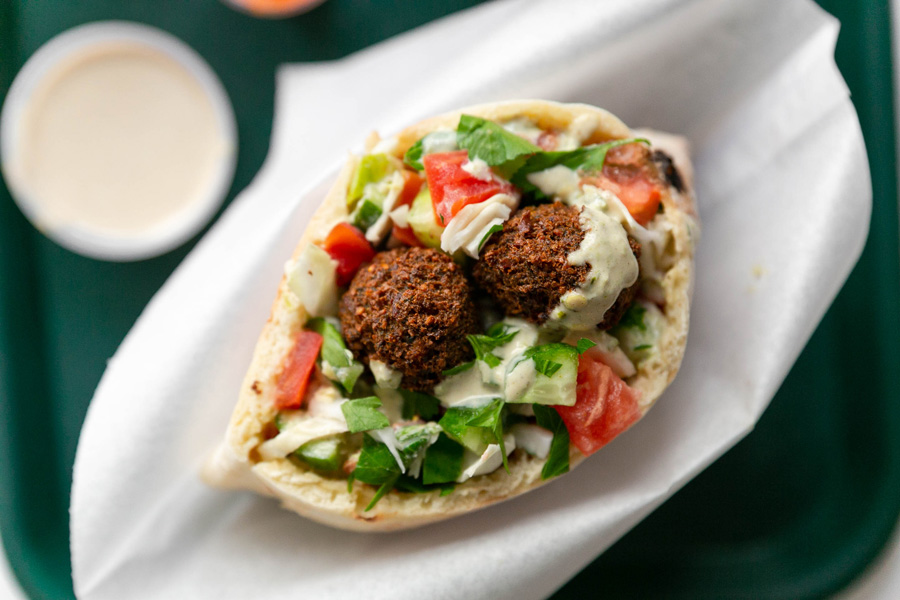 Makkah Market, Spruce Hill
Hit up Makkah during the day for bulk olive oil,  fresh-baked pita bread or super-cheap spices. And pull up to their window any time of night (or day) for prepared foods. That’s right: 24-hour falafel in Philadelphia is real.

Alyan’s, Queen Village
This no-frills Mediterranean spot on South Street is the perfect place to grab a falafel platter (and some very creamy hummus). 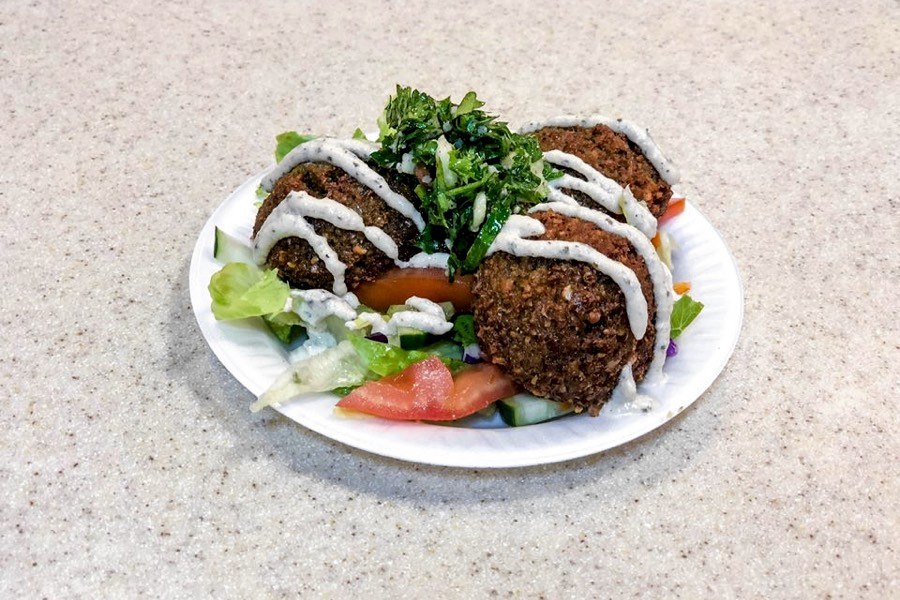 Kamal’s, Market East
Reading Terminal Market’s resident Middle Eastern vendor offers a sweet option for a veggie-ful meal. (And that’s not easy to find among the cheesesteaks and roast pork sandwiches there.) Choose three, four or five items from the veggie list, and be sure to make one of them falafel.

Sahara Grill, Midtown Village
This unassuming joint just east of Broad on Walnut Street is a well-kept secret among Center City diners. Our favorite is the falafel sandwich with a fattoush salad on the side.

Apricot Stone, Northern Liberties
Syrian-born Armenian chef Fimy Ishkhanian introduced the Main Line to Middle Eastern fare between the ’80s and the ’00s before opening this location on North American Street in 2016. Amid regional classics with an Armenian bent, she sells crisp falafel in pita with rice pilaf and salad or on its own with tahini.

Liberty Choice Market, Kensington
Liberty Choice offers lots of basics to stock your pantry as well as pizzas, Strombolis, Italian entrees and much more. But you’ll come back time and time again for their crispy, affordable falafel platters and sandwiches.

Magic Carpet, University City
Magic Carpet runs not one but two vegetarian food carts on the Penn campus, one at 36th and Spruce, and the other at 34th and Walnut. You can order online for delivery ($10 minimum) or pickup, and dress up your baked tofu, seitan or tempeh with falafel on the side.