And sharing what he's learned about Southern barbecue with the Philly area. 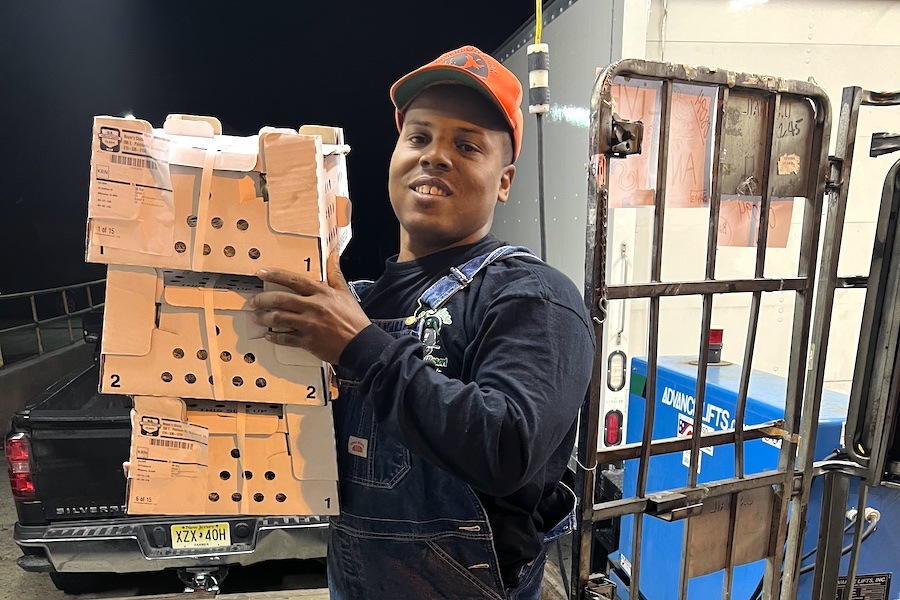 Behind the Line is Foobooz’s interview series with the people who make up Philly’s dynamic food and beverage scene. For the complete archives, go here.

It’s possible you’ve followed the wafting scent of smoke to a street corner in Philadelphia and found a man pulling an entire smoked pig off of a smoker. Congratulations, you’ve encounter Kyle Smith. Smith owns and operates Smith Poultry, a poultry and pig farm based in Williamstown, New Jersey. He’s known for his egg CSA — providing members with five dozen eggs a month — as well as selling vegetables, turkeys, and chickens at local farmers’ markets (and teaming up with and Farmer Jawn). But, more and more, Kyle is becoming known for barbecue as he partners with Philly food businesses like Riverwards Produce on pig roasts. We spoke about how he got started in farming, the legacy of barbecue in the South, and where he learned to smoke a pig.

I first connected with the idea of providing people with fresh food when … I spent summers with my grandfather in South Jersey. We would wake up early in the morning, go pick up vegetables from farms, take them into Atlantic City to the senior citizen homes and do deliveries of vegetables, eggs and sweet potatoes. Back then, especially in the Black community, a lot of people didn’t really go to grocery stores. So there would be people coming into town. Like, my grandpa was a collard green man, so in the fall he would come around and he would have a bell ringing on the side of this truck and he’d be calling out “Collard green man! Collard green man!” We were like the middlemen of fresh vegetables, so we’d get it from farmers and then sell it to people.

But I didn’t start farming until … I got fired from a job working in an auto-body shop, and in that moment I was like, “What do I need in my life so I can be in control?” And so I started doing meat birds. I think I ordered like 25 birds in the mail, and I raised them up and killed them myself, and that was how it started. I just wanted to be able to say that I had something of my own.

I’m not just a farmer, I’m also … in the Air Force. So I farm in the morning, at night and on the weekends.

On the farm we have … about six acres of land on my house, and I lease another 10 acres next to me, and then I work with another farmer who has about 57 acres. There are probably about 800 meat birds, about 400 or 500 egg birds, and maybe between 50 to 70 pigs.

Barbecue became part of the business during COVID when … I had maybe 80 pigs out there in the field and business kind of died off. And the price of feed went from $325 for a ton to $600 or $700 for a ton. So I had to figure out what the hell I was going to do with all these pigs and nobody buying them. That’s when I started cooking them.

My family is from … North Carolina, and my dad’s family is from South Carolina. So [barbecue] came from me traveling, you know, not back in time, but trying to get closer with my ancestors and the things they did back in the day. I wanted to explain what I’ve learned about cooking pigs and how that connects with the history of Black farmers and plantations and slaves.

The first time I cooked a whole hog was … with a buddy of mine, Jon Jackson from Comfort Farms. So that was like the opening of that experience. I got to travel and talk, and put my hogs on the road. And then this summer we took a hog down to South Carolina and it has evolved into this thing of like learning and teaching about the history of these traditions. Growing up in the garages of New Jersey, I heard about all these farm animals and cooking whole hogs, but no one really did it to the extent where we were like staying up all night.

After that experience I … saw the amount of work and time that goes into it. I was amazed. Today everything is so fast and on-demand. Whereas back in the day, they didn’t have the ability to say, “Oh we want to have pork chops,” because they didn’t have refrigeration. So you had to cook whole hogs.

One thing I always explain to people about where I’m from is … you know how you have a last name and that’s like who you are? Growing up in a Black neighborhood, it would be like “Who are you? Where are you from?” and I would say, “Well my family, they moved, they’re from New Bern, North Carolina.” So I’m not a North Carolina native, but having a sort of “second last name” that I could call out, it was always really special to me.

In the future, my goal for my kids is for them to … always have the farm to fall back on, so it can be their sabbatical, their safe place. I want them to know that they can find refuge here if they need to or want to.