Why Your Burger and Fries Cost $24 at Southwark

A breakdown of the labor and ingredient expenses behind Southwark's cheeseburger explains how inflation and supply-chain issues impact the price tag. 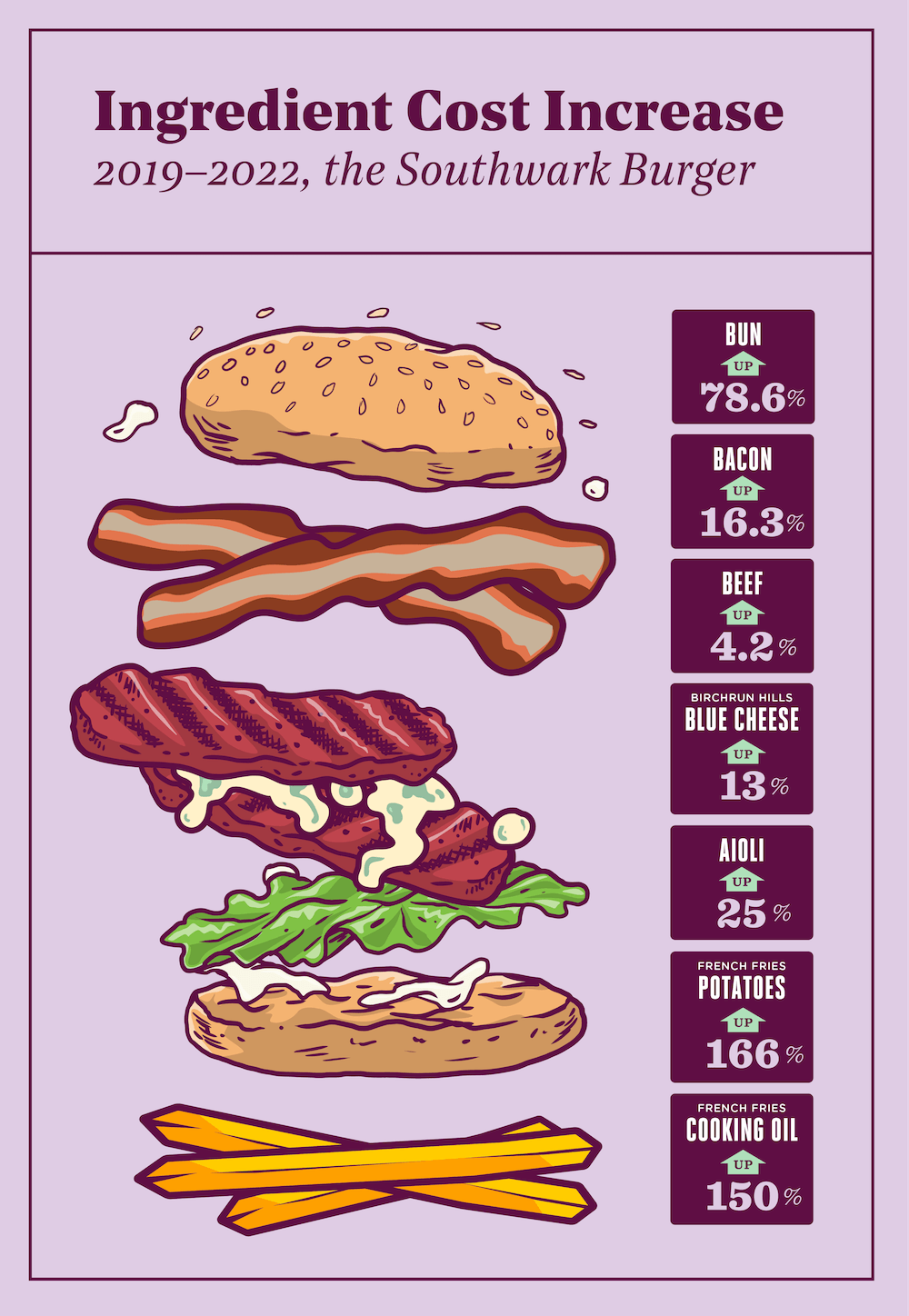 Between 2019 and 2022, the price of Southwark’s double cheeseburger has gone up 41.2%, from $17 to $24. The rising cost of ingredients offers some clue as to why the restaurant is charging more than they did three years ago, but not the entire story. / Design by Jamie Leary

There are several topics that I’d like to see restaurant guests and restaurant owners discuss more. How to best cancel a reservation, for instance. Or how health insurance at restaurants works. Right now, though, the subject being lamented most in group texts and angry Yelp reviews is menu prices. Inflation-related price increases are affecting everyone in the restaurant ecosystem. But, beyond diners’ complaints, the details are rarely being discussed out in the open. If you ask the right people the right questions, you can learn a lot. In my case, I talked to the owners of Southwark in Queen Village, Marina de Oliveira and Chris D’Ambro, about the rationale behind how they price their double cheeseburger in 2022: What goes into the cost of each ingredient and how does labor get factored in?

Let’s back up for a moment. When examining how Philly restaurants and diners are being affected by rising costs, the humble burger (with fries) provides an unusually good microscope. Restaurant burgers typically contain four or five components, most of which are in high demand by chefs and home cooks alike — bread, beef, bacon, eggs (for aioli), potatoes and dairy. Also, burgers have long existed on menus in Philly, making it easier to track changes in price over time.

Southwark’s burger has always weighed in at six ounces of meat, and always been topped with grilled onions and crisp bacon, plus a crumble of blue cheese and a swipe of aioli. What’s changed is the price. At the end of 2019, Southwark’s burger with fries was priced at $17. Now, in 2022, the same dish will cost you $24. 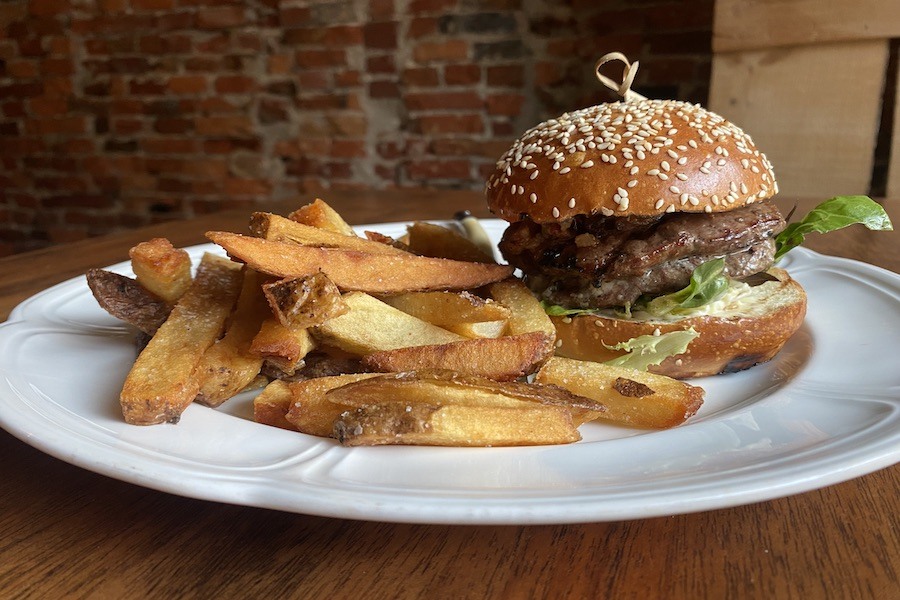 To understand the reasons behind the jump from $17 to $24, D’Ambro showed me a Word document with ingredient price comparisons between 2019, 2020 and now. As he, de Oliveira and I pored over the document together, D’Ambro was surprised by the increase in particular ingredients. The prices for the dry-aged beef from DeBragga and their locally sourced blue cheese, for example, haven’t surged so significantly: Between 2019 and 2022, the price of beef per Southwark burger increased by 4.17% and the price of cheese per burger increased 13.3%. “We use about a half-ounce of cheese per burger, so this isn’t that big of a jump,” D’Ambro said.

Other ingredients tell a different story. “I kind of knew the flour would be a thing,” he explained. “But the potatoes were the shocker to me. The oil I knew was high, but I didn’t know it, like, nearly tripled.” When you look at the numbers for ingredients like flour for burger buns and oil for French fries, it becomes clear that the price of the ingredients that most directly connect to global supply chains have all exploded in recent months.

“Things that need to be imported have a higher price than they did before because of these global supply chain disruptions related to COVID,” says Rhiannon Jerch, assistant professor of economics at Temple. “There are also really volatile energy prices right now, particularly in Europe because of the war between Russia and Ukraine. Things that import internationally, or which are connected to international markets, are facing higher energy costs and supply restrictions, which contributes to inflation.” Wheat, for example, is a major export from Ukraine. When Russia invaded, flour prices jumped because that flow of raw ingredient slowed significantly.

These global forces touch every food business, but not everyone has chosen to deal with increasing prices in the same way. Sue Miller, co-owner of Birchrun Hills Farm and maker of the blue cheese on Southwark’s burger, said that she and her family have made the decision to only raise prices by five percent for farmers’ market and wholesale customers. They’ve dealt with price hikes across their production, from boxes used for shipping cheese, to diesel and even seeds for crops like the oats and corn they need to feed their farm animals.

For Southwark, the price of blue cheese has gone up about 13 percent since 2019, but Miller says that increase in price doesn’t come from Birchrun. “We’ve absorbed a lot of these costs,” Miller says. “We’ve never raised the prices for our distributors, so the [13] percent increase in price that Southwark is paying, that’s not going to us. That’s the distributor charging more to pay for delivery and their operating costs. We agonized over the decision to raise prices [by five percent] at farmers’ markets for the first time in 14 years.”

Miller explains that the decision to maintain low costs is largely driven by their desire to prioritize connection with their customers over profit. To stay operational, they’ve introduced new products, and now offer Friday evening happy hour at the farm in Chester Springs, where people can stop by and enjoy wine and cheese with a view.

Back at Southwark, the burger’s $24 price tag is a product of more than simply the cost of ingredients. To understand the burger’s price, it’s helpful to look holistically at other changes happening at the restaurant over the last three years.

There was COVID, of course, during which D’Ambro and de Oliveira transitioned to outdoor dining, patio barbecues, burger nights and many more mini-concepts. They closed two Queen Village restaurants in the middle of 2021, Gigi Pizza and Olly — both had opened just before the pandemic in late 2019. D’Ambro and de Oliveira also shuttered Southwark for almost a year to renovate the space, evolving the connected restaurant, Ambra, into an Italian fine-dining experience (which reopens in early October).

D’Ambro and de Oliveira bought Southwark from the restaurant’s previous owners back in December of 2015, and they opened their own version of the place only about two months later, in February 2016. The two funded the project with a personal loan, which put them under significant pressure to open as quickly as they could. Five years later, after nearly a year of pandemic pivoting, they were faced with the question of whether to renew their lease. In that moment, they doubled down and used the timing of the lease decision to negotiate with their landlord about improving the building. After that, they spent about a year renovating the restaurant. 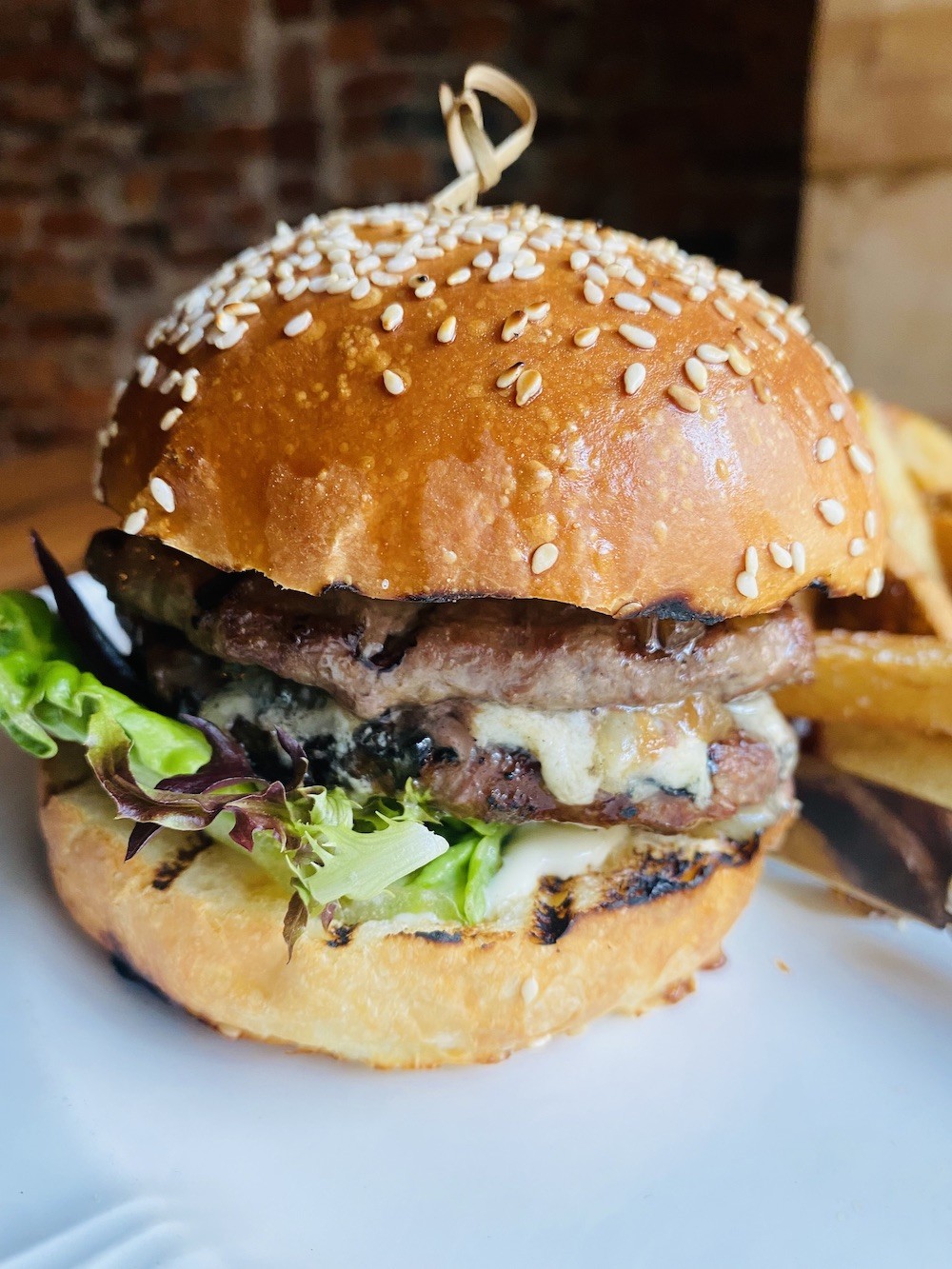 It’s rare in any industry to have a year away from running your business, but it was transformative for D’Ambro and de Oliveira. “We’ve done the week-to-week, trying-to-survive thing, and it’s grueling,” de Oliveira tells me. “Shutting down helped us get out of that mindset.” D’Ambro agrees. “When you’re in the middle of it,” he says, “you can’t, like, close for a week to fix all the plumbing in the bar or buy a new air conditioner. But when [we closed] we were able to take a step back and look at what makes this place what it is, and get better at that.”

During this moment of reflection, Southwark decided to eliminate the last two hours of their evening service, during which they used to cater to a late-night crowd of neighbors and industry folks. Closing earlier has allowed them to focus more on the dining room, which shuts down at 10 p.m. these days. Before COVID, the burger was only available via the happy hour and late-night menus. Now, it’s on the dinner menu.

That shift from bar food to dining-room item required some changes to the construction of the dish itself: “The burger has more shit on it than the duck entrée,” D’Ambro explained. “It used to really disrupt the kitchen, so we had to streamline it, so that it would work with the flow of the kitchen during dinner service.” The kitchen split the six-ounce burger patty into two smaller ones which could be grilled rather than cooked in a cast-iron skillet. The smaller patties allow for a faster cook time, and the current burger now takes about seven minutes to cook. It used to take closer to 11 minutes.

Moving the burger from the bar menu to the regular menu also followed a larger trend in the restaurant’s finances. Before COVID, the restaurant did about half its sales in the bar area, and half in the dining room. Now, they estimate that it’s closer to 70 percent dining room, 30 percent bar. “When the burger was only available in the bar, we were selling that much more alcohol,” D’Ambro explains. “The labor on the alcohol is way less, so you make up for charging a couple dollars less for the burger. It’s like a combo deal, almost.”

As an item on the dinner menu, D’Ambro says that the burger must cost more than it did at the bar, in order to cover additional labor expenses. “We also pay to be here,” D’Ambro says. The ingredients for the burger currently cost the restaurant about $6 — in 2019, the total ingredient cost per burger hovered around $4.42 — but that doesn’t include everything that goes into making it appear on your plate. “That $6 is, like, the easiest part of this whole equation. Gloves used to be $37 for a 1000 count box. Now they’re $96. A lot of our vendors have added on or raised their delivery costs, so that doesn’t show up in the price of the ingredients, but it’s there. [The ingredient price alone] doesn’t account for utilities, or our rent, linens, all of that stuff.”

Ultimately, D’Ambro says, the pricing of the burger is in part a reflection of the way the restaurant values itself. “Whatever people’s perceptions are of what a restaurant should charge, unless they’ve successfully run a restaurant, their opinion to me is zero,” he says. “I would say that 80 percent of the people who come in here have been before, and I think people know that it’s going to be expensive, but there’s a professional server and a well thought-out wine list and cocktail list and the food is local and not mass-produced, and handmade. Like it’s not cheap, but it’s going to be worth it.”