Come to this neighborhood BYO for baklava, manti haloed in yogurt, and bright mezze you can share with a date. 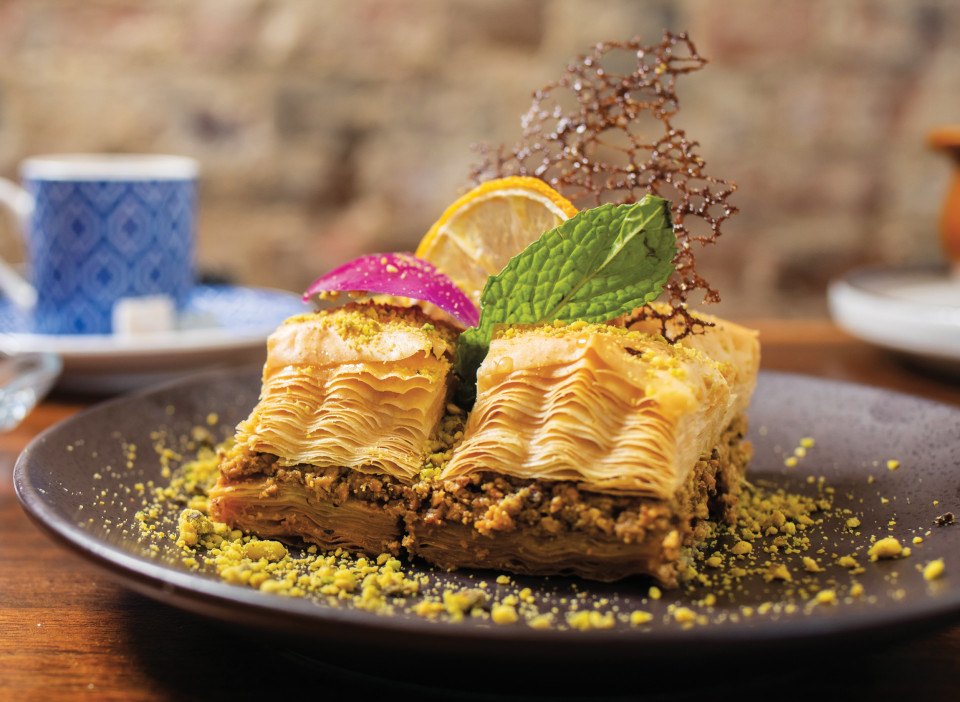 Step into Pera and you can feel your blood pressure drop. It’s the sun through the corner windows, maybe, or the high ceilings and the track lighting precisely picking out the cool blues of the ceramics decorating the walls. Come inside off North 2nd Street any day of the week, and something in you just slows.

It’s a passion project, this place, opened by two buddies from Turkey who met in Philly. Mehmet Ergin and Eric Tunc didn’t know each other when they moved here but ended up renting an apartment together in Point Breeze, going to school together, working in food service together. And now, they’ve opened their first restaurant together. It’s exactly what they envisioned — full of streaming natural light, memories of home, and baklava. I love Pera’s baklava. Sure, maybe dessert is a weird place to start when discussing a restaurant with a savory menu that goes on for days. But the meal’s end warrants obsession. Pera’s tightly compressed stacks of phyllo hold together ground nuts touched with cinnamon, the damp strata of syrup-soaked layers leaking sweetness like they’re crying sugar. Each piece is two bites. The second is better than the first, because the former is all about anticipation and the latter is pure gluttony.

Order This: Flights of mezze, a plate of manti, doner and iskender for the table. And absolutely save room for the baklava.

Before baklava come mezze. In nearly any combination, these abstract triptychs arrive on divided plates — brick red tomato and hot pepper ezme spiked with pomegranate, feta and olives crowned with a tangle of herbs and flowers, tabouli, heavy on the parsley, like a jungle seen from above.

The manti are a whole community of tiny dumplings, each like a curled index finger, stiff-skinned and filled with ground lamb. Arranged in a perfect circle on the plate, they’re haloed in yogurt, speckled with chili flakes, and striped with orangey-red doodles of hot pepper oil. From the grill, there are a dozen sandwiches and wraps — beef and lamb and chicken folded into pitas or put between bread. But almost everything benefits from a plated incarnation — they’re prettier that way, certainly, but it also make Pera’s subtleties easier to appreciate. Take the beef and lamb doner, for instance: The bits shaved from the outside of the spit taste almost caramelized by the heat, while the slabs from inside are tender, with a salt sting that holds its ground against the yogurt I slather on everything.

Pera has an upscale casualness about it — an easy, come-as-you-are neighborhood-BYO feel, packing in the locals on a Wednesday night and filling the tables with artful plates. It’s a place meant for breathing out. For unwinding over feta-stuffed-pastry, manti, and a chilled bottle of white from home. And in that, it succeeds beautifully.

Published as “Baklava and Breathing Out” in the September 2022 issue of Philadelphia magazine.