Good Luck Pizza Co. Is So Much More Than Just Pizza

Order the meatballs and lots of cocktails. 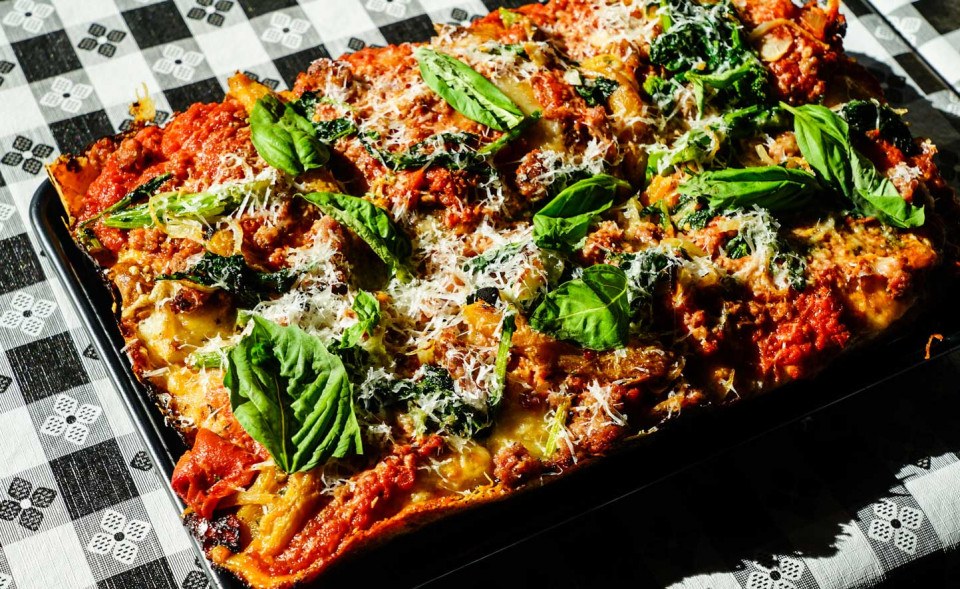 In the dining room at Good Luck, I looked around and wondered where all the people were. It was a Thursday night. Not early. And the place — smallish and darkish, the walls covered in framed photos and knickknacks, like your grandmother’s sewing room turned into a nightclub — was half-empty.

Pandemic, I thought; that’s the reflex now, still to blame for everything from hangnails to traffic jams. I didn’t think much of it. I was waiting for friends.

At the bar, they shake whiskey and amaretto, lemon and egg whites, and call it the Sour Godmother. They make a bourbon Negroni just right for this place — dark and sharp and surprising. The name would make you think this is a pizza joint, and it is, kind of. There’s pizza on the menu (thick-crusted Sicilian-style pies, airy and crisp from a long, patient fermentation), and it’s good. There’s the Spicy Nonna, with its hot honey and soppressata, a four-cheese red-top that eats like it wants to be the menu star. But the potato pizza, with shaved Yukons, red onions, cheese, and dollops of pistachio pesto you can smear with a spoon, is more interesting than all of them. Potato pizzas always are, when done well. But pizza isn’t really the reason to come to Good Luck. The kitchen does so much more.

When my friends finally show up, we order more drinks, a bowl of fat green olives and white beans stung with brine, meatballs capped with ricotta, a silky bucatini carbonara that I remember mostly for the absolutely perfect texture of the pasta. The wings come with a sour/sweet agrodolce sauce made with Calabrian chilies cooled out by a side of garlic ranch that’s junky in just the right way. We tack on a pie to keep things going, but it’s almost an afterthought. Servers drop plates as they come up in the window. Rounds of drinks chase rounds of drinks. It’s just … easy.

All of it is, really. Which, maybe, is Good Luck’s most notable charm. There’s nothing complicated about it, no ego or aggressive cheffy-ness. It isn’t shouting about anything. Just drop by, it says. Hang out. Eat if you’re hungry. Don’t worry about what to order. Maybe just a couple meatballs and a glass of something bubbly. Whatever works for you.

When I look up from the table, I can see that the dining room has been filling up around me. The crowds came late. On the barest edge of spring, the whole city feels like it’s coming alive again. Remembering how to have a good time. My friends and I order another round of beers, pick at the leftovers, and stay until the staff starts stacking the chairs.

Published as “Getting Lucky” in the May 2022 issue of Philadelphia magazine.