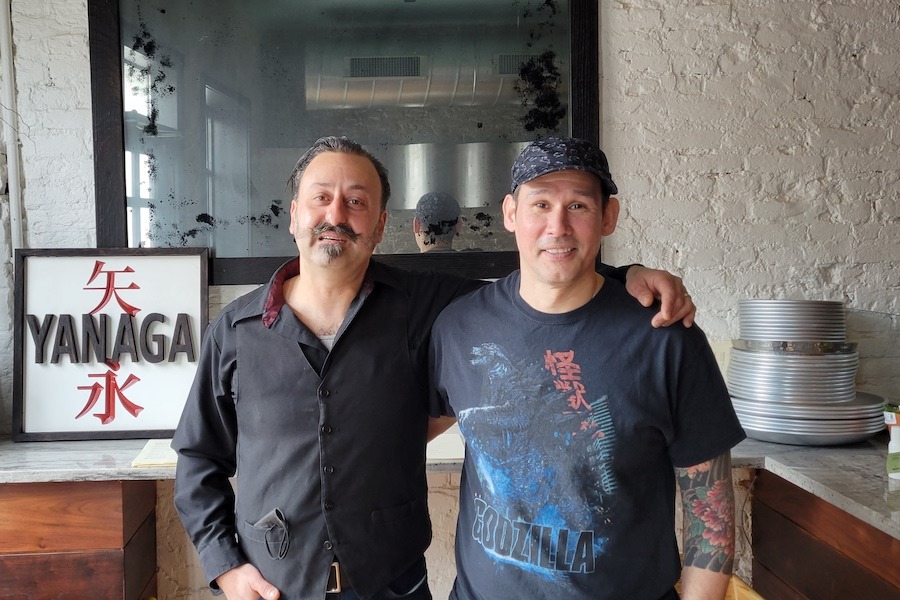 Howdy, Buckaroos! Welcome to the Foobooz Monday news round-up. The sun is shining, the snow is melting, and I’ve just got a few quick things for you this week to get you completely up-to-date on all the Philly food news that matters.

This week seems to be all about collaborations and benefits, so let’s kick things off this week with news from two of the most popular restaurants in town inviting some of the biggest chefs in Philly into their kitchens.

A Double-Shot of Collaboration Dinners

Know what’s better than an ongoing collaboration project between some of the city’s best chefs?

TWO ongoing collaboration projects. Which is exactly what we have to announce this week.

First, there’s this one: a.kitchen in Rittenhouse has announced a whole new series of burger nights with curated snacks, small plates, wine pairings and, of course, special burgers from some of the biggest names in town.

They’re kicking things off with Joe Beddia on Tuesday, March 22nd. He’ll be cooking alongside a.kitchen chef Eli Collins, offering “a handful of Pizzeria Beddia-inspired small plates, a bespoke Beddia Burger created exclusively for this event, and a Beddia-curated selection of wines by the glass.” Joe will also be acting as guest sommelier for the night, and his burger will be on the board alongside Eli’s already excellent burger. Here’s what the menu looks like right now:

And that’s not all. The whole Burger Night series will be continuing. A.kitchen welcomes Melissa McGrath from Sweet Amalia Oysters on April 19th, Amanda Shulman from Her Place Supper Club on May 3rd, Jon Adams from Rival Bros. on May 17th and Yehuda Sichel from Huda on June 7th. So, you know, mark your calendars or whatever.

Isn’t it nice to be making plans again?

Next up, we have another collaboration project—this one a returning series that we’ve talked about before.

Over at Stina, chef Bobby Saritsoglou is bringing back his charity dinner series that I told y’all about back in September of last year. And this time around, he’s kicking things off with a multi-course prix fixe benefit dinner cooked in collaboration with one of the biggest names in Philly right now, Kevin Yanaga.

Yanaga already has Izakaya by Yanaga in Fishtown. He’s getting ready to open its sister restaurant, Omakase by Yanaga, right next door. And he’s going to be hitting the kitchen at Stina on Tuesday, March 22nd (yeah, same day as the Beddia burger collab) for an $85 prix fixe to benefit the Asian Arts Initiative. Again, the menu looks pretty fantastic. Dig it:

You can also tack on a $15 sake flight from Sango Kura, the only sake brewery in Pennsylvania. Which is pretty cool, considering I didn’t even know this state had ANY sake breweries.

Anyway, you can make reservations for the Kevin Yanaga/Asian Arts charity dinner at Stina right here. Stina did three of these collaboration benefit dinners last fall, and now they’re ramping back up again with a whole new series. Yanaga is just the first. I’ll keep you updated as more information comes in.

Oh, and that reminds me. Speaking of burger news… 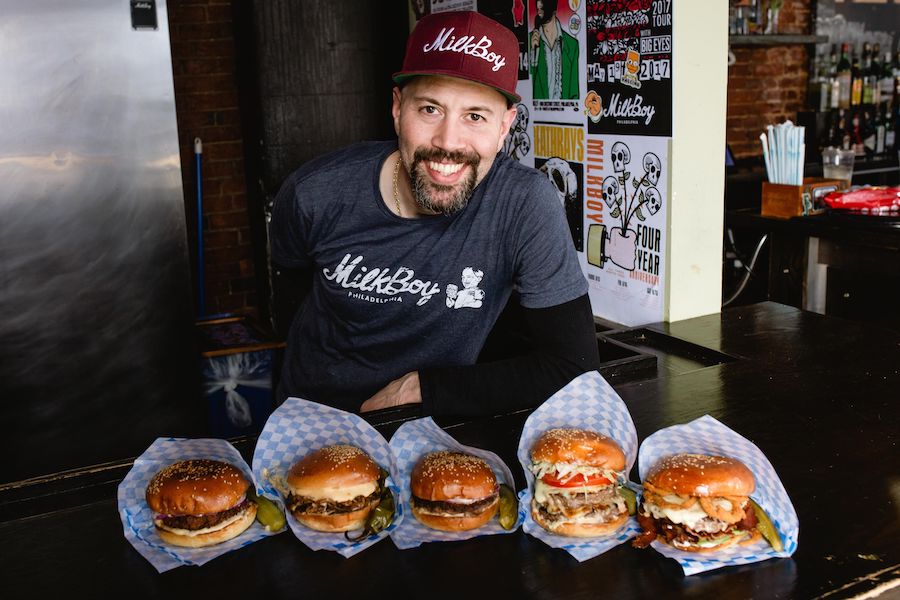 You know ’em for their booze, snacks, live music and breakfast sandwiches, but MilkBoy is getting into the takeout game with a new expansion at the South Street location.

MilkBoy TakeOut is a new “takeaway-only module” with a create-your-own-burger menu designed by culinary director Yun Fuentes. I literally imagine this as a tiny box outside of MilkBoy that Yun lives in, granting burger-shaped wishes to anyone who whispers them into the box.

According to MilkBoy’s marketing staff, this is NOT how it works. But maybe they just don’t believe in magic like I do. Maybe they don’t want their Mondays filled with whimsy and joy. I don’t know. But according to them, it’s basically an addition to the existing MilkBoy South Street location, featuring burgers, waffle fries and a long list of customization options that will allow people to create the burger of their dreams.

Speaking of which, they’re also launching a “Burger of the Month Burger” (the BOMB) where burger enthusiasts are encouraged to use the various topping options to create (and name) a truly killer sandwich, then snap a picture and tag @milkboysouthstreet on Instagram. Best one gets a $25 gift certificate and the honor of being the BOMB of the month.

MilkBoy is celebrating the launch of MilkBoy TakeOut on Sunday, March 20th, by giving away 100 free samples of their “Hit Single”—the signature MilkBoy burger with a single beef patty, Tommy Sauce (their signature sauce named after co-founder and musician Tommy Joyner), red onion, MilkBun, and a sidekick pickle. The giveaway starts at 11 a.m., but I’d think about lining up early if you’re interested

Night Kitchen Bakery is stepping up this month with “Hamantaschen for Humanity”—a fundraiser for Polish Humanitarian Action to help out those who are giving comfort to the refugees fleeing the war in Ukraine.

All month long, Night Kitchen will be selling hamantaschen and special Flower Power cupcakes, with 20% of sales going to PHA to help those at the border. It’s a little bit of “bakery solidarity,” from one of the city’s most well-known bakeries and cafes, and a concrete thing you can do to help the refugees. And also, you get cupcakes. So it’s win-win. 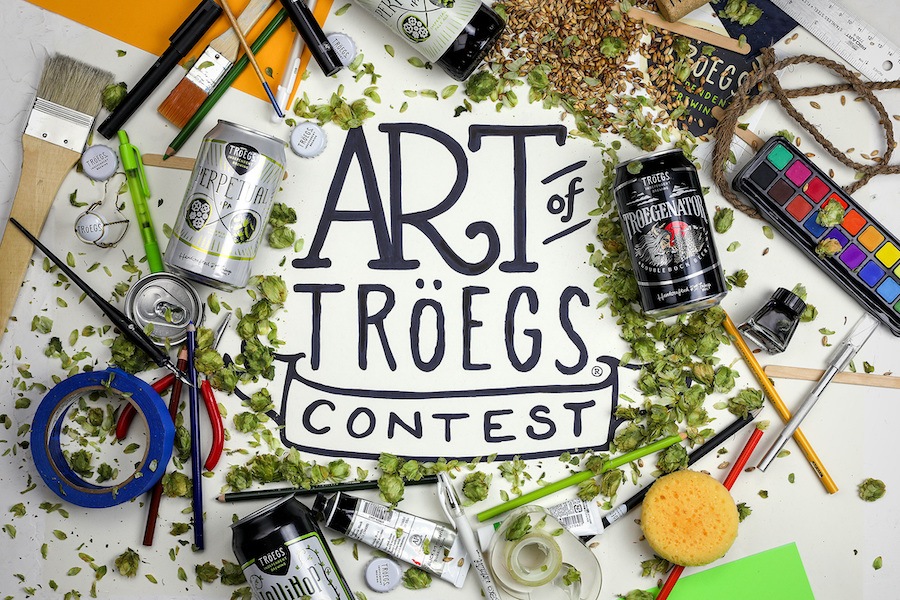 The Wayward — the restaurant in the Canopy by Hilton hotel in Midtown Village — has a new team in the kitchen and a new menu ready to go.

Exec chef Carlos Cartagena comes to Philly by way of NYC and the kitchens of Jean-Georges Vongerichten and Richard Sandoval. Sous chef Barbara Voltaire (also from New York, and Haiti before that) is backing him up. And together, they’re doing a whole farm-to-table French menu, including a re-launched breakfast, brunch and happy hour. They’ve got croque madames and Kismet bagels at breakfast, duck confit and butcher-cut steaks with mushroom duxelle at dinner, and petit brioche sandwiches for happy hour — including a short rib with horseradish aioli and fried shallots that looks particularly nice.

So, you know, if you’re in the neighborhood and looking for a bite, now you’ve got another option.

If you’re an artist and a fan of Troegs Brewing, I’ve got some news for you. ’Tis the season once again for the annual “Art of Troegs” contest where the brewery asks all the creative (and drinky) people out there to submit works of art (in pretty much any medium) inspired by their beers, their employees, their labels … whatever moves you.

In years past, Troegs has used these submissions as beer labels, to design signs for the brewery, even to re-imagine the iconic Nugget Nectar artwork. So yeah, they’re serious about this. Because they traditionally get so many entries, they throw a whole-ass gallery show. And because it’s a contest, the winner will get $500.

You can check out all the details here, but keep in mind that all entries must be received by May 1st. So put those Crayolas to work, cats and kittens. And who knows? You could end up beer-famous.

First, I’ve been hearing rumors about a big opening coming very soon — one that we’ve been waiting on for months now and didn’t expect to be happening quite so soon. I’m looking into it as we speak, and hope to have some big news for you in next week’s column. So stay tuned for that.

And speaking of big news, what with spring on the horizon and things looking a little rosier for the industry after a couple long, hard years, we here at Philly Mag and Foobooz World HQ have decided that it’s time to throw a party. A BIG party. A party full of food and booze and twinkle lights and 500 or so of our closest friends.

So keep your peepers on this site over the next couple days for the details, okay? It’s gonna be something special, and I wanted you regular readers to be the first to know about it.

That’s all till next week, folks. See ya when I see ya.