Halfway Between Philadelphia and the Shore, an Oyster Destination

Growing some of the best-tasting oysters in the country is no easy feat. Neither is turning the Middle of Nowhere, New Jersey, into a foodie destination. Sweet Amalia Oyster Farm’s Lisa Calvo is determined to do both.
By Alex Tewfik· 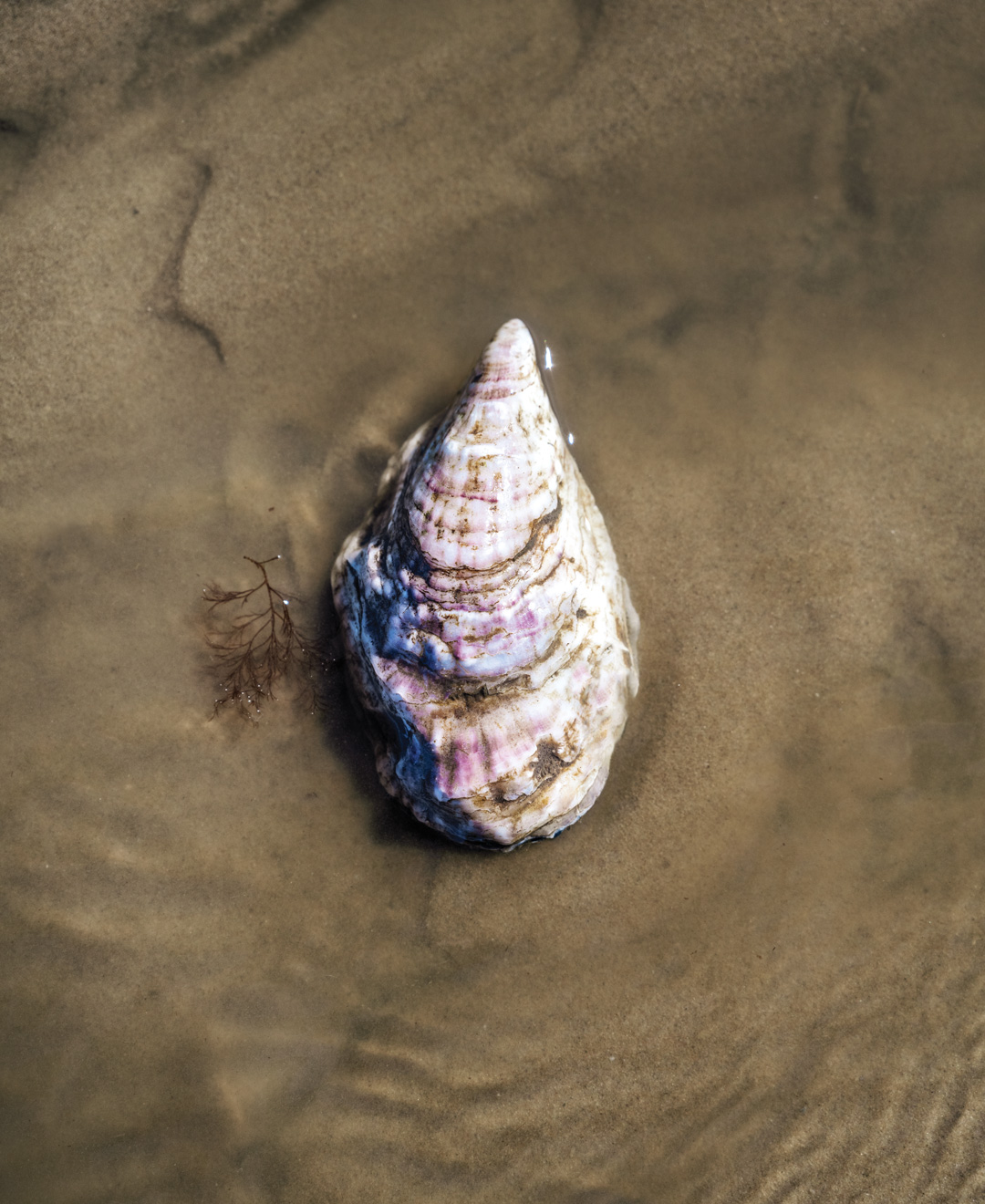 The Sweet Amalia oyster farm has no address, really. You either know how to get there or you don’t — and even when you do, it’s still a guessing game. It’s somewhere off Route 47. A mile marker supposedly tells you when to turn onto an access road, but that mile marker is covered in shrubbery.

When you find the road, you follow it, all crushed shells and dirt, down to the bay. And as you do, you’ll notice that the trees around you have started to die — or are already dead. It’s pretty, though, in that even nature in decay can be beautiful. Keep following that road down to a tiny lot overlooking the Delaware Bay, property that the state of New Jersey splits with Rutgers University’s Haskin Shellfish Research Laboratory. That’s where I meet Lisa Calvo, the owner of the farm, and chef Melissa McGrath, both already in their waders. McGrath is tucking a shucking knife into her front pocket, and Ed Pappas, Sweet Amalia’s investor and business guru, is in the trunk of his Tesla, pulling waders over his jeans. It’s 38 degrees out, and we’re about to walk into the ocean. 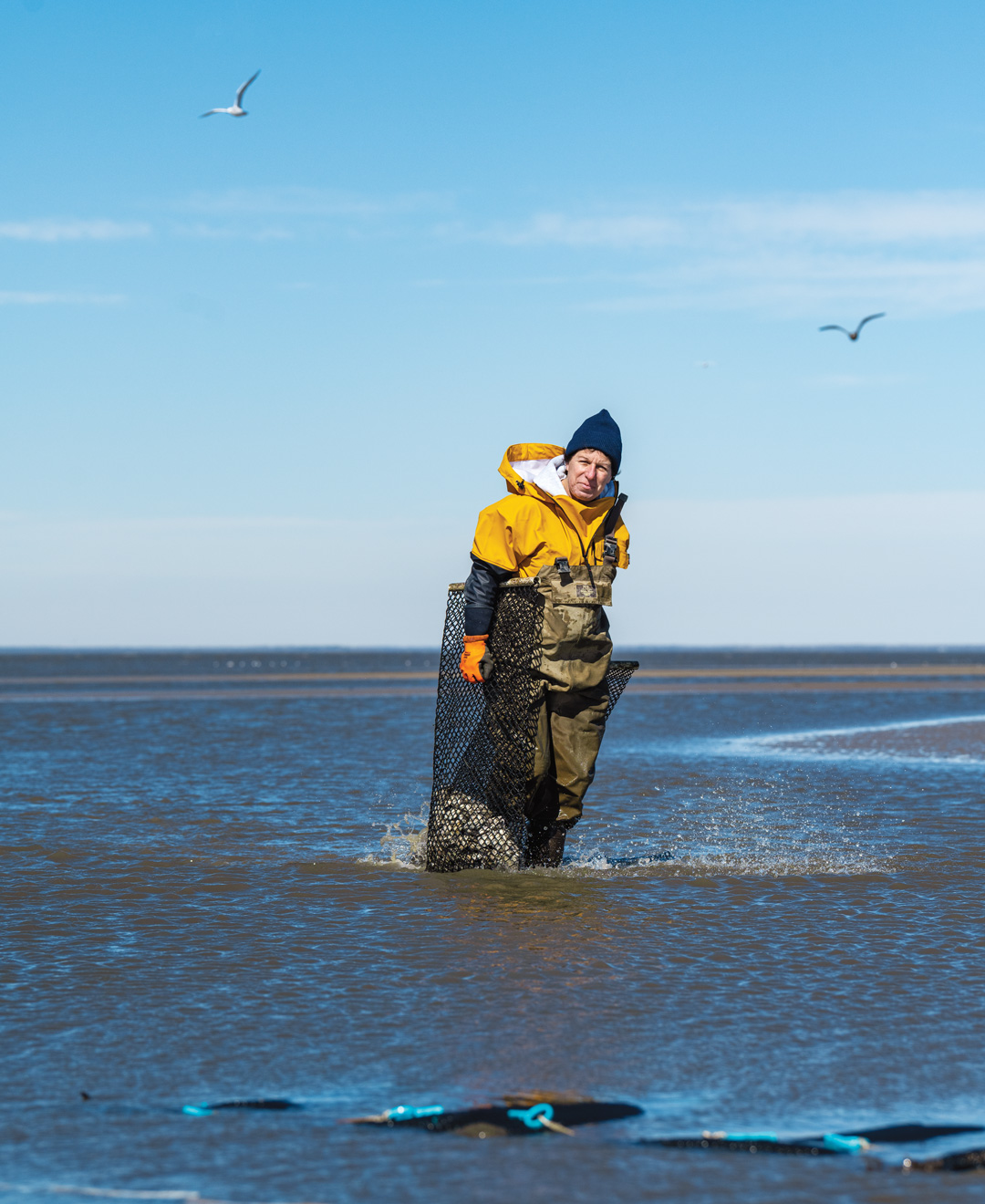 “All those dead trees you saw?” Calvo says. “That’s all climate change.”

She says it almost defensively, as if I’m judging her home. She tells me they call it a ghost forest: “The sea-level rise caused saltwater intrusion into the forested area adjacent to the marsh. Trees couldn’t tolerate the salt.”

This land and these waters have been a home to her — a place where she and a merry band of marine scientists and researchers spent years and years knee-deep in the Dela­ware Bay, studying diseases that have ravaged the wild oyster population. She’s a full-time scientist with Rutgers University and a part-time oyster farmer and acts, officially, as a liaison between the science and farming communities. She named her oysters after her daughter, Amalia, and it’s in these very waters that the farm was started. 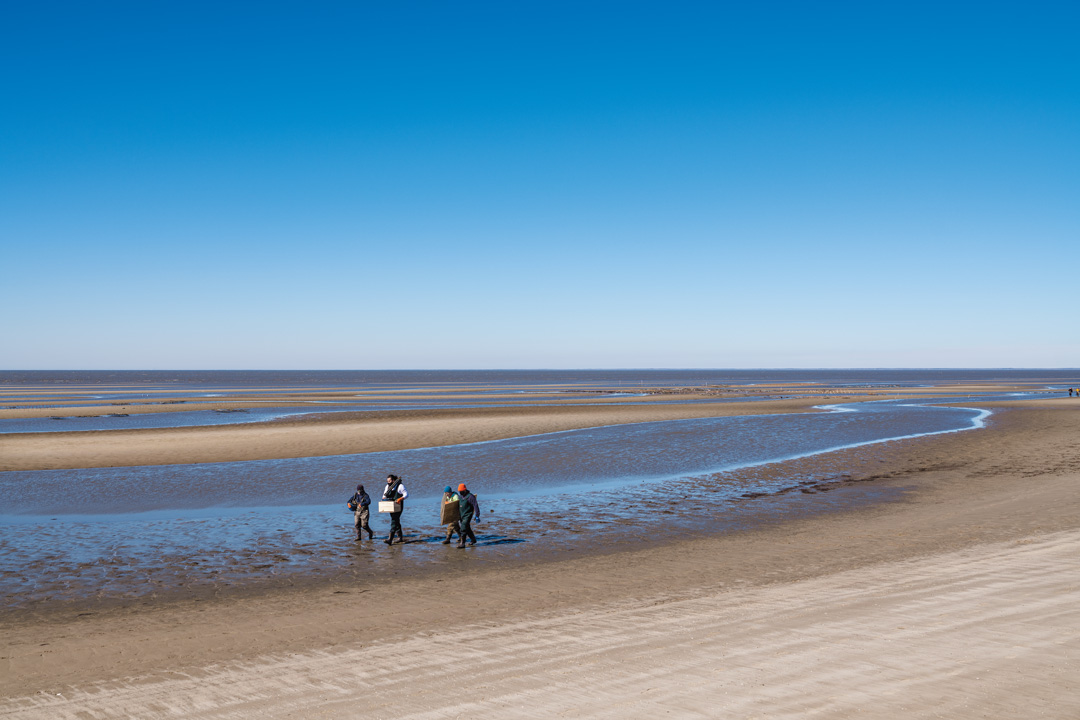 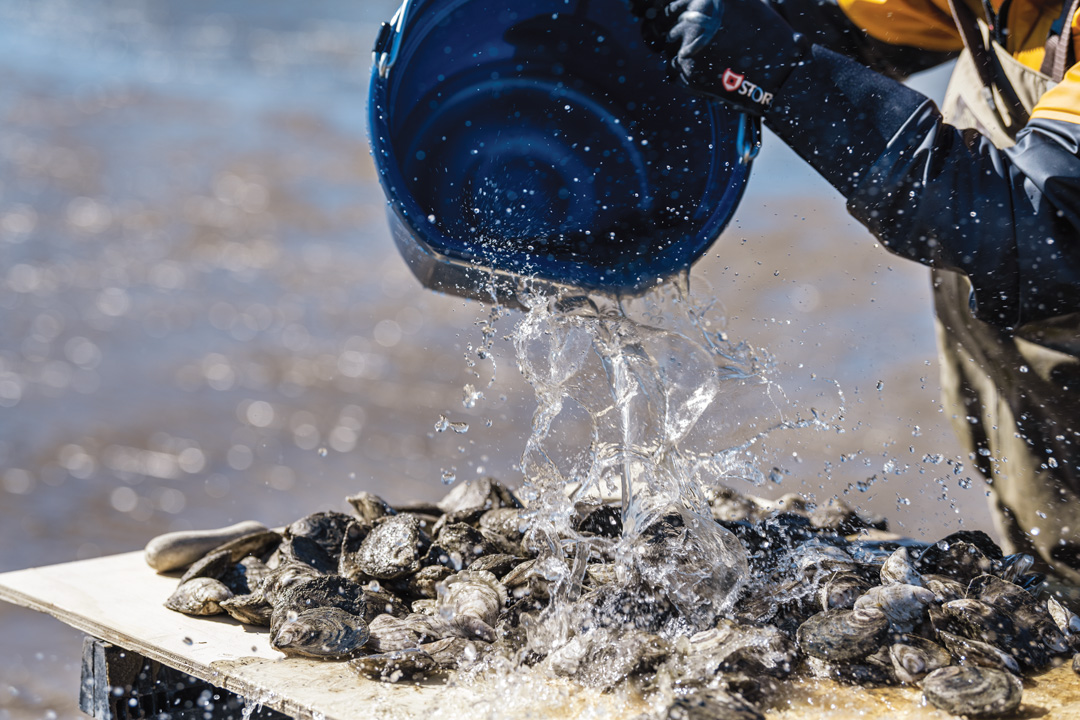 Sweet Amalias getting a wash. Photograph by Linette & Kyle Kielinski 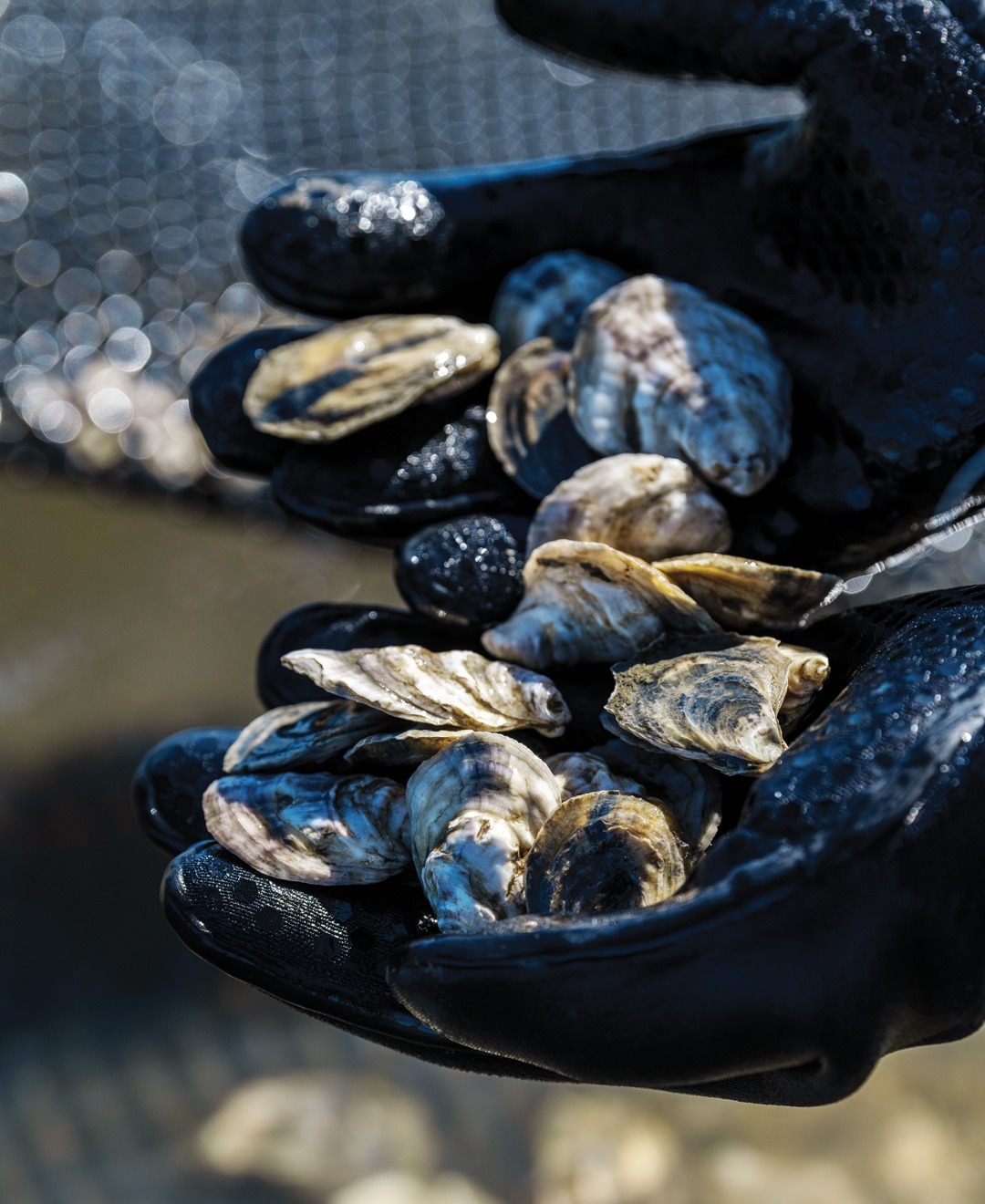 She walks us onto the beach, giving me the lay of the land, telling me the history of this part of the world — how there are fisheries up and down the coast, how oyster farming has always been a big part of the fishing industry. How that industry, of course, has long been an economic driving force on the southernmost tip of New Jersey.

As we walk toward the water, it starts to feel like we’re at the end of the world — the edge of it, at least. As if here in South Jersey, Earth ceases to be round. This time of day, the water never goes above your beltline. You could walk for miles and you still wouldn’t be swimming. There are little rods sticking out of the water that mark where the Sweet Amalias are growing. We slog toward one. Calvo plunges her hands in the water and yanks out a full plastic-mesh bag. She raised these oysters from the time they were just babies, seeds, each one the size of a grain of sand. As they grew, she and her team sorted them into different mesh bags, the fast growers graduating quickly from small mesh to bigger mesh for at least 15 months until this moment, when they’re about three inches long and ready to eat.

She raised these oysters from the time they were just babies, seeds, each one the size of a grain of sand.

Which we do, with our feet still in the water. Pappas proudly pulls an oyster out of the mesh, pops the speckled white top up from its hinge, knifes through the connective muscle, and flips it over in its shell. (This motion is called the “Philly flip,” by the way — a tribute to the 300-some oyster houses Philly had in the late 19th century.)

A Quebecois restaurateur named David McMillan once griped to Anthony Bourdain: “When you have oysters, don’t put stuff on them. Where oysters are from, there ain’t no fucking lemon trees. … A lemon tree hasn’t ever seen an oyster.” I remember that quote when Pappas hands me my first Sweet Amalia of the day.

“For you,” he says. I cock my head back and let the flesh and holy water slide down my throat, trailing tiny bits of the soft sand on which we stand. It’s ice-cold and perfect. It needs nothing, certainly not any lemon.

Calvo slurps hers and smiles. “Oh, yeah. That’s how we like ’em.”

Sweet Amalias have earned a lot of praise over the years, with renowned food writers like Ruth Reichl and Pete Wells sealing their approval. Having them on your restaurant’s menu has become something of a badge of honor in Philly as the farm-to-table movement went from a novelty in the ’90s to the standard way of doing things if you want your restaurant taken seriously. The Sweet Amalia Oyster Farm is a farm for chefs in the same way Elizabeth Farm in Lititz, Pennsylvania, which raises rare Mangalitsa pigs, is a farm for chefs, or Ian Brendle’s Green Meadow Farm (which grows, sometimes, specific varieties of produce to custom-fit specific menus) is a farm for chefs — the only difference being that Calvo’s farm is submerged in water. But it takes the same dedication to sustainability, the same minimal-intervention let-Mother-Nature-do-her-thing commitment from its farmhands. Calvo has every chef she sells to in her phone contacts, and the only way to purchase from her is to reach her directly. She prefers that you come by the farm and see the setup in person. More importantly, outside of some limited retail sales, she only sells to chefs. Ones she trusts with her oysters. 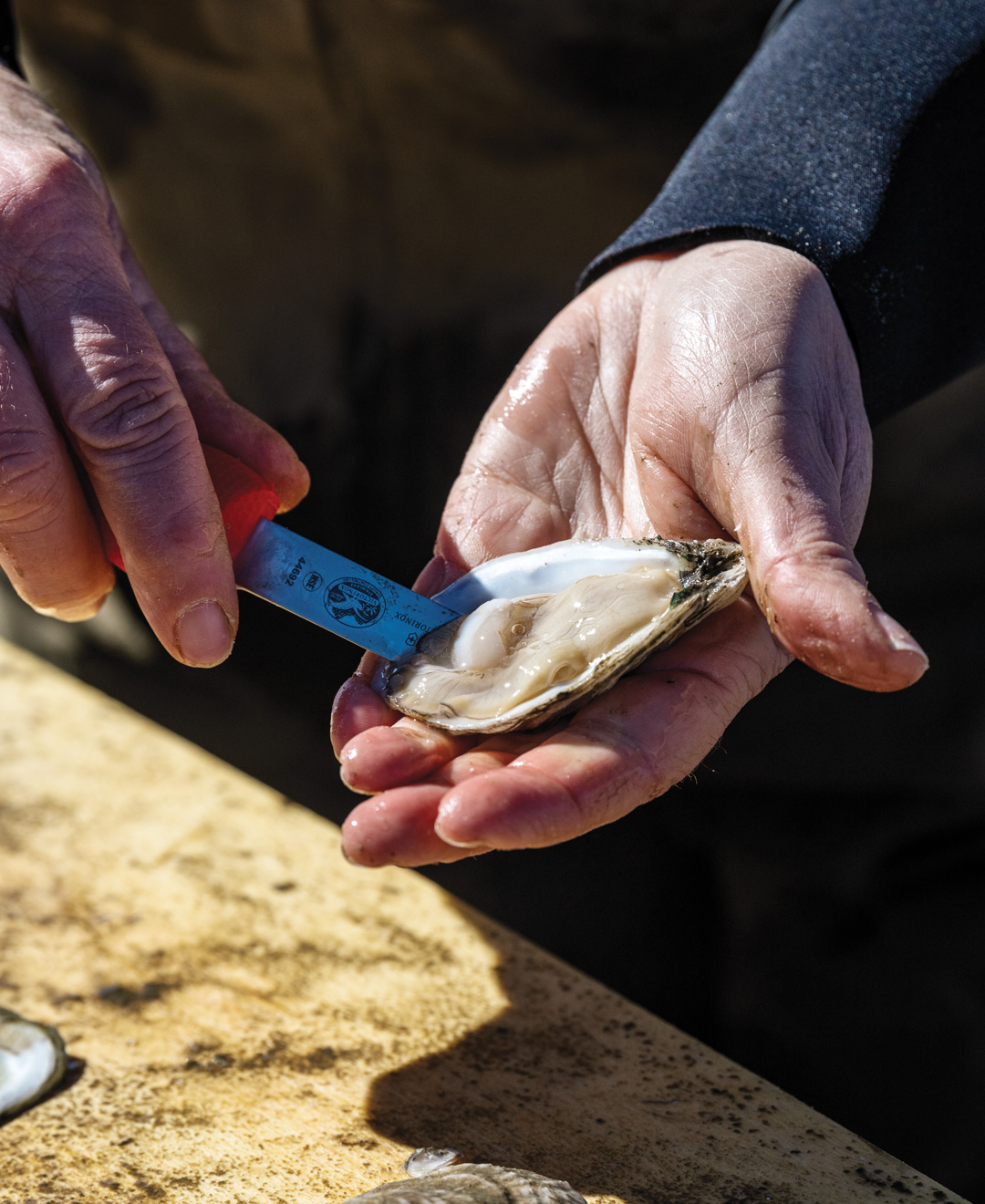 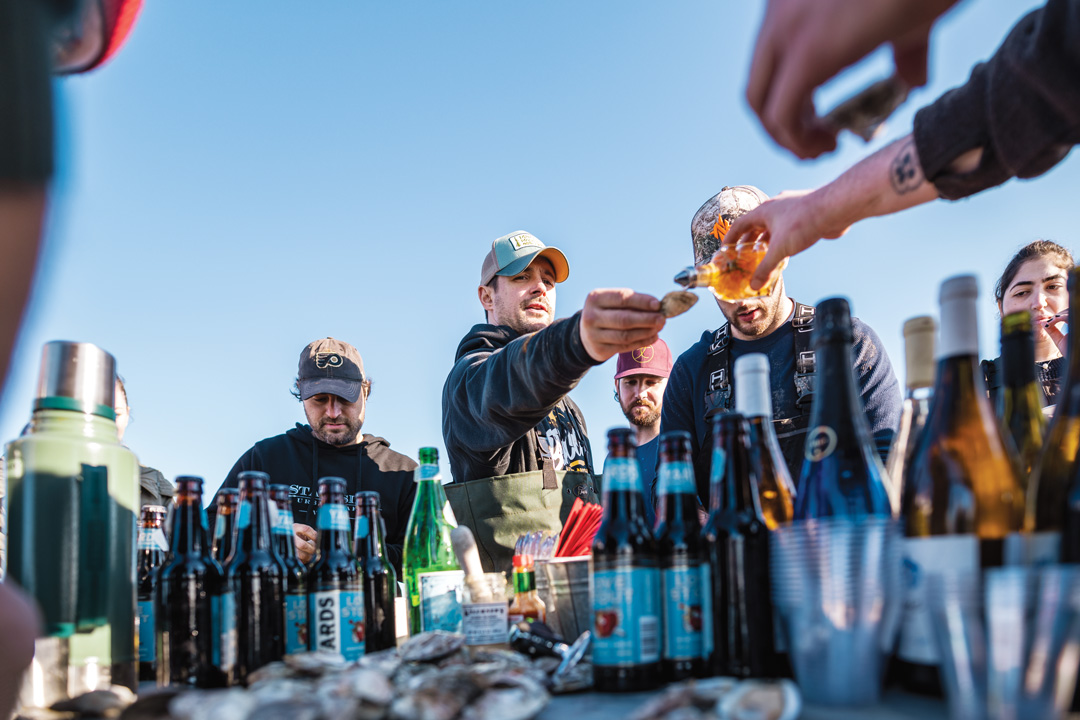 Chef Nick Elmi and his kitchen crew on a pre-pandemic field trip to the farm. Photograph by Linette & Kyle Kielinski

She’s spent a lot of time exploring ways to make this little farming gig a full-time job, but it’s hard. Especially these days.

There’s dealing with nature: In 2016, Calvo was forced to relocate her original farm when a threatened migratory bird species decided to visit on its way to the Canadian Arctic. In its conservation plan, the New Jersey Department of Environmental Protection redesignated where farmers were and weren’t allowed — and her farm had to go. She partnered with Pappas (a family friend who, after the sale of his family’s juice-bottling business, was exploring new investment opportunities), and in an effort to grow the business and maintain consistency, they tried to buy a property that actually owned riparian rights to the water. But the sale fell through, so she moved her farm a half mile south.

And then there’s dealing with the pandemic: When COVID came last spring, the tide-to-table business model she’d cultivated all these years — like so many small farms across the nation — was shot. Pappas’s earlier investment, she says, helps keep them afloat as they wait out the coronavirus’s attack on restaurants. They doubled down on the operation when they bought the former Petrini’s Market near her home in Newfield. Calvo had been renting it as a pit stop — a place to store and refrigerate her oysters overnight between trips from Cape May to Philly. 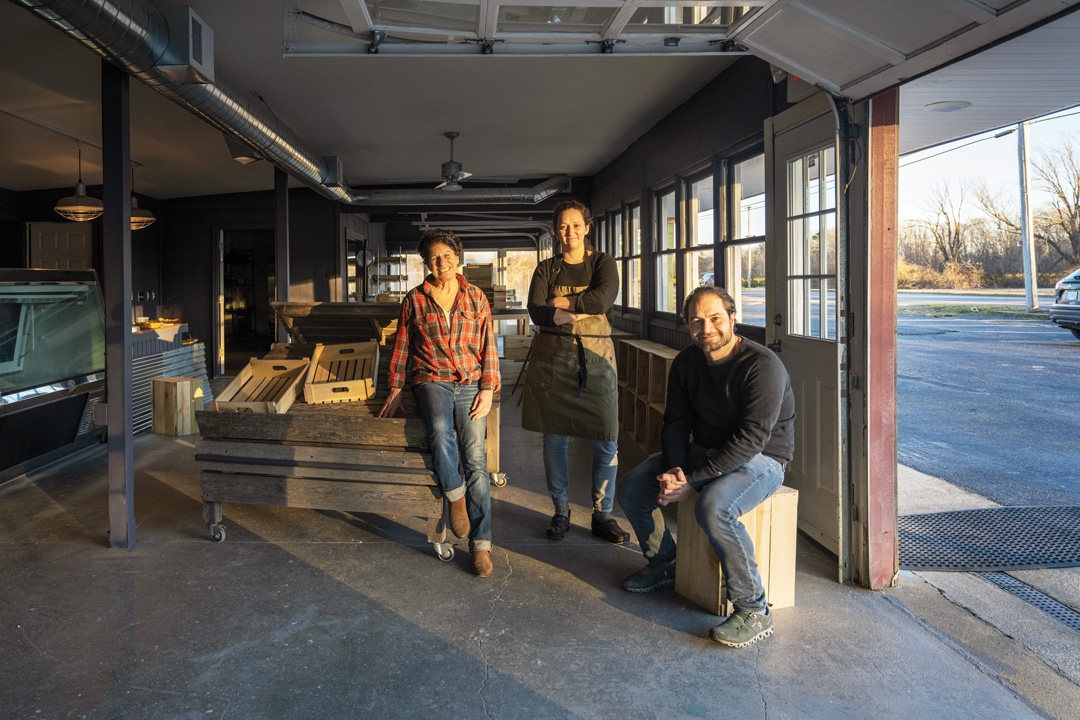 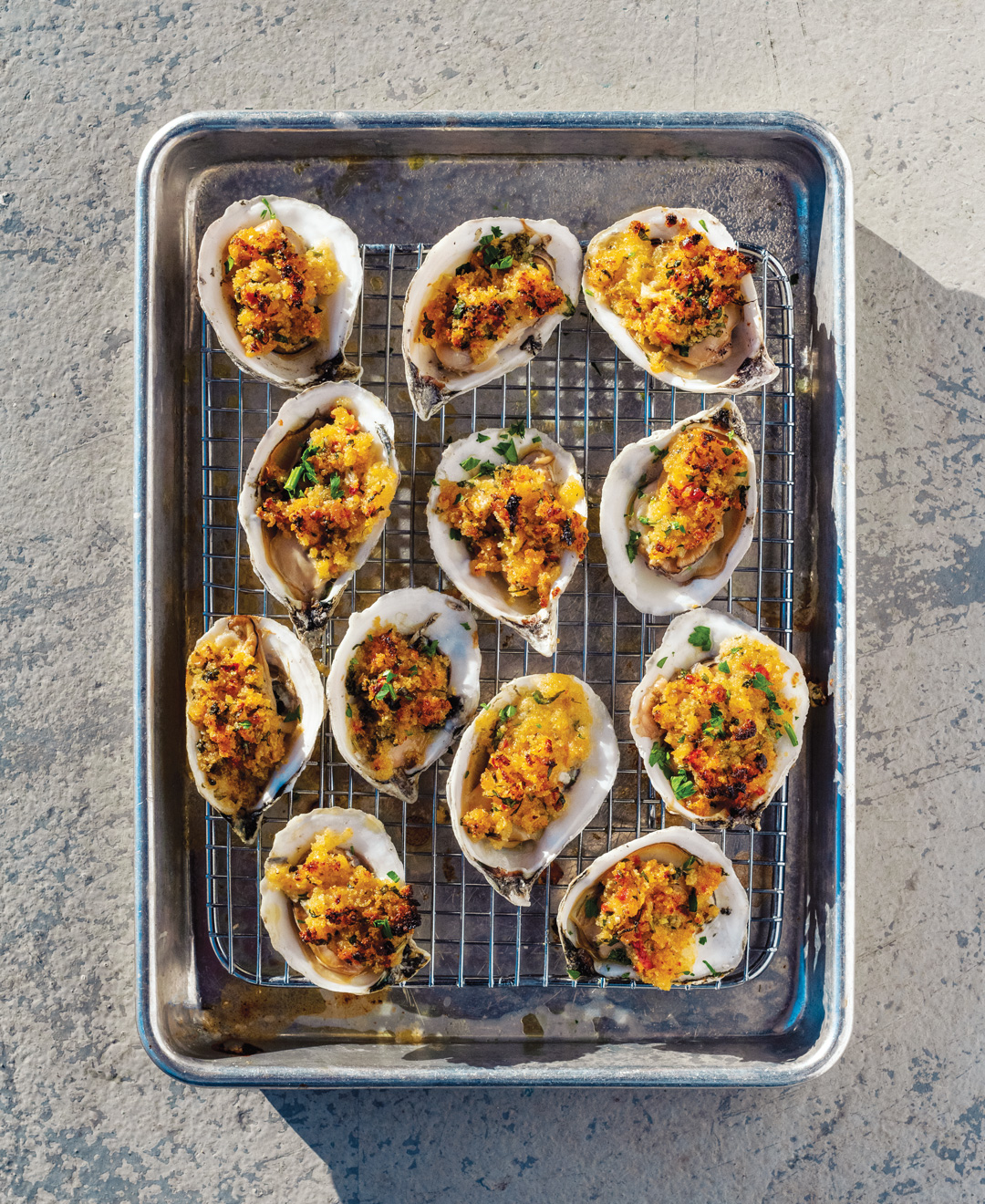 Petrini’s was once a little farm stand next to an ice-cream shop called Purple Penguin and was, at some point, famous among locals for its pies. Now, it’s where they’ll build out Sweet Amalia Oyster Farm Market & Kitchen. It’ll be a distribution hub, sure, but it’ll be a market, too, selling local cheeses and organic produce and South Jersey wine. They’ve hired Melissa McGrath, who spent many summers running the show at the Diving Horse in Avalon (where she first met Calvo), to launch a catering and takeout operation. The plan is elevated regional classics: hoagies, salads, an array of prepared foods, a cheffy deli counter. McGrath will get to show off her cooking chops with communal farm dinners, once that’s a thing again. Pappas says he’s toying with the idea of devising a scenic Sweet Amalia Shore route just for us Philadelphians. It’ll be a food destination, without a doubt.

But for Newfield — a small town that doesn’t often see much change, “a place where everyone knows everyone,” according to Calvo — it will be something new entirely. 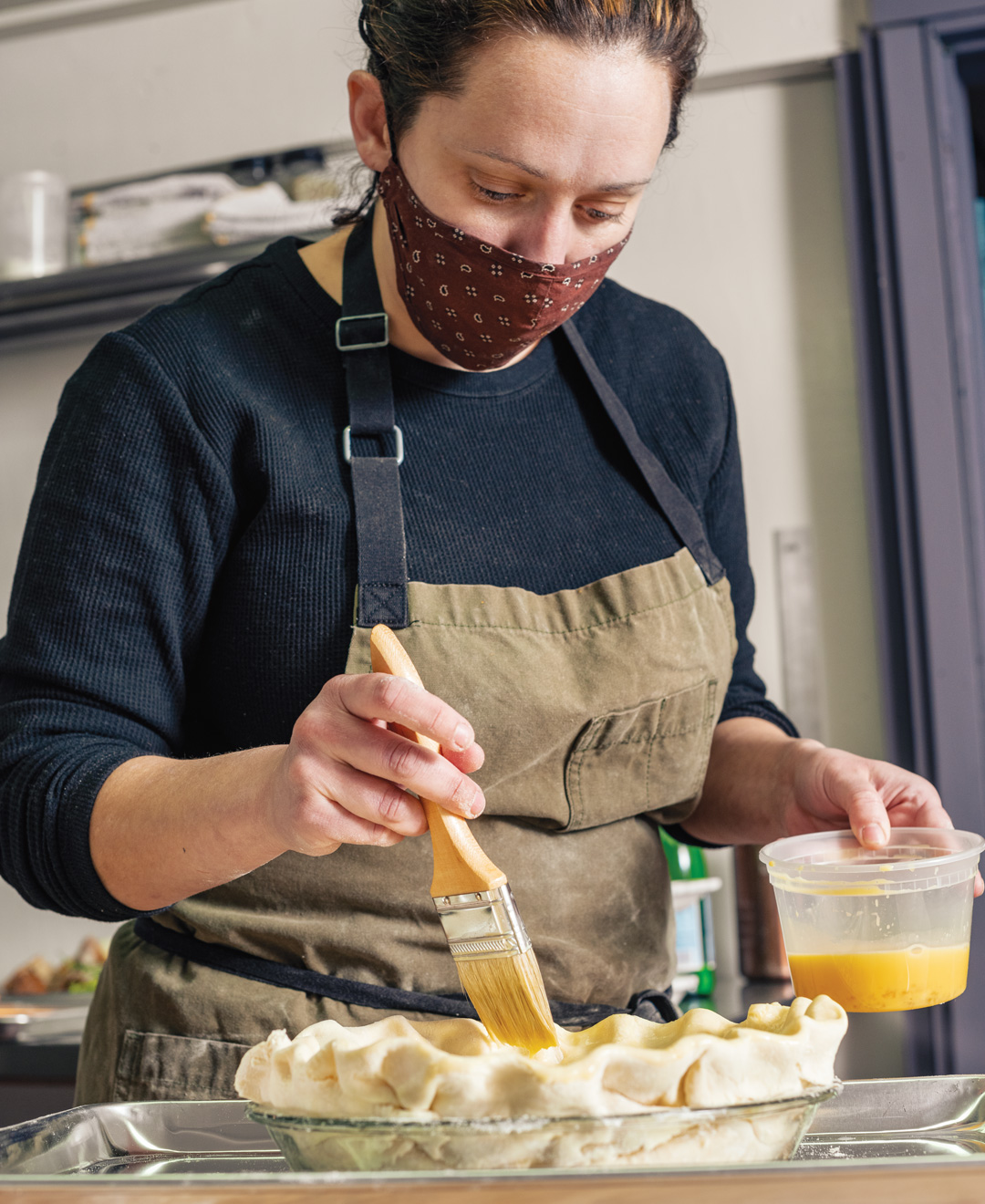 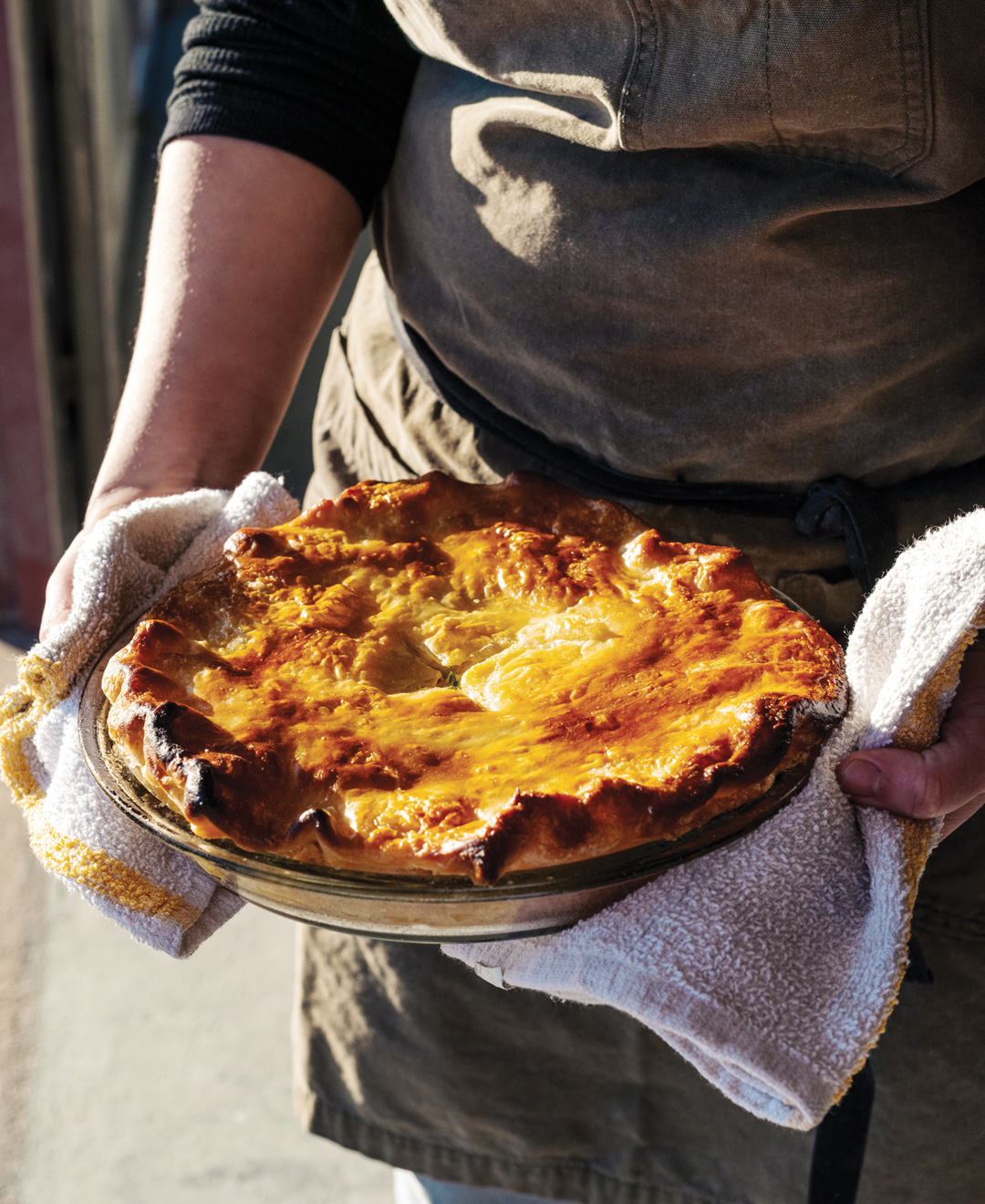 Back at the market, she seems nervous as we discuss their plans. “Everyone here goes to Wawa for their hoagies,” says Pappas. “Even if we get a fraction of those customers, we’ll be okay.”

Calvo is looking around the empty space and out the window toward a truck repair shop across the street. “I want it to be good, but I want it to be accessible, too,” she says, not saying the thing we’re all thinking: that Newfield — where she grew up, where she lives now — might not be ready, or even want something like this. She says, “We’ll still sell pies, I guess.”

McGrath chimes in: “I’ve even got an oyster pie in the works.”

Published as “No Grit, No Pearl” in the April 2021 issue of Philadelphia magazine.