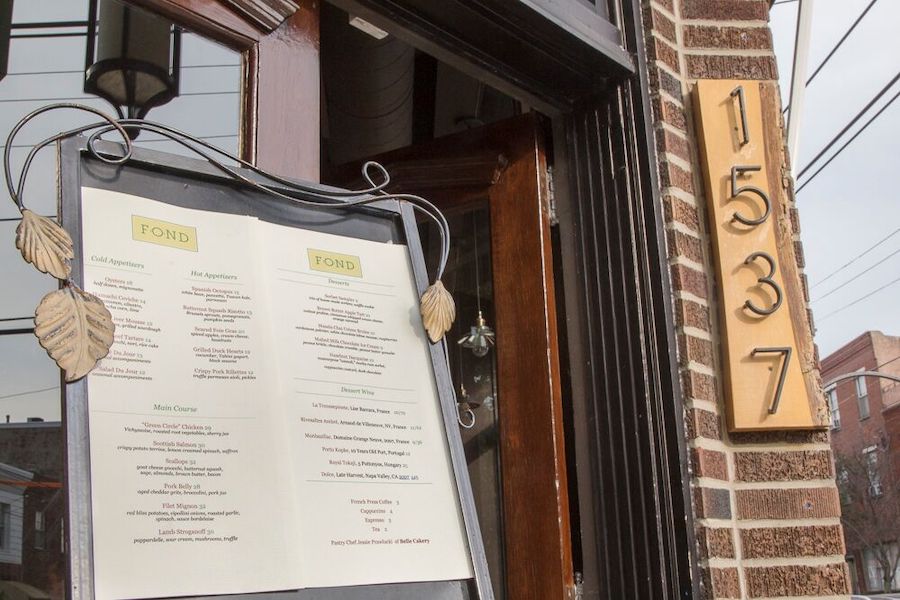 Things are quiet in Restaurant World this week. It’s almost Christmas — another weird one, to be sure — and most folks are just looking at getting through the final sprint before the end of the year, New Year’s Eve and a fresh start on the other side.

Still, there are a few things happening around town that I think y’all should know about. A new chef here, a big closure over there, a drag show, some doughnuts, and a change in the way restaurants — ALL restaurants — will be working come 2022. So let’s just sit back, have a quick chat, and then we can all go on about our business, okay?

Welcome to this week’s Monday round-up: Almost-the-Holidays Edition. Let’s kick things off with …

Looks like Fond didn’t quite make it to the end of the year. Over the weekend, Lee Styer and Jesse Prawlucki made the decision to close their beloved French-y New American restaurant on East Passyunk and (eventually) make it the new home of Styer’s brunch spot, the Dutch.
And look, it’s not surprising, is it? Fond suffered during the pandemic, same as every other restaurant. Styer and Prawlucki did everything they could — serving outdoors, selling household supplies and hand sanitizer — but no amount of scrounging was ever going to make up for those empty nights in the dining room. And now, going into another uncertain winter, they just decided they’d had enough. The Dutch is an easier beast to run. It’s more approachable. Everyone loves brunch.
There’s lots of details on this sad news over at the Inquirer if you’re interested. But suffice it to say, Philly’s restaurant scene just got a little bit quieter with this closure. And Fond will absolutely be missed.
Moving on …

Starting January 3rd, 2022, if you want to eat inside any restaurant in Philly, you’re going to have to show proof of vaccination. All of them. No exceptions.

Ditto movie theaters. You wanna check out a show at the Wells Fargo Center? Better have that card. And the same rule applies to all employees. It’s a mandate. And speaking as someone who has to go to restaurants to make a living, it’s about goddamn time.

The new rule goes into effect on the first Monday of the year. For the first two weeks, you’ll be able to present proof of a negative COVID test (taken within the last 24 hours) to get through the door, but after that? It’s vaxxed or eat outside. In the snow. In January.

I don’t know how long this new rule is going to last. With the way things are going with Omicron and the climbing rates of infection, I don’t know what’s going to happen to restaurants in general. If our last pandemic winter taught me anything, it was not to try to look too far into the future. But no matter how things shake out, I’ll be there to keep an eye on things and let you know what’s what.

And tell you where to find some pretty delicious tacos while the world falls apart.

Drag for a Good Cause

Over at Franky Bradley’s, they’re throwing a charity shindig this week to liven things up.

On Thursday, December 23rd, they’re bringing in a whole crowd of Philly’s best drag and burlesque performers for a holiday cabaret fundraiser they’re calling “Naughty or Nice.” The details:

“Hosted by Maria Topcatt and Flirt Vonnegut, Naughty or Nice is an extravagant, holiday-themed cabaret show fit with an ensemble of beloved local performers including Eric Jaffe, Icon Ebony Fierce, Miss V, Sapphira Cristal, HoneyTree EvilEye, Vera Valentinaa, and more. In addition to one fabulously fierce evening of elaborate song and dance, a raffle will be held with festive prizes under Franky Bradley’s Christmas tree.”

In the spirit of the holiday season, all proceeds from the event will be donated to the Attic Youth Center, supporting Philly’s LGBTQ youth. The show starts at 9 p.m. Tickets are $15. And if this all sounds like a fine way to celebrate Christmas Eve-Eve, then you can get your tickets right here.

Last month, I told you all about a series of collaboration events between River Twice’s chef Randy Rucker and a whole bunch of his big-name pals running straight into the new year.

Well, I’ve got a small update for those of you who might find yourself wandering the streets of South Philly on December 22nd. Alex Talbot of Ideas in Food and Curiosity Doughnuts is scheduled to do a dinner with Rucker at River Twice that night, but now he’ll also be setting up shop on the sidewalk outside 1601 East Passyunk starting at 10 a.m. to sling some doughnuts.

Cash-only, first-come, first-served, and they’ll be selling until the doughnuts are gone. But two things to keep in mind here:

First, Talbot does some VERY cool things at Curiosity. Seriously, if you have any interest at all in the doughnut-making arts, you have to check out this list of what they do at Curiosity and the various doughnut varietals found in the wild.

Second, the last time he did one of these things in the neighborhood (outside ITV), the lines went around the block. So show up early if you’ve got a hankering, that’s all I’m saying. And dress warm, because it’s gonna be cold out there.

Looks like the Grand Lux Café at King of Prussia Mall won’t be around much longer. The place was basically a Cheesecake Factory for people who think they’re too bougie to eat at the Cheesecake Factory — a massive, weird, occasionally hellish conglomeration of Continental cuisines with a full bar and a ridiculous variety of desserts. Back when I was a younger, meaner critic, I wrote about the Grand Lux experience in Denver, and it was a long, Dante’s Inferno-style descent into madness, booze, double-stuffed potato spring rolls and Kobe beef hot dogs. “This is where food comes to die” was one of the nicer things I had to say. After that, I never had any urge to check out the version planted here at the KOP mall.

Anyway, they’re shutting down the huge space (250-plus seats) on January 31st. No word yet whether there’s a new tenant coming in.

And finally this week, if you’re looking for somewhere to stay warm instead of standing around on the Avenue waiting for a sack of brioche doughnuts and some churros, check out this list of the 34 coziest bars and restaurants in Philly right now. Prefer to warm up from the inside-out? Then how ’bout a list of places serving hot cocktails around town?

If you’re interested in checking out Christmas Village in the week before Christmas, there’s this guide. And if you’re looking for the best Christmas cookies in town (because NO ONE wants to be stuck eating Aunt Mary’s pecan sandies again this year, not after what happened to cousin Stu …), then check out this list.

I’m just saying, whatever it is you need this week? We’ve got you covered here at Foobooz HQ. We’ve got your back.

See y’all on the other side.