Plus, Stratus Lounge reopens, a food truck festival comes to Fishtown, and as always, lots of Italian food news. 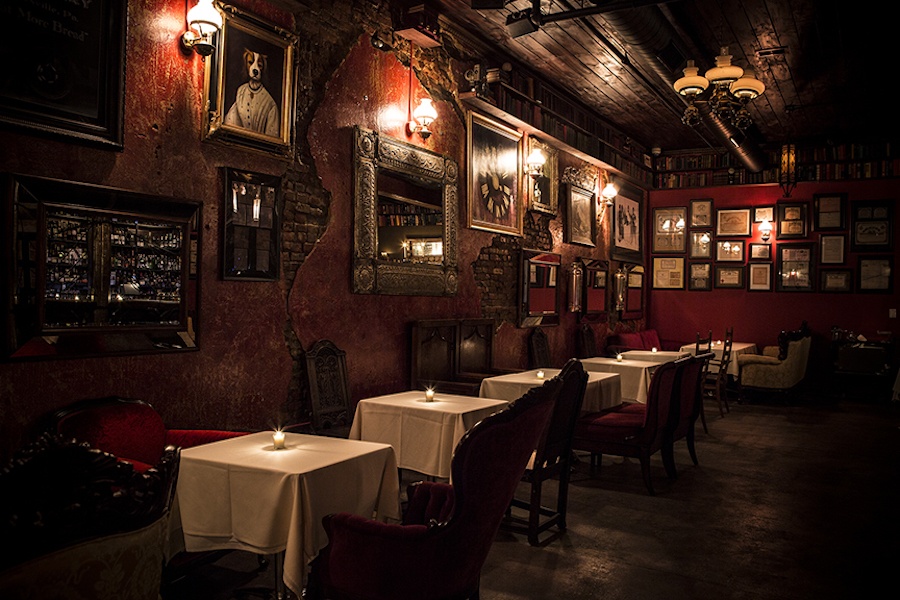 Howdy, buckaroos. And welcome to this special Labor Day Tuesday edition of the Monday news roundup.

I’ve got a whole bunch of stuff for you this week — parties, pop-ups, happy hours, food trucks, a brief film. So let’s get started with this: a re-opening date for one of the city’s best-known (and least understood) bars, Hop Sing Laundromat.

Way back at the beginning of the plague — even before the first mandates went into effect and the industry went into a tailspin — Hop Sing Laundromat shut down all operations. The Chinatown space with its nickel-topped bar and superlative cocktails has been dark ever since.

But a couple weeks ago, I started hearing rumors that it was going to re-open. There were going to be rules, of course (because Hop Sing always plays by its own set of rules), and no one knew how long this reopening would last (because of Hop Sing’s self-imposed restrictions and increased operational costs, I was told it was absolutely going to be losing money every night it operated — just less money than it loses by not operating at all). Even still, the staff and management really were looking at turning the red light on once again.

Now, though, I can tell you for sure. Hop Sing really is re-opening. And because it is the kind of place that it is, they decided to make this announcement via a short film. Check it out:

Nice, right? A little moody, but considering the circumstances and the state of the world, appropriately somber.

So here’s the deal: Hop Sing will be reopening this Thursday, September 9th. As always, they’ll start answering the door at 5 p.m. and stop … pretty much whenever they feel like it. You want to come inside? You’ll have to follow all the normal rules that have been in place from the start, plus show up with your official proof-of-vaccination card in hand. No, a picture on your cell phone is not acceptable. No, not even if it’s a picture of you holding it with the needle still in your arm. No, a note from your doctor or some bullshit, bought-it-off-the-internet fake thing with your name signed in crayon won’t do. The actual card.

Oh, and your ID, too. You always needed your ID to get into Hop Sing. Doesn’t matter who you are. Regulars, friends, Philadelphia magazine restaurant critics, even former governor Ed Rendell — everyone shows ID at the door.

Hop Sing has brought back their entire staff for the re-opening, all vaxxed and ready to work. Even still, the bar is going to be running at 50 percent capacity until the pandemic is over (or economics take their cruel toll). And it wasn’t like Hop Sing was ever crowded before. It was a place that valued space and the privacy of its guests, so tables were widely separated. Now, though, they’re only going to be allowing in about 25 people — in a room that’s roughly 3,300 square feet. Basic math says that’s 132 square feet per person. Granted, some of that space is taken up by the bar, tables, storage, a billion bottles of high-end whiskey. But still, it allows for an impressive amount of social distancing.

Speaking of high-end whiskey, it looks like the prices for cocktails might be a bit higher as well — something like an additional $1 per drink. Hop Sing has always been a bargain, considering the quality of the cocktails, the kind of bottles they keep in the wells (and the even more impressive collection on the wall behind it) — so this won’t likely be a hardship to anyone accustomed to drinking there. But as an example, that Booker’s bourbon the bartenders pour on the regular? It used to cost around $70 a bottle when Hop Sing had it in the well in the Before Times. These days, the same bottle runs $94.99.

Hop Sing will be serving Thursdays, Fridays, and Saturdays for the time being. I was told that they’re hoping to keep this up for a while, but that no one is making any promises about being open past May of 2022 — which would be the bar’s 10th anniversary.

Oh, and also? If you’ve been banned in the past, that list is still very much active. There was something like 5,000 names on it on the day they turned out the lights, and if you were one of them, that lifetime ban still stands.

For everyone else, though? Bottoms up.

LVD Hospitality, the team who brought Scarpetta to Rittenhouse Square, is at it again. This time, they’re bringing an original, high-end Italian concept from another city to our … fair metropolis … because …

Wait a minute, that’s exactly what they did last time. No, really. Read that review I linked above.

But sure. Why not? I mean, if there’s anything Center City needs right now, it’s another Italian restaurant, right? So here we go with Dolce Italian — a concept road-tested in Atlantic City and Miami, now being brought to the ground floor of the W Hotel at 1439 Chestnut Street. It is “bringing elevated, yet approachable Italian cuisine to Center City,” according to its press, along with “a unique offering and contemporary environment that will complement the city’s robust culinary scene.” We’re talking eggplant parm, veal Milanese, whole branzino — things anyone here would be hard-pressed to find without, say, two minutes on the Google and a 10 minute walk from literally anywhere.

But I promised that these columns would be positive. That in these trying times, I would try (mightily) to highlight the good things happening in our battered, busted-up scene. So let’s find the good in this, shall we?

Here’s something: Dolce Italian has an experienced, local hand at the stick. Terry White (ex of … pretty much everywhere that’s serves steaks, but most notably, the Palm, Urban Farmer, Union Trust, plus various hotels and casinos) is on the books as exec, so that’s nice. The whole thing is designed to look like an interior from a Fellini film — specifically Rome in the ’60s — and the bar is being used both for espresso and coffee service during the day and as a spot for apertifs, digestifs and Italian cocktails at night, in hopes of luring in Center City foot traffic rather than just depending on guests at the W who are afraid to leave the property. Also, being a hotel restaurant, Dolce will also be serving breakfast. And while we may have more than enough places in Philly to get spaghetti, I welcome any additional lemon-ricotta pancakes to the scene with open arms.

Dolce opens for limited, dinner-only service tonight and tomorrow. Lunch service for the public starts on the 9th (with that breakfast still only available to hotel guests). But full-on, three-a-day service starts for everyone on Tuesday, September 14th. All snark aside, I’m wishing nothing but the best for Dolce. Because anyone who’s taking the risk of opening right now and trying to bring some action back to this scene is a hero. 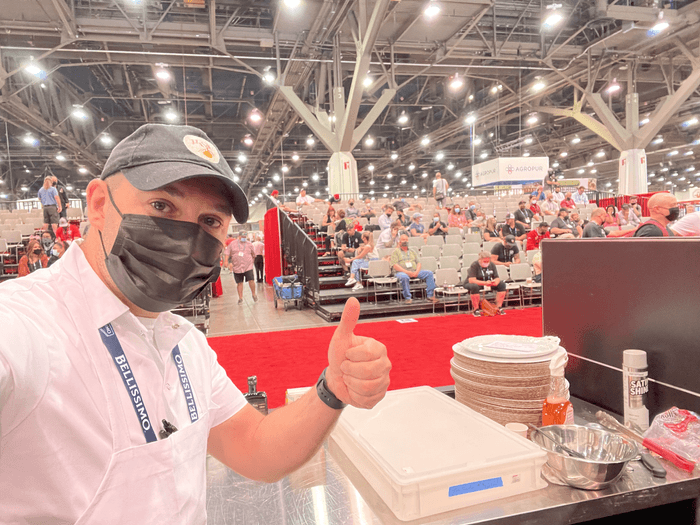 Yes, that’s a real thing. Yes, it happens every year. Yes, they DO take it that seriously. But wait. It gets weirder.

Because Joe is who Joe is, and because he takes pizza even more seriously than most, simply getting to Vegas to compete was no small adventure. Because his dough is long-fermented, he had to make it here in Philly, slork it into a container, put that container in an insulated backpack and then try to explain to the TSA agents at the airport exactly why he was trying to carry a backpack full of fermenting dough onto a commercial airliner for the five-hour flight to Nevada. I’m guessing this would’ve worked in precisely no American city other than Philly, but here? The agents shrugged, thought that made perfect sense, made him unwrap it so they could get a good look at said dough (and test it to make sure it wasn’t some kind of very unusual bomb), then waved him on through.

Good thing no one was checking out his suitcase full of mozzarella from Claudio’s in the Italian Market, San Marzano tomatoes, olive oil from Sicily and 00 flour. But seriously, had this plane gone down, Lost-style, on some magical deserted island somewhere, the surviving passengers would’ve been well-fed for the first few nights.

Anyhoo, Joe (and all his pizza supplies) made it to Vegas where he competed against 90 chefs from all across the world in two different categories — traditional and Neapolitan. He placed 2nd in both the Northeast division and the Neapolitan division, being beaten by just fractions of a point by Alfredo Papalardo from Catania, Sicily. And seriously, if you’re going to be beaten in a pizza-making competition, there is absolutely no shame in losing to a guy named Alfredo Papalardo who came all the way from Sicily just to compete.

Needless to say, Joe is happy. The Cicala team is thrilled. And they’re throwing a pizza pop-up to celebrate their near-victory in Vegas. It’s gonna be Sunday, September 12th, from 11:30 a.m. – 3 p.m. at Cicala. Indoor and outdoor seating will be available, and you can grab a reservation right here.

Getting High in Old City

It looks like Hop Sing Laundromat isn’t the only bar coming back this week. Stratus Rooftop Lounge on the 11th floor of the Hotel Monaco is also targeting September 9th as its re-opening date after almost a year of being dark.

They’re hosting an invite-only shindig early in the evening, but are throwing open the doors to everyone at 7:30 p.m. for drinks, music, small bites — the whole deal.

During the closure, Stratus has done some re-decorating. So there are now two private pavilions with booth seating, a renovated bar overlooking Old City, a lush “green wall” and new menus both for cocktails (courtesy of lead bartender Chris Devern) and snacks (thanks to chef Jonathan Dearden).

Stratus is planning on having DJs spinning every Thursday. For the moment, hours are Thursdays, 5 p.m. – midnight, Fridays, 7 p.m. – 2 a.m. and Saturdays, 8 p.m. – 2 a.m. And it looks like they’ll be adding a Wednesday night service soon, too.

And Finally, Beer and Food Trucks

Last thing before we say goodbye this week: Evil Genius is having a food truck festival. It’s part of a series of 10 parties they’re throwing to celebrate 10 years in business, and this one (like, it seems, everything else this week) is happening on Thursday, September 9th.

From 6 to 9 p.m., they’re going to be shutting down Front Street around their Fishtown HQ (1727 Front Street) for a big-ass party. Evil Genius will be providing the beer (natch), and a whole bunch of local food trucks will be handling the grub — everything from Lokal Artisan Foods and French Toast Bites to Lil Pop Shop, Bake’n Bacon, Dr. Wutzit’s Wonderballs, Red Stone Pizza, Chik’n & Things, and Calle Del Sabor.

I totally made up one of those food trucks, but I’m not telling you which one.

Seating will be available outside, inside and in the Evil Genius Beer Garden. Wanna come in? Show up with proof of vaccination. Those are the rules. Evil Genius will be pouring a limited selection of their new Sheetz collaboration beer, “Project Vanilla Shteam Machine” (a name I did NOT make up). For the Gram glitter beer will be back as well. There’ll be corn hole and can jam. Kids and dogs are welcome. There’s no charge for admission, but food and drinks are pay-as-you-go.

So if you’re in the neighborhood (and not already headed for one of the other openings and/or events happening that night), why not drop by and wish the Evil Genius crew a happy anniversary? I’m sure they’d appreciate it.