Our ranking of the best things to eat and drink this month. 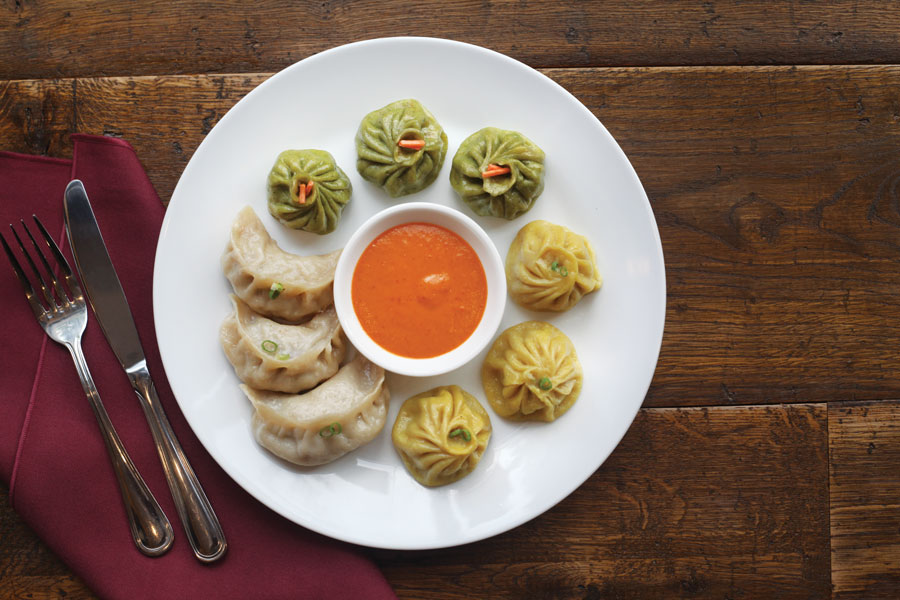 1. Prawns and sherry at Alpen Rose

Three head-on, fire-grilled prawns served with a shot glass of fino sherry so that once you’ve eaten their buttery flesh, you can dunk the heads in the sherry, suck them dry, and use the sherry-prawn cocktail as a chaser. So European.
116 South 13th Street, Midtown Village.

2. Mangalica pork at the Refectory

Mangalica (say “mahn-ga-leets-ah”) is a hairy, ugly breed of Hungarian pig. It’s one of the fattiest pigs on the planet — sort of the Kobe/wagyu of the hog kingdom — which means ridiculous flavor. The kitchen at this new eatery — on Villanova’s campus! — simply grills the bone-in chop and plates it with brandied apples. Anything more would be overkill. 862 East Lancaster Avenue, Villanova.

This Brooklyn import has square pizzas that aren’t too thick, Mason-jar desserts, and this must-order app of potato-chip-like slices of eggplant topped with marinara and cheese. 632 South 5th Street, Queen Village.

Tibetan momo, one of the world’s great dumpling wonders, are hard to find here — which is why White Yak is such a welcome addition. The combo platter gets you pretty much every kind of dumpling they make. 6118 Ridge Avenue, Roxborough.

James Matty, the James Beard-nominated chef behind those ridiculous Lebanese crullers at Suraya, is showing off his Mexican pastry game at this new addition. Go for the concha bread, which is stuffed with guava, coconut and cheese and lives up to every expectation. 31 South 19th Street, Rittenhouse.

While all you idiots squabble over Popeyes vs. Chick-fil-A, we’ll be here, happily munching on the Lovebird, a local, pasture-raised version of the chicken/pickle/special sauce sandwich that’s way better than its mass-produced brethren. 19 East Oakland Avenue, Doylestown.

Chef-owner Rich Cusack roasts a whole Scottish grouse, parades it through the dining room on a cart, and then carves it while using an antique press to make a sauce out of the juices. All of this fanfare happens right at your table, in a tiny South Philly BYO, no less. 1911 East Passyunk Avenue, East Passyunk.

8. Fancy-schmancy chocolate from the Chocolate Alchemist

For more than 24 years, Robert Campbell has been making bean-to-bar chocolates out of the back of his wife’s Venezuelan restaurant, Sazon, in Spring Garden. He recently expanded his line to hand-rolled truffles. For a taste of the cutting edge, follow along on Instagram (@chocolatealchemist) to see where Campbell’s popping up in Philly. Or you can buy the goods online at chocolatephilly.com.

Published as “The Menu” in the December 2019 issue of Philadelphia magazine.