Defined Hospitality — a seemingly out-of-nowhere restaurant group — is poised for big things. Next up: Rittenhouse. 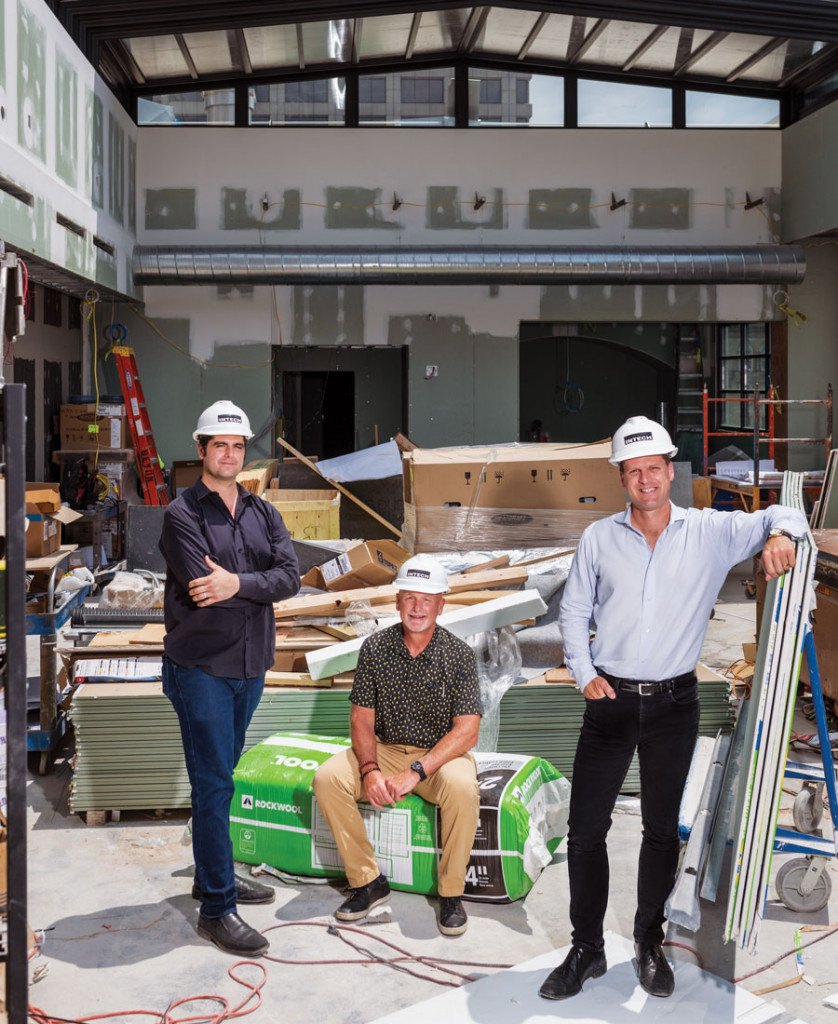 It’s a gray Wednesday morning in June, and the air feels like chicken noodle soup. Everyone on the street is sweating through work clothes. I am, too, as I stand at 19th Street where it intersects with Ludlow, staring down the barrel of the small alley. I’m familiar with this sliver of Center City for two reasons: one, because it’s directly behind Philly Mag’s old offices; and two, because it’s notorious for its illicit massage parlors. Last year, a police sergeant called the block “Philadelphia’s version of a red-light district.”

Greg Root, Nick Kennedy and Al Lucas are standing next to me, Root somehow in a blazer, Kennedy in a black button-down, and Lucas wearing his “I’m opening a Mexican restaurant” shirt, patterned with cacti and whatnot. They’re here to check on the construction of their latest projects: a Mexican restaurant called Condesa, a rooftop taqueria called El Techo, and a coffee shop called El Cafe, all to be housed in the new Pod Philly hotel in Center City, which happens to be on the same block as those massage parlors.

If you’re wondering how three middle-aged white guys you’ve never heard of are opening a big-deal hotel project, you probably aren’t alone: This trio, which is behind some of the buzziest eateries in Philly right now, actually likes it that way. You may not recognize their names, but you know their restaurants. Suraya, Pizzeria Beddia and R&D have done their part to cement Fishtown’s status as Philly’s coolest restaurant neighborhood; they have ridiculous wait lists and have garnered national attention from Bon Appetit and James Beard, to name a few.

We step into the elevator and head to the top floor of Pod while the three men explain how this very raw space will be transformed into El Techo, and how it will be something special. And then they show me. Root gets a guy to flip a switch, and the flat roof begins to retract, the glass panels folding into each other like a telescope. It’s quiet and quick, and in less than a minute, we’ve been teleported to a penthouse roof deck in, maybe, Tribeca? You’ll be able to sip rare mezcals here no matter the season.

It’s clear this next move is a big deal for Root, Kennedy and Lucas. It’s the group’s first time operating F&B for an entire hotel, the first time they’re opening a restaurant outside of Fishtown, and the first time they’re breaking from the hit-maker formula they’ve developed of building their restaurants around particular visionaries rather than concepts. It’s a high-stakes moment. “I love working for big ideas,” says Lucas, and you know he’s not just talking about the roof.

Four years ago, none of these guys owned a restaurant; none of them even had a partnership stake in one. But that makes sense. They’re ambitious but also patient; they’re ready for their success but knew all along that their time would come. Root, 41, spent 13 years working for Stephen Starr, going from a manager at Jones all the way to director of restaurants for the entire company. Lucas, 59, is a 30-year restaurant vet who spent a decade as an executive at Starr Restaurants. That’s how the two met: Lucas hired Root in 2002. Root, in turn, brought Lucas into his restaurant group in January and still calls him his mentor. “He simply made us better, and that’s what we were looking for,” says Root. “Someone who’d help us — who’d help make the entire company better. Because we know what we know, and there’s a whole lot we don’t know. We know we’re better as the sum of our parts.”

In 2011, Root helped Starr open Frankford Hall, learning about construction, build-outs and openings in the process. Seeing as Frankford Hall was one of the first New Wave spots on Frankford Avenue, he made some invaluable connections along the way.

One night, he was making his rounds at the beer hall when he got to talking with a guest. As Root tells it, he could just intuit that the customer was an industry guy. He was right; Nick Kennedy, now 39, had been a chef on the fine-dining circuit in New York (Del Posto, Jean-Georges, Scarpetta) but moved to Fishtown with plans to open his own spot. And when a chef trying to open his own restaurant talks to a front-of-house guy trying to open his own restaurant, it’s sort of inevitable that they’ll open a restaurant together.

The pairing worked. The two played off and respected each other’s talents and domains. Root’s upbeat temperament and problem-solving experience meshed well with Kennedy’s strong culinary vision and even-keeled attitude. Root understands the value of good food but doesn’t pretend he knows how chefs do what they do. (In fact, if you’ve been to Suraya, he has most likely run food to your table, telling you how good the hummus is as if he hasn’t tasted it a million times.) Their spot, Root, a Mediterranean-themed restaurant and wine bar, debuted in 2016 two doors down from Frankford Hall.

The location wasn’t a coincidence. Root was a manager at the Continental in Old City when he first met developer Roland Kassis, who was a regular there; five years later, they reconnected because Kassis owned the space where Frankford Hall was to be housed. When Root was ready for his own place, Kassis was his first call. “He actually showed us the Suraya space first,” says Root, “but we wanted to start with something smaller, to find our footing.” Kassis became a partner, investor and strategic adviser to Root and Kennedy.

As the latter were getting the bar up and running, another project was being hatched. Kassis, with his brother, Christian, and sister, Nathalie Richan — co-owners of popular NoLibs bruncherie Café La Maude — had an idea and thought Root and Kennedy were the perfect pair to bring it to life. That’s how Suraya was born. The restaurant is a big deal. It’s ambitious, multifaceted, 10,000 square feet. It operates all day and has an outdoor space that feels like it could be in Santa Monica. More importantly, it’s personal to the brothers and Richan: It’s named for their grandmother and showcases the Lebanese food of their childhood in an upscale environment — a rarity in the United States, really. Just before it opened, Richan told me, “I want to show people that our culture isn’t just heavy rugs and belly dancing — that we can be modern and elegant, too.” Root and Kennedy recognize that soul and vision are precious and should be respected — and they built and organized a moneymaking, streamlined operation around the concept.

The formula also worked for their next project, Pizzeria Beddia, which opened earlier this year. You probably know that story: Pizza savant Joe Beddia operated a takeout shop in Fishtown with just three varieties of pies. He made only 40 pizzas a day. He had no phone. Bon Appetit declared his the best pizza in America in 2015 — and he still made only 40 pizzas a day. After five years, Beddia shut the place down and almost quit pizza entirely. But Kassis kept bugging him to open up a bigger spot in Fishtown, saying he knew the perfect guys to help him run it. That project was the catalyst for Lucas to join the team, in January.

Before Pizzeria Beddia opened, I asked Beddia if he was nervous about partnering with other people on such a personal enterprise. “Not at all,” he told me. “They should be nervous. They’re the pros. I’m the wild card.” Four months later, the Beddia buzz still hasn’t died down.

“I don’t think I would have opened the restaurant with anyone else but them,” Beddia says, “because they gave me full creative control. We didn’t do anything I didn’t want to do. If I went to Starr and said, ‘Instead of a triple markup on wine, we’re charging a one and a half markup,’ there’s no way Starr would have agreed to that. But they love it. They think it’s genius because people are drinking the wine, buying more than one bottle at a time.”

In the meantime, Root was rebranded as R&D, with a stronger, more focused concept that, again, was built around a singular talent: Aaron Deary, who’d quickly made a name for himself by creating inventive cocktails at Suraya. Root and Kennedy brought him in as a partner, gave him the keys, and charged him with turning R&D into the bar he wanted to see.

And that’s the magic of this crew. They’re a group of restaurant professionals who are able to trust those with big ideas — and turn those ideas into a reality.

That chance conversation between Root and Kennedy back at Frankford Hall wasn’t really just chance. When you work in restaurants, like I have, you develop a radar that detects other restaurant people. It has something to do with how they dress or speak, combined with a somewhat hardened demeanor. But my radar would overlook Root, Kennedy and Lucas completely. They aren’t typical restaurant people. One big tell: They aren’t running on ego. They’re nervous and realistic about the challenges they face. They’re opening a hotel restaurant in a city that’s allergic to hotel restaurants — and a Mexican one, which can be tricky from a 2019 optics perspective. Cultural appropriation is something they’re very conscious of as white restaurateurs. “It’s another very big space,” says Kennedy. “We’re going into a different neighborhood. The challenge of jumping into another cuisine is a huge responsibility that we feel we have to give respect to.”

Their newly formed restaurant group is called Defined Hospitality, and it’s a little different from most Philly restaurant groups in that it doesn’t have their names in it. That makes sense, though. Defined Hospitality may have three guys at the helm, but ultimately, those guys recognize that their strength is in the larger universe of restaurant people — investors, partners, “strategic advisers,” chefs, GMs, cooks, servers — they know and have assembled. Root, Kennedy and Lucas seem completely unconcerned with making it about them at all. They’re more into listening, teaching, steering. They don’t treat their restaurants as extensions of themselves, because they know they’re better as the sum of their parts.

Published as “In Plain Sight” in the August 2019 issue of Philadelphia magazine.