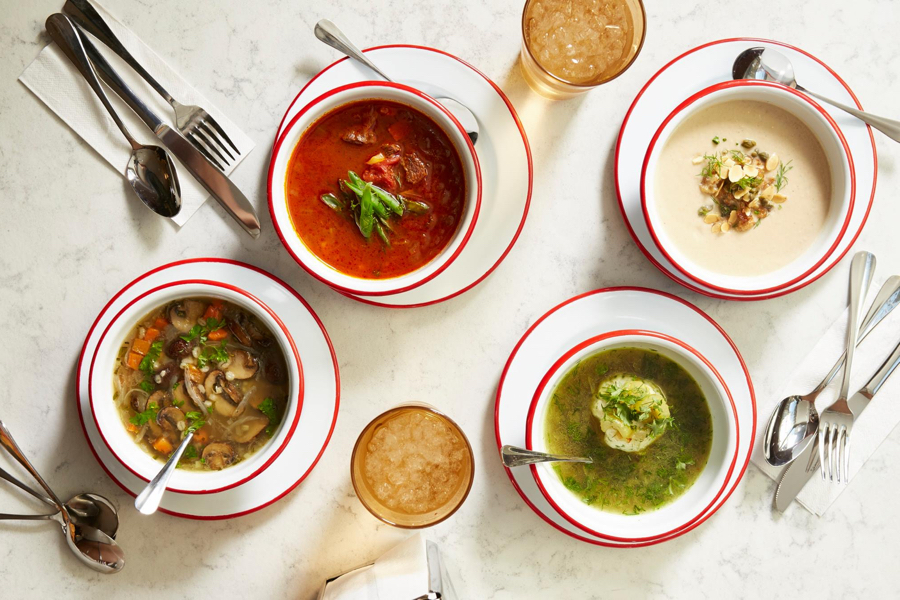 Restaurants can close for so many reasons. Mismanagement. Bad ideas. Landlords jacking up rents and cutting into already razor-thin margins. Unforeseen issues out of owners’ control, like fires, floods, or construction that can set a business back so far that even a beloved concept can’t recover.

But if the issues are fixable and the restaurant — due to a prime location, lots of traffic or the strength of a much-loved chef — isn’t entirely a lost cause, the owners might try to pivot. Stay in the same space, especially if there’s time to run out on that lease, but rework things a bit. Take a few weeks (or a few months) off. Go back to the drawing board, nix what’s not working, and reframe what is. Reopen refreshed with a new name, a new menu, a new vibe.

But a pivot doesn’t always happen because of negative factors. The chef-y, more upscale Fitler Dining Room was a concept that, ironically, became too successful, outgrowing owners Dan Clark and Ed Hackett’s vision for the cozy corner property at 22nd and Spruce. What they’d imagined as a comfortable neighborhood restaurant had become a special occasion spot and destination for diners around the city, with reservations and crowds shutting out the neighbors they’d hoped to serve.

So they closed Fitler and went back to the drawing board, landing what Clark calls “approachable, delicious Italian,” and Trattoria Carina was born. The transition went relatively quickly: over the course of a month, a design team from Shophouse revamped the space, the kitchen invested in a pasta machine, and management hired additional staff. 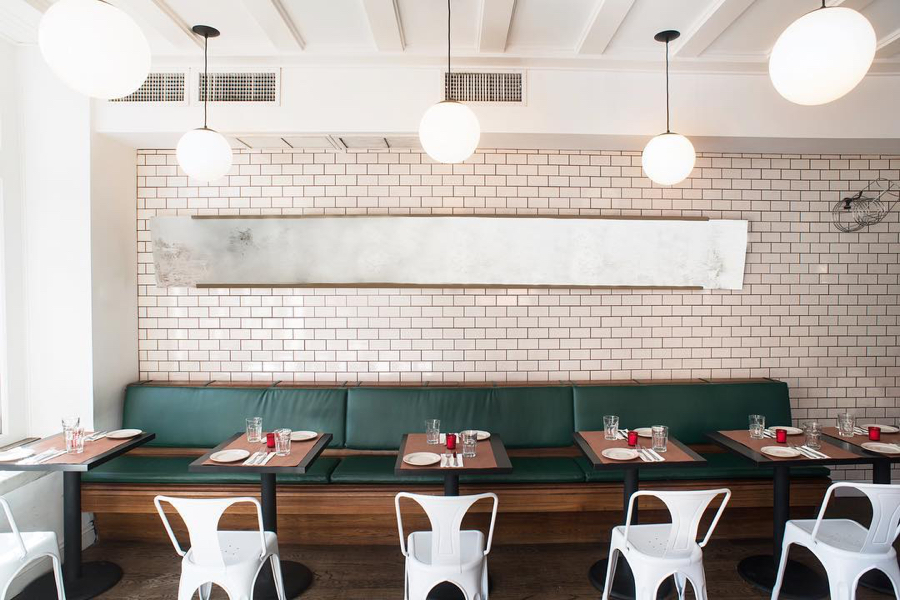 Since then, Trattoria Carina has earned high marks from critics while serving as a neighborhood standby the way its owners intended.

“Change can be the best thing, and it’s been really positive in this experience,” Clark said. “We’re excited about the future.”

That’s reflected in the dining room, where staff are seeing more regulars and families — not least because a concept with quality food and a high level of polish that not only welcomes but celebrates little ones at the table.

“Families love us because we treat them like guests who deserve the same service and attention that four adults with a Saturday night reservation at 8 p.m. deserve,” said Carina manager Bill Chenevert.

This is “one” of the cocktails on our most recent menu, dedicated to the 1950’s. Back then it was common for people to drink during their work day. This is our version of a “Three Martini Lunch”. Three different mini martini’s (Gibson, Martinez & Vesper) #rdphilly . . . . #vesper #gibson #martinez #threemartinilunch #imbibe #martini #craftcocktails #punchdrink #liqpic #chilledmagazine #imbibegram

Cafe service launched in late 2017, with much-lauded dinner service debuting last May. With Suraya in need of Root and Kennedy’s full attention, and with the wine bar’s tiny kitchen creating continuous logistical issues, the owners closed Root for the summer in 2018.

“We stepped back and took a look at what was best for the business and the employees as they grow,” Kennedy said. “The kitchen was a really tough environment to work in, and Aaron has just blossomed with us and knocked Suraya’s cocktail menu out of the park.”

Fall came around, and we learned what The Restaurant Formerly Known as Root was to become: a dark, sexy cocktail bar with drinks designed by bartender extraordinaire Aaron Deary and a tight list of bar snacks. In October, we learned that it would be called R&D, a nod to seasonally rotating menus that would pay homage to iconic themes and periods of cocktail history.

Sometimes, a restaurant owner’s personal vision shifts over time, and changes must be made to align what’s on the menu with their values. That’s what happened to Tom McCusker, owner of longtime West Philly taco mainstay Honest Tom’s.

‪ ‪We’re switching to a 100% plant based menu in July. ‬ ‪Same great food you know and hopefully enjoy, just minus the animals and plus some more plants.‬

After starting out with a food truck posted up at spots around the city, McCusker put down roots in 2011 with a brick-and-mortar spot on a strip of South 44th Street popular with the UPenn student crowd and neighborhood families alike. The business spend the next seven years turning out a short menu of tacos, burritos, and bowls, based around slow-cooked pork, beef, and chicken in addition to much-loved breakfast tacos.

But last June, McCusker dropped a bomb on social media: following a brief closure to make minor repairs to the space and switch out inventory, the menu would become 100 percent vegan. Some rejoiced, while others cursed the change — but you couldn’t really argue with the reasoning behind it.

McCusker had revolutionized his own diet, trying out vegan eating for a few weeks on a whim before going, er, whole hog on the idea when he realized how much better he felt.

“Once I started eating this way, I wanted to tell everyone about the benefits,” he said. “But how could eat like this and still sell a bacon burrito to the same guy  five times a week? I decided I didn’t want to keep selling the old menu if it isn’t what I believe.”

McCusker described the pivot almost as though he were starting a whole new business.

“It was on auto pilot. People would come in and order and leave,” he said. “It felt like I never really saw new customers any more, because everyone had been here a million times.” Now, the staff walks each guest through the new menu and the history of the shop, and customers are trying out a whole new menu.

Business at Honest Tom’s Plant-Based Taco Shop is good, McCusker says, despite a drop-off in die-hard omnivores. He’s leaning into healthy eating even more at the shop, installing an organic tropical fruit retail stand inside the store and launching a new plant-based meal plan.

In exchange for pledging to commit to a vegan lifestyle and $125, members are entitled to eight meals at Honest Tom’s per week from the main menu (excluding chips) and a series of decidedly non-taco plant-based meals like baked black bean falafel and raw pad Thai that McCusker is experimenting with. So far, around 50 people have signed up; he uses their feedback to test out new recipes that will soon rotate onto the regular menu (in the near future, tacos and burritos will still be available, he said, but as a limited part of a more eclectic vegan menu).

“It feels more like it did years ago, with more people coming to check out a new place or coming to us from across town,” McCusker said. He attributes some of the pivot’s success to sourcing good ingredients, an essential for plant-based cooking. “If you’re starting with high quality fruit and vegetables, it’s gonna be pretty good.”

And sometimes, a concept that’s well-intentioned and well-executed will need to take steps right the ship — even with one of the biggest and most successful names in the city behind it.

Michael Solomonov and Steve Cook announced way back in 2014 that they were opening a mission-driven restaurant that would utilize discarded chicken carcasses from sister concept Federal Donuts. All profits from the soup concept would be donated to Broad Street Ministry’s radical hospitality programming. It seemed that if anyone could make a not-for-profit concept successful, it was them.

After a Kickstarter campaign that raised $150,000 to jumpstart the project, Rooster Soup Co. opened in January 2016 with a menu of breakfast dishes, soups, sandwiches and salads, a rotating slate of dinner specials, and a Yemenite-spiced pot pie that we still miss in addition to beer, wine, and cocktails. The food was great and the place was packed, especially during the downtown lunch rush. 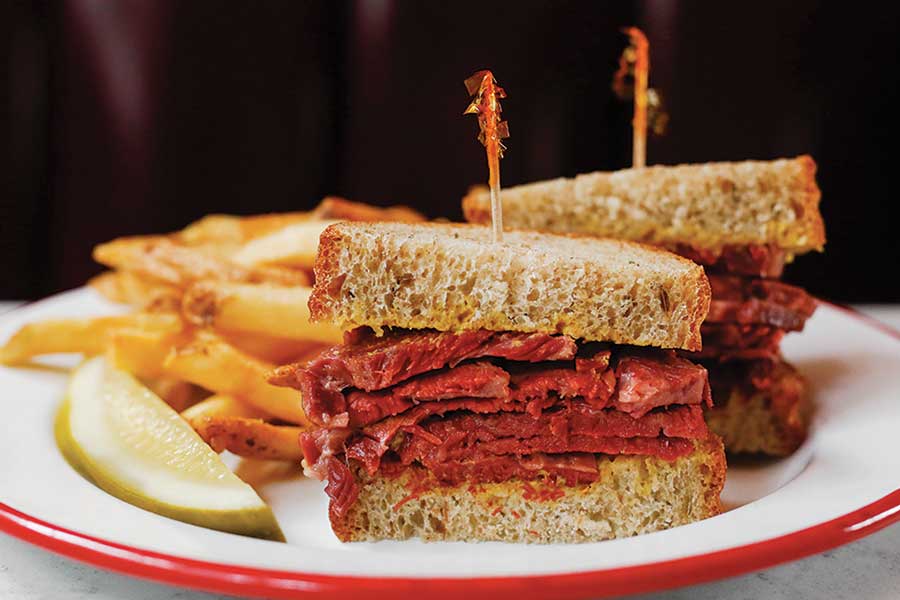 Corned beef on rye at the Rooster | Photo by Alexandra Hawkins

But Cook and Solomonov had originally envisioned something much smaller, a soup-focused stall, before they secured the Sansom Street location in which they’d eventually open.

“We pivoted even before we opened to having a fuller menu, but we kept the name,” Cook explained. With a midwinter opening, business started out strong, as you might expect for a concept with “soup” in its name. But once summertime rolled around, they realized the name was a liability.

“Despite offering a full menu, people weren’t coming in the door to see that, because soup in August for some people is a turnoff,” Cook said. “We felt like we needed to address that. It was difficult to deal with in addition to the usual seasonal issues restaurants experience.”

The owners also wanted Rooster Soup’s next evolution to have a stronger identity and connection to the other concepts in the CookNSolo brand, most of which serve Middle Eastern or Jewish diaspora cuisine. They’d had plans to do a Jewish deli for years, so they decided to refresh the menu and drop “soup” from the name last summer.

So far, Cook says, the transition is going well. Another recent adjustment, a change to counter service earlier this month, is designed to appeal to lunch customers with limited time to wait for a table. From a back-of-house perspective, it’s more in line with how the company’s other fast-casual concepts like Dizengoff and Goldie run and allows the staff to feed more customers during busy times.

While Cook said that management feels a responsibility to make the concept successful in order to continue supporting Broad Street Ministry, they don’t think of the mission-driven restaurant differently than their other concepts. “When things aren’t working, you have to make changes,” he said. “You can’t bury your head in the sand and hope things will get better on their own.”

Bottom line? Despite diners’ enthusiasm for the city’s seemingly ever-expanding restaurant scene, any restaurateur thinking about switching things up in hopes of greater success or a more purposeful vision has to be decisive — because we’re all watching.

“In a world with social media and the media’s eye on food like never before, you don’t have a lot of time to make changes,” Cook said. “You get one or two chances with a customer before they give up on you, so you have to move quickly and intentionally.”