Who the Hell Invented the Cheesesteak Egg Roll?

Uncovering the origin story of Philadelphia’s most far-reaching culinary export. 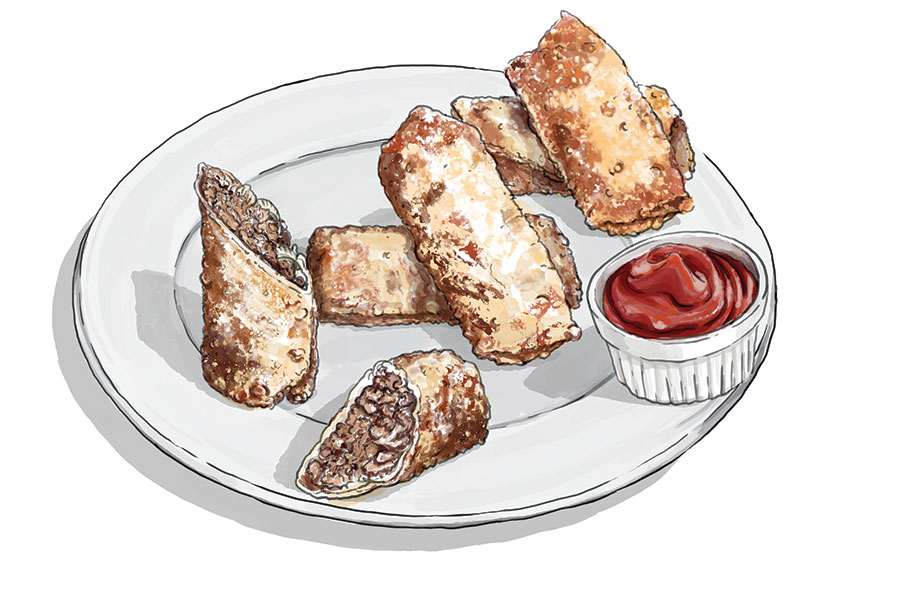 Illustration by the Ellaphant in the Room.

There was a time — barbaric and unenlightened, assuredly — before the cheesesteak. (What do you think “B.C.” stands for?) When Pat Olivieri grilled the very first steak in 1930, he charted a new course for meat-eating mankind. But then, innovation stopped. For the next 60 years, the cheesesteak received hardly a single refinement, dominating Philly’s culinary world with an iron-rich fist. That is, until the turn of the new millennium, when something else started popping up on menus throughout the city: the cheesesteak egg roll.

Historians have a theory called “multiple discovery” that says shared cultural context has more to do with invention than any act of individual genius. It turns out that a whole bunch of seminal creations were invented by different people simultaneously — calculus, the theory of evolution, the telephone, and our egg roll. But where’s the glory in that? By definition, someone had to be first. And when it comes to this fried roll, plenty claim the throne.

David Jansen, former chef de cuisine of the former Four Seasons, says it originated there in the mid-1990s. He says that one day, after an event, leftover cheesesteaks came back to the kitchen, and banquet cook Mui Lim rolled the meat up and tossed the result in the fryer.

Or could it have been birthed at Davio’s on Rittenhouse Square? Owner Steve DiFillippo recalls walking into the kitchen at some point in the early 2000s to find his staff eating the improvised egg rolls.
Just don’t tell Stephen Starr that. “I can tell you with no doubt, we invented the cheesesteak egg roll,” he says. He’d hired an NYC chef to develop menu items for his recently opened Continental in 1996 and says it was that guy (a New Yorker!) who dreamed up the roll. Starr remembers visiting the Four Seasons and seeing his cheesesteak egg rolls on the menu. “I was flattered,” he says.

Like all revolutionary inventions, the egg roll spread. By 2006, Citizens Bank Park was serving up an Aramark rendition en masse. The next year, the rolls migrated to a chain restaurant in Boston, and by 2011, you could order them at a Korean-American joint outside of Chicago.

Here’s the thing with that “multiple discovery” theory of invention:

It may well be true, but when it comes to collective memory, there’s only ever one winner, and it doesn’t always have to be the first guy. (You didn’t study Alfred Russel Wallace’s theory of evolution, did you?) Sometime in the 2000s, DiFillippo realized these bites of gold had wide-ranging appeal, so he trademarked the name and began to mass-produce them. You can now find Davio’s Philly Cheese Steak Spring Rolls in the frozen-food aisles of 6,000 stores, including 7-Eleven, Giant, and Dierbergs, a Midwestern supermarket chain. DiFillippo says he produces about a million rolls per month, then adds, “Stephen Starr hasn’t made a million spring rolls.”