Why is it so hard to run a restaurant in Philly? Basic math. 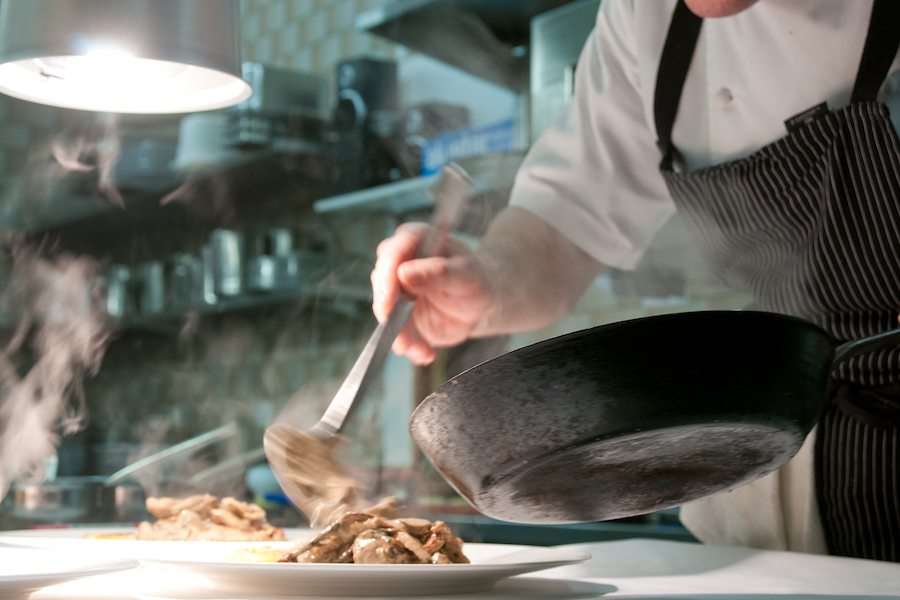 The great surprise of the Philly restaurant boom — an unprecedented decades-long jump in creativity, aesthetics and national prestige — is that the business of running a restaurant has never been more difficult.

Profit margins have shriveled over the last 20 years, thanks in large part to rising city rents and increased front-end costs for the design heavy restaurants of today. “Menu prices cannot keep pace with that,” says chef-owner Michael Schulson, whose restaurant group is among the most successful in the city. “Because our customers would rebel.”

The result is that even widely lauded restaurateurs are taking away ever-smaller earnings from their enterprises. The 15 to 20 percent margins of 20 years ago have dwindled to a mere 4 to 7 percent today. What do these thinner margins look like, from a restaurateur’s perspective, at the end of the day when the customers have all gone and survival is determined by the numbers on a spreadsheet?

“It can be pretty scary,” says chef-owner Eric Yost, of the Suburban Restaurant and Beer Garden, in Exton. “But you do the best you can and hope it works out.”

To give us an intimate view, Yost and several Philadelphia restaurant owners agreed to supply a cost-profit analysis of a single menu item (find them at the bottom of this post) to demonstrate how small their margins really are. Schulson, for example, costed out a tuna dish from Harp & Crown, which — after labor, rent, taxes and the rest —yields 98 cents. Yost shared a Cuban sandwich from his lunch menu, which loses $4 a pop. Yost says he produces the sandwich as a kind of loss-leader in hopes the diner will order a beer or cocktail or come back for dinner.

In fact, having a bar in a restaurant has an immensely positive impact on the business’s bottom line. It might not rocket its profits back up to the 15 to 20 percent range, but it could very well double them, says Chad Williams, chef-owner at Friday Saturday Sunday. Of course, liquor licenses are tough to come by — especially here in Philly.

Now, obviously, not all menu items result in minuscule profits. You know that fancy $13 salad listed at the top of the menu? It’s a moneymaker. Williams says that while many of his entree items make little to no money, other dishes  — usually the simpler, smaller ones — are designed to help soften the blow of the protein-driven ones that anchor the menu.

Point being, the restaurant business is tough. The recent struggles of chef Jose Garces are a case in point: A couple of big setbacks — the closure of the Revel casino, which housed some of his most profitable places, and cost overruns on a build-out for an Amada in New York — knocked his entire empire into bankruptcy.

These balance sheets give a good accounting of what it’s really like to run a restaurant, and why every eatery we enjoy is a far more fragile thing than the customer usually knows. 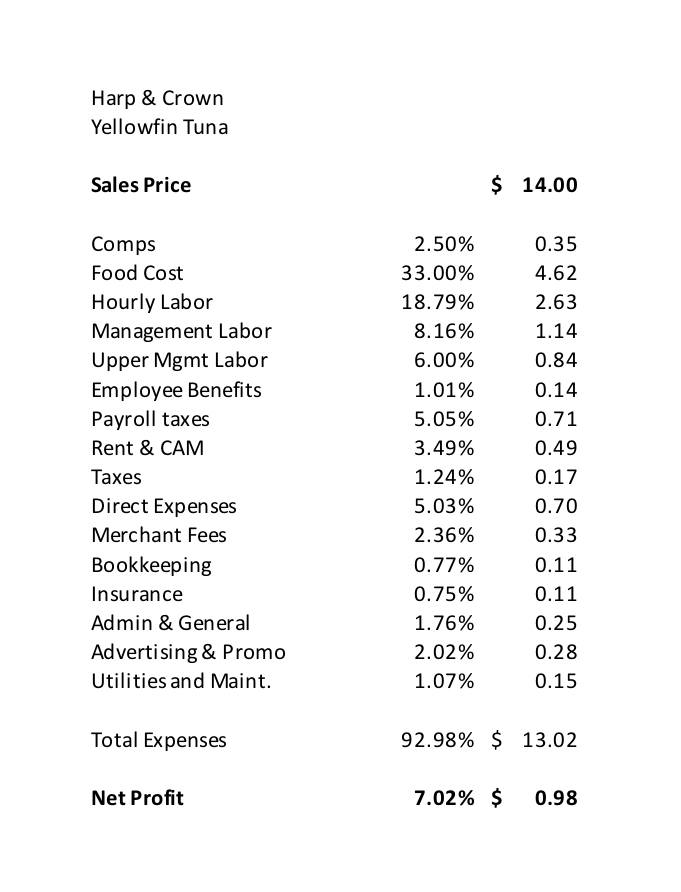 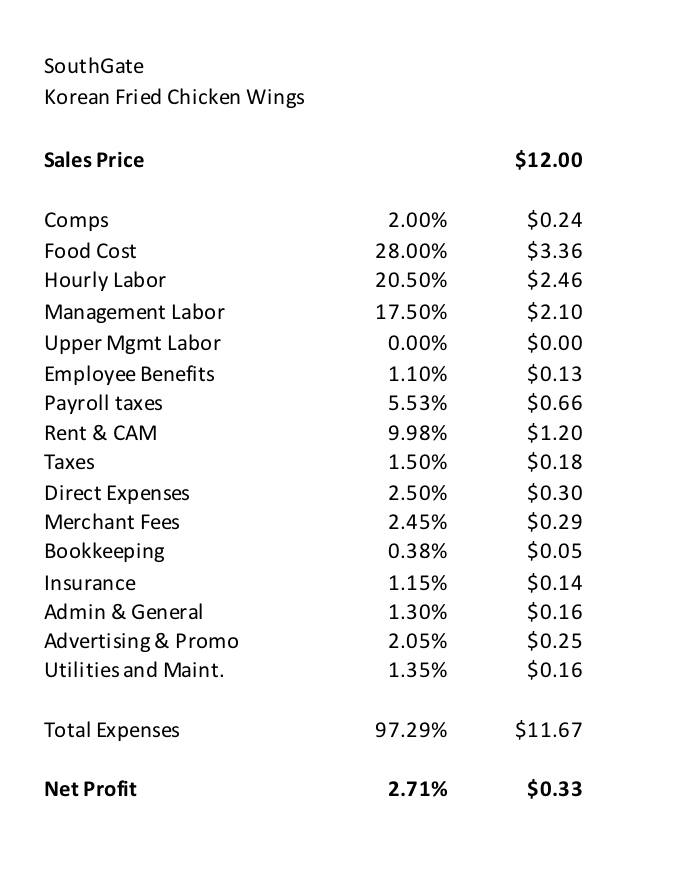 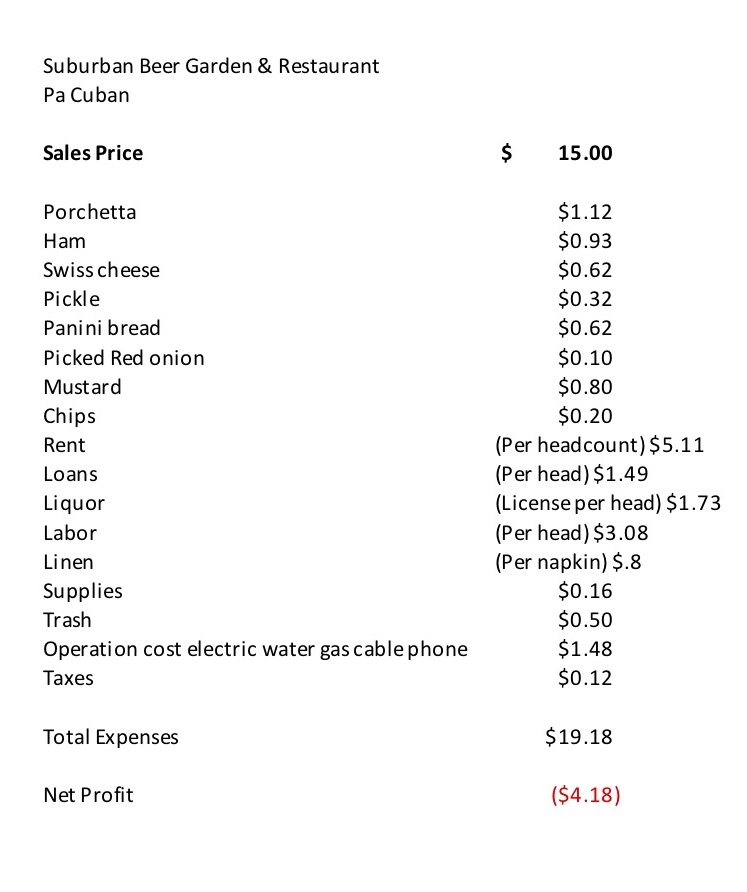