Controversy erupts after Joe's Steaks announces its anniversary promotions featuring other Philly food products. At least one brand wants out. 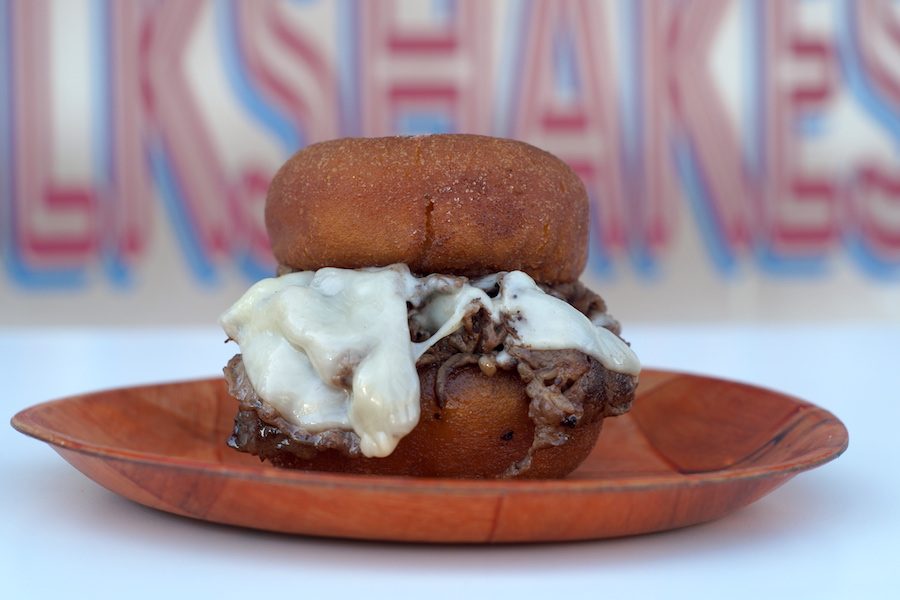 The Donut Cheesesteak with Federal Donuts that Joe’s was planning to sell.

On Thursday, we told you about a yearlong series of novel monthly specials at Joe’s Steaks to celebrate the original shop’s 70th anniversary, the idea being that Joe’s will pair its cheesesteaks and milkshakes with local products like Federal Donuts, Stock’s pound cake, and Lost Bread Co. pretzel rolls to create fun, Philly-centric hybrids.

After we published that article, Lost Bread Co. co-owner Alex Bois contacted us to complain and ask us to remove Lost Bread Co. from our article. A press release that went out stated that Joe’s would be selling a “Pretzel Cheesesteak featuring a pretzel bun from Lost Bread Co.” for $9.25 in October, as we reported.

“They aren’t a customer of ours and haven’t reached out to us at all,” wrote Bois in a message via Facebook. “So we are not at all happy to see our name used in promoting their brand.”

When we called Lost Bread Co. on Friday morning, the operations manager elaborated.

“We’re miffed with them,” she told us, adding that the bakery was working to reach out to other media outlets — some of which wrongly stated or implied that the Joe’s Steaks promotion was some sort of formal collaboration or partnership between Joe’s and the other companies — to get corrections made. “We have not been contacted at all. Until we have some sort of discussion with them, we would really prefer not to be a part of this.”

And Federal Donuts was also surprised to see Joe’s — formerly known as Chink’s — using the Federal Donuts brand as part of their promotions. Joe’s was planning to offer a “Donut Cheesesteak featuring two honey-glazed donuts from Federal Donuts” in June, according to the press release sent out on Thursday.

According to a source familiar with the situation, Federal Donuts was none too happy to see Joe’s using its brand, and on Friday, a spokesperson for Cook N Solo — the restaurant partners behind Federal Donuts — provided Foobooz with the following statement:

It is unclear which of the other brands, if any, have issues with Joe’s involving them in the anniversary promotions. But from a legal perspective, Federal Donuts and Lost Bread Co. might not have a leg to stand on, if it ever came to that.

After all, how many times have you been to a restaurant where a certain brand of a product is named. Can my local diner not mention that they’re using Hatfield bacon on the bacon-and-eggs platter? Can an ice cream parlor not advertise that their hot fudge sundae is made with Hershey syrup?

According to Philadelphia intellectual property attorney Jordan LaVine of law firm Flaster/Greenberg, Joe’s would most likely be protected by a legal concept known as nominative fair use.

“That says that you can refer to the trademark of another party if you’re using it to accurately identify the other party’s products,” explains LaVine, whose clients include Martha Stewart and the New York Times. “If they’re actually using Federal Donuts for their cheesesteak, then they can say so.”

LaVine says he frequently deals with issues similar to this in his work with the New York Times, which gets letters from companies demanding that the newspaper stop using their trademarks in Times stories. Philly Mag once got a similar letter from company behind Velcro after the magazine used the word in an article.

“In those situations, there’s nothing a trademark owner can do,” insists LaVine. “They’re just sending out those letters.”

LaVine does point out that Federal Donuts or one of the other brands could try to argue that Joe’s was commercially gaining off of the Federal Donuts trademark, but, he opines, if they’re actually buying donuts from Federal Donuts and not selling the Donut Cheesesteak indefinitely — keep in mind that this was to be a monthlong special — it’s going to be hard to persuade a judge to make Joe’s stop.

“Federal Donuts may be unhappy that Joe’s is using it,” LaVine says. “But the law does provide Joe’s with protections.”

A representative from Joe’s Steaks said that the company is working to resolve the matter.