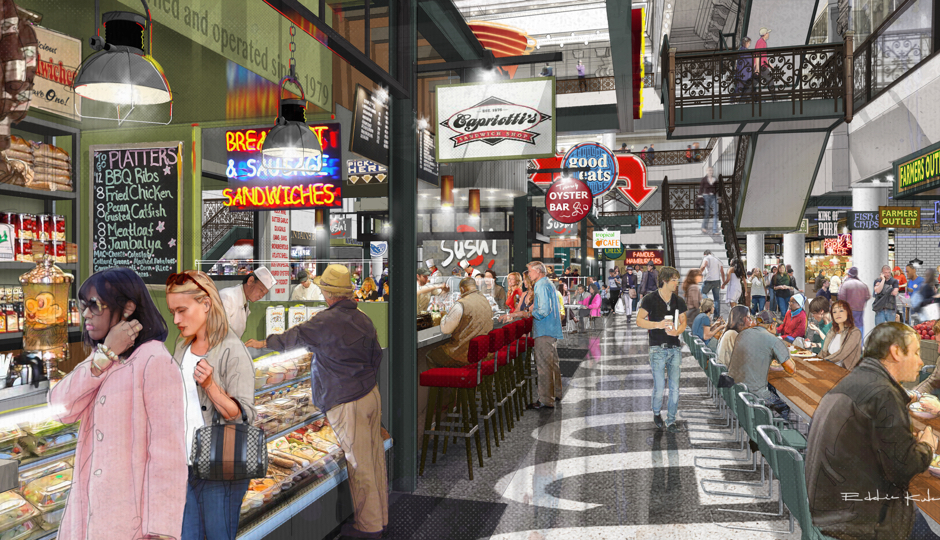 Rendering courtesy of The Bourse Marketplace

The full lineup of purveyors coming to The Bourse Marketplace — which includes restaurants and shops from the Philly region and a few newcomers to the area — has finally been announced.

A few familiar names are on the list of the chef-driven food hall’s tenants, like south Philly favorite Chaat and Chai, which closed up shop earlier this year in anticipation of the move, and Bluebird Distilling, the Phoenixville-based spirits maker that opened its first city tasting room at The Shops at Liberty Place in June of this year.

Other local spots coming to The Bourse Marketplace include Grubhouse, a comfy breakfast and lunch spot that was open at 23rd Street and Passyunk Avenue until a few weeks ago. And the stall at The Bourse will be the first brick-and-mortar location and foodservice venture for Westchester-based Vera Pasta, this year’s Best of Philly winner.

And there’s one Philly-based newcomer, too: Baby Buns, a “bun concept” from Maison 208’s Sylva Senat, that will offer “unique international flavors that redefine an American classic — the hamburger,” according to a rep. Okay then!

A few spots with locations in the Easton Public Market are opening Philly outposts in the new food hall, too: Olive With a Twist, a purveyor specializing in olive oil, fine cheeses, and charcuterie, will be opening its third location (there’s also one Frenchtown, with another in Basking Ridge, New Jersey). And Chocodiem, another Easton Public Market tenant, will bring its fine Belgian-style chocolates to The Bourse, too. Ka’moon, from the owners of Easton’s The Taza Truck, will serve fast-casual, halal Egyptian cuisine — an awesome get for a city with exactly zero Egyptian restaurants to its name right now.

Prescription Chicken, a soup restaurant, comes to The Bourse from Washington D.C. and offers soups from pho to classic chicken to vegan bone broth. And Pinch Dumplings has a stand in the Mt. Vernon Marketplace in Baltimore as well as serving several farmers’ markets and Nationals Park in D.C.

The Bourse Marketplace is anticipated to open sometime in summer 2018.