Out of the Clear Blue Sky: Maison 208 Reviewed 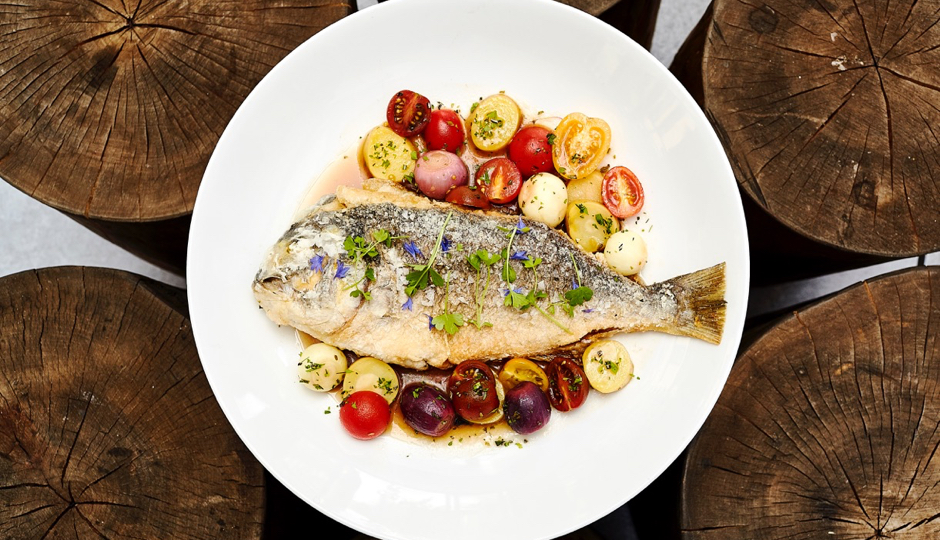 Upstairs, in the second-floor lounge at Maison 208, everything is a disaster. Beautiful, sure. With the retractable roof peeled open in a way that seems to defy possibility and the room’s pale colors and decorative birdcage chandeliers all arranged like something out of an unreleased Wes Anderson short, it looks lovely. The most Manhattan-as-designed-by-someone-who-has-only-ever-been-to-Los-Angeles space imaginable. The most sleekly modern in a city that wears modern like an ill-fitting pair of shoes.

ORDER THIS: The pork belly, some fries and the duck will make a perfectly respectable meal—chased with a plain old gin and tonic from the downstairs bar.

But it is a disaster. There are half a dozen bartenders crammed inside a horseshoe bar designed for one. And the cocktail list is the kind of thing that would make for a solid 10-minute set at Ha-Ha’s in Cleveland—a bizarre, almost satirical mix of things that aren’t meant to go in cocktail glasses. Like sweet peas, charcoal, echinacea and moss. No, really. There’s a $30 DIY gin and tonic, served with a golden ladle and flavored (to Sir’s taste, of course) from a tableside terrarium of herbs and moss. Or what about the 16-year-old Lagavulin sweating under a glass bell full of tobacco smoke, the glass riding to the table inside a cigar box, served with an actual cigar.

It’s flash. Sizzle. Showmanship from Sylva Senat (back from his run on Top Chef, in what’s meant to be his return to prominence in Philly’s food scene) in a space that was built for exactly that. Order the gin terrarium in the lounge when it’s crowded with beautiful people, and suddenly everyone else orders one, too—you can see the dim bulbs of copy-cat instinct lighting over every other table.

But God, that view. Perfect blue Philly sky, one towering finger of a building, breath of city air. It’s almost more than any of us deserve. Any of us who have ended up here, anyway. 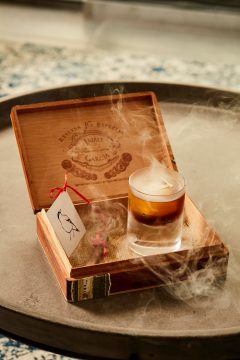 Senat was my hero a while ago. He opened the kitchen at Tashan and tried (hard) to show this town what modern Indian could look and taste like. He had a good run on Top Chef—lasting the longest of any rookie in a virgins-vs.-pros season. And Maison 208 is his new big swing—his statement about where he is and where we are, in place, in food. His French-inflected, Haitian-rooted post-fusion global sensibilities are burnished to a high and glaring sheen here. His kitchen isn’t just pushing the envelope. They’ve stamped the envelope, addressed it to the future, and put it in the mail.

But the future is stupid as often as it’s brilliant. Upstairs, there are tuna tacos—so 2008, but maybe due a comeback. And they’re fine as they are. But when served, they’re attended by a server wielding a perfume mister like some rogue Macy’s employee on a work-share. Platypus-eyed with ennui, she spritzes “organic champagne,” not on the tacos (that would be gauche), but in the general vicinity of the tacos. A meaningless gesture toward interactivity. As flavorless as it is, well, tasteless.

Downstairs, one of the big windows has been boarded up—a truck had smashed through it—and the plywood is throwing off the aesthetic of concrete floors, tin ceiling and marble tabletops, but no one seems to care. They’re here, after all. In this beautiful place with its frenched dorade and bowls of chilled tomato soup served with melon balls and an eyedropper. With its pork belly “griote a piklis,” which is the best thing on the apps menu (better, certainly, than the dull carpaccio or the sweet-potato and beef Haitian pâté lollipops that recall some of Tashan’s more daring departures). The pork arrives perfectly cooked, crisp and fatty at the same time, over an idealized deconstruction of slaw (just a few leaves of shredded cabbage painted with a spicy hot sauce) and a few grains of Scotch bonnet salt for heat and that psychic connection to the Haitian flavors that infuse everything Senat cooks.

The fries with black truffle and gruyère are fine for truffle fries (again, very much a ghost of New American Past), and the magret duck breast comes overdone and chewy but is saved by a Haitian coffee rub and a perfect (meaning classical, meaning correct) French béarnaise sauce that’s like drinking lemon butter. The millet cake on the side is dry. The foie gras on top of it is forgettable. But I get the self-reference. Ducks eat millet. It fattens their livers. Then we eat the ducks and their livers with a béarnaise sauce that makes us fat and swells our livers. Ta-da!

The strangest thing about Maison 208 is that the simpler the food is, the better. The oysters are perfect. The dorade, pan-fried and served whole over nothing more than a dark consommé and some root vegetables (no eyedroppers, no champagne mist), is an excellent piece of fish—meaty and ideally done. At its worst moments, this place is fun to laugh at and absolutely unforgettable in its pomposity. At its best, you have to wonder how the worst ever happened.

But it’s about balance, ultimately. Senat and his crew are pushing forward and pulling back at the same time, making a restaurant of both cuisine’s future and its past. In that tension is Maison 208’s greatest strength. And the source of all of its failures.

One Star: Come if you have no other options