This West Philly Artist Will Bring You a Surprise Pizza

My Pizza, My Idea! gets you a wood-fired pie, delivered when you least expect it. 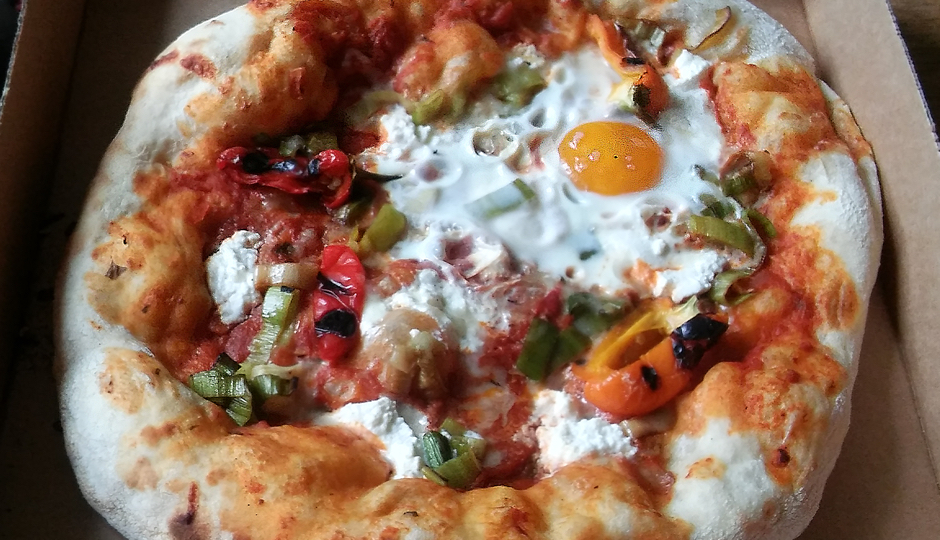 Wanna crush some ‘za but don’t feel like going outside? You’ve got several options for delivery, from schmancy chef-driven pizza through Caviar to your neighborhood pizza joint. With luck, you’ll be eating an ok-to-pretty-good (depending on your location and desired price point), still-hot pizza within an hour.

But where’s the fun in that?

Instead, you could let West Philly-based theater artist and performer Donna Oblongata bring you a pizza…sometime. Somewhere, at a location you’re likely to be (a little social media sleuthing might be involved). And there’s no telling what she’ll put on it.

That’s the premise of My Pizza, My Idea, a (roughly) annually recurring, one-month-only “ephemeral pizza company,” in which Oblongata and collaborator Patrick Costello take signups for surprise pizza deliveries made in an outdoor wood-fired pizza oven Oblongata built herself. 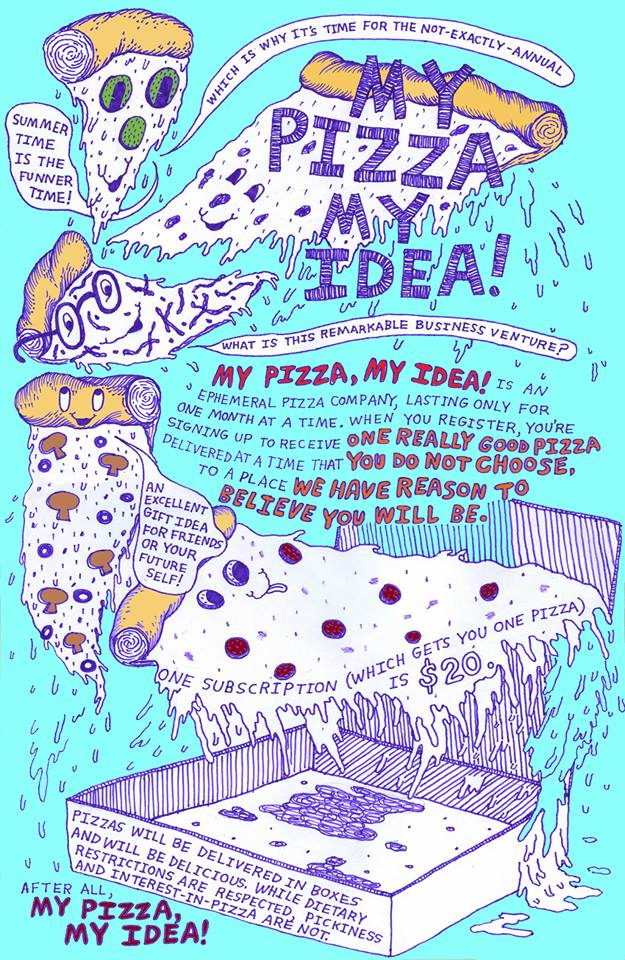 Simply fill out a Google form with info on times and days that you’re sure to be found at home, work — if a surprise pizza delivery won’t get you in trouble — and another location, like a friend’s house or neighborhood hangout. She’ll deliver anywhere in Philly, though locations outside the city require an additional fee. (Later this month, Oblongata told me, she’ll be taking a detour on the way to a New England road trip to deliver a pie in Rhode Island.)

There’s a field to include info on whether you can’t do dairy or meat, for example. As the poster says, “while dietary restrictions are respected, pickiness and interest in pizza are not.”

Finally, submit payment through PayPal. Donations for the subscription, which entitles you to one surprise pizza, start at $20, but you’re welcome to increase your support of the arts by adding to that amount.

Then…wait. You’ll get your pizza when (and where) Oblongata feels like bringing it to you within the monthlong delivery window. This year, she’s taking subscribers and popping up with unexpected pizzas through August 10th.

Oblongata started doing My Pizza, My Idea! about a decade ago, when she and some friends moved to small-town Massachusetts and had trouble meeting people. They set up a table at a punk show and offered the surprise pizza delivery for free to get to know their fellow residents. Since then, she’s brought back the project (with a fee) to raise funds for theater performances she’s organized.

“Now, it’s more of an art project than a pizza project,” she says. “People think it’s really absurd, but it’s not any more absurd than the fact that uberEATS will deliver McDonald’s to you at midnight wherever you live.”

For Oblongata, the project highlights questions around the absurdity of food and convenience at this moment in time, and “the premium we’re willing to pay to have everything on demand.”

With My Pizza, My Idea!, she says, “I want people to have a genuinely positive experience. Surprise and real-life interactions are important and precious, and that can get lost in a culture where surprise is sacrificed for commerce.”

My pizza arrived at breakfast time, right around 7:30 a.m. yesterday, about a week after I subscribed. My phone pinged with a text message that the pie was waiting for me on the first floor landing of my West Philly building. I ran downstairs — the stairwell was already suffused with a delicious aroma — and there it was. 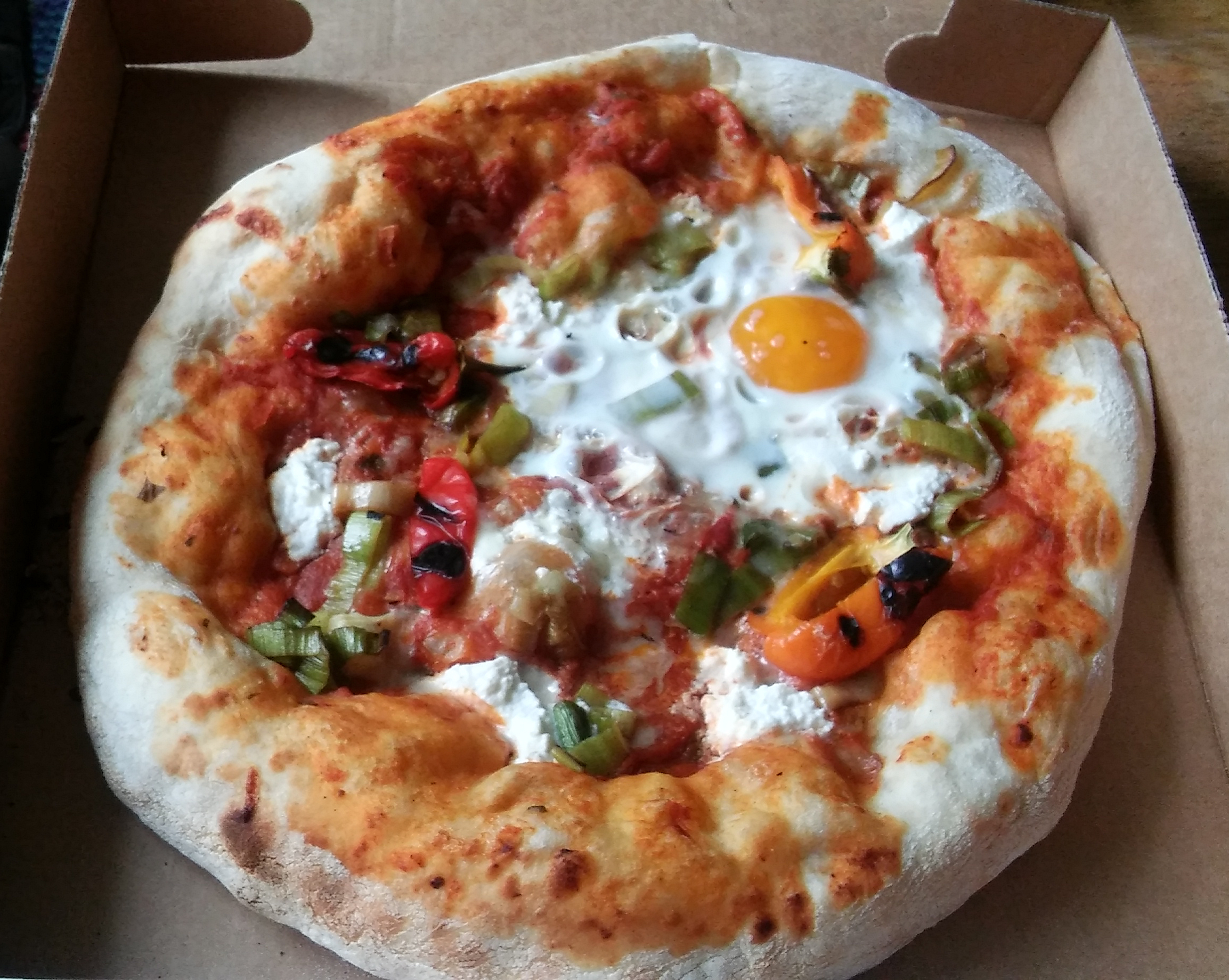 It contained a piping-hot, 12-inch pie. A just-set golden egg yolk greeting me like the morning sun amid tomato sauce, sautéed leeks, dollops of ricotta, and red and orange sweet peppers, grown in the pizza maker’s home garden.

I ran to the door, pizza box in hand, to see if I could catch a glimpse of the pizza fairy, but she was already gone.

So, element of surprise achieved, how was the pizza?

Damned good, that’s how. The toppings were tasty and fresh, with just a little spice from the peppers, and the egg was perfectly cooked. The crust was crisp and thin beneath the toppings and thick, crusty, and chewy around the edges. While the underside of one section had gotten a little extra-toasty, this pie was much closer to the Pizzeria Beddia end of the quality spectrum than the typical greasy, soggy pie available at most joints.

Sign up for a My Pizza, My Idea! delivery for yourself (or pizzabomb an unsuspecting friend) here.