Plus: His favorite Stephen Starr restaurant, his soda tax suspicions, and the one food that his three kids are always asking him to make. (Hint: It's not the bone marrow at Vetri.) 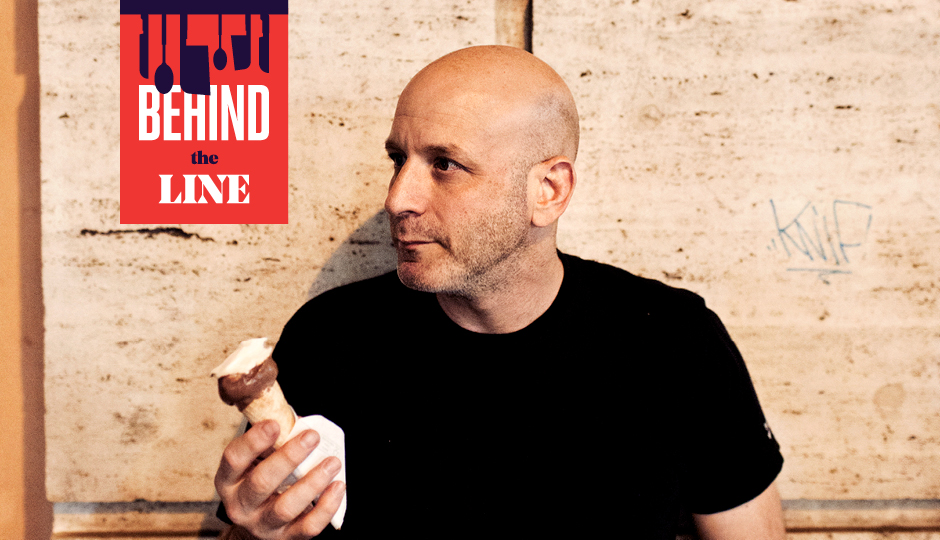 Behind the Line is Foobooz’s weekly interview series with the people who make up Philadelphia’s dynamic bar and restaurant scene. To read the previous Behind the Line, featuring the amusingly forthright Modo Mio chef Peter McAndrews, click here.

There aren’t too many chefs who can stroll into Alain Ducasse’s three-Michelin-starred Louis XV in Monte Carlo, sit at a table in the kitchen, and dine compliments of M. Ducasse. Such is the case with Marc Vetri, who brings his friends Jose Garces and Michael Solomonov to the Navy Yard tonight for Great Chefs, benefiting Alex’s Lemonade.

My full name is… Marc Vetri. I don’t have a middle name. None of us have middle names — my brother or my sister — for some reason.

My parents taught me… hard work, perseverance, and to never accept the word no. Just to follow my dreams.

I grew up in… Abington. And then I came to the city and went to Drexel for five years, from ’85 to ’90. Graduated with a degree in marketing and finance. It has served me well. There’s a lot of marketing and lots of finance in the restaurant business.

I learned to cook… probably for survival, since my mom is a horrible cook. I love her to death, but she can’t even reheat something right. I would starve if I had to rely on her. But my father is an amazing cook. He used to make these awesome weekend meals.

For breakfast, I usually… drink espresso. Every now and then, I’ll eat breakfast, but usually, I’ll have an espresso or macchiato, and I’ll just grab some biscotti or something and sit on the stoop, meander in my thoughts. I’m a stoop guy. I love the stoop. I’ll sit on the stoop all fucking day, and the Vetri stoop is awesome. It’s the go-to stoop. At 5 p.m., the sun is just like headlights over the buildings, shining right down on the street that we’re on. It’s just a nice little moment.

My first restaurant job around here was… in Margate at the Downbeach Deli. I was probably 14. I washed dishes for two summers, and I loved it. Oh my god. I used to hang out and watch the line cooks. I learned so much.

When I see people waiting in line at the Olive Garden… I want to kill myself. It’s a fucking disgrace.

In the kitchen, I love using… my hands. I am not a gadget guy. More hands, less gadgets. The more I can use my hands to make things, the better.

If you only order one thing at Vetri, make sure you get… the spinach gnocchi, but don’t get just one thing. Wash it down with the goat. For sure. There are a million things you gotta get.

One chef most people don’t know but should is… Joe Cicala at Le Virtu. I see a lot of similarities between the two of us. He’s not trying to reinvent the wheel. He has this love of Italy like I have. He’s always learning. Always pushing the envelope. 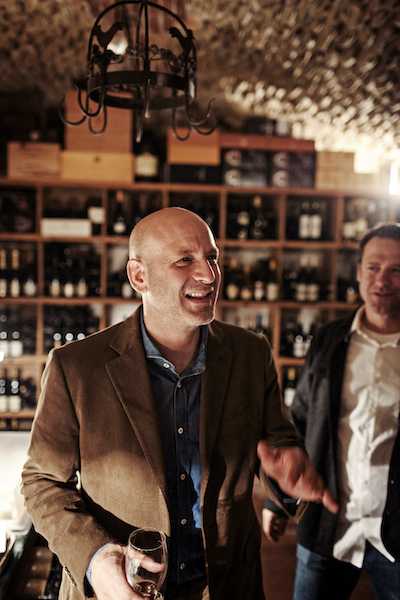 If I wasn’t doing this, I would probably be… A musician. I’ve been playing guitar for about 40 years, since I was about ten years old. I was in a couple of bands, and I actually moved out to Los Angeles to go to music school. I have about 15 guitars, and I play every day.

The last time I had hair was… when I shaved my head in L.A. in 1993. I was losing my hair. It was thin. But I still had lots of it. It was long. And then I lost a bet on the Super Bowl or something, and I had to shave it. And I just left it.

Yelp is… a fucking nuisance but also an opportunity, because every now and then you’re going to find someone who writes something on there that’s actually really insightful. You can start a dialogue. And maybe you can fix the issues.

If I could change one thing about the restaurant industry, I would… change the narrative to make it more the story that you can have a nice life and raise a family in this business. You don’t have to just work horrible hours for not a lot of money. There’s a false narrative out there that is making a lot of folks not go into the industry. I’ve worked very hard and missed many holidays and friends’ weddings and all that, but I’ve always felt satisfied and happy. I would like that to be the narrative. And it is basically on us, the restaurant owners and chefs, to switch that around.

One Philly restaurant I’ve been dying to get to is… Pizzeria Beddia*.

One Philly restaurant I really miss is… Le Bec-Fin. That level of service and food is harder to come by now, and there’s a necessity for it.

The last time I ate fast food was… 48 hours ago, if we’re talking about what is fast food today. I went to Dizengoff. It doesn’t get any faster than that. Super healthy, super thoughtful, super delicious food. Fast food of this age is not fast food of 15 years ago. In that respect, I eat it all the time. Shake Shack is fast food, but it’s nice meat, nice ingredients, nice atmosphere. As for the other kind of fast food, I don’t even remember.

If you’re pouring me a drink, make it… an Aperol spritz.

The most famous person I ever cooked for was… Mick Jagger. The Rolling Stones were in Philadelphia, and he ate at Vetri. It was awesome.

Food bloggers are… writing about food right when it’s happening. There’s some interesting stuff. I read food bloggers’ articles more than I read a lot of magazine and newspaper articles anymore. You go on the internet, and it’s just right there. Not everyone is waiting for the New York Times restaurant review. There are already a million things about the restaurant by the time that comes out.

One day, I would love to open… a jujitsu studio. I would love to teach jujitsu. I’ve been doing it for eight years. Other than the physical benefits, it reduces stress, puts your mind at ease, and it makes you think about things. It’s like chess for the body. And you can use those skills in everyday life.

My favorite Stephen Starr restaurant is… Le Coucou. It’s amazing. The French version of what we do at Vetri. 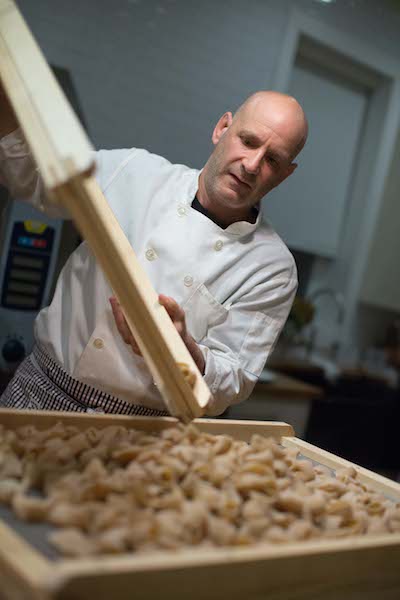 You should really be grilling more… mushrooms.

People who say that Vetri is absurdly expensive… don’t really understand what goes into it all, all of the little fine details and nuances about the room, the service, the ambiance, the studying, the research. All that stuff is expensive.

My decision to sell part of my business to Urban Outfitters was… a well-thought-out and very hard decision.

If you want to come work for me, you better have… a sense of urgency.

The next big restaurant trend is going to be… everything using fresh milling, fresh milled wheat, milling onsite. If affects the flavor, the freshness, the nutritiousness. We mill everything at Vetri.

My favorite burger in Philly is… still at Village Whiskey. I went there a month ago, and it is still a great hamburger.

My three kids are always asking me to make… pizza. They always want pizza.

*Editor’s note: Vetri wound up going to Pizzeria Beddia a few hours after we spoke with him: