Not Built For Love: 24 Reviewed

The Garces Group’s new all-day Walnut Street cafe shows what can happen when a restaurant does everything right. 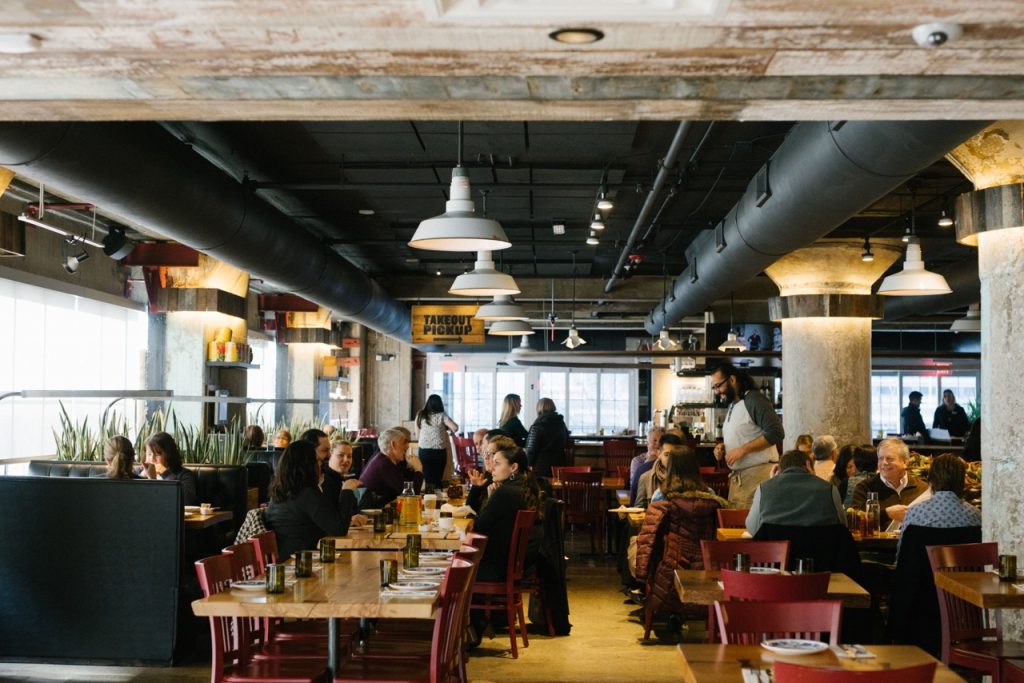 On the floor at 24, the servers moved like they were on rails, following paths just a couple months old but already worn into the floor. They worked with pass-coverage eyes—heads up, eyes on their zones—and they were quick with the water-pour, the plate-clear, touching each of their tables, huddling on the kitchen’s open line and then rolling back out again, laden with plates.

On the tables, no cutesiness. The silverware all matched. The glassware was all polished, simple, plain. The plates were white. Each thing was designed for its purpose, including the (almost winking) old tomato cans used as rustic lifts for pizza pans. At 24, the Garces Group’s new all-day cafe (just downstairs from its also-new company headquarters), everything has been thought of in advance. Every possibility has been gamed, every solution tested, every problem solved before it occurs. This is the strength of being the 16th restaurant in a string of restaurants– designed for maximum efficiency, even if dressed for casual Friday. Though nothing remarkable is being attempted here (nothing approaching the level of a Volvér or Amada), 24 Wood Fired Grill is what happens when a restaurant group really knows what it’s doing.

RECOMMENDED: Pepperoni pizza (there’s an individual size at lunch) and meatballs for everyone; rabbit agnolotti for those who want to see the kitchen reach a bit.

Do this job long enough, and you develop a sixth sense about restaurants. You can read them like a pamphlet—at a glance, without even thinking. You’re able to smell panic the minute you walk in the door, taste fury in the air (and in the sauce).

Same thing in situations less dire. A restaurant operating at peak efficiency seems to glow. And that’s how it feels when you walk into 24, with its soft rock soundtrack and curved bar, the sanded-down tables with their smooth, rounded edges, the servers’ trench with its little riser (so that whoever’s on expo is eye to eye with the cooks, not reaching up for plates, not discomforted in the slightest) and the all-day vibe of seamless Teflon convenience.

The menu is Italian (unusual for Garces, but understandable, this being Philly and he being a chef who wants to make lots of money), but really, that means American. Really, that means Philadelphian more than anything, its red gravy and hoagies all calculated to within an inch of our Philadelphia-ness but dressed in a mask of wood-fired Italian comfort food.

In the mornings, it is a café. A coffee bar with lattes and pastries for the neighbors and those working in the building at 2401 Walnut. That’s its base state: 24 at rest. And with every following service—as breakfast bleeds into lunch and lunch into happy hour and happy hour into dinner and drinks at the bar—it adds a layer of complexity.

With lunch come the shared plates, cheese, salumi (nothing surprising), antipasti like roasted peppers with goat cheese or burrata with a nasturtium salsa that lays some delicate Latin-inspired fingerprints on the otherwise straitlaced dish. There are fat Italian hoagies that come splayed out like centerfolds and dripping with oil; chicken parm sandwiches that could be used as teaching instruments at Sandwich University; three kinds of salad. (The brussels sprout Caesar is clever, with green apple and bits of pancetta elevating the most, I don’t know, expected of all possible salads.) The meatballs are excellent—soft and tender, rich with pork fat. They come in their own little pot, bathed in simple red gravy, capped with basil leaves and a snowfall of freshly grated parmesan, and served with a side of excellent Italian bread (cut long, soft and chewy, with golden slashes from the grill and the faint flavors of butter and garlic) that arrives in an individual basket made for nothing else. 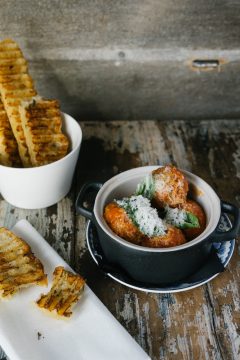 24 also offers eight pizzas—thin, crisp crusts cooked fast in the glowing orange mouth of the kitchen’s stone oven. And while, yes, pizza is a safe, if derivative, bet, it’s still hard to argue against the merits of a decent pizza. The pepperoni is simple, with San Marzano sauce and fresh mozzarella funked up with a little manchego. The cauliflower pie, with scamorza, red onion, pancetta and a shishito escabeche, is daring.

Happy hour only alters the deals on the existing menu—offering snacks, cutting the prices on some pizzas, highlighting cocktails, beer and Italian wines by the glass. And dinner means the sandwiches fall away to make space for a couple extra antipasti plates and pastas, of which the spaghetti cacio e pepe is the most classically beautiful and the rabbit agnolotti with cherries and brown butter is the punk rock upstart with the secret South Philly roots. Both are excellent plates of pasta. Both, if you’re a Garces devotee, seem better than they ought to be, coming from a restaurant group that has historically done far more ceviche than spaghetti. And all of it, again, speaks to a sense of completeness. Of a concept fully considered, executed perfectly and designed to please. And it succeeds largely because so many other restaurants lately seem to have forgotten that even deliberate simplicity demands skill and attention. Fail in that, and you slip into mediocrity. Do it well—get all the details right—and you’re 24.

Because 24 is a restaurant that knows precisely what it is and what it wants to be. It’s your neighborhood restaurant, all day, every day. There for you. Egoless, comfortable and confident. Remember a few weeks back when we talked about Cinder? 24 is the restaurant that Cinder wanted to be. That Cinder could have been if Cinder actually cared more about the food and if the cooks there had any idea what they were doing. It’s Hungry Pigeon without the goat stroganoff. Pub & Kitchen without the soul.

Did I love it? No. But 24 isn’t made for love. It’s made for efficiency, ease and contentment, a machine constructed specifically for the speedy trade of meatballs and pizza for money. I knew that the minute I stepped through the door. But what’s surprising about the place is its gravity. Because everything about it is so easy—because falling into its daily rhythm, approachable menus and warm service requires almost no thought at all—24 makes you want to go back simply because it’s there, waiting and ready to serve.