Boston Scott was on his way to torturing the New York Giants again when things took a 180 on Sunday at MetLife Stadium. 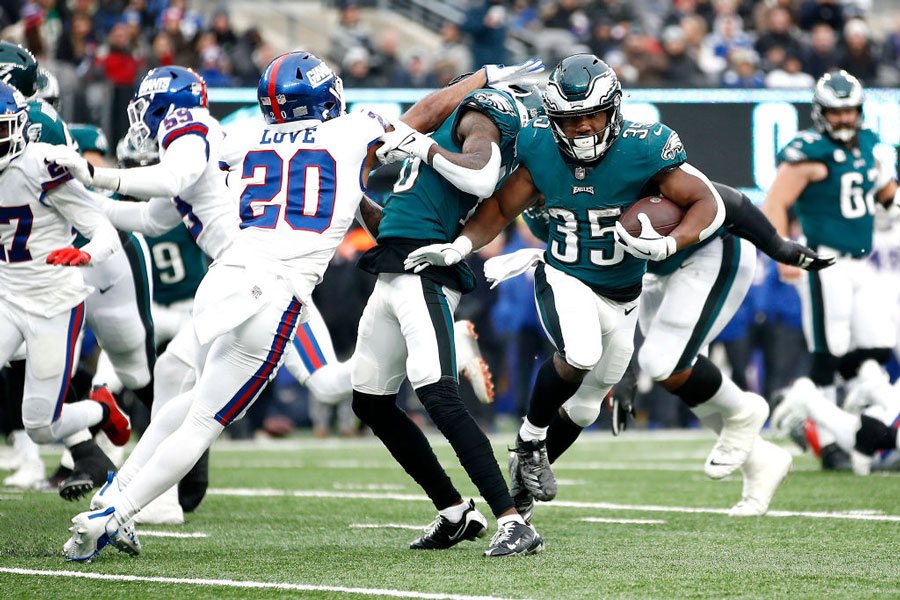 Boston Scott runs with the ball against the New York Giants at MetLife Stadium on November 28, 2021. / Photograph by Sarah Stier / Staff via Getty Images

Boston Scott has had a way of killing the hopes and dreams of the New York Giants faithful, and things seemed to be breaking that way again Sunday at MetLife Stadium. With Jordan Howard out with a knee sprain and Miles Sanders having tweaked his ankle in-game, the narrative was practically writing itself.

It was Scott’s turn atop the 200-yard machine that is the Philadelphia rushing game, and the third-year back had already plunged in from a yard out early in the fourth quarter for his seventh career touchdown against the Giants.

The only thing missing was the denouement, and Scott was en route to providing it, breaking loose for a four-yard gain on the plus side of the field with under two minutes to go and the Eagles down 13-7. The run would have gone for even more had talented Giants defensive lineman Dexter Lawrence not pried the football loose.

The resulting turnover was the most impactful play of Week 12 based on EdjSports’ GWC (Game-Winning Chance) metric or win probability.

In other words, instead of killing the Giants as the 26-year-old has become known for, Scott crippled the Eagles’ chances in a 13-7 setback.

Scott spent an inordinate amount of time on the field after the game ruminating on what went wrong against a team Philadelphia should have beaten.

Receiver Jalen Reagor had an opportunity to make things right in the waning seconds but dropped consecutive passes from Jalen Hurts that would have put the Eagles in a position to win and erase Scott’s miscue.

Like Scott, Reagor proved to be accountable after the contest, and that resonated with teammates.

“At the end of the day,” he added, “I think that’s what it’s all about. It shows a lot about a team what happens in the rough times and what happens in the valleys. If you can take accountability, learn from those mistakes, and correct them, that’s all you can really do.”

Scott, though, did turn emotional when discussing veteran center Jason Kelce, who returned to the game after injuring his knee and fought to the finish.

Scott seemed to realize that in the moment.

“I have a tremendous amount of respect for [Kelce] and what he’s been able to contribute over the years. It’s just incredible to watch, incredible to see,” Scott noted. “Whenever I make dumb mistakes like that it really hurts me because guys like that have been in the league for such a long time and you don’t know how many years they have left. Guys like that make me want to give my all.”