Philadelphia Sprawl Is Worse Than You Think

Center City is admirably dense. But in the metro overall, sprawl continues. Suburban sprawl was born in Levittown, and it continues to grow in the Philadelphia region. | Shutterstock.com

​Last week, Citified settled the debate over gentrification once and for all (just kidding​). So now we’re on to the next most-loaded, maligned buzzword in urban studies: sprawl.

Much like gentrification, one of the problems with “sprawl” is there’s no consensus definition of what it means, despite some past attempts to quantify it. The latest attempt at a “sprawl index” was just published by Thomas Laidley, a sociology doctoral student at NYU. He relies on aerial satellite images and Census data to analyze sprawl in the top 150 metro areas in the nation.

His most surprising conclusion? Los Angeles is the least-sprawling metro, according to Laidey’s metrics. That’s right. The smog capital of the country trumps the New York, San Francisco, Chicago and Philadelphia metros in terms of density. “It’s sheer lack of very low-density development places it atop all U.S. metro areas,” Laidley argues.

It’s not clear where the Philadelphia metro rates in Laidley’s index. It’s not in the top 10 least-sprawling or the top 10 most-sprawling cities, which are the only ones that appear in his study. But sprawl is getting worse in the Delaware Valley, Laidley concludes. Take a look at the map below, where Philly lands in the upper echelon of sprawl gainers. 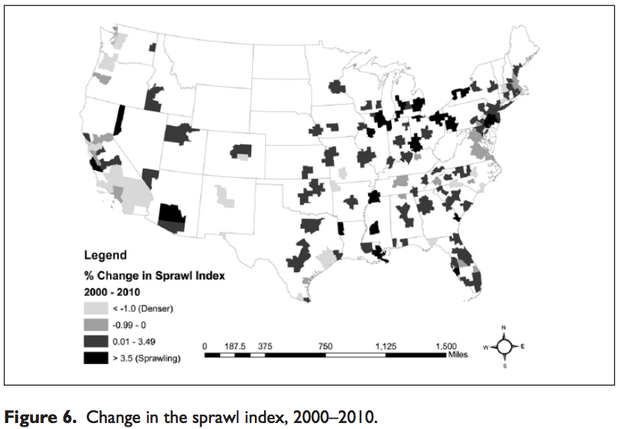 Compare Laidley’s new research with a 2014 analysis by Smart Growth America. Here too, the Philly metro area was deemed significantly lower in density than some of its big city brethren: 33rd among the top 150 metro areas. Philly was ranked well below Los Angeles again, plus the likes of Reading and Bethlehem-Allentown, in fact. That index used four primary indicators of sprawl: density (residential and employment), street networks, strength of downtowns, and neighborhood diversity (of homes, jobs and services) to define the phenomenon.

Looked at a third way, Philly has been steadily increasing in “job sprawl.” In a 2013 study, the Brookings Institution ranked Philly fourth-highest among large metro areas for its share of jobs 10-35 miles outside the central business district (64 percent). Out of the six cities with the largest public-transportation networks, the Philadelphia region was just one of  two (the other being Washington D.C) to increase its share of job sprawl after the Recession. (This helps explain the exquisite agony of Philly’s reverse commute.)

These days, it’s easy to focus on the compact urbanism of Center City. But studies on sprawl show consistently that we remain, in essence, a big metro stretched thin.