The CEO of Philly’s beloved grab-and-go chain on the coolest thing in his office, why that viral Keith Urban story didn’t surprise him, and the wisdom of the Canada goose. 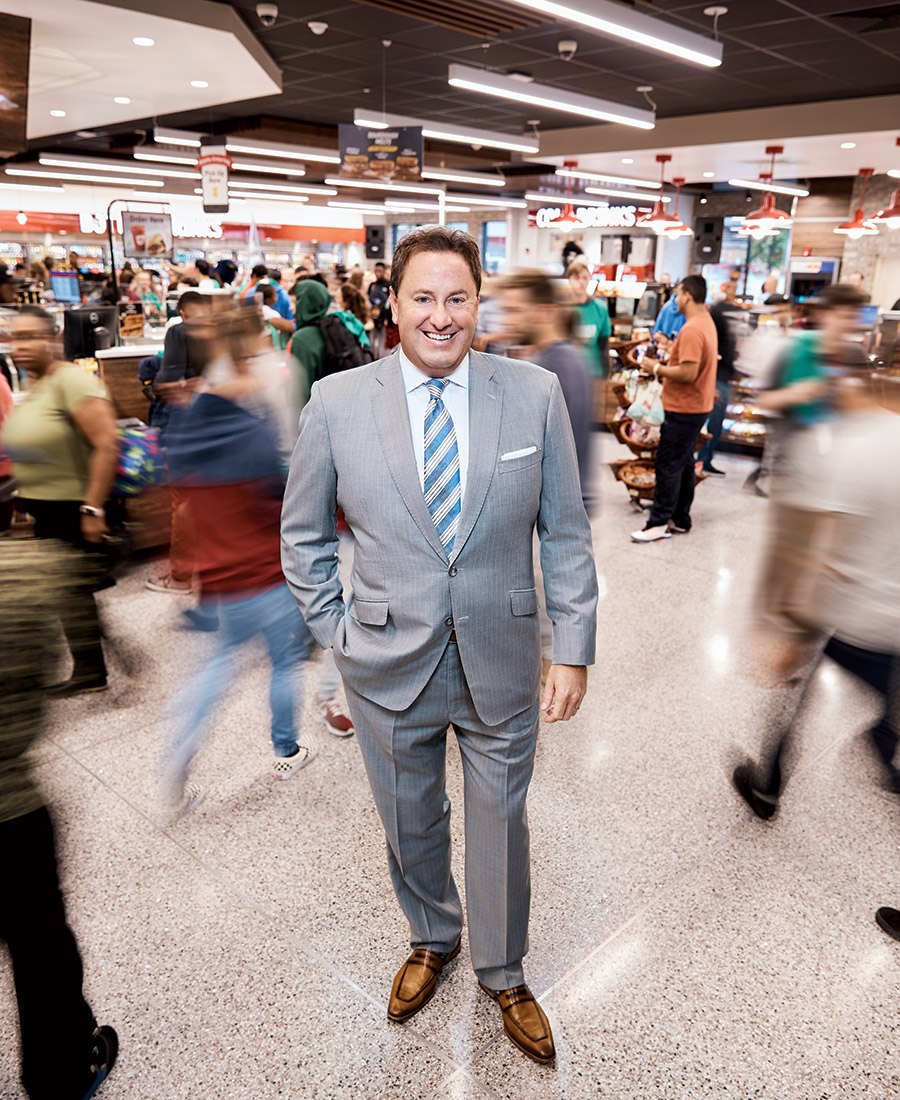 As the CEO of Wawa, Chris Gheysens, 47, oversees more than a chain of retail stores. Wawa is us, and we are Wawa. It’s where we grab our cup of ambition, our daily bread (stuffed with lunch meat), our late-night munchies. Wawa is, simply, Philly’s happy place. Here, Gheysens talks about the hard work that goes into building and nurturing — and exporting — a brand that inspires our deepest devotion.

I grew up in … South Jersey: born and raised in Vineland, summered in Sea Isle City. I also grew up with my father’s car-wash business, and that’s where I learned a lot of my early leadership lessons.

My earliest memory of Wawa … There was one in Vineland at the corner of Sherman Avenue and Main Road. My father and I would visit often, because he would take his quarters from the car wash down the road and play banker with Wawa and exchange quarters for dollars. I was young.

I first worked for Wawa … After I graduated from Villanova, I started at accounting firm Deloitte Touche in Philadelphia. I was given some good advice early on: Make friends with the person who schedules clients. I did, and she said, “We have a great client that people love going out to see.” I said, “Great, who is it?” And she said “Wawa.” Later, when an opening came up for controller, I thought I might be a good fit.

The coolest thing in my office is … a toss-up. I have a Brian Dawkins post-Hall of Fame personalized picture and a Jay Wright autographed Villanova shirt that are both in my office, framed. For my two favorite teams to win championships in one year, it’s like I died and went to fandom heaven. But I also have pictures and a letter from a family that visits Children’s Hospital often from out-of-state. The letter and pictures they sent about Wawa’s ability to give them comfort — to be a place to get food and drink at any time and just bring a little sanity to their experience — that’s frankly more meaningful than the sports memorabilia.

Wawa’s company culture … is our secret sauce. I think of it as a melting pot of our Wood family values, our Quaker roots, our Delco pride and our Philly passion.

Running a family-owned business when you’re not a member of the family … is really great when the family embraces you as much as the Wood family has embraced me and the management team here. And it doesn’t hurt that almost half of the company is owned by the associates through our employee stock-ownership plan.

People are nicer to each other in Wawa stores … because people tend to have a “my Wawa” feeling. A lot of what happens in Wawa happens because the neighborhood or community embraces the store and becomes a part of it. There was a recent viral story about Ruth Reed in Medford who, as she typically does, paid for another customer. And that customer happened to be Keith Urban, who needed a couple of bucks at the time. Those stories happen every single day. Our role is to let it happen, nurture it if we can, but make sure we don’t mess that up. When you talk to our best associates, you get a sense that there’s a higher calling — that they’re not just there ringing a register. They’re there to help serve people in their community, and service, in my opinion, is the most noble calling.

When I see a Canada goose in the wild … When a goose is your corporate logo, you learn a lot about geese. When I’m with my children, I remind them of a lesson: When you see geese flying in V formation, they are 71 percent more efficient than flying alone, because of the updraft that’s caused. And I talk about teamwork, about how the geese in the back of the V honk for encouragement. There are a lot of really cool geese facts that play right into teamwork, and we use those quite religiously around here.  My children are probably sick of it. They’re the most educated 8- and 13-year-olds on geese on the East Coast.

My favorite Wawa jingle of all time … [sings] “We do it just a little bit better … Wawa.” That was in the ’80s, and we still get that played back to us internally and from customers. That’s my favorite by far, and I had nothing to do with it. The customers actually came up with that one.

Opening a new store … is like having a baby. There is a tremendous amount of monitoring and love and care that goes into the build process, a long number of weeks to get a store up and running. And then there’s a celebration when the store opens, and a great amount of nurturing that happens after that. You have people growing inside of the store, new leaders, new parts of the family. Then at some point, we let them off on their own. You can never be too big that you start getting enamored with, well, I’m gonna open 50, or 60, or 70 stores a year. Each one is its own special little creation, and you have to take care of that community, that store, those associates, those customers, as if they’re the only ones that exist.

The most challenging part of Wawa’s expansion into new regions is … transferring our culture. Accelerated growth is always an enemy of culture. It’s the number one reason that we tend to grow a little more slowly than we could.

Wawa’s next Center City flagship store … will open in mid-December at 6th and Chestnut, and it will showcase our love and pride in Philadelphia. It’s gonna have some of the coolest, newest products that no other Wawa has ever had, so think maybe … fresh-baked baguettes … new drinks on tap. It will officially be the largest Wawa on the planet. This really is a lot of people bringing together our entire best, and we are throwing everything at the wall, because this is Philadelphia.

When the Eagles won the Super Bowl … I got emotional, thinking of going to the games at the 700 level of Vet Stadium with my father and brothers. And then, on TV, seeing the seas of people celebrate in front of the Wawa on Broad and Walnut was a little scary … and amazing. It was such a proud moment.  I had people from across the country sending me pictures on every news station with the Broad and Walnut Wawa in the background.

Having our hoagies appear with Tina Fey on Saturday Night Live … was nerve-racking. We knew they were gonna use Wawa hoagies somehow on an SNL skit that night. In the end, the skit was hilarious, and Tina Fey was perfect. She’s a great ambassador for the city, and we were just thrilled to be included. Probably half the country had no idea what she was talking about when she mentioned Wawa. That’s okay. We’ll take it.

In this era of perpetual disruption, the biggest threat to convenience stores is … not recognizing that the core categories that built the industry are in long-term decline. The whole notion of convenience is changing. When I can pick up my phone and in three taps have almost anything delivered to my door in 30 minutes, 60 minutes at most, that’s convenience.

The biggest difference between the industry now and when I started is … 20 years ago, convenience was really about drinks, gasoline, chips and cigarettes. For many of the good providers across the country, it’s now about being a place where I can stop and get fresh, quality food.

The biggest threat to convenience stores is … not recognizing that the whole notion of convenience is changing. When I can pick up my phone and in three taps have almost anything delivered to my door in 30 minutes, that’s convenience.

To people who say Wawa hoagies aren’t as good as they used to be … I lose a lot of sleep when we hear that — hoagies are our signature product; that’s what we grew up on. But at the end of the day, we are always striving to listen to customers. We have invested a ton of intellectual resources into making our hoagies, and we think we have a pretty darn good one. And yet, we want everyone to think that. People’s tastes continue to grow and evolve, so our hoagies, our ingredients, our menus, have to grow and evolve.

Published as “I Love My Job: Chris Gheysens On Culture” in the November 2018 issue of Philadelphia magazine.