The leader lets us in on his vision for local infrastructure and his journey leading one of the city's most renowned family businesses. 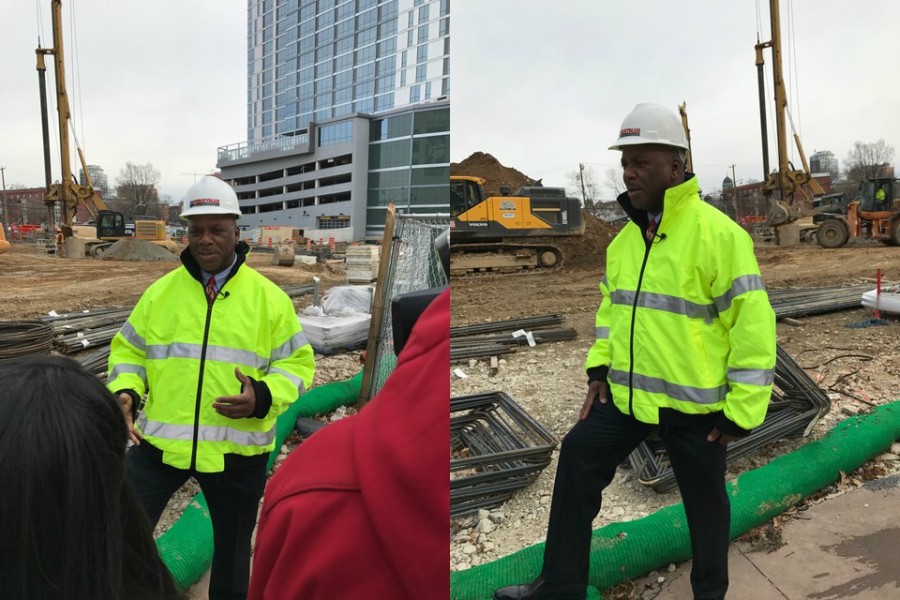 Angelo Perryman is one of Philadelphia’s most decorated businesspeople. Just this week the Perryman Building & Construction Services president and CEO received PHLCVB’s coveted Minority Business Award, which acknowledges “a thriving minority business that enhances Philadelphia’s hospitality and tourism community.” Last year, Ernst & Young honored the leader with and Entrepreneur of the Year Award. And the rolling honors make a lot of sense. Perryman Construction is behind some of Philadelphia’s most notable infrastructure projects like CHOP’s South Philly Primary Care Center, the Democratic National Convention Center stage, the Kimmel Center, and Philadelphia Eagles Stadium. Some recent projects include LOVE Park and The Gallery. In this interview, Perryman talks about the significance of running a family business and black-owned business in Philadelphia. He also lets us in on why he gets just four hours of sleep each night.

I grew up… in a small town called Evergreen, Alabama. That’s where our family business was started.

I came to Philly… in December of 1989. I was in Detroit at the time, and Philadelphia was about to do a major transformation from manufacturing to hospitality. I came to Philadelphia as a part of the construction team for the Reading Terminal Trainshed.

A passion of mine is… seeing other people have their chance. I get a lot of fulfillment out of seeing people achieve things, just because they got a chance to try.

Running a family business… you know that you’re carrying a legacy that was created either before you or one that you believe will exist beyond you.

Having the business reach three family generations is… really exciting because it’s unusual to find two people in the same generation that like the same industry. But for us being three generations, we found a way to understand it, to find ourselves in it, and to see the value of it.

A big project we’re currently working on is… at The Gallery. We are retrofitting what used to be the JCPenney’s at 11th and Filbert. We are converting that into a big new eight screen AMC movie theatre.

The vision for LOVE Park is… twofold because the park itself has two floors. There is a garage underneath the park which had become underutilized because of ill repair. The top is the park that was thought to be less than accessible to the public. The desire was to improve the greenery, take away some of the obstructions to allow more people to use the park, and to also give visitors coffee and things of that sort that weren’t there before.

There’s more to be done to the space. The visitors center will be renovated further. It’s operational but we will do a facelift on it. There will be more greenery and we will also finish the fencing.

The most exciting project we’ve completed is… the CHOP Family Care and Literacy Center. It is a nationally recognized development and public private partnership with the city of Philadelphia. It basically gave South Philadelphia access to the most advanced city health center, a new 21st century library, and CHOP’s pediatric care all in one building. It also had a park in the back, which is the first time you have all four utilizations in one location. We even had a fountain in the back of the project, so the kids all have a great time. 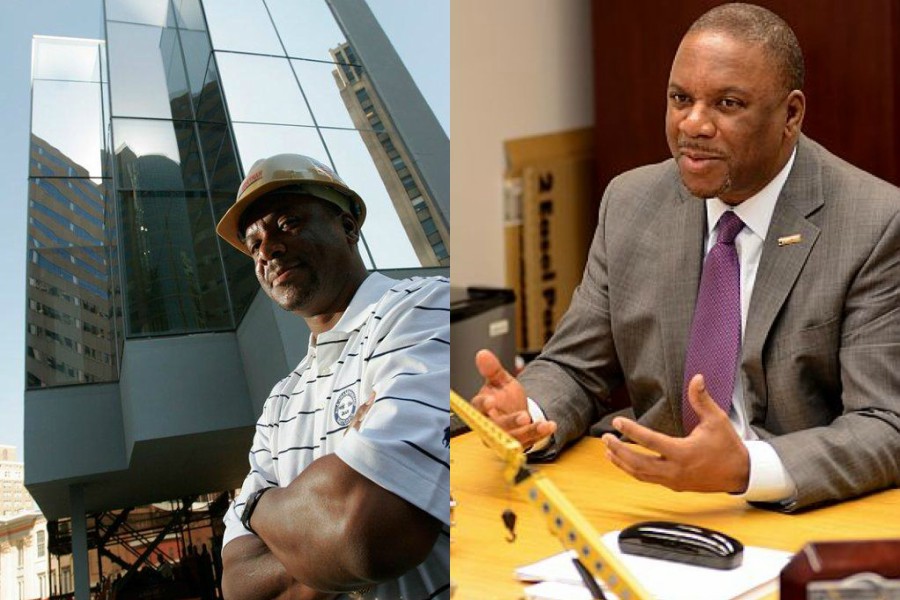 My favorite building in Philly is… the Reading Terminal train shed because of the construction. There are only two buildings of that type in the world. One in Russia, which was thought to be demolished, and one in Philadelphia. This is a one of a kind building constructed for train access based on 19th century engineering. From an engineering standpoint, the building structure was almost perfectly aligned. Even over 100 years later, that building is better than any new building that’s out here now.

Philly’s best attraction is… LOVE Park because of ease of accessibility. You can go from the park to almost anywhere. The readapting of the space at Dilworth Plaza and LOVE Park are huge for Center City.

A habit I’m trying to break is… working hard. I guess that’s not the best answer but I do work a lot. I get about four hours of sleep a night. There are few days when I’m not working. The key part for me is that I want things to be timely. So even though I’m busier, that doesn’t change the fact that I need to communicate back to folks in a timely fashion.

If Amazon HQ2 comes to Philly I will… start marketing for new work harder. [Laughs]

One skill I’m still honing is… my golf game.

If I wasn’t in construction I would be… a clothing tailor. It actually almost happened. Construction is very tough, but I like how you take pieces of raw material and turn it into something. Tailoring, just like construction, means that you have a client who is happy in the end. I like taking parts and pieces, putting them together, and then getting the final results. I’m like a little kid on Christmas Day when looking for the final results.

When I want to relax I… walk out in the woods. There’s nothing that makes your problems disappear than seeing how complex it is for other things to survive. You just look at nature and see how many things are going on, and wonder how that happens. They can’t talk so they can’t complain, but they’re still living creatures. 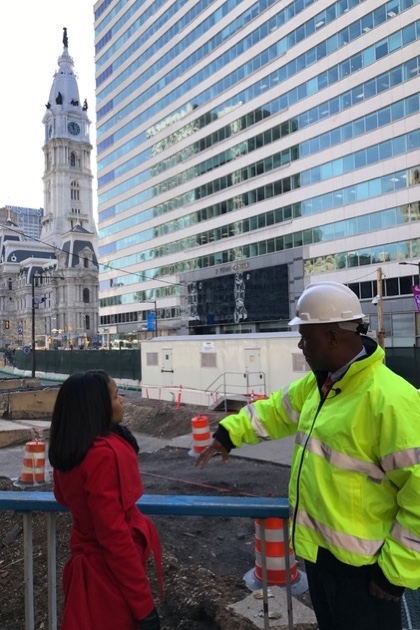 Perryman at the under construction LOVE Park. Courtesy photo.

My morning routine involves usually… happens between 4 and 6:30 a.m. There’s usually a quick prayer and then we’re at it. I start looking at my emails to see if anything changed while I was asleep. Then I take on the normal schedule. And I’m pretty strong on the scheduling side of my day. My schedule is rock hard. My team knows exactly where I am most times.

I drive a… Toyota 4Runner.

Something outsiders don’t understand about Philly is… the city’s people-to-people network. It is much different than any other place I’ve ever lived in. And I’ve lived in the Southeast, Midwest, West, Northwest and even in Alaska.

When it comes to how technology in our industry… I’d say we’ve always been on cutting edge of it especially in the computer world. We were early to using the Apple Macintosh and Compaq. They were not as efficient but it was an easier way. When you’re dealing with construction, there is mathematics that you need to get absolutely correct. So the timesaver and efficiency is that you don’t have to have a person second check numbers.

The toughest thing about working in my industry is… you’re constantly looking for new projects and customers. So that means that you have to market to each potential client individually.

The biggest lesson I’ve learned from running this business is… be who you are and always trust your gut and your principles.

To achieve a diverse workplace, companies should… allow character to be the primary confirmation of a selection. Because most people will try to put you in through the clubs. Depending on who is doing the selection, some clubs you just can’t get to.

When my dad ran the business he… hired people that had no construction understanding at all and patiently worked with them.

I’m proud of the business because… we remain true to our original founding, where our motto has been quality people doing quality work always counts. For us, it’s about the people and being part of something bigger than yourself.

Black-owned business are important because… they understand certain phases or markets, and they have a different, usually progressive insight in how to respond to the customer’s needs.

I wish I had more time to… spend time with family. When you’re growing personally and in your business, you have a lot of demands.

In ten years I see myself… taking my book on a book tour and sharing the things that I’ve learned the hard way.