The NYU professor predicted Amazon would buy Whole Foods. Now he has some strong opinions about where the company's second headquarters will land. 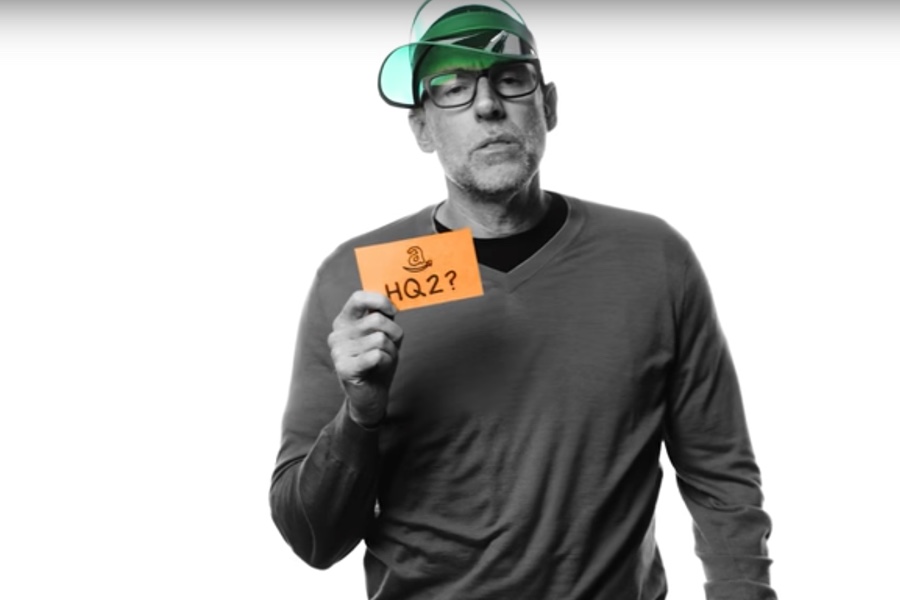 NYU marketing professor Scott Galloway — whose new book The Four: The Hidden DNA of Amazon, Apple, Facebook, and Google is at the top of many reading lists — recently released a viral video with his predictions for where Amazon will land. Last year, Galloway predicted Amazon would buy Whole Foods, and now he’s keeping it real about the HQ2 shortlist. In the video, he draws city names from a box and discusses their potential to attract Jeff Bezos in what he describes as a “shit show circus […] where mayors and municipalities drop their drawers trying to prostrate themselves to the Seattle giant.” To Nashville he says, “A super cool place. Great for young people. Absolutely no chance.” To Boston he says, “C’mon we’re sick of Boston. All the universities, the sailing — whatever. I just don’t see Jeff Bezos deciding to be in Boston.” When Galloway draws Philadelphia’s card, though, he says nothing about the city’s assets and just lumps it with the New York metro area, a region he says is a top contender behind D.C. What’s up with that, Galloway? I reached out to the brand expert to get his specific thoughts on Philadelphia and its chance to land HQ2. Here’s our conversation:

BizPhilly: In the video you don’t specifically address Philadelphia’s assets. Do you think the City of Brotherly Love has a shot at landing Amazon’s second headquarters?

Galloway: Philadelphia is a great city — great schools, food and more. And it has a shot as it is a (long) drive from NYC where I believe Jeff would live.

D.C. is no. 1 seed as it would be prophylactic for regulation. Jeff Bezos would be the “local” boy and likely delay government regulation by several years as … it’s coming. NYC is no. 2 as Jeff has a house here. There are three world-class universities, international airports and it’s where kids want to live.

BizPhilly: You’ve consistently said that the HQ2 competition isn’t about cost of living. But if it were a factor, Philly has both New York and D.C. beat. Does that not count for anything?

Galloway: You’re right. Philly is significantly more affordable to live in than New York or D.C. But cost of living is only a consideration once you begin collecting kids and dogs. Young people, who Amazon will be focused on attracting and retaining, will pile five people into a two-bedroom apartment in Williamsburg or Adam’s Morgan. And young people, with options, all want to live in San Francisco or NYC, and everywhere else is a distant no. 3.

BizPhilly: From your perspective, any thoughts on why Philadelphia tends to get lumped in with other areas (like the NY metro area) or is sometimes ignored in the national discussion on HQ2, even though the city meets many of Amazon’s requirements?

Galloway: New York and D.C. are both international cities. They are recognized on a global scale for their businesses and politicians. Cities like Philly, Pittsburg, and Denver aren’t thought about on the same scale. We love Nashville, but we don’t think about them often.

BizPhilly: So should a city like Philadelphia even be gunning for a big tech company like Amazon and its leader — the world’s richest man? In other words, would Amazon make sense for Philadelphia?

Galloway: It’s not a question about whether or not Amazon would make sense for Philadelphia. Introducing new business in new areas is always something that city and state governments should be discussing and pushing for. However, the race for HQ2 has turned into a frenzy pitch among municipalities that highlights the perversion of our nation at the hands of big tech. Amazon has created an offline algorithm that pits cities against one another and occupies the headlines of almost every major newspaper and news program while soaking up taxpayer dollars.

Let’s be clear — this is a zero-sum game, and Amazon’s biggest PR initiative yet. The “winner” here may wake up with a hangover that includes budget cuts for schools and police as tax coffers erode based on the deal cut for Amazon.