With the Macy's light show set to begin this Friday, the man who has been playing the organ there for 30 years tells us about his very unique occupation. 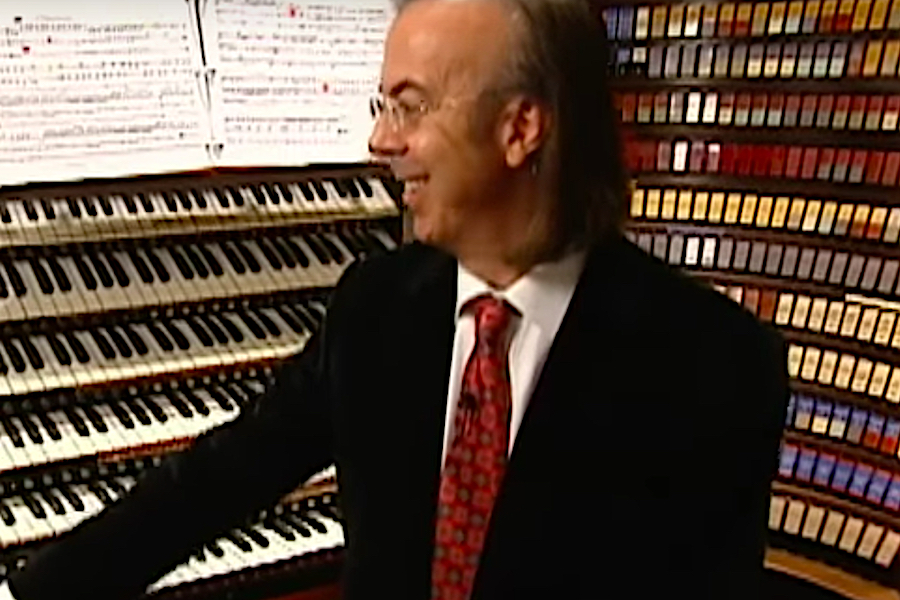 Peter Conte at the Wanamaker Organ. (Screenshot from CBS News video, which appears below.)

On Friday, the Macy’s light show returns to the department store’s four-story-high Grand Court atrium, with each show (there are six daily through the end of the year) being followed by a live performance on the majestic Wanamaker Organ. Here, an interview with principal organist Peter Conte, who has been playing the iconic instrument there for 30 years.

My full name is… Peter Richard Conte. It is commonly misspelled with an “i”.

I grew up in… Garden City, Long Island, New York.

I came to Philly… in 1984 after graduating from Indiana University. I came here for a job at All Saints’ Church in Wynnewood.

These days I live in… Center City, which is close to all of my jobs.

My job is… playing the Wanamaker Grand Court organ. That is my dearest job. I’ve been there since 1989 as the titular organist and two years as assistant before that. So I’ve been playing the organ there for 30 years, which I never really thought about until now. I’ve been the organist for the wonderful church St. Clement’s since 1991, and we have a 16 voice all professional choir there, which is a pretty rare thing these days. And I’m the principal organist at Longwood Gardens, where I do live demonstrations for guests at least once a month and a couple of concerts a year. And I play for the Philly Pops at Christmastime for their grand Christmas show, a ten-run show at the Kimmel. And I play with the Philadelphia Orchestra at times. I have a lot of irons in the fire.

When I was a kid, I wanted to grow up to be… exactly what I am today. When I was six, my family took a trip — in hindsight, perhaps not the best idea. Four kids in a station wagon, driving across the country. But that’s what we did, and all I remember from that trip was going into the Mormon Tabernacle and saying, “Dad, I want to play that.” About ten years ago, I did.

My dad wanted me to grow up to be… a dentist. That’s what he did.

My best subject in high school was… math. My worst was gymnastics. And history.

If I had to pick one song to perform again and again… it would probably be the suite from Der Rosenkavalier by Richard Strauss.

The Wanamaker Organ is… arguably the most amazing musical instrument in the world. And the largest fully functioning musical instrument in the world. No argument there. It is an international treasure and one of the last remaining American symphonic instruments that were produced in this country’s prime period of organ building in the 1920s and the early 1930s, a time when the organs emulated symphonic sounds literally. This organ represents three symphonic orchestras. Most of these organs were sadly altered or altogether destroyed in the 50s and 60s thanks to fads.

The origin story of the Wanamaker Organ is… that it was built in Los Angeles for the St. Louis World’s Fair in 1904. It was only a third of its current size at that time, about 10,000 pipes. When the fair closed, John Wanamaker bought it and hauled it to Philly in thirteen freight cars. And then once he got it to the store, he tripled its size because it was deemed not large enough for the grandeur of the space.

Other notable organs in the area include… the organ at Longwood Gardens, the organ at Irvine Auditorium on Penn’s campus, and the organ at Girard College, where they are now actively on a restoration campaign. This area is actually quite wealthy with organs from that period relative to what’s still in existence in the rest of the country.

The best part of my job is… getting to make music in a place where folks don’t necessarily expect to hear live music. They come in to buy a pair of shoes or a handbag and then they are transformed and transfixed by this incredible sound. It literally engulfs the listener. It’s not like muzak. Its a very three-dimensional thing. The organ actually moves a lot of air. You feel its presence. You’re not just hearing a speaker in the ceiling. It is literally moving you. People come up to you in tears. I love getting to make their day special.

The most difficult part of my job is… performing in an environment that’s so unique. This is a department store, which involves a whole set of criteria most performers don’t deal with. The vacuuming, the endless extraneous noises you don’t encounter in a church or concert hall. It takes a lot of getting used to.

If you want me to play your wedding… I will probably send my assistant. When I was working out at Valley Forge Chapel for eight years, I did three to four weddings a weekend. I played more weddings than I ever thought I would play. I’m also just too busy to deal with it, but I will do them for very close friends.

If you want to see me play the Wanamaker Organ… there are twelve concerts each week all year long. Folks don’t realize that. It’s not just at Christmastime. Every day, there are two 45-minute concerts, and I do the majority of those. Christmastime is actually the least advantageous time to hear the organ, because the pipes are actually behind the Christmas show. The Macy’s light show inhibits the organ’s egress into the room, though it still sounds beautiful.

One organ I’d love to play but never have is… the symphonic organ at Sydney Town Hall in Australia or Melbourne Town Hall. Australia has these big, big instruments. And the one at Royal Albert Hall in London. These are incredible iconic instruments that I have not played.

If you’re buying me a Christmas present, please get me… anything with penguins. I collect penguins. Well, not live ones. But all manner of inanimate penguins, I collect. When I was a kid, I was one of four siblings and all of us had animal pseudonyms. When they saw me get dressed in my first tuxedo, I was named The Penguin, and it stuck. Penguins are amazing animals. They are survivors.