Broadband advocates say it’s time to check in on whether the company is following through on its 2015 franchise agreement with Philadelphia. 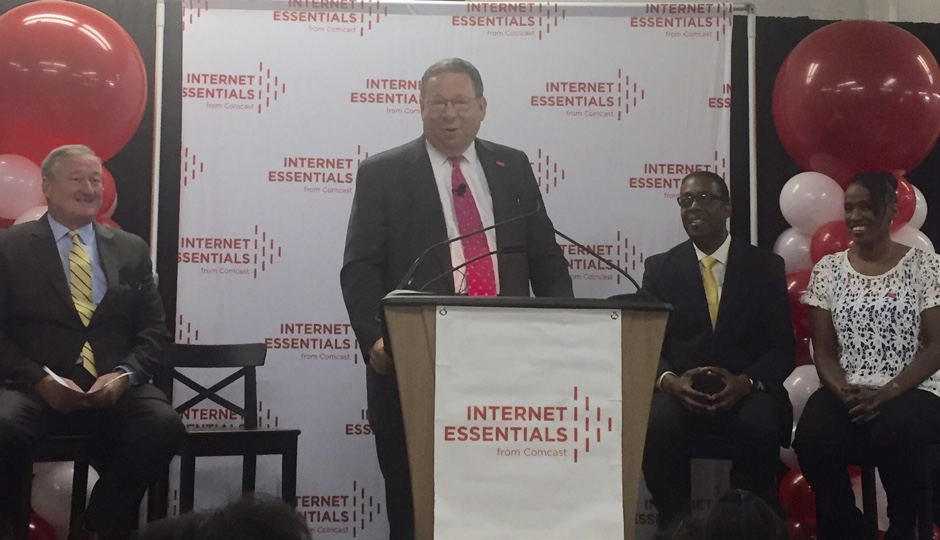 Last week, Comcast announced that 9,700 more families in Philadelphia have enrolled in Internet Essentials — the company’s low-cost service for low-income residents — since the start of last school year, bringing the total number of families to 31,000. But local broadband advocates say that Comcast isn’t forking over information necessary to prove that the company is keeping the Internet Essentials promises it made in a 2015 cable franchise agreement with the city government.

“With the franchise agreement, we pushed Comcast to do more to help low-income families and seniors, to bridge the digital divide with Internet Essentials as a vehicle,” said Councilman Bobby Henon, who led the franchise agreement negotiations with Comcast as chair of City Council’s public property committee. “In side letters, we got them to say they would broaden eligibility so that more people can get online, but we haven’t seen any numbers since then that speak to the status or effectiveness of these specific expansions.”

When Comcast first rolled out Internet Essentials in Philadelphia, applicants, in order to be considered eligible, had to have at least one child who qualified for free school lunch under the National School Lunch Program. But in its 2015 negotiations with the city, Comcast agreed to conduct a pilot program to extend Internet Essentials to low-income seniors who are not connected to the Internet.

Comcast also promised to partner with a local non-profit organization to provide low-income Philadelphians who don’t have school-aged children the option to participate in Internet Essentials.

Comcast has since launched the program for seniors, and it has also partnered with the United Way of Greater Philadelphia & Southern N.J. to expand access. Last year, the company announced that households in Comcast’s service area that receive U.S. Department of Housing and Urban Development assistance or live in public housing that is state- or locally funded are eligible to participate as well.

Comcast has publicized the rollout of these programs, but told Philadelphia magazine that it will not release the amount of individuals subscribed under each subset: So, for instance, it won’t say how many elderly or childless people have enrolled since those expansions.

“They’re saying the information in the side letters is confidential and proprietary, so they’re not releasing anything,” said Henon. “City Council wants to hold Comcast accountable for the programs that we collectively negotiated to see if they’re working.”

Specifically, Henon says he’d like to see where specific initiatives started out and at what rate they collected subscribers over time. “I want to see the increase and how they are promoting the program. If these individuals aren’t online, how are they connecting to communities to promote Internet Essentials?”

Media Mobilizing Project policy director Hannah Sassaman says Comcast hasn’t released any information about the biggest sticking point in a lot of the negotiations, either.

With the franchise deal, Comcast agreed to end a controversial eligibility requirement, which stated that applicants cannot qualify if they were a Comcast internet subscriber within the last 90 days. This means Comcast internet customers who were eligible for Internet Essentials were required to turn off service for 90 days before they could access the low-cost program. “How many of the ‘new adopters’ to Internet Essentials in these released numbers had to turn off service for 90 days to access this deeply needed discount?” If these customers are included in their numbers, the curve of adoption is flawed, Sassaman explained.

Since the franchise agreement, Comcast maintains that subscribers in Philadelphia have not had to lose service for 90 days since the agreement established a five-year amnesty program in which the company agreed to waive the requirement, with the City of Philadelphia subsidizing each such Internet Essentials customer at a cost of $20 per month.

Comcast spokeswoman Jennifer Bilotta said that “since Internet Essentials’ inception, Comcast has made dozens of program expansions, nowhere more so than in Philadelphia.” According to Bilotta, some developments include increased speeds over the six years. This year, Comcast announced that it’d increased downloads speeds from 10Mbps to 15 Mbps, and customers have 2 Mbps of upload speeds.

Over the years, the company has also added free in-home WiFi, extended access to Xfinity WiFi hotspots, and streamlined the enrollment process so that families whose children attend schools where 40 percent or more of the students participate in the National School Lunch program, as well as public housing residents, can use a streamlined application for the program without having to submit additional verification documentation. Comcast also boasts that materials for Internet Essentials are available in 14 different languages, and English and Spanish-speaking subscribers can call in-language call centers to apply.

“It’s an important program. We need it to break the deep digital divide that exists in the poorest big city in America. Comcast should be praised for doing it, but we need to look at it in context,” Sassaman said. According to the broadband advocate, it’s not irrelevant that Comcast allegedly tries to block competitors from entering markets like Philadelphia. The competition could potentially bring down prices and bring up speed, giving consumers, particularly low-income consumers, more options. And the company’s effort to roll back net neutrality protections as they stand isn’t irrelevant to digital divide discussion either.

“Comcast has fought net neutrality as protected by the Obama-era FCC—a series of rules that prevent companies like Comcast from slowing our internet based on ability to pay, blocking or throttling access to websites, and important transparency rules around Comcast’s pricing and speeds.” Comcast says it won’t block or throttle content should Congress and the FCC rewrite net neutrality rules.

And it’s not irrelevant that in the same week Comcast announced its new enrollees for Internet Essentials, the company also said that it launched gigabit internet service. “While Comcast wants praise for raising low-income community members’ speeds 5 mbps/second, as they invest in gigabit internet for rich customers and neighborhoods, customers and elected officials should remember that we give them the right to sell services here, and we must hold them accountable to provide fast, reliable, affordable internet for everyone,” said Sassaman.

Comcast senior vice president David L. Cohen, who champions the low-cost program, said in a statement released last week that while the milestone is wonderful to celebrate, “it also inspires all of us to keep going to connect even more families to all that the internet has to offer.” For Philly in particular, the executive admitted that the program got off to a very slow start in 2011, a delay that he attributes to internal complications at the school district at the time. Philadelphia now has the third-highest Internet Essentials adoption rate behind Chicago and Houston.

To open discussions with Comcast, Councilman Henon recently introduced a resolution for a public hearing on the Internet Essentials’ side letters and the cable franchise agreement overall. The resolution passed unanimously, and Henon says the public hearing will take place this fall.

“We crafted the best national franchise agreement right here in Comcast’s hometown,” Henon said. “Now I’m calling for hearings because we’re all about outcomes. We’ve given them a chance to produce the information but they have not.”

On the amount of families Comcast says are signed up in Philadelphia, Henon says the program must do more.

“Thirty-one thousand families is certainly not enough. We’re a city of 1.5 million people and we are about 26 to 27 percent in poverty, with 12 percent in deep poverty. Those numbers just don’t add up,” he said.

“I hope 31,000 isn’t the outcome they are going to provide to us when we have this public hearing. I would be disappointed.”