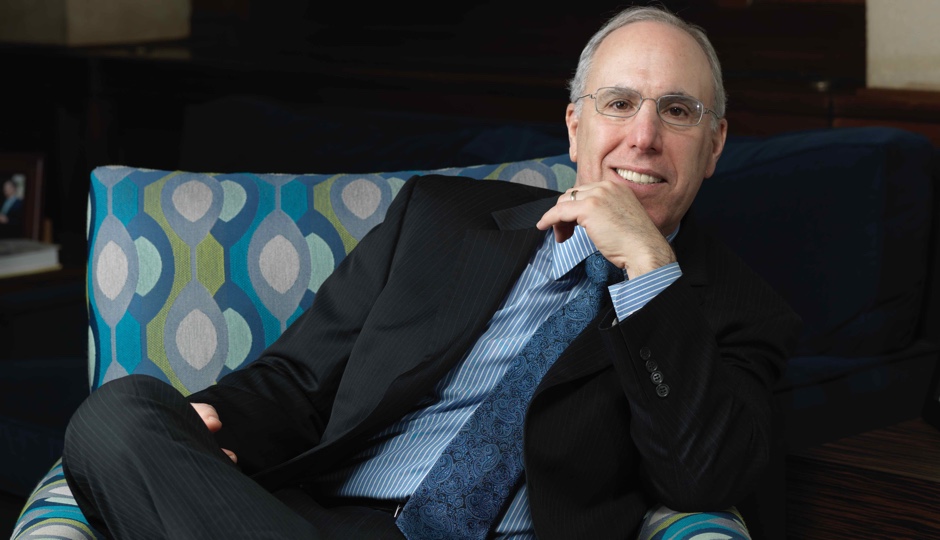 Before the former Philadelphia University president got into higher ed, he was an entrepreneur in the trenches. At 24, Stephen Spinelli, Jr. was a member of the founding team of Jiffy Lube and became the company’s largest franchisee in just ten years. Now Spinelli’s the chancellor of newly merged Thomas Jefferson University, following a decade leading PhilaU. Spinelli’s got tons to say about the future of Philadelphia’s now fifth largest university and why the Philadelphia University name isn’t really going anywhere. He gives us his best advice for today’s budding entrepreneurs and tells us what he plans to cross off his bucket list soon.

I grew up in … the Italian-American section of Springfield, MA called “the South End.” Most heads of each household were either immigrants or first-generation Italian American. Most spoke Italian as their first language. My parents insisted on English because they were not proud of their uneducated Italian dialect and were afraid it would hold their children back in school.

Now I live … on campus in East Falls. I love being a part of the university community where we work, study, eat and play together. In many ways the college campus is one of the last vestiges of neighborhood in America.

A fond memory from my childhood is … 1. Holiday dinners—all day feasts! 2. Sports!

Something special about my schooling was … the series of wonderful teachers and coaches who mentored me with skill, passion, diligence, toughness and friendship.

When I was younger I wanted to be … Mickey Mantle and rich. Which at the time I defined as not being poor! 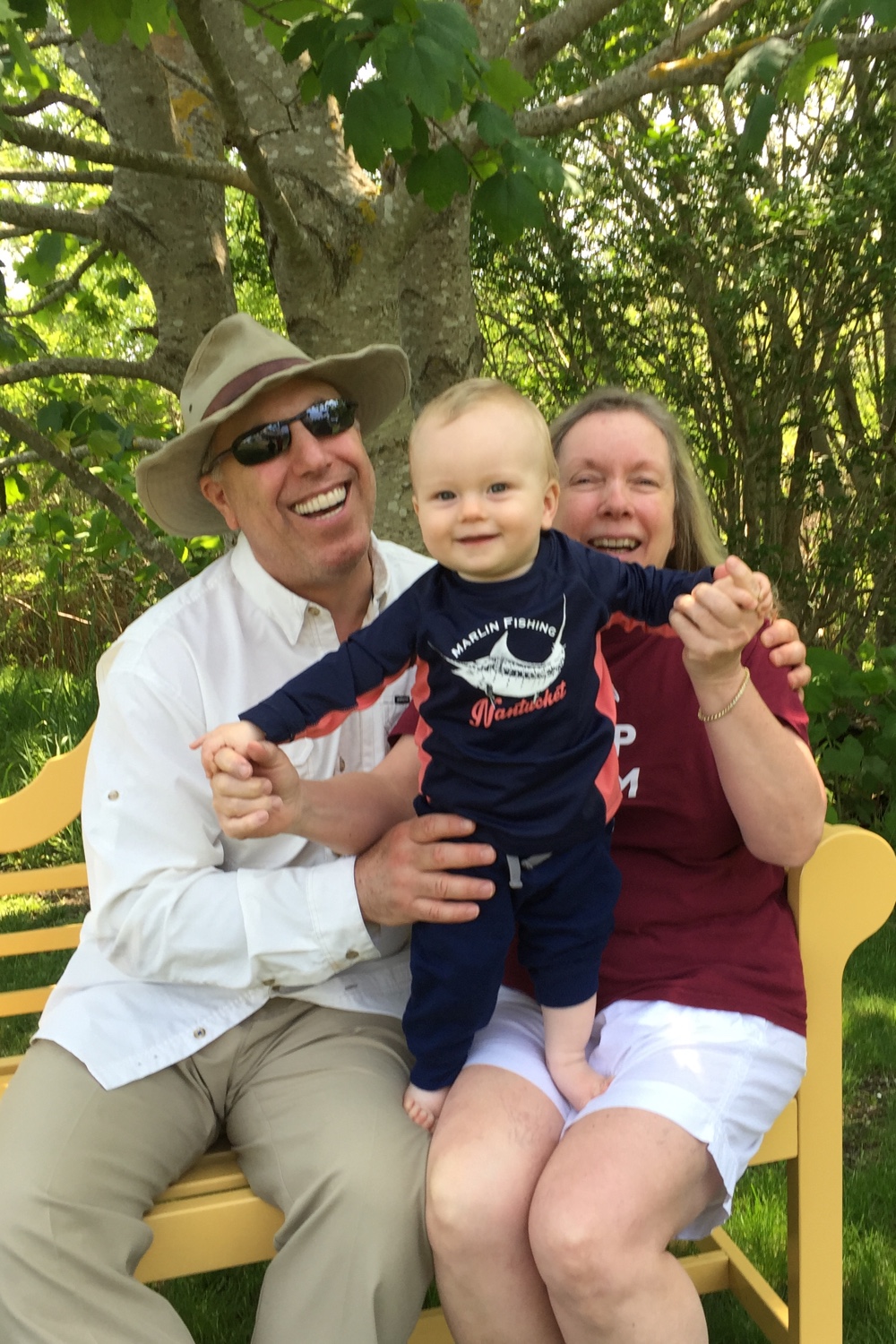 Stephen Spinelli and his wife Carol Spinelli, with their grandson Alexander. Courtesy photo.

An educator that impacted me … so many! Mr. Moriarty in 5th grade, Ms. Hryniewicz in Junior High, Coach Rex Walker in High School, Coach Jim Hindman in College, Professors Bill Bygrave and Jeff Timmons for my masters degree and Professor Sue Birley for my doctorate.

I chose to study econ in my higher ed. years because … it was the discipline that best melded thoughtfulness and action in an intuitive and rigorous manner.

Being a co-founder of the company meant I had to … get mentally tough very quickly. My college football coach was the lead entrepreneur at Jiffy Lube. He brought a bunch of kids into the deal because he believed in us. This experience and the coach as teacher taught me that team and collaboration were hard and necessary to create long-term value for the stakeholders.

Starting a business in the 70s was like … living the dream. In the 70’s there were fewer young people starting businesses because technology was less evident in the business models and venture money bet on more experienced players. Jim Hindman believed in us and created the opportunity for us to prove we were worthy. He was tough.

Some advice for today’s young entrepreneurs … understand the nature of market demand, build a team, collaborate and create value for stakeholders. Your wealth will follow.

The most important lesson I’ve learned in my ten years as president of PhilaU is … change and disruption are bedfellows. Change is continually happening in our lives. The predictable change is more easily accepted. The unpredicted change can jolt us. Either way the tide of change occurs naturally and we can put our oar in the water or let the tide take us at its will. I choose to be in the game.

A hard lesson I’ve learned as president … the emotional connection to the university is a double-edged sword. Passion can build support for the university but it can also create a cultural fever that can disturb good decision making.

The value of a college degree is … proven, under attack and rapidly changing. The higher education model is embedded with high costs and opaque career pathways. The delivery systems are evolving rapidly through technology and creative pedagogy. 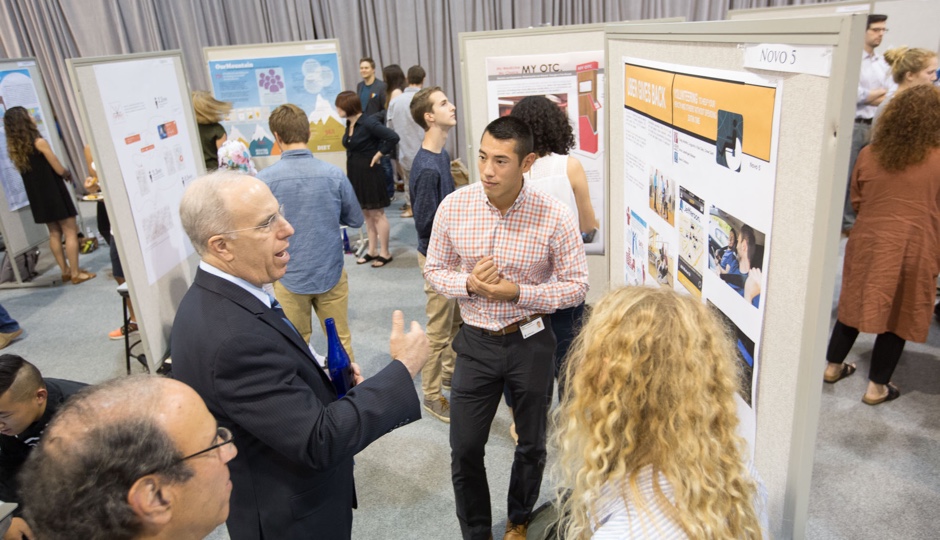 College may not be worth it if … higher education providers are unwilling to dynamically evolve—accelerating credentialing; doing to learn rather than learning to do; collaborating among disciplines to build opportunity seekers and problem solvers; being more explicit about the value proposition.

A book on my reading list I’m eager to get to is … I’m in the process of reading the biographies of all US Presidents in random order. I have finished 14. Andrew Jackson is next up.

Something fun I’ve done this summer is … attended the Nantucket Wine Festival and so should everyone else!

A leader I admire is … Stephen Hawking. He has channeled the most dire of personal circumstances through an intellectual prism that has amplified his contributions to society.

We formalized Nexus Learning at PhilaU because … it embodies historical capabilities of Philadelphia University’s transdisciplinary/market-facing instincts and the forward-looking demands of the modern economy. It clarifies the value proposition for students by creating disciplinary expertise and an ability in those experts to collaborate and solve problems, adding immediate value to the organizations they join.

Something on my bucket list that I’d like to cross off in the next two (or three) years is … ride my bike from London to Paris.

Philly-area corporations should connect with local universities because … they can and should influence the nature of the curriculum and join in the education of the community. They will contribute mightily and benefit even more. 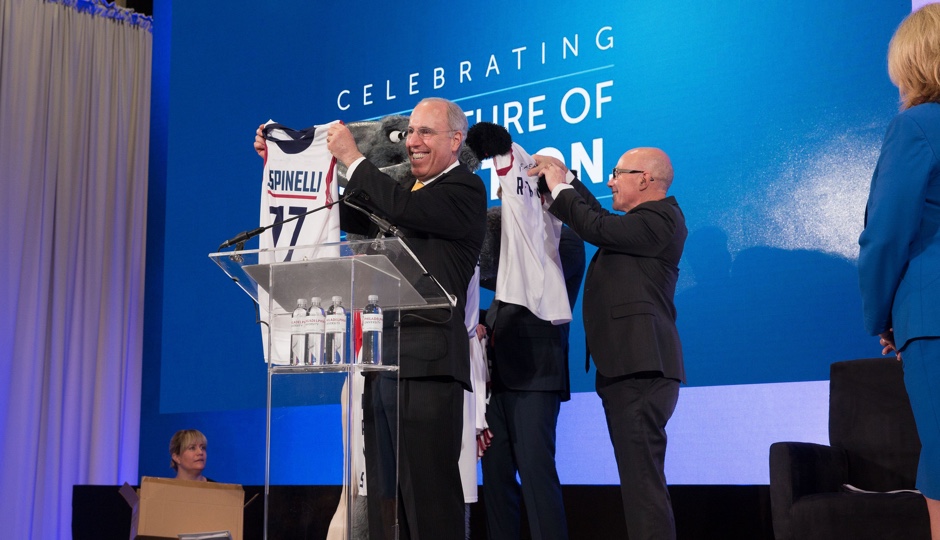 On stage at the unveiling of Thomas Jefferson’s new identity. Courtesy photo.

The possibility of merging with TJU first crossed my mind when … I wrote a white paper in 2009 titled “The Coming Consolidation in Higher Education.” I argued that demographic, technological, regulatory and industry changes were far outpacing higher education’s willingness to adapt, therefore higher education’s value proposition would be challenged and survival would be tested.

What I admire most about TJU is … their unrelenting commitment to their students.

Something most people don’t know about the merger is … it is a true merger of equals with 50 percent of the student body being from PhilaU and 50 percent from TJU. The two co-chairs of the academic board are from PhilaU (Eileen Martinson) and TJU (Dick Gozon).

Becoming Philly’s 5th largest university means … we have the scale within the academic entity to offer a vast array of experiences for our students in a university doggedly committed to their careers. The fact that we are part of a $5 billion enterprise affords even greater opportunities for leverage of the student and faculty experiences and building of a powerful brand.

The merger will personally allow me to … support the important work of the faculty, the needs of the students and the value of the alums’ degrees in a much larger institution. We can  become internationally recognized as a great university.

I’m excited about … students who see the world as a wonderful place full of potential for good in which they will lead.

A Philly corporation that impresses me is … MilkCrate, started by PhilaU Sustainable Design alum Morgan Berman.

The last song I listened to was … Stars (Esenvalds)

When I want to relax I … watch PhilaU athletic teams, play tennis, read.

My children tell me I’m … a great dad, handsome, intelligent and humble.

I take my job seriously because …”education is the font of all goodness”!

In five years I see myself … disrupting.