Protesters at City Hall on Tuesday said the Chamber, Comcast, CHOP and Drexel should be ashamed to support the widening of the gender pay gap. 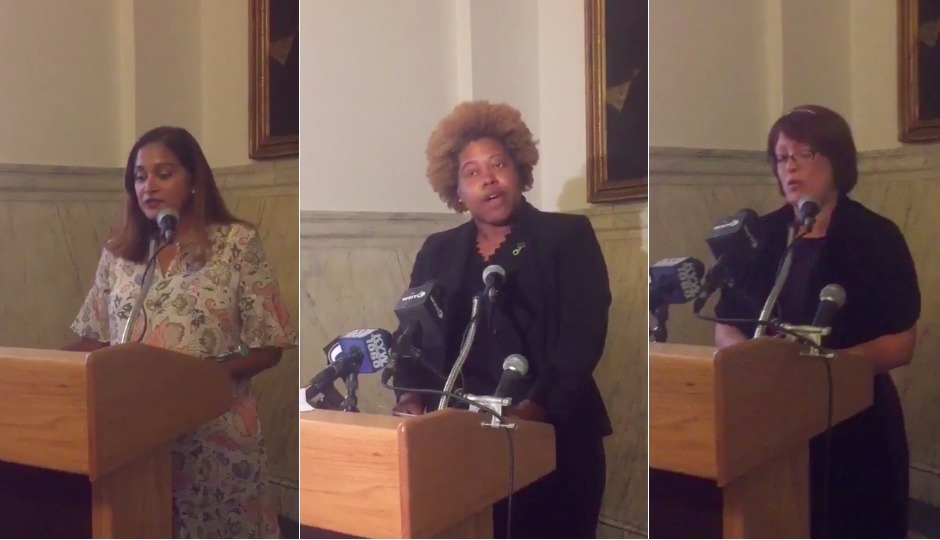 For the first time since Philadelphia’s wage equity law has come under attack, members of the public came forward on Tuesday to express their support for the legislation. At the same, the advocates — all gathered at City Hall—expressed strong disproval of the 13 city businesses that have attached their names to the Chamber of Commerce’s lawsuit against the law.

“The Chamber and the corporations who stand behind the lawsuit are always on the wrong side of progressive legislation,” Katherine Black, treasurer of the Philadelphia Coalition of Labor Union Women, who helped organize the event told Philadelphia magazine. “They say they care about pay equity but they don’t want anything mandated. They can’t take any scrutiny, and we can’t count on them to do the right thing.”

Black added that most of the 13 businesses and institutions are run by white men and have histories of leadership that lack both women and minorities.

The wage equity law, which was unanimously passed by City Council last year and signed by Mayor Kenney at the start of 2017, was supposed to take effect on May 23 this year and would have prevented employers from asking applicants about past earnings. The law’s intention is to close the pay gap between men and women, the city has said, but the Chamber of Commerce, along with thirteen member businesses, says the law would unnecessarily complicate business operations.

One institution backing the lawsuit is Drexel University. In a speech at Tuesday’s event, Drexel Politics and Pre-Law student Ejaz Momen, also a member of the Pennsylvania Student Power Network, said he was “shocked and horrified” to learn that Drexel President John Fry was behind the lawsuit.

Drexel student: When I found out that John Fry @DrexelUniv has led the @ChamberPHL against wage equity law, I was shocked and horrified. pic.twitter.com/kMiTEVi7m6

He addressed President Fry directly: “You call this bill unnecessarily burdensome and an affront to the rights of corporate entities, but what about the burdens placed on the rights of the people of Philadelphia?”

Drexel student: We live in a nation where women on avg earn between 56-88% of what male counterparts are paid for same work. pic.twitter.com/GdebbOlEbN

Melissa Robbins, a delegate for the Philadelphia chapter of the National Organization for Women acknowledged that Philadelphia, a city of many firsts, could’ve also been the first city to implement wage equity legislation if it weren’t for the Chamber’s lawsuit. (Only New York City and Massachusetts have so far passed similar legislation.)

.@onairmelissa of @philanow: We are a city of many firsts. We came very close to being 1st US city to implement legis. to close pay gap. pic.twitter.com/3azMn4xGuH

She went on to demand that the Chamber withdraw its complaint.

.@onairmelissa of @philanow: Shame on @ChamberPHL. Withdraw your lawsuit. To @comcast, @ChildrensPhila do you intend to be part of problem? pic.twitter.com/9c5HVJSd58

Attorney Rupali Patel Shah with Philadelphia United for Progress argued that salary history isn’t relevant to an applicant’s qualifications and fitness for a position. She also addressed the argument that the ordinance violates the First Amendment rights of businesses. “This isn’t about an employer’s right to free speech or about fairness to the employer being able to value the position. […] This is about employers paying less and getting more,” she said.

Attorney Rupali Patel Shaw: This is about employers looking to score a bargain by paying less and getting more. pic.twitter.com/a0vks6M7qV

Daisy Cruz, 32BJ SEIU Mid-Atlantic District leader, pointed out that women of color are especially harmed by the pay gap in Philadelphia. In a statement she said, “Philadelphia is taking action to raise wages, earn sick days and to pave the way towards pay equity. The corporations who profit off the hard work of women in this city should stop blocking their progress.”

Daisy Cruz of @32BJSEIU: It's a shame that these big corps. would actively deny women, mostly women of color, equal pay. pic.twitter.com/myrJf7PKjv

The Chamber submitted a revised lawsuit against the legislation after a judge tossed its original suit because the organization failed to identify a business that the law would harm. The revised lawsuit names top Philly businesses like Comcast, CHOP, Drexel University, Diversified Search, and FS Investments as companies that would be harmed by the law.

“The Philadelphia business community fully supports closing the gender wage gap and pledges to seek ways to ensure that every worker is paid fairly regardless of gender,” the Chamber said in a statement. “As an advocate of the regional business community, the Chamber recognizes that addressing the evolving demographic changes in our region is fundamental to the growth and sustainability of our members. Creating an inclusive environment that engages individuals reflective of the full spectrum of our region is key to the success of Greater Philadelphia. This Ordinance, however, is not the answer to closing the gender wage gap.”

The city says it will adhere to its agreement to not enforce the law until the Chamber’s request for a preliminary injunction is resolved.