The former Phillies slugger wants to get back to the big leagues, but his new gig with SeventySix Capital is laying the groundwork for life after baseball. 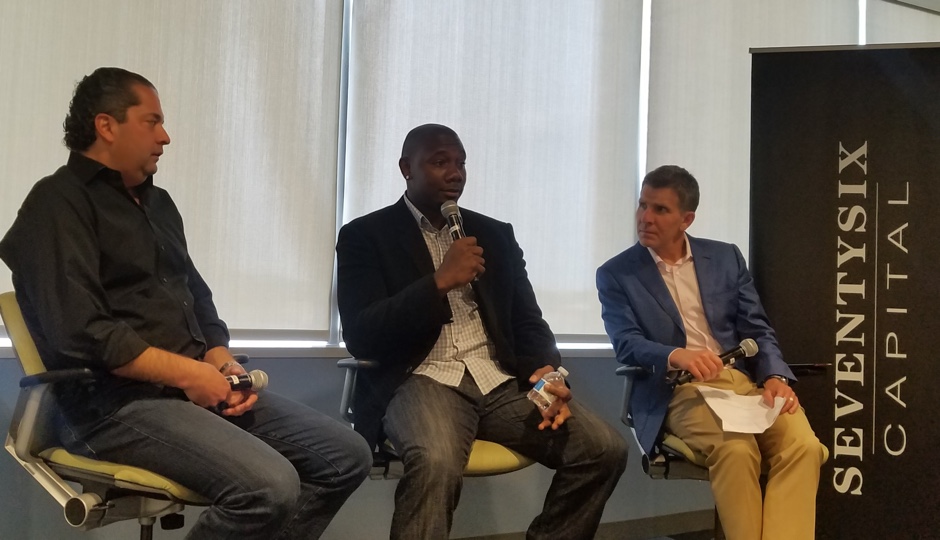 Former Phillies slugger Ryan Howard really sees a future for himself among entrepreneurs. Last month, we learned that the former National League MVP and World Series champion is officially a partner at SeventySix Capital. Thursday evening, he sat down for the first time before the public as a VC with fellow SeventySix Capital partner Wayne Kimmel and Villanova Law’s Moorad Center for Sports Law director Andrew Brandt.

Coming off an abrupt end to his minor league contract with the Atlanta Braves organization, the former first baseman told the audience how he plans to balance his push for the big leagues with his new role at the firm. And in case you were wondering how he’ll be useful to budding business magnates, he gets into that also explains why there’s ample room for him in the growing sports business and innovation field. Here are some highlights from the discussion:

On why he still wants to play:
For a lot of people [where I am right now] would be very bleak. There can be times where you want to give up but [you should] never stop moving. I always believe in myself, and I believe in my ability on and off the field. I am going to stick with it. I’ll be back out there at some point. For me, there’s always been a lot in the tank. I always made a promise to myself that when I walk away from baseball for good, I don’t want to have any regrets. I want to be completely happy putting down my cleats, putting down my glove, putting down the bat, watching my son who’s aspiring to play baseball and being that dad holding signs trying to embarrass him. I just want to leave it all out there on the field and just feel good.

On how he envisions his role with SeventySix Capital as mentor to young athletes on money management and life skills:
Guys that come in at such a young age don’t necessarily see past their career. It’s about trying to get them to understand and recognize that “hey, I’m going to have more of a normal life outside of whatever my sport is than I will actually be able to play my sport.” If you’re lucky you pay for 10 years, 15 years. If it was great, you’re playing for 20 years. But, you may still live another 40 or 60 years after that. Everything is cool as you’re playing and those big checks are coming in, but it’s about what happens when those checks stop coming in. How have you been handling your money? And even for those guys who don’t necessarily get the big contract, [it’s about] how they handle their money and how they still have an opportunity to create wealth even though they weren’t able to get those big contracts like some of their teammates did.

On what drew him to the VC world:
I’d always have conversations with some of my old teammates about business and life post-baseball. I wound up having a conversation with my agent. I told my agent I want to start to prepare now for my post-baseball career. I’d rather be proactive instead of reactive. The problem is a lot of athletes get to the end of the line, and they’re like what do I do next. I’m trying to have that seamless transition of starting this process as I continue to want to play and have things working with Wayne, Jon [Powell] and the rest of the SeventySix Capital team. So when I do lay those cleats down and pick up the sports coat, we’re ready to rock ‘n’ roll.

On meeting the SeventySix Capital team:
[Wayne and I] met through a mutual acquaintance and immediately, just within the first 10 or 15 minutes of talking to John and talking to Wayne, I was like, “OK, these guys are pretty cool.” We’re very like-minded and our ideals met on what we’re trying to accomplish. We want to do big things, do great things and change the world for the better. We kept having meetings and lunches and brought our families together. We just clicked. It was very organic, which is big for me. It was very genuine, and that’s hard to find.

On who inspired him to think about business and VC:
I looked at Magic Johnson and what he’s been able to accomplish. Michael Jordan and what he’s been able to accomplish. One other person who really stuck out to me was Jay Z. Jay Z was the person who was able to use his platform as a rapper to now become the business mogul that he is today. [I looked] at what a lot of the other guys like Lebron have done. And looking at what Andre Iguodala has done with the Golden State Warriors. I believe they created a team VC where they’re doing a lot of stuff in tech. You see that the athlete or the entertainer is not just the athlete or entertainer anymore. As opposed to being the person that’s collecting the check, they are now trying to be the person that’s writing the check.

On how to identify disruptors and the next big thing:
The world is ever changing. You can go all the way back to 8-tracks and CD players to discmans and walkmans. In meeting with these young entrepreneurs, [I’ll] really get to know them and get to see the passion they have for whatever it is that they may be doing or are trying to bring to the table. It’s going to be very interesting to see where that leads. You don’t necessarily know what the next thing could be. Nobody knew that Google was going to be where it is. The cardinal rule I’m sure for everyone in this room from a parent was don’t ever get in a car with a stranger. And now you have Uber where you get in a car with a stranger. Who know that would become a billion dollar business. So that’s the excitement of the wait and see.

On his end-goal with VC and potentially managing a team:
I would love to get to the point to be able to be in an ownership group some day. But right now I’m enjoying my time with Wayne and Jon and also being able to look at trying to help these young entrepreneurs develop their dream. I’ve been able to live out my dream, and baseball’s taken me to a lot of great places where I probably never would’ve otherwise gone. I’m excited about the opportunity to be able to provide that for somebody else or help somebody else grow that seedling of a dream as far as their company, to be able to make a change in the world.