Their wealth is tied to soup, cable, beer and sports teams. See who made the list. 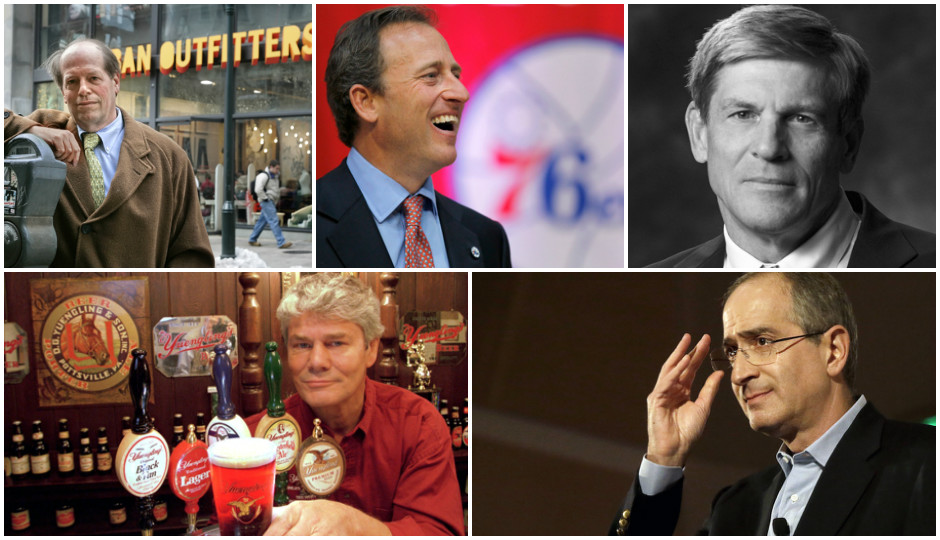 Forbes just released its annual ranking of the richest people on the planet and the list hasn’t changed much from last year, at least for the billionaires tied to the Greater Philadelphia area. Overall, the rich are still rich, though some like President Donald Trump have dropped more than 200 spots. Here are the Philadelphia-area billionaires on the 2017 list and what Forbes had to say about their source of wealth.

96. Ronald Perelman $12.5 billion
The Perelman family has famously been active in philanthropy, especially with big donations to the University of Pennsylvania. In 2011, Ronald’s parents gave the institution $225 million, the single largest donation in the school’s history. Ronald, a Penn alum, followed up with a $25 million donation in 2013 to create the Perelman Center for Political Science and Economics. Here’s what Forbes had to say: “Ron Perelman, a consummate dealmaker, has built a fortune on a diverse array of holdings, from candy to cosmetics, and earned a reputation as one of the fiercest corporate raiders of the 1980s. He’s a longtime shareholder in Revlon, and owns Humvee-maker AM General, among other firms. He learned about business from his father, attending board meetings with him when he was in elementary school. An avid art collector, in June 2016 he announced a $75 million donation to construct a performing arts center at the World Trade Center site in Manhattan. Perelman has eight children from five wives.”

460. Mary Alice Dorrance Malone $3.9 billion
Said Forbes: “Mary Alice Dorrance Malone, the largest shareholder of Campbell Soup, sits on the company’s board along with her brother Bennett. Her grandfather John T. Dorrance Sr. invented the condensed-soup formula and transformed the company in 1897. Devoted to equestrian sports, she owns expansive estates and performance centers in Pennsylvania and Florida.” Dorrance has also consistently been named the richest person in Pennsylvania by Forbes.

717. John Middleton $2.8 billion
“John Middleton sold his family’s storied tobacco business to Philip Morris-parent Altria for $2.9 billion in 2007. The original family business, John Middleton Inc., was founded as a small retail tobacco shop in downtown Philadelphia in 1856 by his great-great-grandfather John Middleton. The company began manufacturing in the 1950s and, by the end of the decade, had shuttered its retail business to focus on selling its own products. The company launched the now-famous Black & Mild cigar brand in 1980. Middleton bought out several of his relatives’ stakes in the company in 2003 for about $200 million amid the tobacco lawsuits that threatened to cripple the family business. Now, Middleton’s sister Anna Nupson has taken legal action and is asking the court in Montgomery County, Penn., to strike a new deal; Middleton has denounced Nupson’s proceedings. Middleton is also the largest individual shareholder in the Philadelphia Phillies, with a stake of roughly 50%. He sits on the board of trustees at Amherst, his alma mater, and earned his MBA from Harvard Business School.” Middleton’s also big on philanthropy. He’s involved with organizations like Project HOME, and at Philly Mag’s 2016 ThinkFest, Middleton headlined a talk called “Innovation in Business, Sports and Philanthropy.”

896. Michael G. Rubin $2.3 billion
Michael Rubin’s story of going from bankrupt to billionaire is a famous one. According to Forbes, “When he was age 9, Michael Rubin told his parents’ friends that he wanted to grow up to be a “millionaire.” At age 15, Rubin founded a ski-tuning shop in his parents’ basement. By the time he graduated from high school, he operated three stores called Mike’s Ski & Sport. Later, the Villanova dropout created GSI Commerce, which he sold to eBay for $2.4 billion in 2011. As part of the deal he paid $500 million for majority ownership of 3 assets eBay didn’t want: sports merchandiser Fanatics, flash sales website Rue La La and ShopRunner, which now operate under holding company Kynetic. In February Fanatics acquired UK-based Kitbag, an e-commerce retailer for licensed soccer apparel, for $17 million. Rubin owns minority stakes in the Philadelphia 76ers.”

745. Joshua Harris $2.7 billion
Harris has been moving the Sixers towards business innovation and according to Forbes, he knows how to time an investment. Said Forbes: “His Philadelphia 76ers have had a losing record every year since 2013, including an abysmal 10-72 finish to the 2015-2016 season. Still, the team’s value has risen to $800 million since he and a group of investors bought it for roughly $290 million in 2011, and may soar even higher after securing Ben Simmons as the 2016 number one draft pick. Harris is hoping for similar returns on his stakes in the NHL’s New Jersey Devils, which he acquired in 2013, and the English Premier League’s Crystal Palace Football Club, which he picked up in late 2015. Harris’ very lucrative daytime job is senior managing director of Apollo Global Management, the buyout firm he co-founded in 1990 with Leon Black and Mark Rowan. The trio started the private equity mega-fund after their previous employer, Drexel Burnham Lambert, collapsed in scandal. The son of an orthodontist, Harris attended the University of Pennsylvania and got his MBA at Harvard. He is a former wrestler and still competes in marathons and triathlons.” Harris made headlines recently for meeting with President Donald Trump.

1161. Jeffrey Lurie $1.8 billion
“Jeffrey Lurie is a PhD-holding former professor, but he’s more widely known as the outspoken owner of the Philadelphia Eagles. After earning his doctoral degree at Brandeis, Lurie taught social policy at Boston University before taking an executive role at General Cinema Corporation, the film company founded by his grandfather. He then started Chestnut Hill Productions in 1985, where he produced a string of mostly forgettable movies. In 1994 he took out a loan to buy the Philadelphia Eagles for $185 million. Despite having to give up a stake in the Eagles during his 2012 divorce, his stake in the $2.5 billion team still represents the bulk of his fortune.”

1161. Richard Yuengling Jr. $1.8 billion
D.G. Yuengling and Son was recently named the top craft brewery of 2016, though the brewery faced boycotts after owners voiced support for President Donald Trump. According to Forbes, “Dick Yuengling turned his family’s struggling coal-town brewery into a powerhouse with $550 million in sales in 2015. He is the fifth generation to own D.G. Yuengling & Son, America’s oldest brewery. When he bought out his father in 1985 it was producing 137,000 barrels per year; today it’s one of the country’s five largest beer companies, pumping out some 2.8 million barrels annually. Yuengling drives a dirty Toyota Camry and heads to work so early every morning he has to pick up the newspaper directly from the distributor. Like the four generations before him, he refuses to sell out. Instead, after three decades lording over the business (sometimes manning forklifts and personally backing semi-trucks into his loading dock) he is preparing to hand the company to his four daughters — if he can let go of the reins. ‘If I reach 100, I’ll retire,’ he half-joked recently.”

1234. Brian Roberts $1.7 billion
“Comcast CEO Brian Roberts tried and failed to acquire Time Warner Cable, his next biggest competitor, for $45 billion in 2015. The combined company would have had even more national sway with content providers and local pricing power, but the deal couldn’t get past regulators. (Charter Communications ended up acquiring Time Warner Cable in May 2016.) Roberts has built Comcast on bold acquisitions, snapping up NBCUniversal from GE in 2013. Roberts’ father Ralph cofounded Comcast in 1963 with the purchase of a 1,200-subscriber cable system in Tupelo, Mississippi, and took it public in 1972. The younger Roberts had his first Comcast internship at age 15, then made a rapid rise through the company, becoming president in 1990 at age 31 and inheriting the majority of his father’s stock in 1999. A Philadelphia native, Roberts received his B.S. from the Wharton School at the University of Pennsylvania, where he was also an All-American in squash.” The Roberts family was also recently named to Philly Mag’s “Great Philadelphia Families” list for their contributions to institutions like CHOP and the Barnes Foundation.

1678. Richard Hayne $1.2 billion
Hayne recently answered for Urban Outfitters’ lackluster earnings by saying that the country’s retail bubble has burst and the company hasn’t stayed too far from controversy. Forbes said: “Former hippie Richard Hayne opened his first apparel shop with his ex-wife in the mid-70s near the University of Pennsylvania with only $4,000. Today, Urban Outfitters is a nationwide chain with more than 200 locations and over $3 billion in revenue. Hayne, Urban Outfitter’s chairman, became the company’s CEO in 2012 after former CEO Glen Senk left to run New York-based jeweler and watchmaker David Yurman. Urban Outfitters, which targets teens and young adults, has been at the center of controversy over the years, and its products have offended a wide swath of America, including the transgender and gay communities, Navajos, Irish Americans and Jews. Together, they also own the 700-acre Doe Run Dairy farm in Pennsylvania, which produces cheese. Hayne’s wife Margaret sits on Urban Outfitters’ board and is CEO of wholly-owned brand Free People.”