Military Veterans Turned Entrepreneurs Have Space of Their Own in Philly Dan Tobon, a veteran entrepreneur at the grand opening of The Bunker. (Comcast Photo/ Joseph Kaczmarek)

Dan Tobon sees plenty of similarities between his time in the Army and his new life as an entrepreneur. The founder of Starchup – basically a GrubHub for laundry and dry-cleaning — Tobon said both groups attract risk takers who think on their feet, solve abstract problems and have a unique ability to stay calm in stressful situations.

“Being an entrepreneur and being a veteran are very similar,” he said. “Everyone thinks it’s very cool, but would not do it themselves.”

Tobon is just one of the veteran entrepreneurs who will run his business from The Bunker, a new co-working space housed at Benjamin’s Desk‘s expansive location at the Curtis Center in Old City. It will provide working space, mentors, access to investors, pro-bono services and community events for veteran-led startup companies.

Founded in Chicago, The Bunker has expanded to seven cities, including Austin, Los Angeles and Washington, D.C. Tobon said The Bunker aims to provide free rent and won’t take a percentage of an entrepreneur’s company.

Starchup – a software and mobile application for dry-cleaning created by Dan Tobon (Army).

GoPaperboy – a hyper-local marketplace to help students build the job they want and help families find the help they need created by Jen Gallagher (military spouse and former attorney).

Comcast serves as the first national corporate sponsor of The Bunker and is a founding sponsor of the Old City location. At a launch event Monday morning, Comcast Senior Vice President David L. Cohen said veterans are some of the “best and brightest entrepreneurs.” (Comcast recently pledged to hire 10,000 vets over the next three years.)

“Comcast was a startup 50 years ago, and today we are proud to help develop the next-generation of startups to build great products, grow a diverse workforce, and continue to see existing and new businesses bloom,” said Cohen.

Rittenhouse Is ThisClose to Having Its Own Green Eggs Cafe 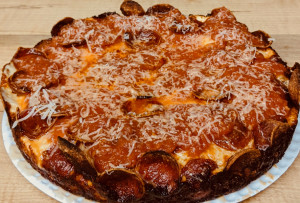 Pizza Gutt Is Taking His Talents to East Passyunk