This Philly Writer Was Super Burned Out, So She Took Two Years of “Radical Rest”

Caroline Dooner, author of new book Tired As F*ck, shares why saying no and slowing down is so important in our hustle culture. 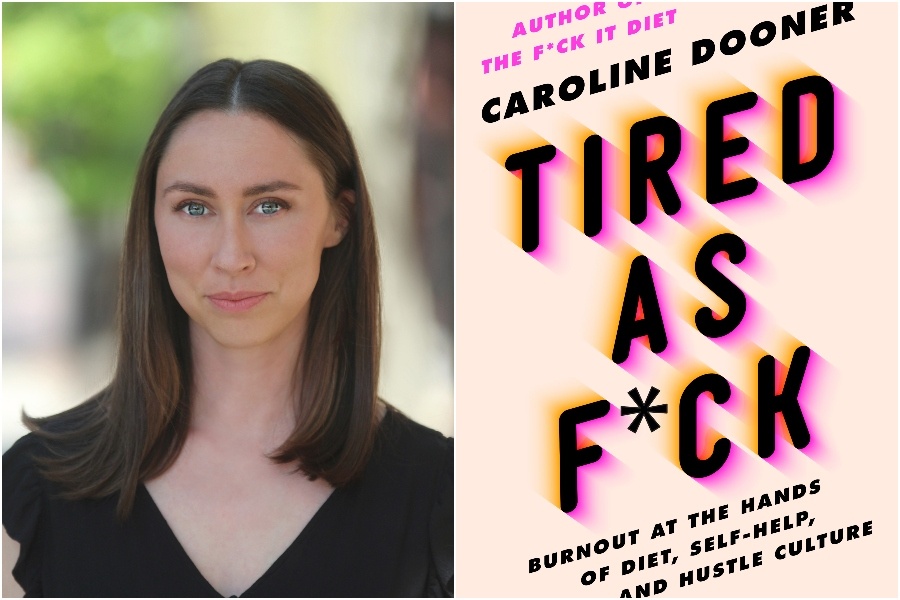 It’s no secret that much of the United States operates on full speed in practically every area of life. Americans work too much (leaving us with basically no free time), our social calendars are often bursting at the seams, and we’re conditioned to believe we have to say yes to all requests or invitations — because if we don’t, we might look incapable, feel guilty, or experience FOMO.

But running this seemingly never-ending marathon of activities and to-do’s can get exhausting to the point of burnout. (Three words: The Great Resignation.) It’s why Caroline Dooner, Philly-area native and author of new book Tired As F*ck: Burnout at the Hands of Diet, Self-Help, and Hustle Culture (and The F*ck It Diet, 2019), decided she was going to make powerful changes in order to “learn how to live a more restful life” in a culture that praises — and often demands — hustling.

We chatted with Dooner about her decision to take two years of “radical rest” (and what that actually means), how she slowed down in our always-on-the-go society, and what there is to be gained from saying no to things we don’t actually have to do.

What led you to rest for two years?
About six years ago, I found myself really burned out. I was taking on too many things and saying yes to things I didn’t actually want or have to do, as well as feeling the effects of tirelessly dieting and making myself out to be some kind of never-ending self-improvement project. This was around the time Marie Kondo became big, so I decided to declutter my entire apartment in the hopes that I’d feel lighter and less stressed. I did feel that way for the first few days, but soon enough, I realized what I was really craving was a reevaluation not just of physical objects, but also of my life activities and my mental state.

I decided I was going to change the things I didn’t want or have to do. What had been weighing me down and exhausting me was not just physically doing things, but also putting undue pressure on myself and feeling guilty if I did take time to myself. I thought, “What if I got rid of all the beliefs and expectations about what I think I’m supposed to be doing, and see how that feels and if that helps?”

But Tired As F*ck isn’t about those two years …
Originally, I thought the book was going to be titled Two Years of Rest. As I wrote the book, though, it turned into a story more about becoming exhausted, especially by external cultural forces and learned or conditioned beliefs. So I changed the title. I didn’t want people to pick up the book and expect a story about what happened during my two years of rest — because that’s not what it is.

Is that why it isn’t really a self-help book, then?
My first book, The F*ck It Diet, is more of a self-help book. But Tired As F*ck is about my experiences with extreme dieting and extreme self-help and becoming super burned out because of them. It was clear to me that all the years I spent dieting and expending my energy led to my exhaustion, which is why this book needed to zoom out a lot further in order to tell that story. Tired As F*ck does offer chances for reflection and making connections, especially in the last part of the book. There are some suggestions and thoughts on how people might help themselves through their own experiences with exhaustion.

Also, the book is, in a way, a memoir about self-help in the hustle culture we live in. Many people want a quick-fix or straightforward solutions to what’s ailing them because we exist in this society that tells us we don’t have time to be held down. But resting involves slowing down and thinking about your life critically, which can be hard for people to do when everything around them is saying, “Go! Go! Go!”

In the day-to-day, I said no to a LOT of socializing. Minimizing your social life isn’t going to be restful for everyone, but for years, I was out pretty much every night with friends. I had a hard time saying no to socializing because I had this fear that life would just pass me by and people wouldn’t want to hang out if I declined a night out. In actuality, my friends totally understood that I needed to carve out more downtime for myself. (I also took a break from alcohol because I knew drinking wasn’t helping me feel rested.) After a little over two years, I got to the point where I felt physically and mentally energized to reintegrate socializing into my life. Then the pandemic hit … of course. [laughs]

There were professional and personal opportunities I did say yes to — I didn’t decline everything — because I knew they were things I genuinely wanted to do. For me, it was about discernment and working through any guilt that might crop up if I did say no. Rest doesn’t mean lying in bed and having someone feed you grapes. That’s not practical — even if you have the money for it, I feel like most people would get bored. (I would.) What I knew I needed to learn — and I think what many others living in our hustle culture would benefit from, too — is how to operate in the world in a more restful, compassionate way, rather than using things (i.e., social media, dieting, alcohol) to escape.

Why do you think hustling is glorified in American culture?
Going nonstop helps distract people from their emotions. People often know they’re feeling a certain way, but don’t often take the time to figure out why. In school, we learn how to take tests, be productive, get good grades, listen to the rules — all steps that we assume will make us smart and successful. But all those things prioritize a very specific way of life that excludes a huge component of our humanness: emotions. Many people don’t often learn how to effectively process their emotions or take care of their mental health. This results in adults believing that showing emotions is weak, and therefore, push them down or become numb to them. It’s why we use things like diets, alcohol and social media — because they often keep us from navigating our emotions in healthy ways.

And the pandemic really put a wrench in that, right? We were forced to sit with ourselves and rest.
At the beginning of the pandemic, I was like, “Wow all these things are canceled — I have so much free time!” Even though I wrote a whole book about being burned out, I sometimes do fall into the trap of thinking that I can take on extra stuff when my calendar opens up. I took on work projects at the start of lockdown. (But also, I was just coming off my two years of rest, so I had more energy and felt ready to start doing things again.) After a couple weeks, though, I felt the exhaustion kicking in again. I have to imagine other people were in the same boat and feeling a similar uneasiness over wanting to fill all this new “free” time. But as I mentioned, people don’t often enjoy or know what to do with downtime because it forces us to reflect, feel, process, and take stock of how we’re actually doing and feeling. Think about how everyone magically picked up multiple new hobbies during lockdown!

But also, the pandemic brought on an extra level of tasks for many people, especially anyone who has had to navigate at-home schooling or juggle work-life balance under one roof. I think the pandemic has made people more aware of burnout and more mindful about resting when and how we can. And, I do think more people are taking stock of not just the physical causes and symptoms of burnout, but the emotional and mental ones, too. That’s huge.

For some people, hustling is an act of survival, or the only way to make ends meet. How do you think privilege plays into rest?
There’s absolutely an intersection between privilege and rest. The more privilege you have, the more opportunities you have to lighten your load. Also, on a practical level, there are things we *have* to do that don’t “spark joy,” to channel Marie Kondo. That’s just life. But there are many things that don’t actually benefit our happiness that we can cut out — we just typically don’t think we have the permission to do so.

I believe anyone can identify areas in their life that they do have control over in order to pursue rest. Maybe it’s changing the way you talk to/about yourself, what you do in your spare time, and who else and when you give your mental and emotional energy to. It’s what I mean in the book when I say that rest is a state of mind. Sure, it can be physically enacted, but it’s also this mental and emotional space we occupy, which either depletes or fulfills us.

What have you learned about enacting more mindful rest into your life that you hope others will benefit from?
Being burned out manifests in different ways for everyone — there are various forms of exhaustion. It isn’t just not having downtime or doing the same thing over and over again. (Though both will probably exhaust you.) Burnout can result from friendships that drain your energy or being too much of a couch potato. Also, sometimes rest isn’t restful because we feel anxious and guilty for doing so. There’s this pervasive belief that if we take time off, we’re not doing what we should be doing, and therefore, we must feel bad about it. That’s terrible! We don’t need to be living or thinking like that.

The results of slowing down are having more compassion and awareness and being more present. If you’re more in touch with yourself and not trying to use everything in your life to escape, then you’re better able to say, “I don’t feel like doing that right now.” It doesn’t mean you won’t want to do that very thing tomorrow or the next day, but in that moment, your body and mind need a break. Mainly, I think a lot of us don’t feel worthy of rest — as if our exhaustion isn’t as bad as other people’s exhaustion. This mindset is what perpetuates hustle and burnout culture, though. Rest isn’t earned; we all deserve it.