They're pushing the accessibility and inclusivity boundaries of modern health and wellness in Philly — and shaking things up for the better.

The year 2020, in its roller-coaster way, highlighted long-standing racial disparities and inequities in just about every sector of society, and health and wellness was no different. Despite efforts to evolve over the years, the fitness scene has long been built around the needs and wants of thin white people with disposable incomes. Though mainstream fitness still has a long way to go in becoming inclusive and accessible, outside-the-box thinkers are getting more exposure than ever here in the city and successfully calling attention to the lack of representation in broader health circles, too. As we hold all areas of life to a higher standard, the demand for inclusive, socially conscious, antiracist LGBTQIA+ fitness programming is only going to grow. Here, six in-demand Philly fitness pros who are paving the way for a more equitable wellness world. 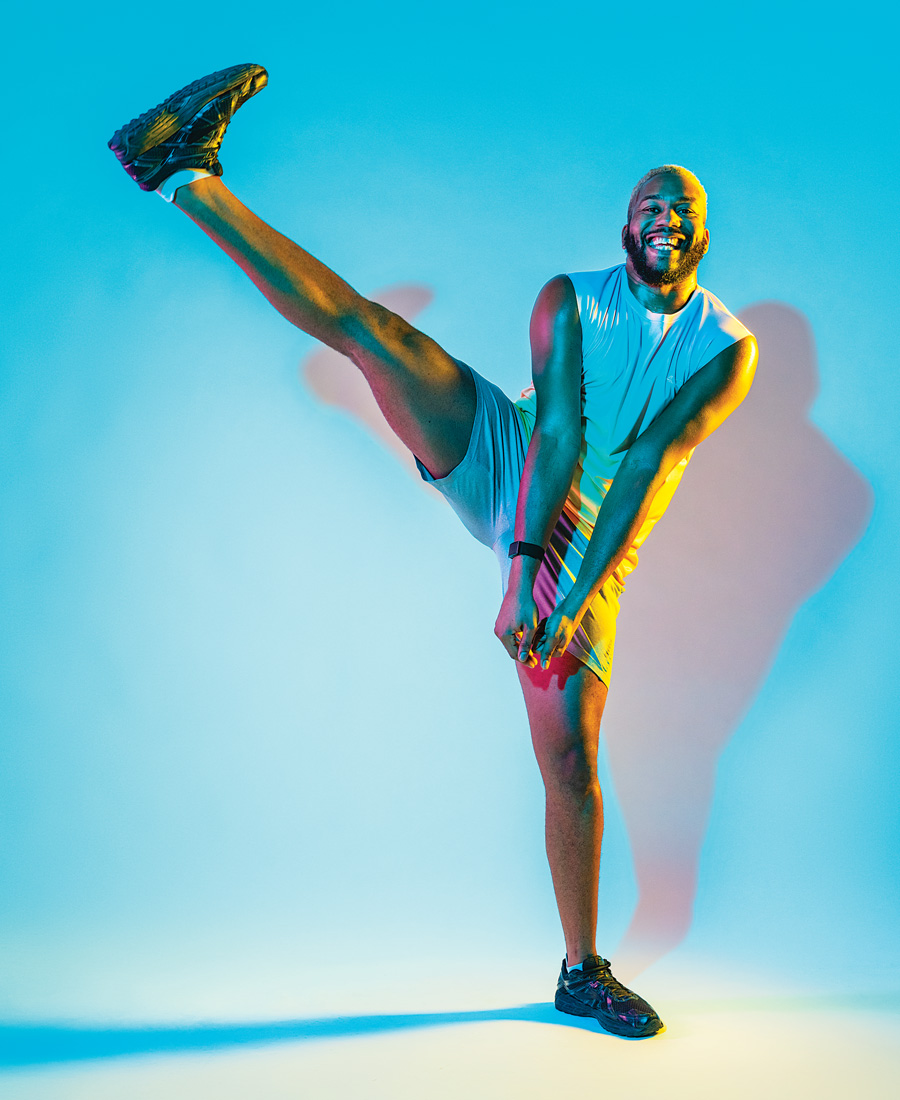 When you meet Mike Watkins, at some point you’ll inevitably hear him proclaim, “Stay festive!” — his catchphrase for keeping life and fitness peppy and positive. Watkins is a Black, queer West Philly-based licensed athletic trainer and the founder of Festive Fitness & Wellness, which offers inclusive and body-positive personal training and group fitness and wellness services on a sliding scale. He started the brand, he says, because “I wanted to give back to communities in a way that was authentic to my intersectional identities as a queer Black man.”

Festive offers functional strength training, movement and mobility, therapeutic massage, and myofascial release. Watkins is a seasoned pro at all of the above — he worked as an NCAA athletic trainer at the University of Florida, Temple University and Drexel University before launching Festive Fitness & Wellness in January of 2020. Though he gained invaluable experience at university and corporate gyms, he says, he often faced inclusivity issues. Venturing out on his own allowed him to create a space where people who also felt excluded could pursue fitness and wellness in a safe and accessible way.

And he wants to see other studios and wellness centers in Philly step it up: “There’s always the idea of creating space for gay people, but unfortunately, that realm is usually meant for a white, well-to-do gay man,” says Watkins. “That excludes a lot of people: Black people, trans people. And there’s still rampant diet-culture shame and fatphobic comments. All of that alienates queer individuals who don’t look like a skinny white man trying to get a six-pack.” 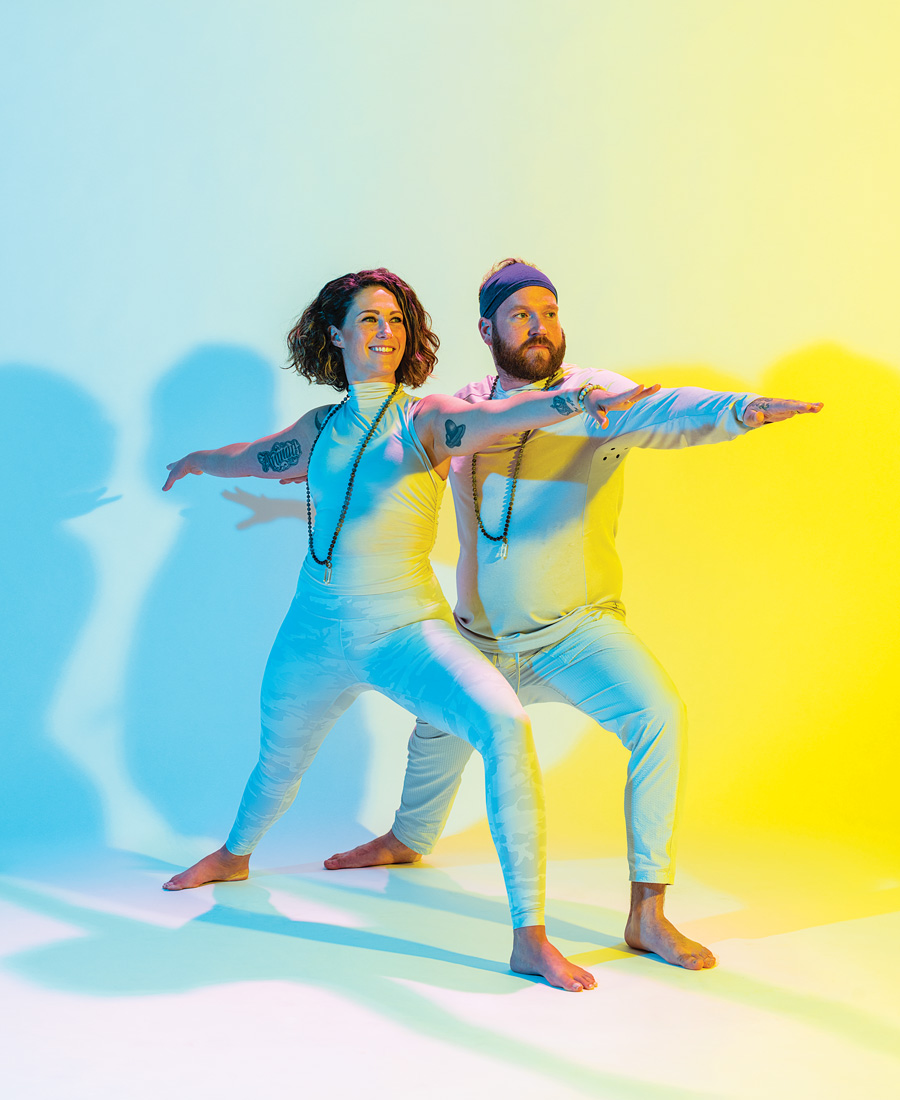 Arielle and Robert Ashford always saw substance use disorder recovery … differently. They didn’t want to set up a help network in a church basement or a fluorescent-lit office. They wanted to create a stylish, front-facing yoga studio on a busy retail street.

In 2019, on International Overdose Awareness Day, Unity Yoga opened on Main Street in Manayunk, becoming Philly’s first yoga studio and recovery center. “We wanted to bring this to a community like Philly where thousands of people need long-term support dealing with opioids and overdoses,” Arielle says. “It’s marrying physical health and mindfulness with traditional recovery support.”

Both Ashfords have master’s degrees in social work and are in recovery from substance use disorders. They’ve received two different state grants to provide free services at Unity as well as to run recovery-friendly workplace trainings for companies in the city. And they think the future is all about grassroots solutions: “There’s been a collective realization that top-down approaches aren’t working,” says Robert. “We can’t rely on the government for anything but funding. But there’s been a resurgence of community-based solutions. We’re creating things that aren’t being provided to us by larger institutions.”

The married couple’s infrared studio, though running with a modified schedule during the pandemic, typically offers a full slate of vinyasa classes paired seamlessly with an inviting space for visitors to talk about safe housing, work on their résumés, or discuss the legal and mental health consequences of substance use disorder.

“The recovery community is a disenfranchised and disempowered community with multiple identities that intersect: race, power, privilege, sexual orientation. We’re slowly seeing the humanity restored to that population, which has been dehumanized for a long time,” says Robert. “We’re creating a space where people don’t have to hide part of their identity: They can be in recovery and proud.” 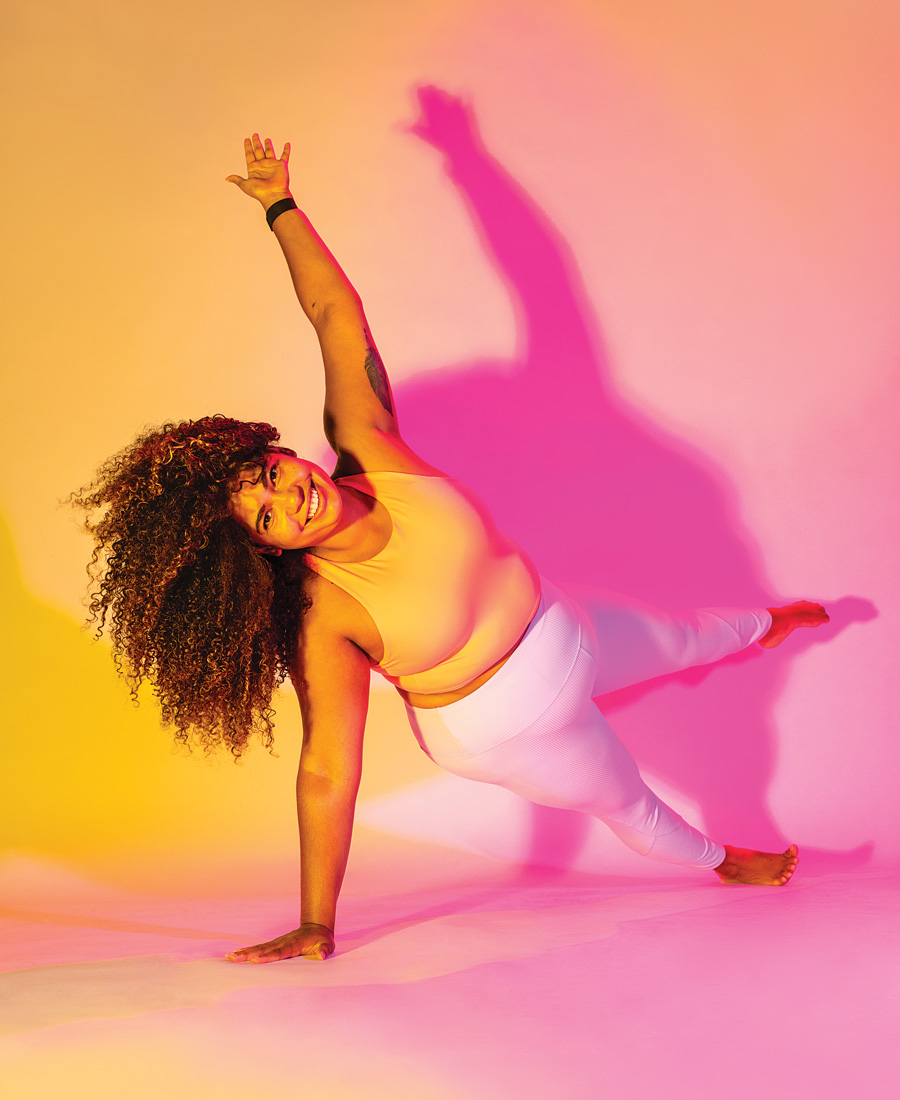 Mount Airy-based trainer Lauren Leavell adored the endorphins and mental health benefits that exercise gave her — but she didn’t love the way the wellness scene often existed hand-in-hand with body shaming, or how she didn’t see herself reflected in the industry.

In college, she realized she had been suffering from an eating disorder and overexercise due to prevalent diet culture and societal pressure implying that all bodies should look a certain way. She eventually overcame it — and decided she wanted to help others avoid the dangerous path she’d been going down.

“I loved working out, but I wanted to work out and not pursue weight loss or aesthetics as the reason,” she says. “I wanted to divest from diet culture, to show people there’s a world of wellness beyond thinness.”

She’s now a personal trainer, a group fitness instructor and a barre instructor, focused on making movement upbeat and accessible through a weight-neutral, body-positive lens. She’s launched her own fitness brand and boasts a strong social media audience of 37,000-plus Insta followers. In her group classes for her own brand and at local studios, she emphasizes those core beliefs — and aims to show that representation matters.

“I wanted to create space in fitness not just for people with bigger bodies who aren’t interested in diet and weight loss,” Leavell says, “but also for Black women who want to engage in boutique-style workouts where they often don’t see themselves. Many people look up ‘barre’ online and all the pictures are of white people, so they figure it’s not for them. We don’t see enough representation of Black men and women in health and wellness, or Latinx people or Asian people, either. It’s important for me to stand here and represent in the ways I can — and hopefully open that door for other people as well.” 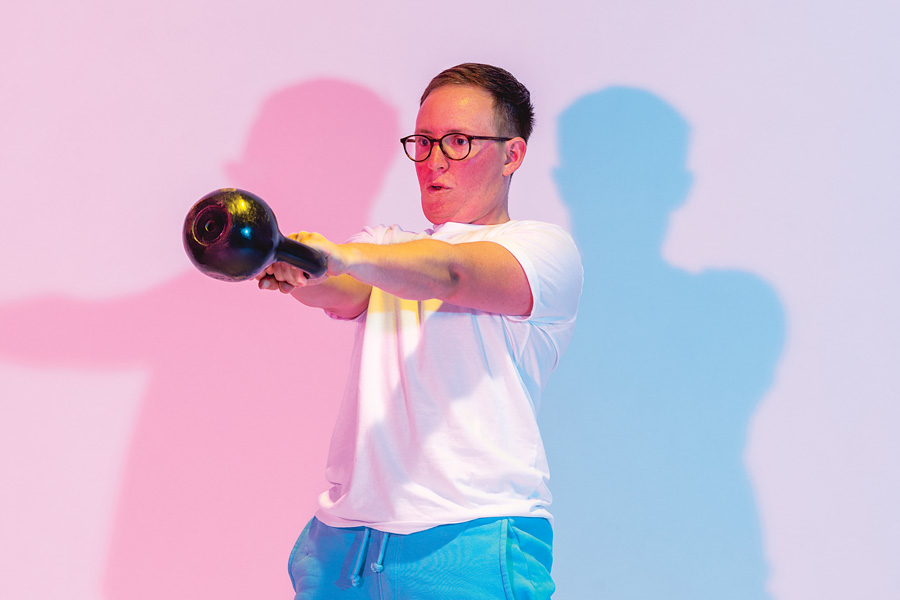 Asher Freeman, a trans personal trainer certified by the American College of Sports Medicine, was always a forward-thinker. They’d become enamored with fitness and weight-lifting during their transition, but they didn’t see many trainers who looked like them — or understood bodies like theirs — in Philly’s local health scene.

Instead of giving up, they doubled down and worked to create a space for others who might feel similarly. Freeman, who formerly worked with youth in nonprofits and as a community organizer, launched West Philly-based fitness group and training service Nonnormative Body Club in 2018. The organization drew local buzz for its championing of accessible fitness spaces for people whose bodies and identities rebel against standardized definitions of beauty and health and has been featured in the New York Times, Shape and Greatist.

Now, NBC offers sliding-scale weight-neutral group classes and individual training as well as radically body-positive workshops open to anyone who identifies as trans or nonbinary. “I work with a lot of other trans people,” Freeman says, “and I’m often offering exercise information as a way to combat discomfort in our bodies connected to gender identity. I want to use exercise as a mental tool to connect with our bodies.” Notably, they also helm an impressive Home Workout Database — a curated list of national and international virtual fitness and wellness offerings led by instructors who are “trans, people of color, fat or disabled.”

Founder of Spirits Up! 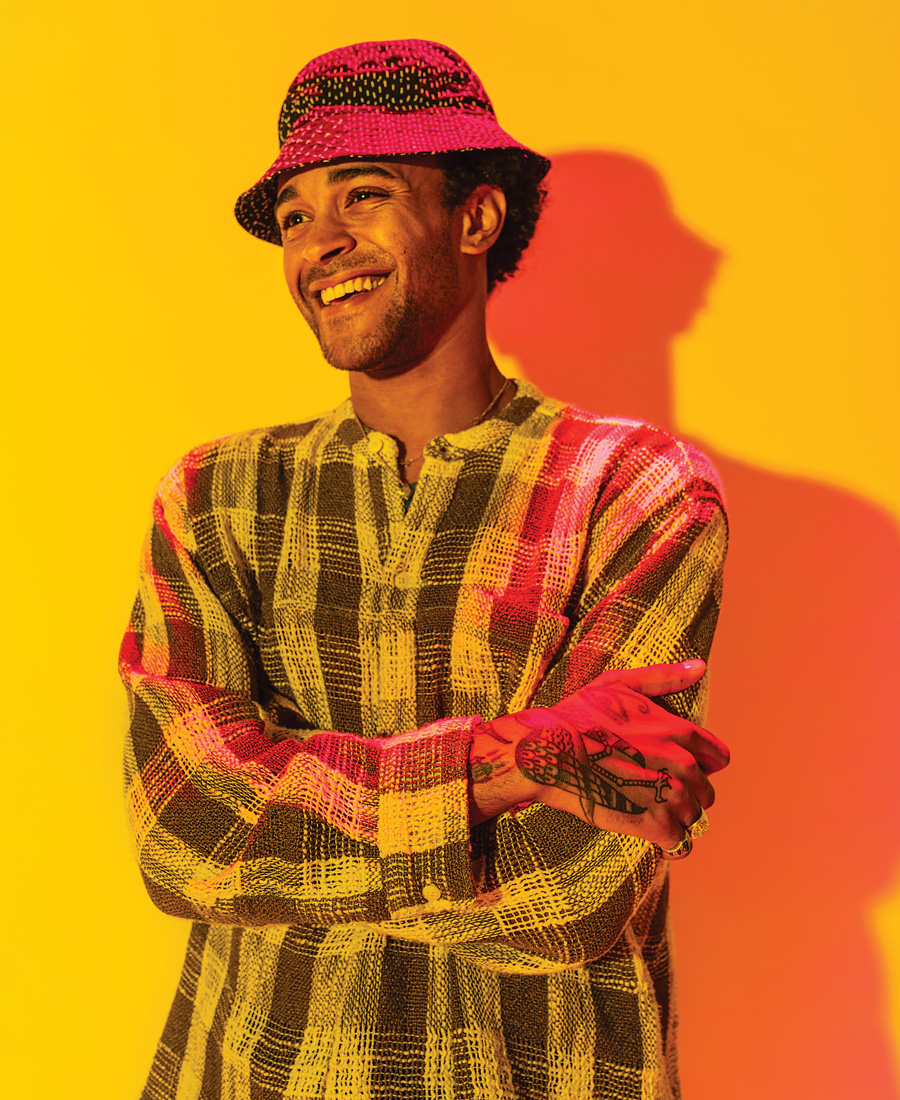 Sudan Green, founder of Spirits Up! | Photography by Linette and Kyle Kielinski

In 2020, the murders of Breonna Taylor and George Floyd sparked weeks of Black Lives Matter protests. Soon after, a dynamic new wellness group formed to help heal the Black community in Philly through yoga, meditation and mindfulness events.

Founded by West Philly activist and artist Sudan Green, Spirits Up! started with a six-day citywide protest including mindfulness and meditation events, art displays, speakers discussing healing and Black liberation, and free yoga classes taught by notable local instructors like Jean-Jacques Gabriel and Adriana Adelé. Spirits Up! (the name is based on a song of Green’s about a friend’s untimely death due to gun violence) embodies a goal of creating safe wellness spaces for people suffering from systemic racial traumas through exercise including hiking, running and yoga. Green’s life always intersected with the fitness world — he grew up in Germantown hiking in the Wissahickon, worked for fitness behemoths including Lululemon and SoulCycle, and was an active yoga practitioner. “I was having these really vulnerable moments but never had anybody that looked like me to really connect with after,” he says. “I wanted to create that space.”

Spirits Up! has since partnered with such major brands as Red Bull, Lululemon and NorthFace to execute its expanding roster of events. Future plans include launching online services, a brick-and-mortar location in Germantown, and sponsored teacher trainings for Black yogis — all in pursuit of the goal “to be the glue that connects the larger wellness community to our Black and brown communities so they have the tools to heal.”

Published as “The New Fitness Vanguard” in the 2021 issue of Be Well Philly magazine. To request a complimentary copy, follow this link.