You, an Adult, Should Take a Music Class. Here’s Why. 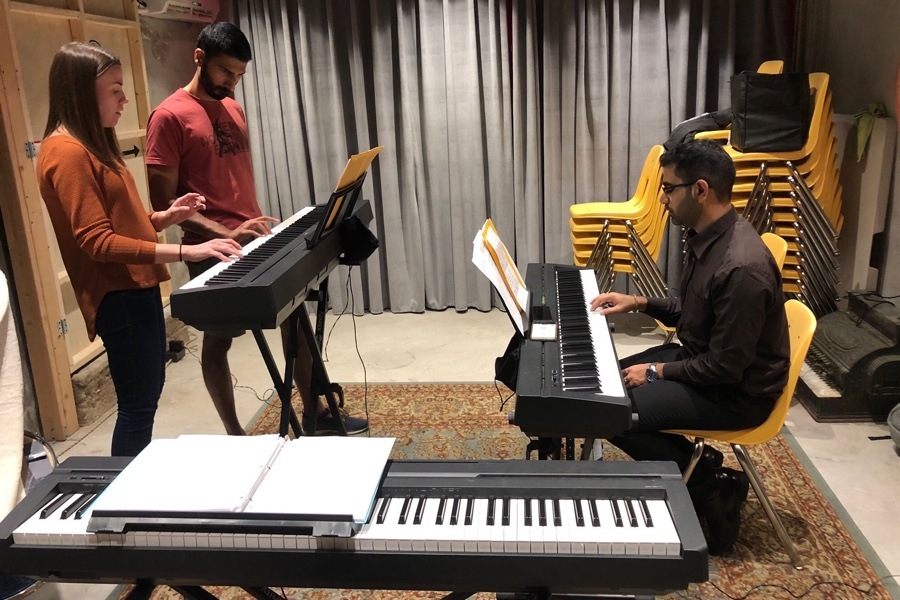 Inside a small Italian Market storefront on a December Friday night, there is confusion. A world away from the neighboring produce stands that sit dark and empty, the space inside is warm and raucous. Apparently, there had been a set list and a particular order to the acts lined up for the evening’s open mic, but circumstances have changed, and no one quite knows who will be taking the stage first.

In yellow plastic chairs — an adult-sized version of those you’d find in kindergarten classrooms — the 20 or so people inside Mister John’s Music discuss each other’s evening plans. They are all busy: hosting parties at their homes and chauffeuring kids to friends’ houses, so the set list will have to adapt based on everyone’s changing schedule. Eventually, things are straightened out and the first duo steps up: Demi and Joel, on guitar and ukulele, respectively, launch into a stunning original song.

Joshua Lehrer arrives at the keyboard next. He’s accompanied by Mister John instructors Diego, on guitar, and Eric, on percussion. It’s clear Joshua is nervous. His wife is in the audience, Joshua says, and he’ll be playing her favorite song because today is her birthday. He begins the opening strains of “Transatlanticism” by Death Cab for Cutie, occasionally stuttering and missing keys.

He jokes that he needs a drink. His wife quickly declares to the rest of the audience, “We have those at home if anyone wants to come over after!”

Other performers follow. Many are hesitant at first, but after a verse or two, fingers are surer and voices stronger. Still, sometimes musicians are off-tune. Sometimes fingers trip over the keys or slip on the strings. Sometimes equipment fails and sometimes sheet music falls to the floor. Often, mistakes are made, but they are always embraced with smiles and humor. No one here is taking themselves too seriously. 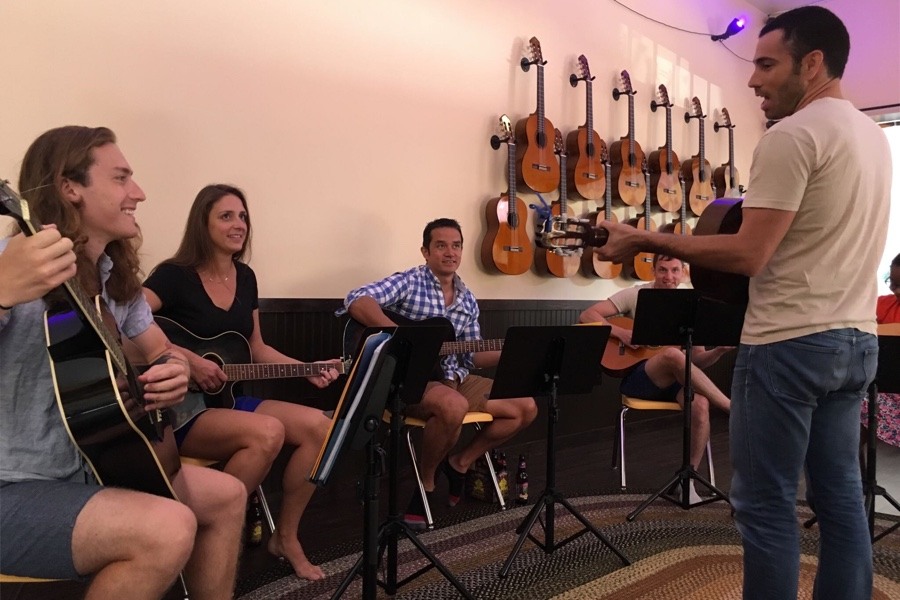 The eponymous John Francisco, owner of the establishment, wasn’t at that open mic event due to his band’s holiday tour, but ask any of the student musicians and they’ll tell you that, usually, he’s anything but absent.

Francisco’s music program, on Ninth Street in the heart of Bella Vista, opened in August of 2015. It quickly collected a mass of students, from newborns to seniors. Parents got involved in their children’s classes, signed up for their own and started making friends. They now host jam sessions and parties at their homes. They’ve formed groups that perform at the monthly open mic nights. At the heart of it all, making introductions, recommending classes and spreading pure joy, they report, is Mister John.

Francisco himself teaches classes for kids from ages 0 to 10 years old. His approach—one that fosters confidence and encourages the building of social skills—is a holdover from his days teaching early childhood classes in Chicago. Three years ago, John enlisted the help of guitar instructor extraordinaire Diego Bedoya to kick off adult classes. Today Mister John’s Music offers group guitar, ukulele, piano, percussion and choir classes to a taller cohort.

Adult classes run in eight-week sessions. Each is taught in a small group that meets at the studio for an hour and a half one evening per week. Lessons cater to students of all levels: Both fledgling musicians who have never held a guitar and lifelong pianists who are feeling a little rusty will feel at home here. Though the focus is certainly on the instruments, lessons at Mister John’s are also very social. Classmates make connections through questions of the week and energetic jam sessions. Most lessons are led by professional musicians and educators trained in Mister John’s signature teaching style.  Though the classrooms are a bit more mature than those in the kids programming — Francisco has a BYOB policy — he and his instructors approach aspects of their instruction as they would for children.

“In treating adults like children, you give them the freedom to make mistakes,” says Francisco.

It’s an attitude that’s echoed by the entire community: “I can speak in public, no problem,” says the pianist, Joshua, who is new to the program. “But playing music in front of strangers? That was hard.” After he finished his Death Cab cover, the audience erupted in cheers — perfection be damned.

“Guitar class is kind of like my Zen space,” says Mark Herczeg, a 39-year-old finance exec and guitar student. He and his two-year-old son, Sam, take classes at the studio. “You come from your stressful day-to-day and then you enter this world where you’re very focused and relaxed…it’s almost been therapeutic in a lot of ways.”

Music classes like these can be more than therapeutic. Playing an instrument engages every part of the central nervous system and is proven to contribute to a healthy brain. Study after study has shown that musicians have faster processing, better executive functioning and stronger memories, not to mention they can be less stressed and better equipped to fight depression than their non-musical counterparts. Researchers have also found that when even those who are musically illiterate pick up an instrument, there are near-instant benefits.

A 2007 study published in Aging & Mental Health studied adults ages 60 to 85 who were new to music instruction. Six months after taking piano lessons, they showed gains in memory, speed of mental processing, planning ability and other cognitive functions. And researchers from the University of Liverpool found in 2014 that even a half hour of music instruction increases blood flow to the left hemisphere of the brain.

Of course, this doesn’t include the social aspect of learning music in a group setting. Add the benefits socializing with a group of peers can have on mental and physical health to the benefits of exercising your brain, turning off your cell phone and focusing on a task, and you have one really productive—and also quite fun—hour and a half.

“This is a really amazing opportunity to meet a really varied, interesting and engaged group of adults and to actually develop friendships at a time in life when most of us are so busy caught up with work and family,” says 40-year-old emergency medicine physician Kristin Rising, who is learning to play the guitar. 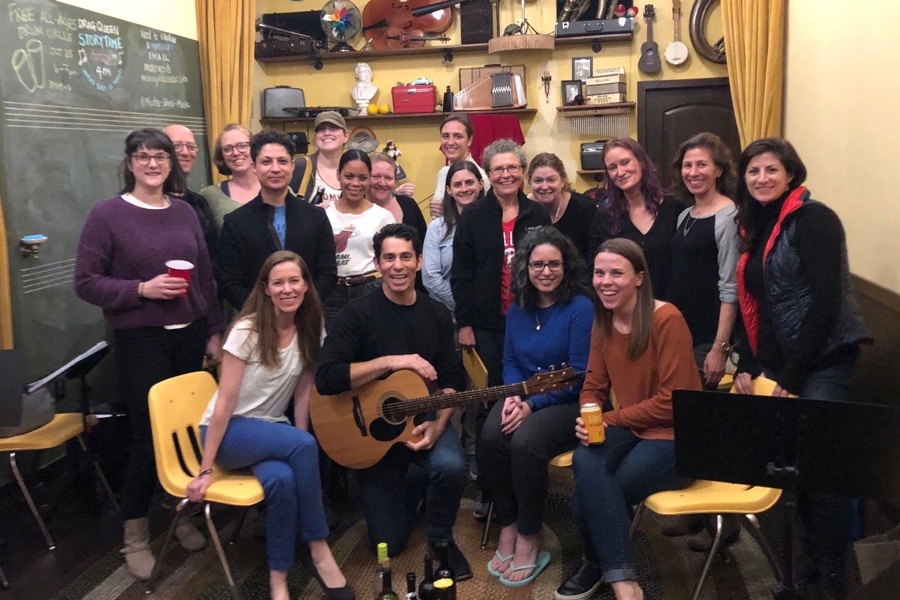 The classes at Mister John’s have coalesced into something with its own life force. For instance: Francisco doesn’t teach a handbell class, but that didn’t stop choir and guitar students from forming a makeshift bell choir. At open mic night the group almost couldn’t play, but at the eleventh hour, the last member hustled through the door. A clumsy rendition of “Carol of the Bells” followed suit, with each musician wearing a focused face and often breaking into an impossibly wide smile.

“I think music does two things,” says Francisco “…[It has] us express ourselves in ways that we can’t always do so in words, and [it brings] us together as a community.”

Yes, Mister John’s Music exists to teach Philadelphians how to play instruments. But it’s also here to be a hub for new friendships. It’s here to give adults, trapped in a demanding adult world, something joyful to be a part of and a place to celebrate imperfection and do something healthy for themselves. It’s here to give them voice in a society where everyone is shouting over one another.

During that same December night, Joshua, the quiet piano student, stepped up to the makeshift stage amid a din of laughter and conversation. It was his second time performing that night, and he was still nervous. He cleared his throat and struck a few keys. The joking stopped, the laughter hushed, and everyone turned to listen.

Mister John’s Music is located at 904 S 9th Street. Adult music courses are $200 for 8-week sessions. Open mic nights are open to all for a small donation. Other local music classes for adults range from Temple’s Boyer College to New Jersey School of Music to School of Rock Philadelphia to Philly Music Lessons.