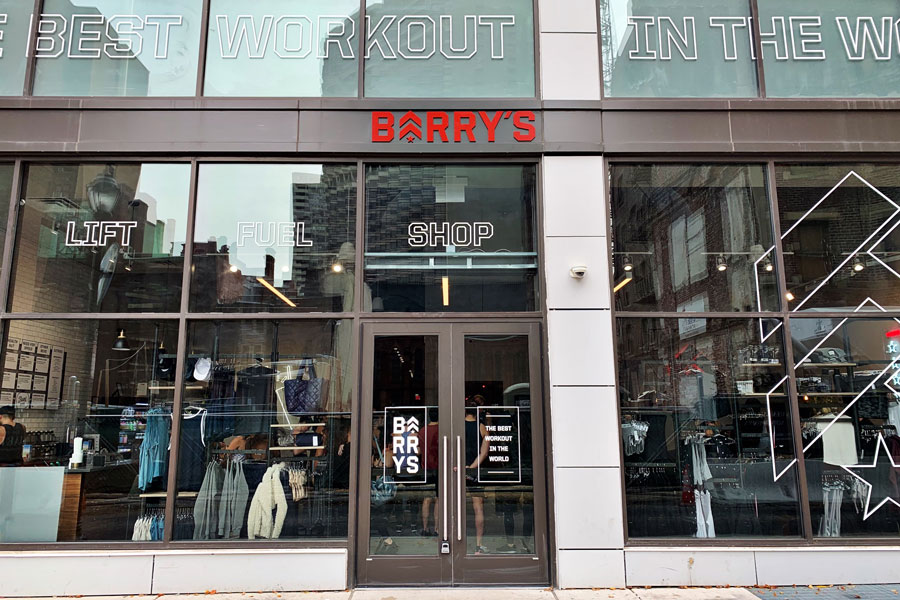 Not sure what to expect at your first class? Read this Barry’s Bootcamp Philadelphia review before you go. Photograph by Caroline Cunningham

Well, folks, it’s finally here. After months of rumors and anticipation, Barry’s Bootcamp finally opened in Rittenhouse on November 16th. And while I know many of us have been eagerly awaiting the day, I’d like to contend that I have been just a little more eager than the rest of you, no offense. Given my current treadmill class addiction, I was pumped to finally step foot inside Barry’s famous Red Room.

Haven’t been yet yourself? Keep reading to learn what to expect at your first class. 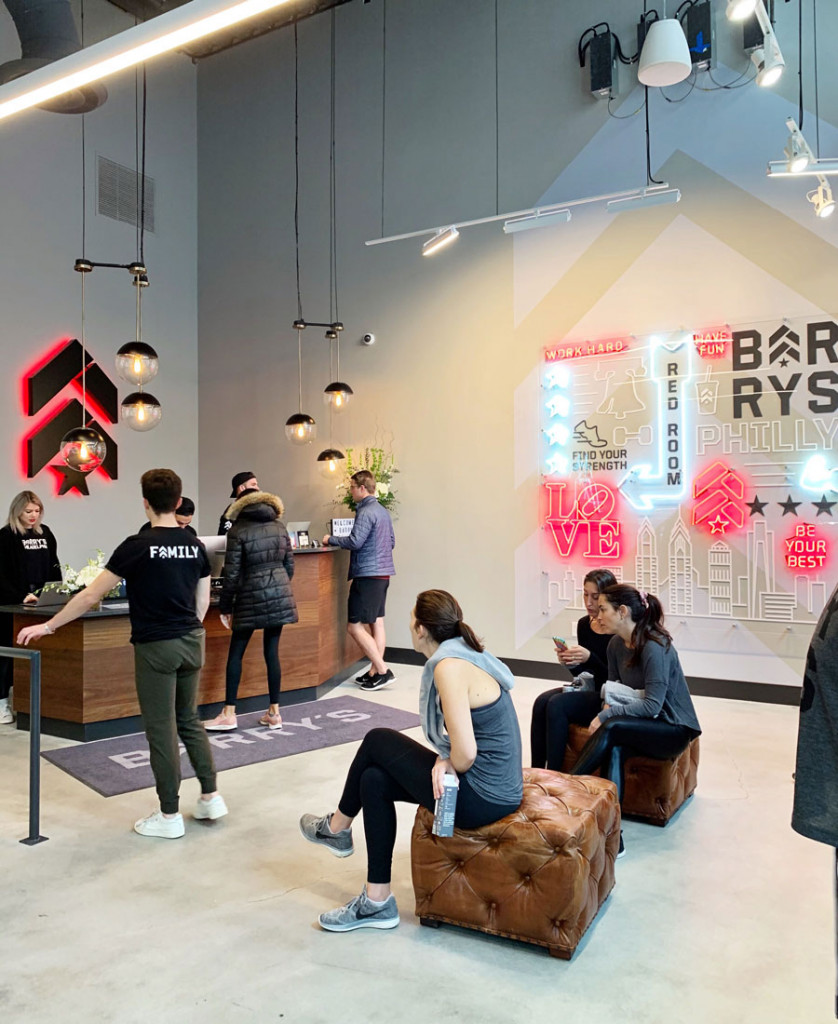 The front desk, outside the Red Room. Photograph by Caroline Cunningham

I’d like to begin by saying that the new Barry’s Bootcamp Philadelphia is BIG. You know that thing where you show up for your boutique studio class, only to find yourself crammed into a tiny lobby with 100 people — half of which are trying to grab their stuff and leave, the other half of which are trying to stow their stuff and get to class? The lobby madness isn’t nearly so claustrophobic at Barry’s, where soaring ceilings and a wide-open entry space by the front desk leave plenty of room to mingle. 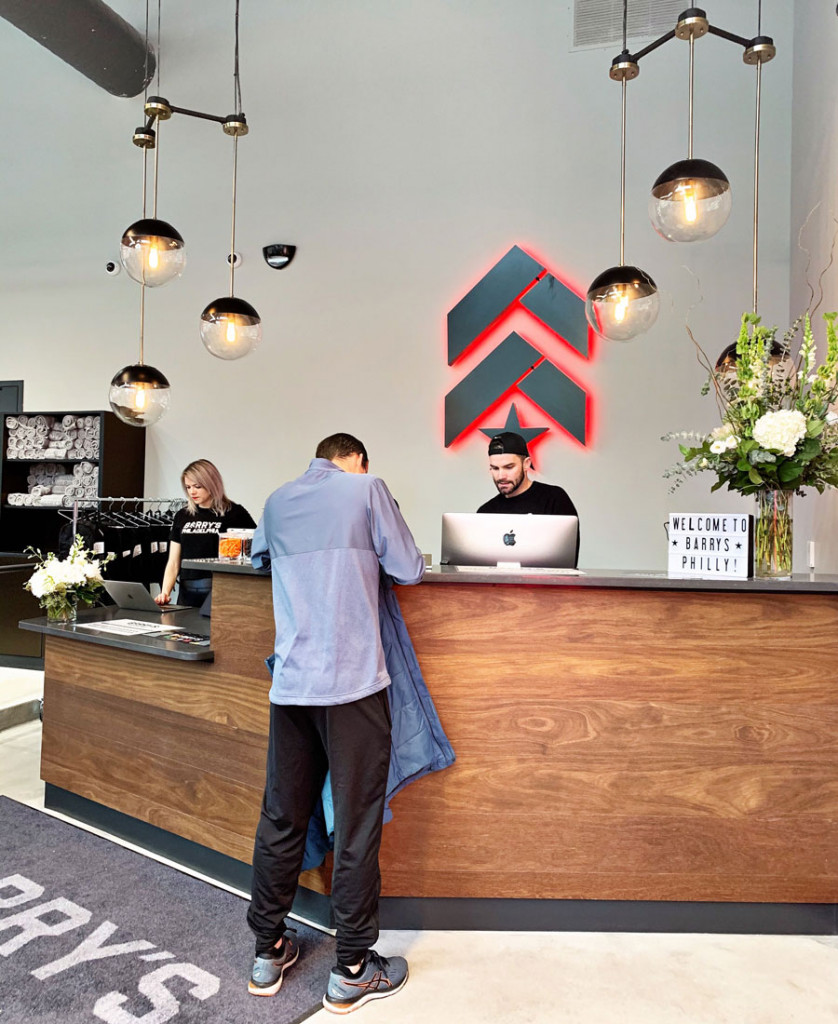 Upon arriving, you’ll of course check into class at the front desk, learn what treadmill or floor station you’re starting at, then head down the hallway intersecting the middle of the room to the locker rooms. There, you’ll find showers, towels, plus some swanky amenities like Oribe products and Dyson hair dryers. 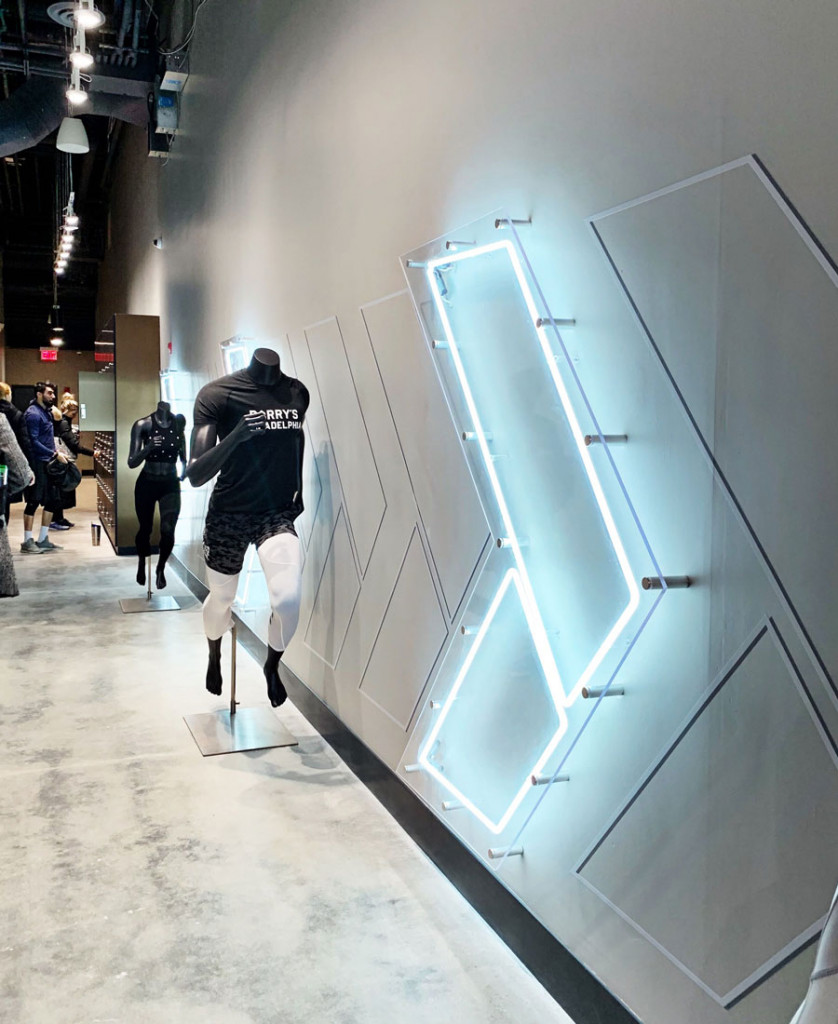 The hallway to the locker rooms. Photograph by Caroline Cunningham 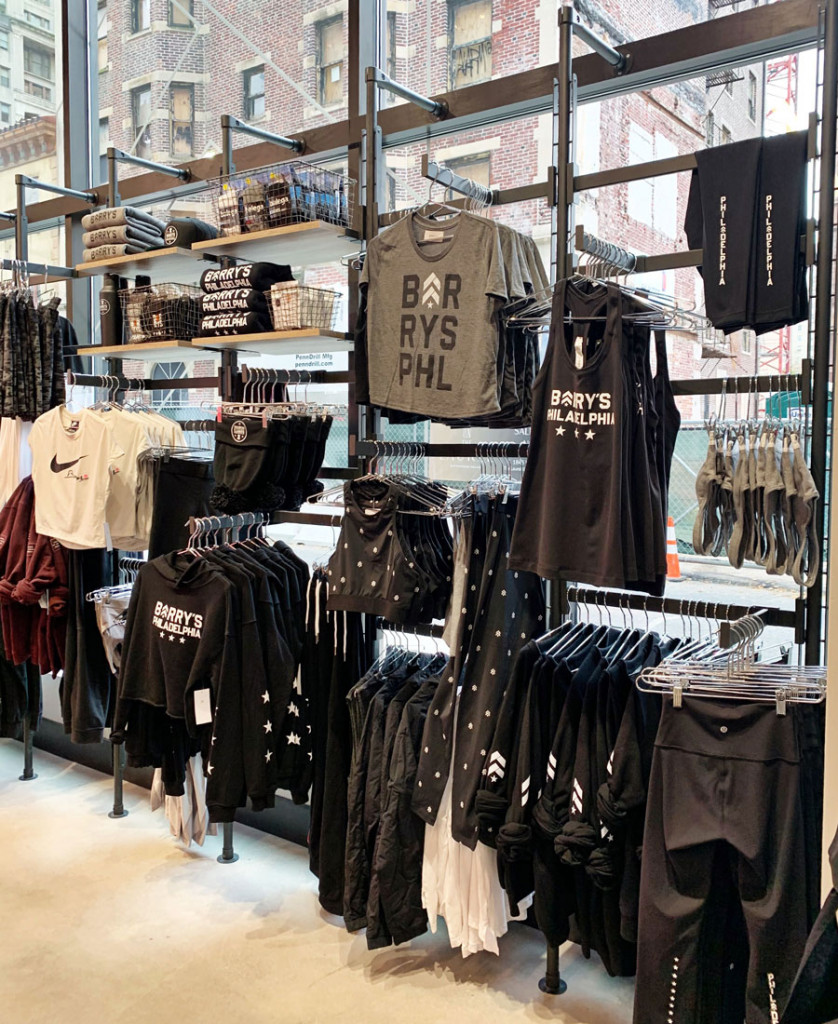 You can also spend time before class browsing the ample merch section with all the Barry’s-emblazoned leggings, tanks, bras, water bottles, and more you could possible desire. 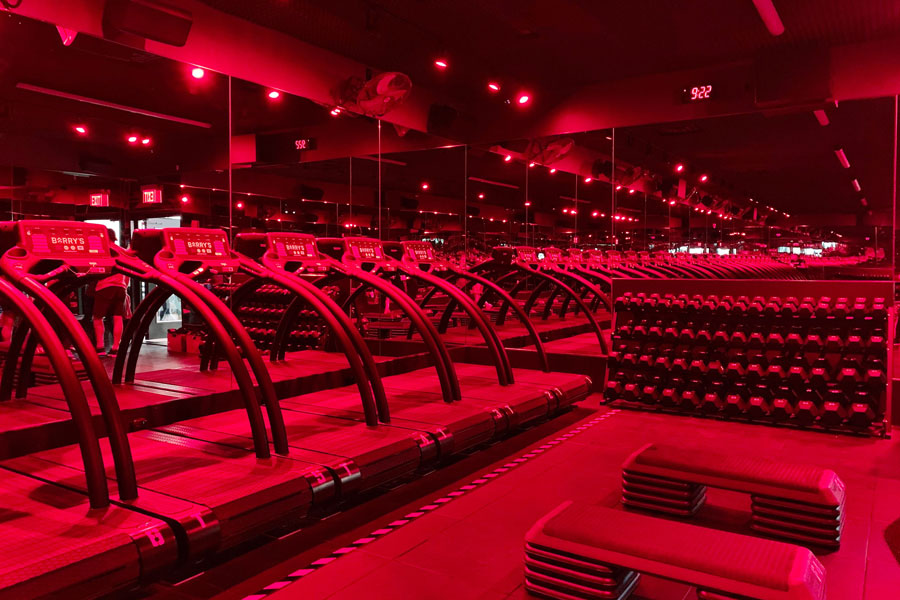 Inside the Red Room. Photograph by Caroline Cunningham

Ah, now for the fun part: the workout in the Red Room. You’ll either start on one of the Woodway treadmills lined along the long end of the room, or you’ll start on the floor next to a weight bench. On the floor, depending on what exercises are on deck, the instructor will tell you to collect certain equipment from the ends of the room, such as dumbbells, resistance bands, or mats.

The class is structured in four parts so that you swap between the treads and the floors every ten to twelve minutes, hitting both areas twice. On the floor, you’ll work through a series of strength-building exercises, everything from planks to chest presses to tricep dips to lunges — hitting all the major muscle groups. The exercises are tough — so tough, you’ll be grateful when it’s time to switch to the treadmills. 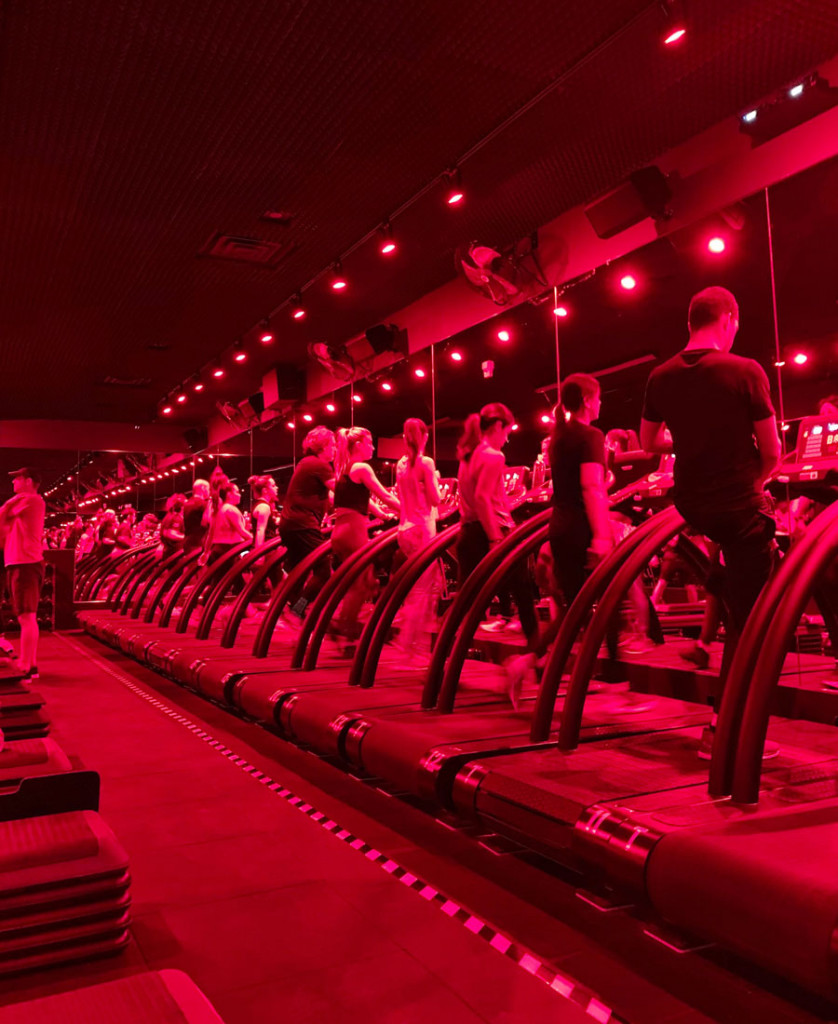 A row of Woodway treadmills inside the Red Room. Photograph by Caroline Cunningham

Meanwhile, on the treads, you’ll use the Woodway machines’ “instant speed” feature (meaning, you hit a number and it immediately jumps the belt to that MPH, rather than having to inch up the speed with an arrow button) to switch between a light jog, a run, a sprint, and back to a recovery pace. For example: In the class I tried, we ran for two minutes, then switched to a sprint for one minute, then recovered for 90 seconds. After, we repeated that same series of speeds — only this time we sprinted for just 45 seconds.

You may also play with the incline during the treadmill portion of the class — starting at a higher incline through one round of run-sprint-recover, and lowering the incline with each following iteration.

By the time the 50-minute class is through, you’ll have gotten in a good dose of cardio, some serious strength training, and you’ll be ready for one heck of a nap. 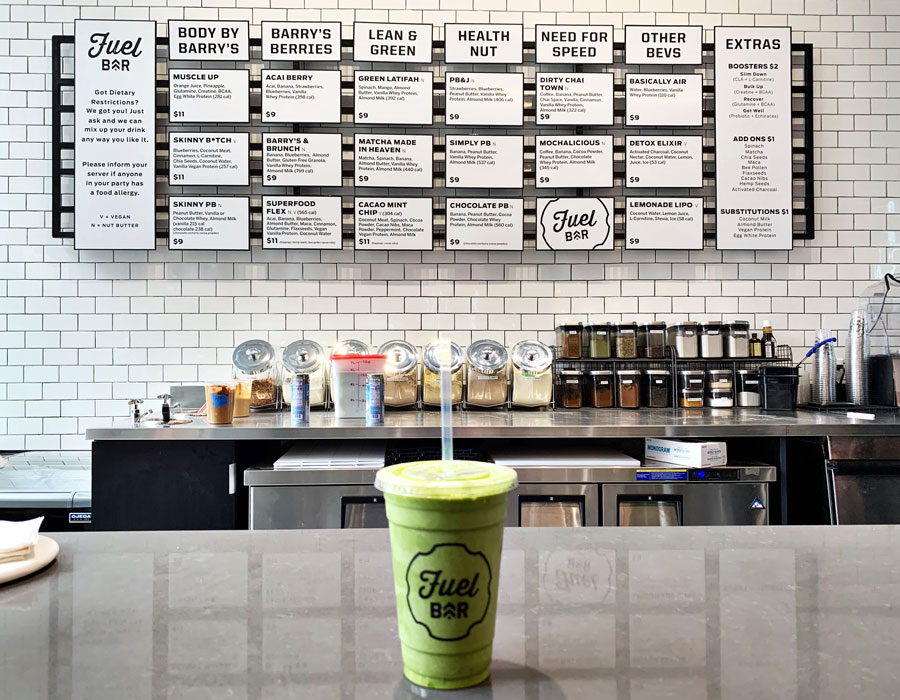 But wait, there’s more! Barry’s Bootcamp Philadelphia also has a full-blown smoothie cafe located in the lobby. Here, you can order off of the long list of drinks — all fully customizable — before class, and then find your drink waiting for you after you’re through the workout. I tried the “Green Latifah” and I have to say, it’s one of the better smoothies I’ve tried (it still had that protein powder flavor, but what are you going to do?). In fact, even if I wasn’t in the neighborhood for a workout, I’d stop by just for a smoothie — it was that good. 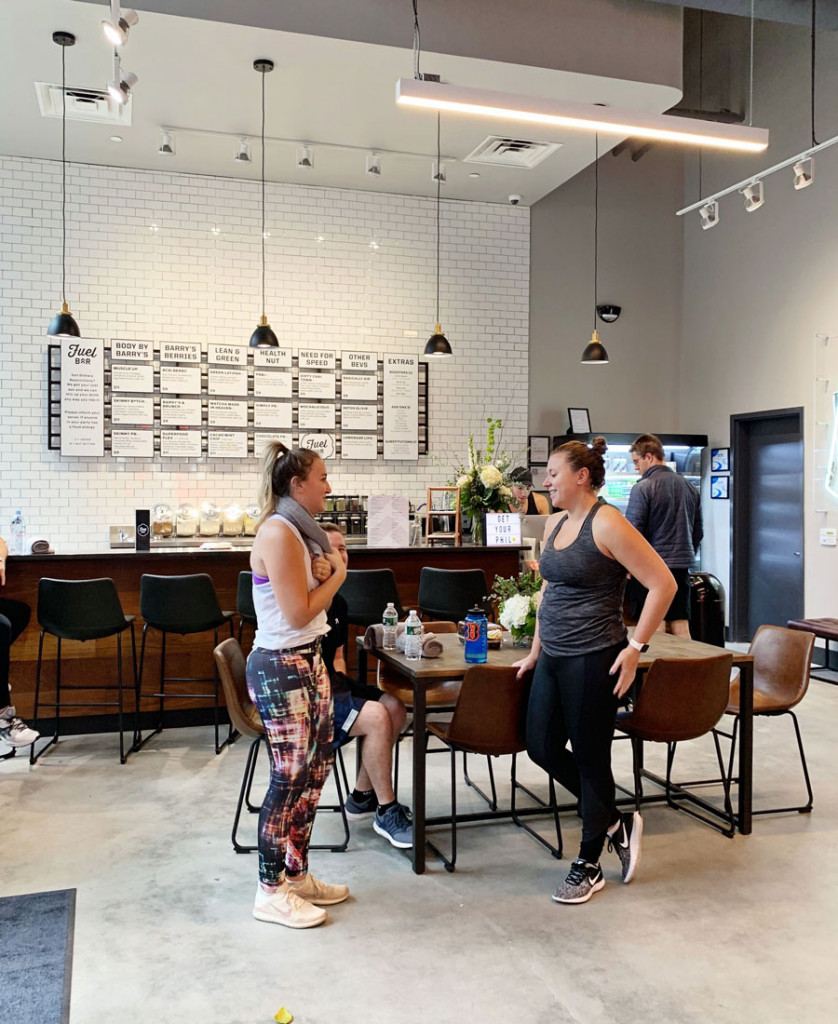 Ready to experience Barry’s Bootcamp Philadelphia for yourself? Head over to the website to book your class ($30 for a single booking), then go visit at 1911 Sansom Street, Rittenhouse.