Philly's newest co-op is still working out some kinks, but there's already plenty to like. 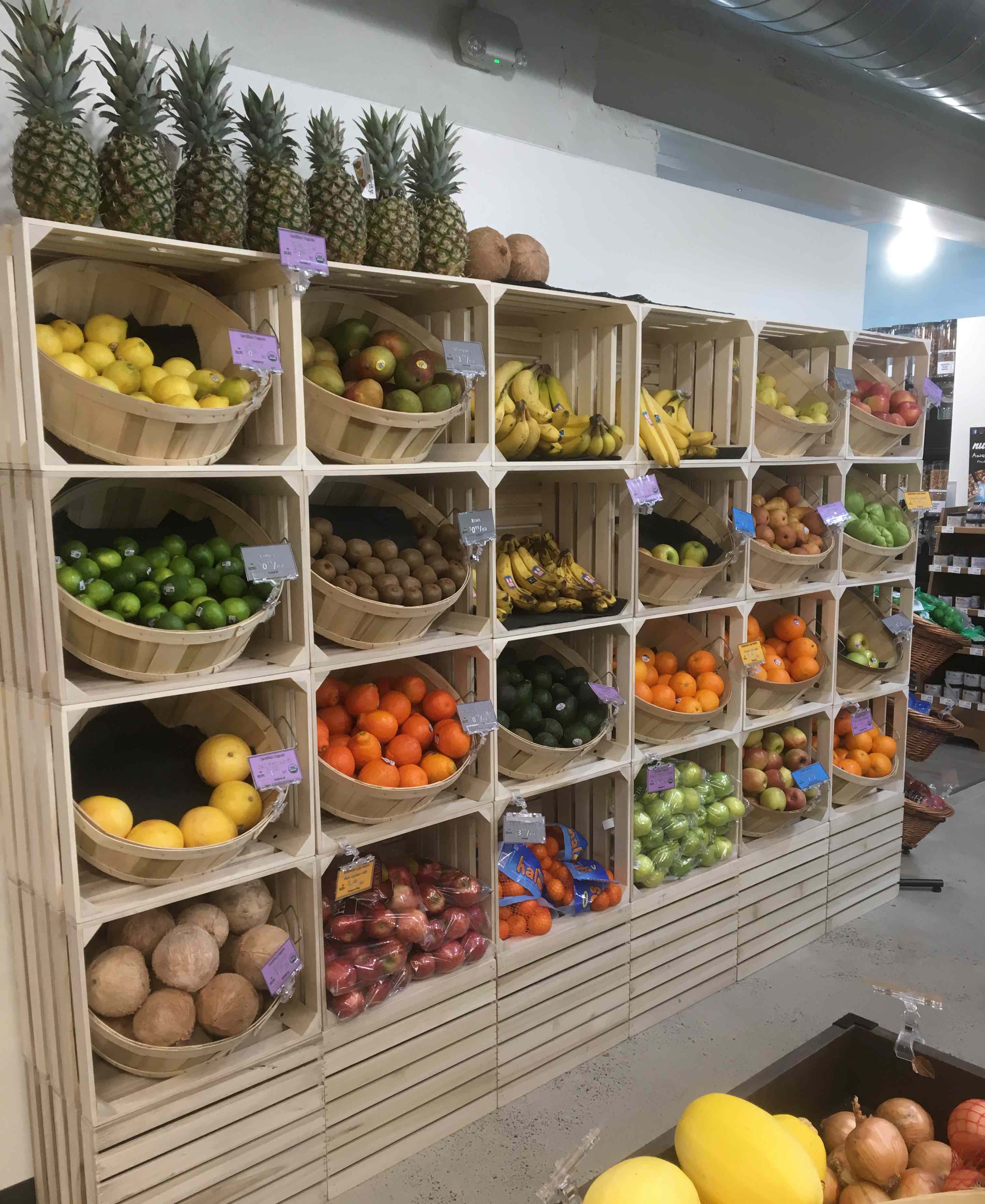 New businesses rarely launch on time. When they post opening dates on Facebook and Instagram, we mentally add four to six months on to figure out when they might actually be up and operating. Sometimes it takes even longer than that — and the delay (nearly) always has something to do with construction.

For Kensington Community Food Co-op (KCFC), though, it was more than that. Although contractor issues did set the store back more than a year, funding was the larger concern. Ultimately, it took 11 years and approximately $2 million — with more than $400,000 raised over just the last two years — to get the grocery functioning. “Because this thing has dragged on for so long, you’re never quite sure if people are going to be excited about this or frustrated because it’s taken so long,” says general manager Mike Richards. “It’s been a lot of overwhelming support, and people are excited for it to actually open.”

And, on April 24th, it finally did, at 2670 Coral Street on the edge of East Kensington. With less than a week of business clocked so far, KCFC is still rolling out some of its features. The health and wellness products section, for instance, is currently bare, and hot coffee options aren’t yet available in the café space. In fact, the grand opening celebration hasn’t even happened; mark your calendars for the event on May 4th and 5th. But we thought we’d take a look around and see what there is to already like. 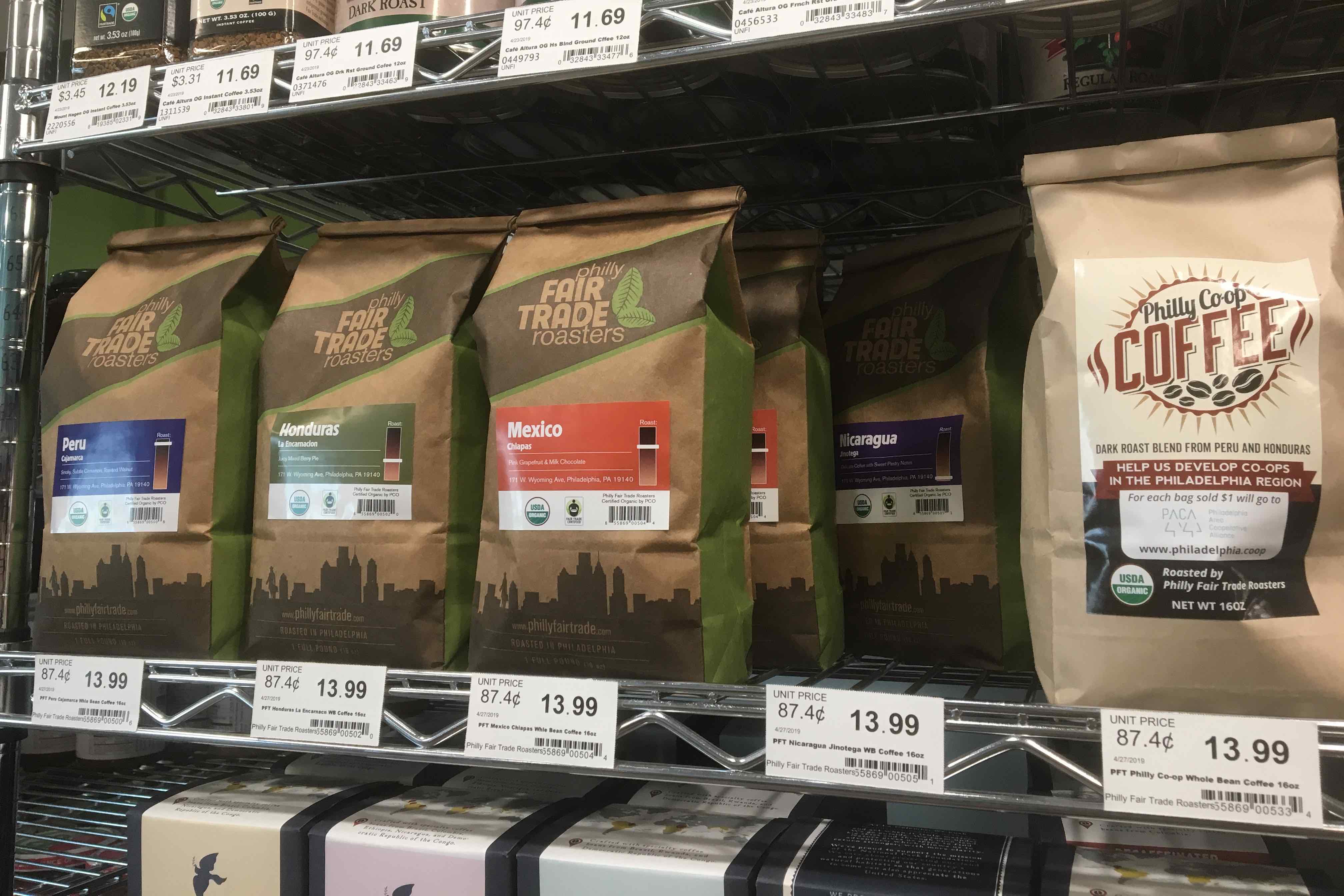 The emphasis on Philly-area producers is clear, especially in the coffee section, which boasts the local heavy hitter, La Colombe, as well as smaller brands like Philly Fair Trade Roasters (PFTR) and even a collab blend between PFTR and several other regional co-ops, including Weavers Way. 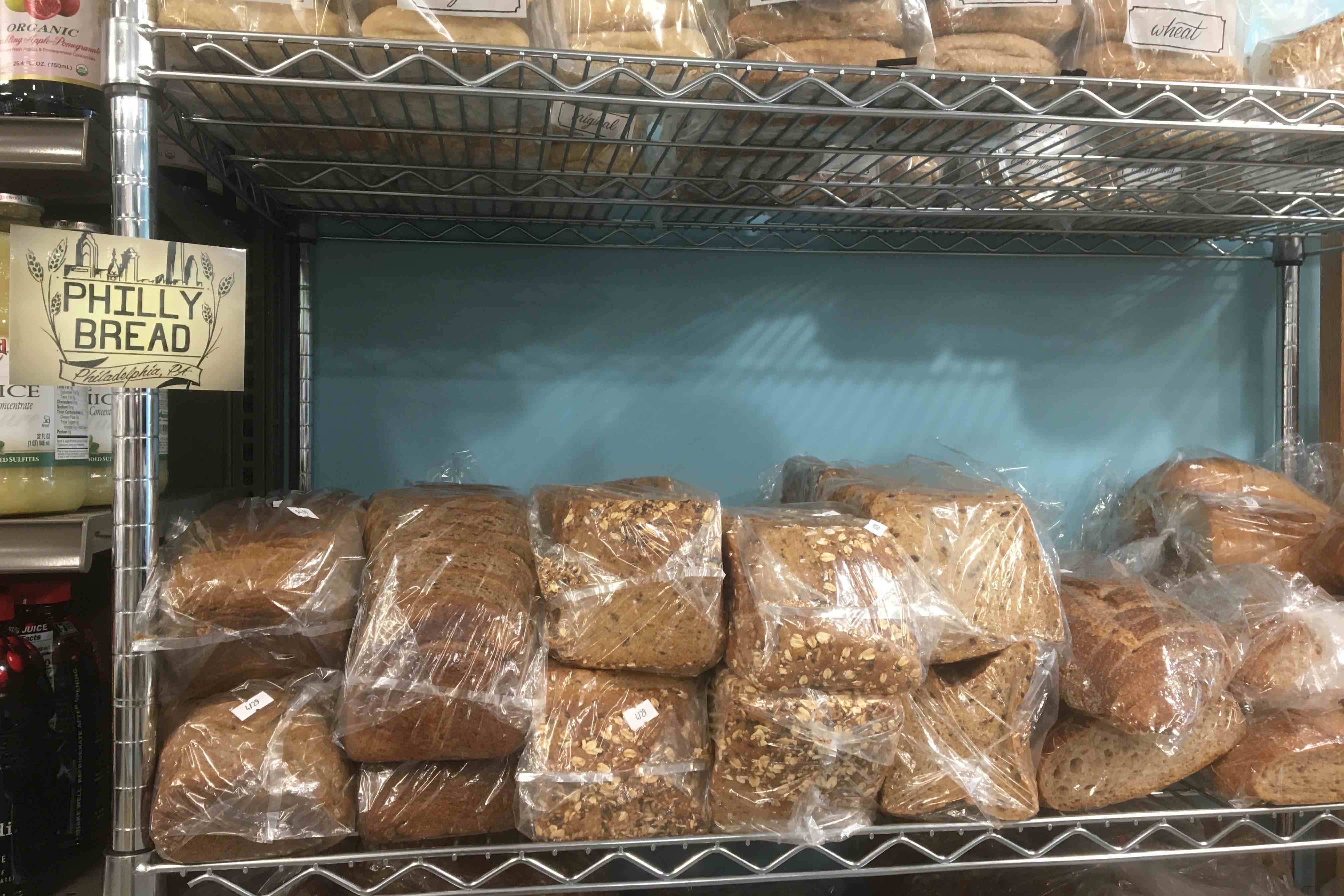 The selection isn’t huge — it’s mostly dominated by Philly Bread and Metropolitan Bakery — but what we liked were the prices. They vary depending on whether you’re buying multigrain or a baguette, but we were happy with paying $4 for our artisanal loaf. 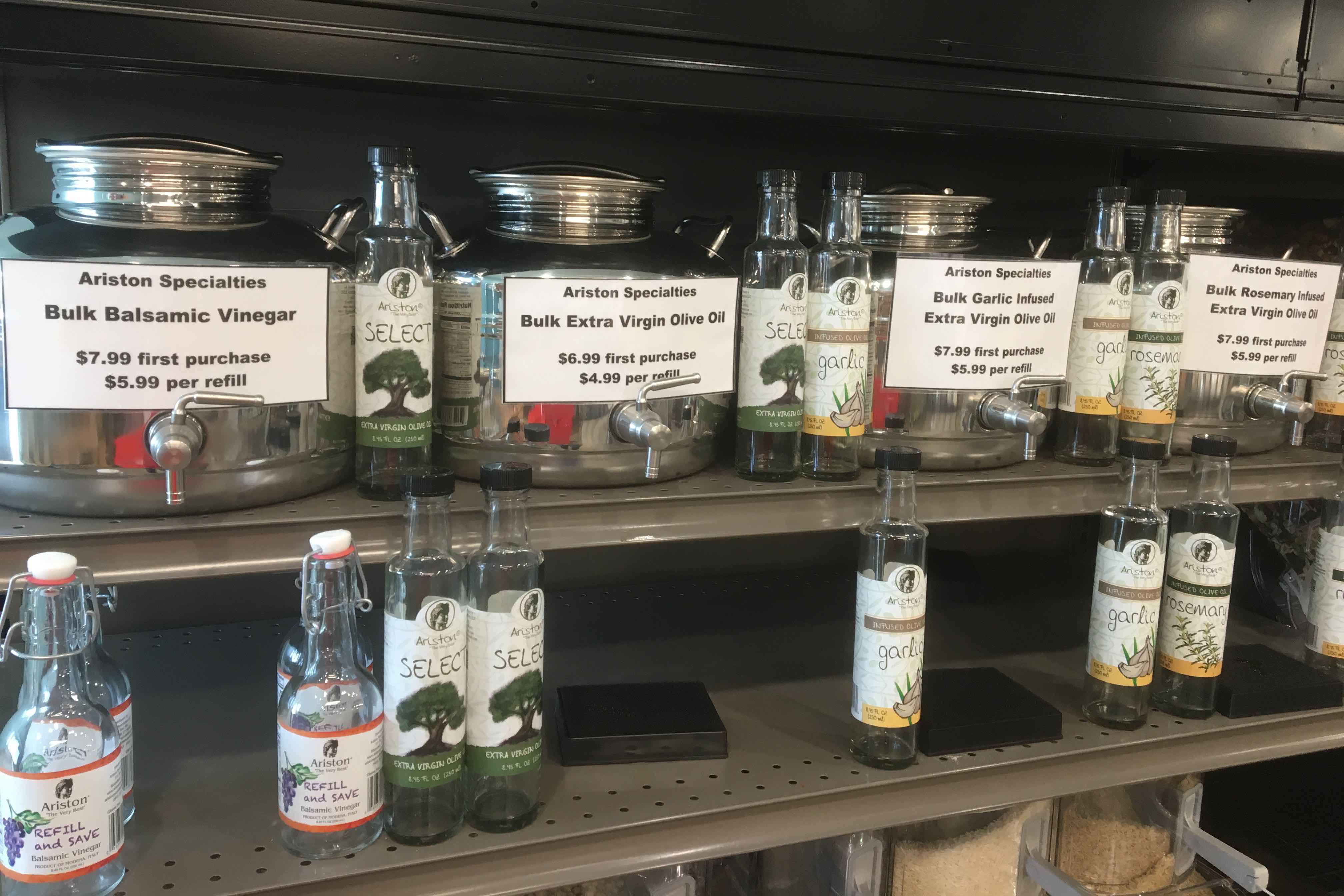 We remember the days when we used to make fun of the grind-your-own nut butter options at Whole Foods Market. Guess we have to eat our words because we are super into KCFC’s balsamic vinegar and olive oil station. You can purchase an empty bottle and fill it up with balsamic vinegar, olive oil, garlic-infused olive oil, or rosemary-infused olive oil from Greece-based Ariston Specialties. When you’re out of the staple, you can come back and fill up the bottle again. (Yay, sustainability!) 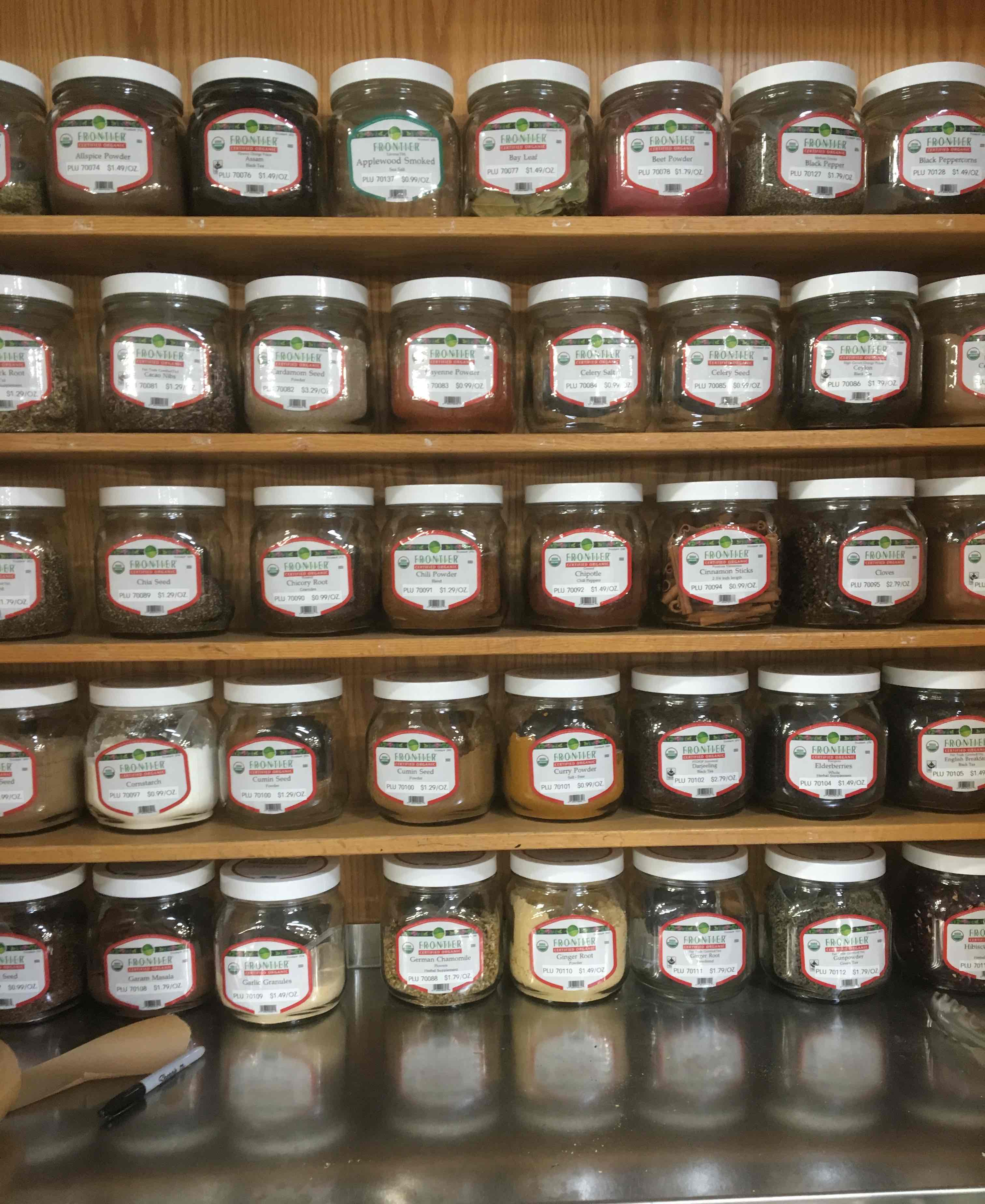 Bulk spices are displayed prominently at the front of KCFC. / Photograph by Mary Clare Fischer

You can find everything from pepper to cardamom in bulk in most large grocery stores, but they’re typically buried in the back or located next to the more convenient, pre-packaged spices (a shame since bulk spices tend to be cheaper, especially if you go the organic route). Instead, KCFC displays its Frontier Co-op bulk spices prominently at the front of the store while you have to go searching for jars of basil and thyme. And, because they’re located next to the produce, it makes it easier to think about which herbs you might want to add to a particular veggie-based side dish. 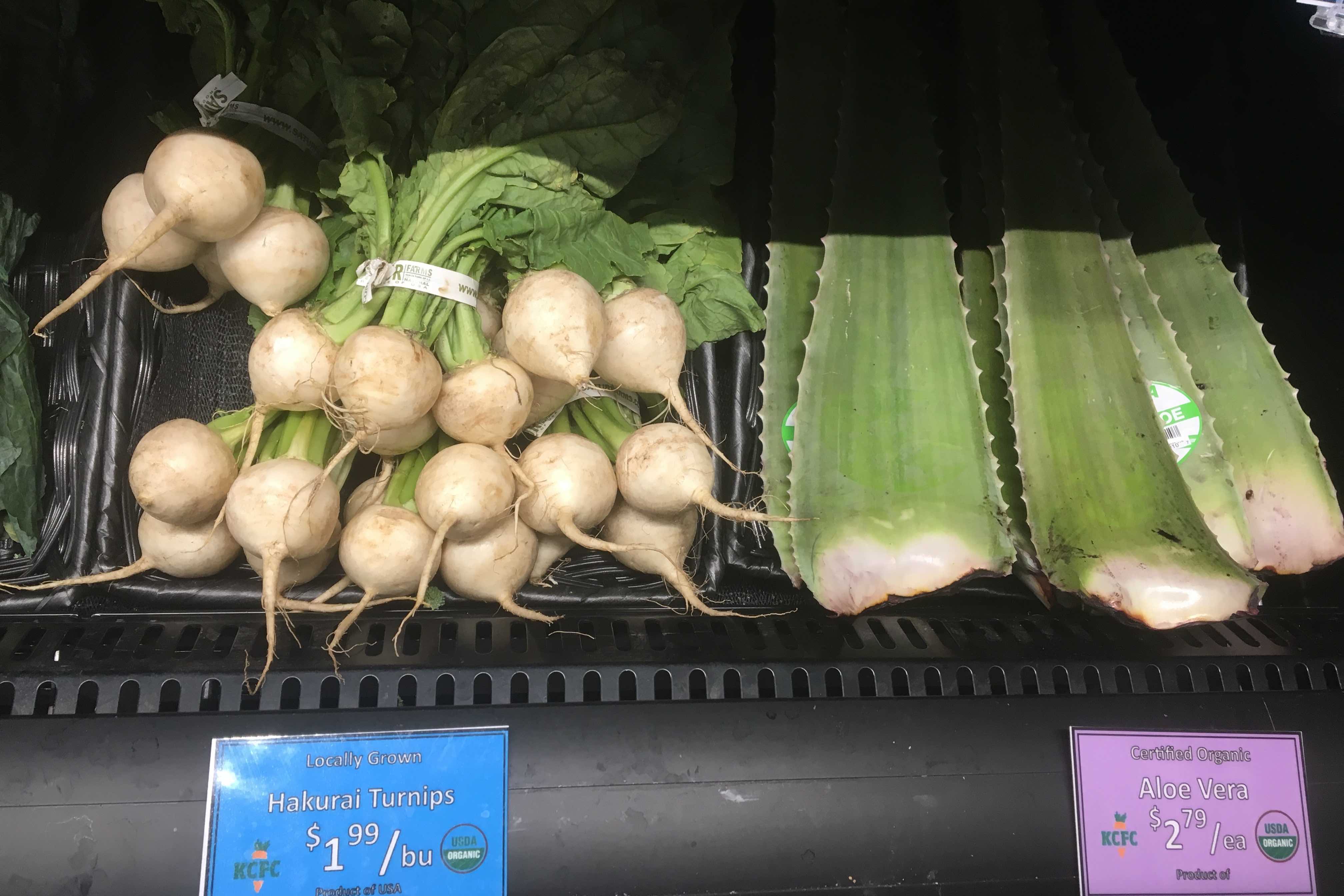 Of course KCFC stocks your standard oranges, bananas, and apples. But the store also features a few unexpected items (think: whole coconuts, chayote squash, and aloe vera stalks). These products can be intimidating to cook with, so we’re eager for the co-op’s food education program to get going. Regardless, it’s nice to see some diversity in the produce section. 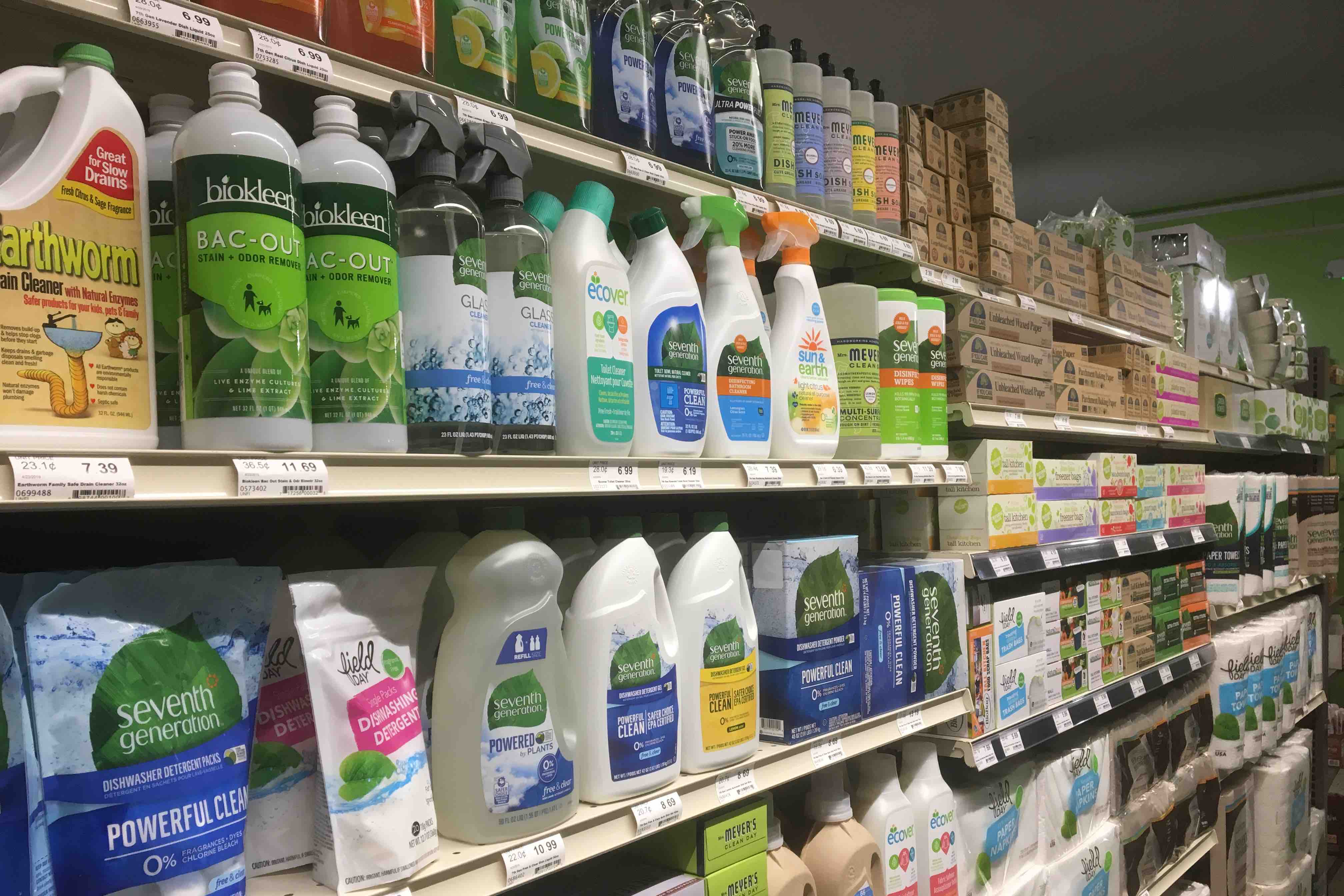 A theory: If you’re shopping natural foods, you’re more likely to shop natural cleaning supplies (since you understand that how you surround yourself is just as important as what you put in your body). That’s what KCFC is betting on, with a whole aisle of eco-friendly products, including well-known brands such as Mrs. Meyer’s Clean Day and Seventh Generation, to keep your kitchen, bathroom, and family clean.

The Café and Bar 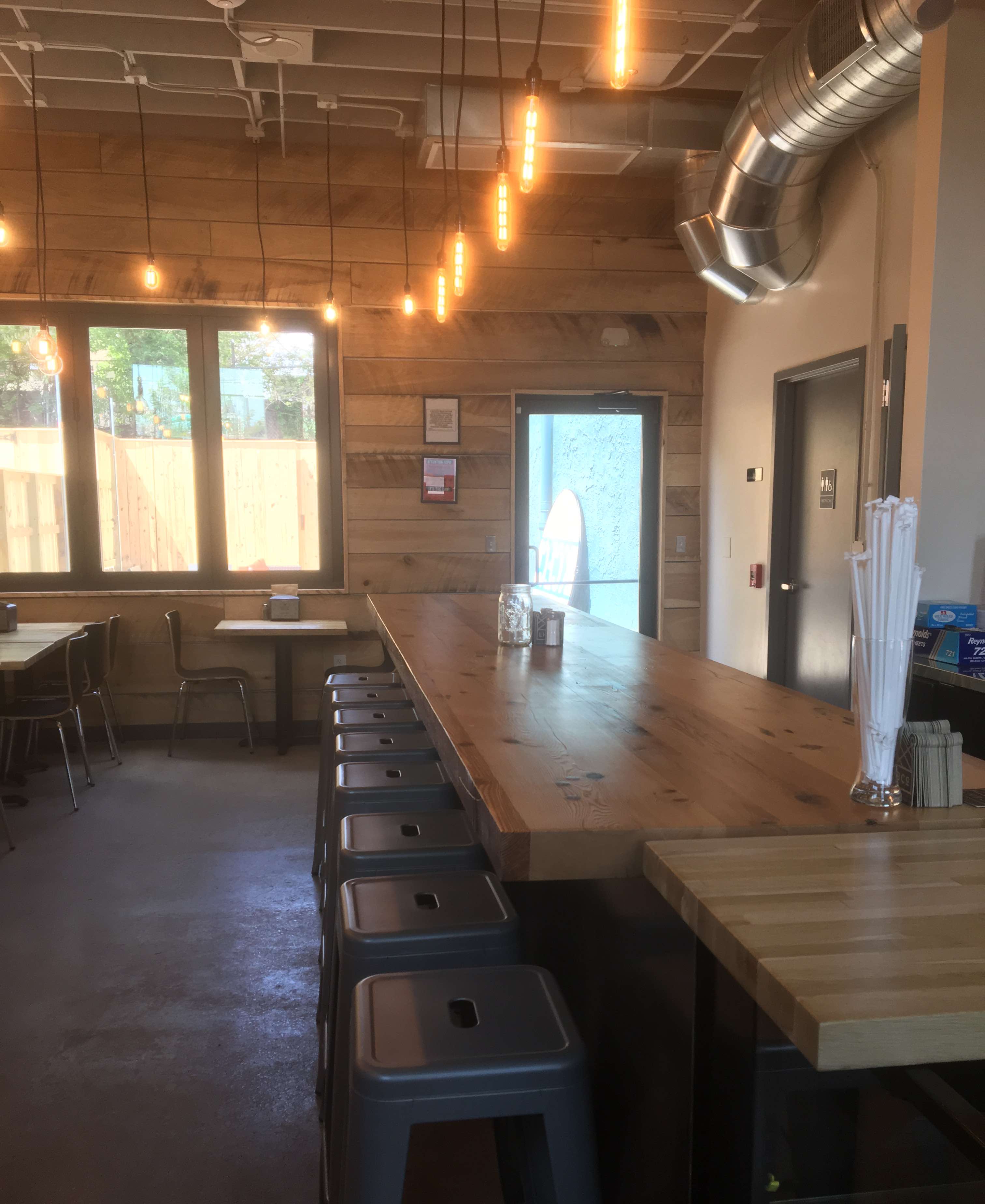 KCFC includes a café and a bar with a full liquor license. / Photograph by Mary Clare Fischer

More and more, grocery stores are recognizing the potential to serve as community spaces where people can hang out instead of pass through. KCFC’s gleaming café and bar illustrates those possibilities. While it’s not actually serving hot coffee yet, it does have cold La Colombe draft lattes, grab-and-go burritos, and eight beers and ciders on tap, including a rosé cider we can’t wait to sip on in the summer months.