V Marks the Shop launched softly in December, but it'll be hosting a grand opening party on Saturday. 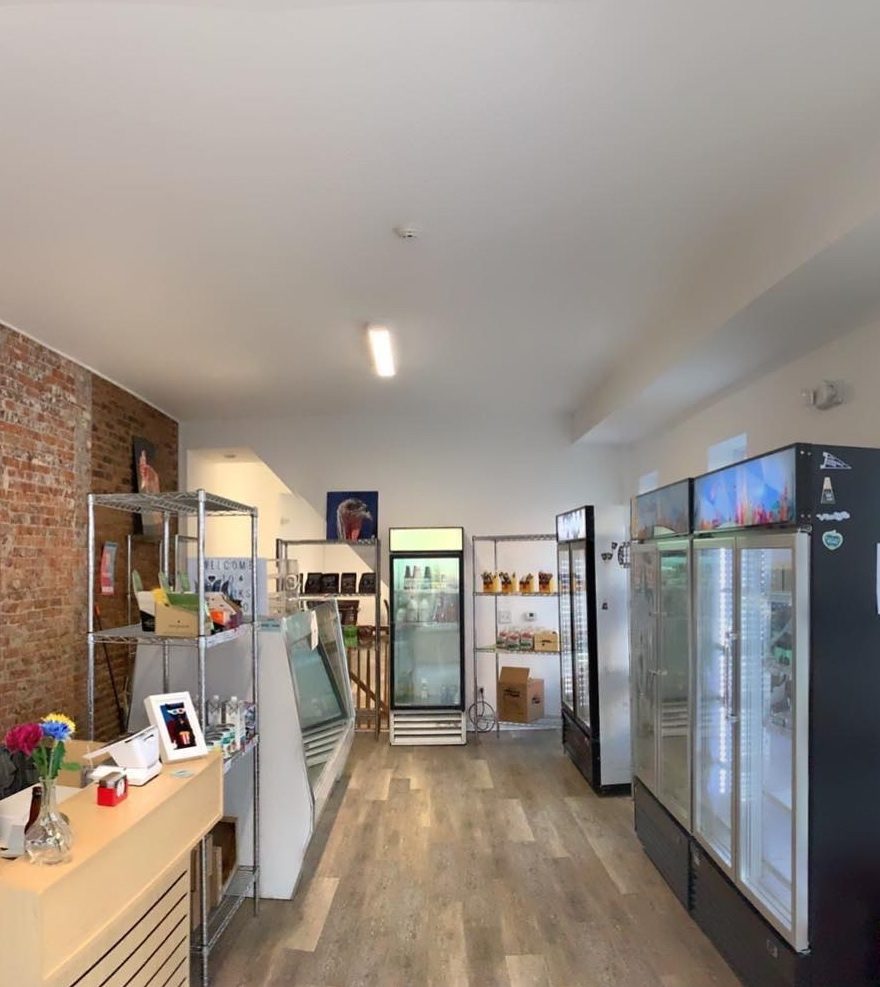 We keep saying Philly is having a vegan moment. But, at this point, it’s actually more of a movement. Just look at the facts. Vegan Restaurant Week is expanding this year. The fast-casual plant-based chain Greens and Grains recently opened in the Comcast Center (and its grain bowls are so tangy and creamy and savory we couldn’t believe it). And, perhaps the most shocking development: South Philly now has a vegan convenience store.

V Marks the Shop opened softly in December, expanded its hours in mid-March, and will host a grand opening party this Saturday. Helmed by Carmella Lanni and Carlo Giardina, the team behind the vegan marketplace Philly Vegan Pop Flea, the small shop carries animal-free varieties of “steak, ribs, fish filets, cheese, milk, condiments, on and on and on.” “We try to get a vegan version for everything that’s not vegan,” Giardina says. “It’s not easy.”

“We would love to be 50 percent local goods and 50 percent national/international,” Giardina says. “We’re getting there.” Brands from elsewhere have been just as popular, though. Bestsellers include vegan dog food out of California’s Wild Earth, vegan smoked salmon from fellow Cali business Sophie’s Kitchen, French macarons from New York City–based Sweet Maresa’s, and smoked drumsticks from Taiwan company All Vegetarian.

The customers at V Marks the Shop are just as diverse as the products. “We come from more of an online world, so I had some certain expectations,” Lanni says. “I was thinking female millennial would be the core customer, but I’m seeing a huge variety in the store. I think in terms of sex and gender, it’s been almost 50-50. And I think we’re near 50 percent not vegan; we’re getting a lot of people who are saying, ‘I’m not vegan, but my partner is,’ or ‘I’m not vegan, but I live in the neighborhood and want to support a local business.’”

That’s probably because Lanni and Giardina were thoughtful about the store’s launch. The pair had kicked off their vegan careers as food bloggers in the Bronx, eventually selling vegan items online and hosting pop-ups in the New York area. They’d always wanted to open their own brick-and-mortar and had Philly penciled in as a vegan-friendly city that happened to be a great place to live. (Aw, shucks.) “But we didn’t want to show up in Philly as strangers and have people be like, ‘Who are these two opening up a store?’” Lanni says. “We wanted to meet the community.”

And that’s exactly what they did. In May 2016, Lanni and Giardina hosted a vegan mac and cheese competition and then debuted Philly Vegan Pop Flea, which is exactly what it sounds like: a vegan flea market that rotates between different locations on a monthly basis. “The point of the Flea was twofold: to connect with other businesses and put our name out to the public,” Lanni says. “It helped us build a following at the same time it helped us build a community of vendors.”

You can meet some of those local vendors — and, of course, check out V Marks the Shop — on Saturday at the grand opening from 10 a.m. to 4 p.m. Alice Leung of Northern Liberties’ Soy Cafe will be on site with waffle dots (these look like polka-dotted waffles), and West Chester–based Lokal Artisan Foods is handing out vegan French toast bites featuring its signature French toast seasoning. (We haven’t tried this yet, but can we just say YUM.)

The DJ Flufftronix will be spinning tunes from noon to 3 p.m., and you can buy raffle tickets for a gift basket of Lanni and Giardina’s favorite products. Proceeds benefit the Pennsylvania–based Indraloka Animal Sanctuary, which is currently fundraising to build a new, state-of-the-art space. More than one way to support the earth’s creatures and critters? We’re here for it.