American Ninja Warrior contestant Najee Richardson — a.k.a. The Flying Phoenix — on training in Philadelphia, pre-show nerves, and what he eats on competition day. 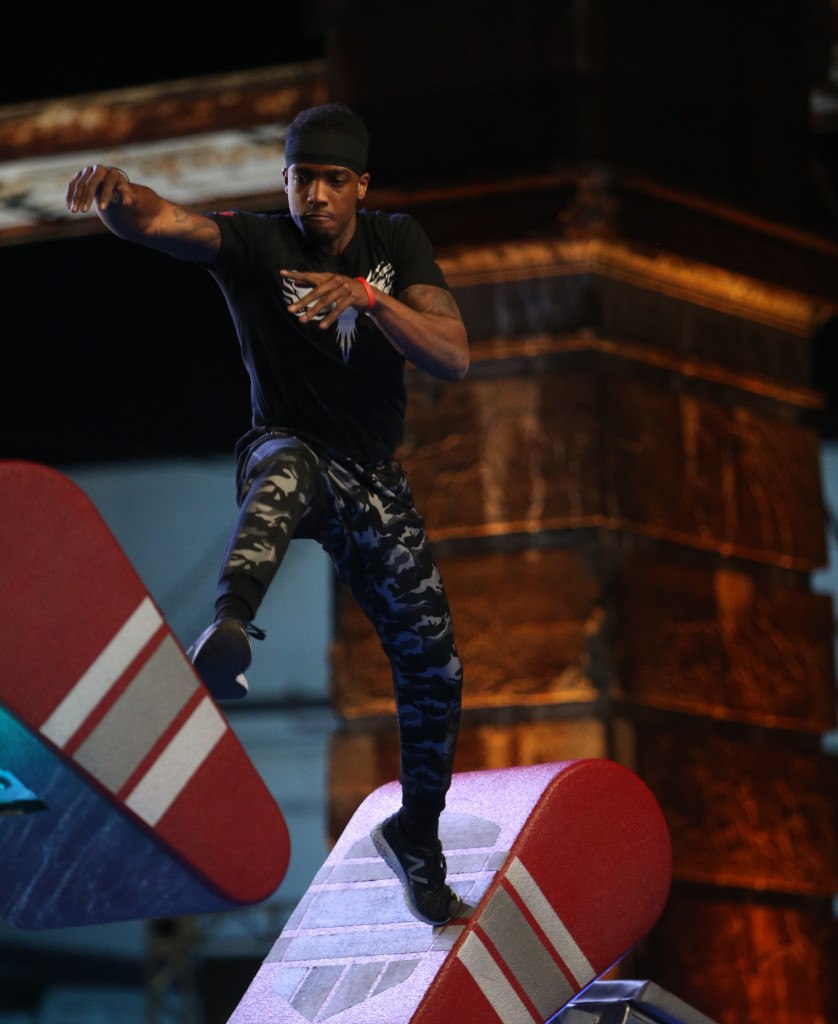 Najee Richardson during the Philadelphia qualifiers. Photograph by Bill McCay/NBC

If you’ve ever watched an episode of American Ninja Warrior, you’ve had the thought run through your head: Are these people even human?

We definitely have that feeling watching Najee Richardson, a North Philly native who goes by The Flying Phoenix. After a debut on Season 7 and making it to Stage 3 of American Ninja Warrior Season 9, he returned for the Season 10 Philadelphia city qualifiers, which aired on June 25. Not only did he manage to scale the “Mega Wall” — a new 18-foot warped wall that earns successful contestants $10,000 — but he did it with leg cramps.

Oh yeah, it’s impressive. I mean, just see for yourself:

Obviously, it takes a lot of strength, agility, and some serious gym time to make it through one of the ninja courses. To learn more about what it takes to be a ninja warrior, we gave Richardson a call and chatted with him about his training regimen, his childhood, and his thoughts on this current season of ANW.

BWP: Were you involved in any other sports growing up?

Richardson: When I was 10 years old, my parents put me in a little gymnastics gym in my neighborhood. And then Temple University started a junior olympics boys team and my parents involved me in that, and I competed from the age of 12 til I was 18 years old, so I was an elite level gymnast for a little over five years. It definitely built me a good foundation of agility-based skills and made me comfortable being in the air and throwing myself into positions and ways that other people really find a hard time doing on the show.

A lot’s changed since my time on the show and I’m so grateful for the exposure that I’ve gotten because it’s allowed me to do a lot of things that I really love. Now I’m able to really sustain myself and make a living just by being a ninja. I go to appearances, I go to other ninja gyms and I talk to kids, I’m doing motivational speaking now, so I’m going to inner-city schools and talking to kids about my time in the neighborhood that I grew up in, the kind of the struggles that I’ve had, and the success that I’ve had, how it’s helped me in my day-to-day life. I’m so involved in the sport now that I really just like to be at the top of my game, so I’m at the gym probably five days a week.

Ninja warrior is very upper-body dominant in terms of hanging. You’re doing a lot of big power moves, endurance moves, and just about everything you’re doing is hanging — hanging from your hands and your fingertips. So a typical ninja gym will have obstacles like the salmon ladder, the cliffhanger, a couple of lache obstacles where you’re throwing yourself from one bar to another bar — anything where you really just have to pull your body weight up using your arms. And then another thing that’s become very big in ninja gyms now are balance obstacles. It’s about how fast you can get across an obstacle that might move or something that’s super, super skinny.

In ninja warrior we have something called an all-hanging challenge, and basically what that is is you set up as many obstacles as you possible can and try to go through them all before touching the ground. I can get somewhere between eight to ten obstacles before I touch the ground. On the show, people get what’s called a flash pump, and that’s when your forearms or your arms fatigue very, very quickly because you didn’t properly warm up. Doing an all-hang challenge usually prevents that from happening; it gives you the endurance you need to be able to tackle that obstacle, so that’s something that I like to do for my training.

Is there anything that surprised you about ninja training that most people wouldn’t know?

Being a gymnast, I really kind of took for granted the fact that I was just strong enough to get through a lot of the obstacles. So something as simple as hanging from a bar and throwing myself to another bar — I thought that would be easy. But I guess the one thing that really surprised me was just how not easy it was. It took me a while to to get to the point that I am today. You can’t expect to just be dominant in one sport and to have that carry over to ninja. You really have to learn a lot of different disciplines if you want to have success in the sport.

How do you keep your cool during competition?

One of the biggest obstacles that I have to overcome on the show is my nerves. I get very nervous very easily. I think it’s the lights, the cameras, the crowd — it kind of takes my focus away a little bit. I like to say a prayer before I compete, but I also like to visualize every single thing that I’m about to do before I run. And then when I get up to the platform, right before I go, I like to pace back and forth. There’s something about continuing to move that keeps me calm. If I’m staying still in one spot, I start to freak out a little bit.

American Ninja Warrior competitions have brought you all over the country. How does competing in your hometown compare?

It was very different. It was actually a little bit more stressful because I had that added pressure of being the hometown kid and being kind of an influence in my community, and I just really didn’t want to let anyone down.

What do you eat before a competition?

One of my biggest things is not feeling too heavy before I compete, so I try to drink a lot of water and limit the amount of food that I take in about 24 hours before I compete. I’ll eat a couple of protein bars, I might eat a salad or something from Sweetgreen, anything just super light on my stomach so I can be as light as possible for the competition.

How are you feeling about your chances on American Ninja Warrior this season? What do you think will be your biggest challenge?

I feel that my chances for this season on American Ninja Warrior are very, very good. Last season there were only three athletes that made it to Stage 3 and two of the athletes, myself and Sean Bryan, both made it to the cliffhanger and fell. So I built a bit of confidence in realizing that I do have a talent for this. I think one of my biggest challenges is going to be my asthma. Last season at the end of Stage 2 I actually had a pretty mild asthma attack, so I think if there’s any obstacle that’s going to take me out it’s probably going to be my asthma.

What advice do you have for anyone who’s interested in starting ninja training?

If you are interested in starting ninja training, get out to a ninja gym. They are all over the country now. My very first ninja gym was about an hour and a half away from me, but it was one of the coolest experiences I’ve ever had. The second I got in there I was hooked. The drive is definitely worth it, the trip is definitely worth it. So for anyone who’s interested in participating in the sport, I would just say get to a ninja gym, just get out there and try it.