When you’re a woman in a white coat, it’s hard to know where to draw the line. 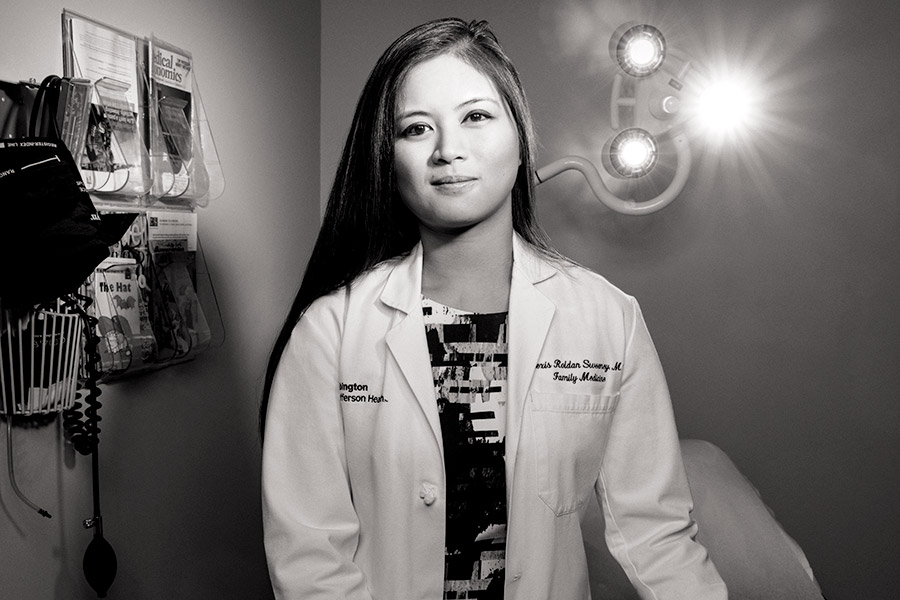 Late last year, the #MeToo campaign was all over the Internet as women across the country shared their stories of sexual harassment. It flooded social media, filled advertisements, and leaked into my personal email. It trickled into conversations with patients and co-workers and even invaded my Christmas dinner, when my aunts asked if I had any harassment stories from the hospital to share. I said no and quietly excused myself to the kids’ table.

Ultimately, #MeToo sits uncomfortably with me. Ending the silence about harassment is an admirable goal. But female physicians are required to honor the patient-provider relationship. If we stray from that and challenge a patient’s views or behaviors, we risk shattering that relationship. We must be more delicate than #MeToo allows, and oftentimes, we must be silent.

Mr. P. was a 67-year-old Italian male who flirted with all the women — nurses, therapists, doctors. He was good at it, too. He was in the hospital for a COPD exacerbation, on day two of IV steroids and antibiotics with a modest oxygen requirement. When I walked into his room at 7:30 a.m., he was sitting up in his chair and having breakfast.

“Good morning, sir,” I said, offering him a handshake.

He used the opportunity to pull me closer and kiss my fingers. “Ah, bellissima dottoressa, my lovely doctor, I am feeling better now! Please let me go home.” Between his words, he swept more kisses onto my hand. I wondered if he tasted the hand sanitizer that hadn’t evaporated yet.

“I don’t think we can do that,” I told him pleasantly. “You’re still on oxygen.”

“But for you, I will take off my oxygen.” He took off his nasal cannula and tossed it aside. “You see, I am fine.”

I watched his oxygen saturation slowly descend. “Let’s keep that on for now, Mr. P,” I said, reaching over him to grab the tubing along his bedside. As I did, his arm slipped up my white coat, and I felt his hand on my hip.

I drew back quickly, uncertain of how to respond. Was that meant to be sensual? Perhaps he wanted to make sure I didn’t fall as I leaned forward. Maybe he wanted to move my white coat away from his face. Maybe my clothing was falling into his breakfast. Sucking in a deep breath, I looked at him. He maintained his playful grin and asked, “Is everything okay, doctor?”

Mr. A., a 54-year-old male with hypertension and hyperlipidemia, sat on his bed when I arrived to discharge him after a chest pain rule-out. He had a rough chin and an oily face, and his breath smelled of cigarettes. His wife, docile, with short bobbed hair and round glasses, had a pen and a writing pad on which she took notes on his echocardiogram results, his diet changes, his follow-up appointment. We seemed to get along, and eventually I shook their hands and prepared to go. As I turned to walk out the door, Mr. A. called to me: “Hate to see you go, but I love to watch you leave!”

Did I hear him correctly? Would he say that in front of his wife? “Excuse me?” I asked as I spun around.

Mr. P. looked away, seeming to snicker. My skin tingled from his blatant rudeness. But my sentiments raged for his wife. What kind of man would disrespect his spouse so openly as she helped to organize his care?

I sought her gaze, hoping to indicate my condolences but also searching for some clarity, some ability to say, “I’m sorry you had to hear that.” She expressed no disdain, no fury, only acceptance, shaking her head and saying softly, “Don’t worry. Thank you, doctor.”

Mrs. R. was an 82-year-old woman with severe dementia who presented after a hip fracture. I brought my intern with me to assess her. When we arrived, the patient was sleeping, her mouth hanging open. Her daughter, maybe in her 60s, sat in the chair beside her, knitting a blanket. She stopped knitting when we walked in and exclaimed, “My, what a handsome pair you two make.”

“Oh … thank you,” I replied. A strange comment, but I hoped it was a compliment.

“How long have you two been married?” she asked.

My eyebrows rose. “We’re not a couple,” I said. “We’re the medical team that’s going to help take care of your mother.”

My intern pointed at me with his thumb: “She’s actually my upper-year.”

“I see,” the daughter nodded.

We examined Mrs. R. together. Afterward, I carefully described the plan to the daughter. I explained our goals for her mother while she was in the hospital, reviewed the surgery team’s notes, and discussed the need for rehab after her hospital stay. When I was done, the daughter pointed to my intern: “Thank you, but do you think the doctor could explain it again?”

“Ma’am, we’re both doctors,” he said nervously. “She’s the senior resident. She knows the plan better than I do.”

“I know, but you see, my mother is from a different time. Things were just … different then. I know she would understand better if it came from him.”

I looked at our patient, her mother, who was barely able to tell us her name. Then I glanced at my intern and patted him on the back. “I think you’ll be able to handle this from here.”

Outside my patients’ rooms, I’m often uncertain of how I’m supposed to feel. It seems logical to ignore these kinds of issues. The men and women I encounter are experiencing life-threatening crises. They’re sleepless and in pain, spending days away from the comforts of their families and homes. Challenging their social etiquette seems not only inappropriate but damaging to the therapeutic relationship between patient and provider.

And yet … I feel guilty in my silence. Do I have an obligation to speak up? If I stay quiet, am I condoning sexual harassment? Does my silence make me complicit by indicating that nothing is wrong?

The answer isn’t clear. It would be inappropriate for us to join the outcries of inequality, but also wrong for us to remain mute. How do we find a way to symphonize the tumultuous protests and the noiseless reticence of silence? How do we create a harmony that respects our patients but advances awareness of sexual harassment?

I struggled to answer these questions at Christmas as I dodged my aunts and headed for the kids’ table. My cousins, still in college or high school, were singing Taylor Swift songs and flipping through Time magazine’s article on 2017’s Person of the Year: “The Silence Breakers: The Voices that Launched a Movement.” Swift, along with Ashley Judd, Susan Fowler, Adama Iwu and Isabel Pascual, was on the cover. Those women had found their voices. Where was mine?

I contemplated a glass of wine. On one hand, I didn’t want to discuss my patients. A physician’s job is to care for patients, not condemn them, and I feared that my family, in an attempt to support me, would automatically vilify them. On the other hand, I didn’t want my family to condemn me for choosing silence over speaking up.

As I began to walk away, I heard a familiar voice: “Hey, Dr. Cousin!” It’s a nickname the kids have adopted for me.

“Yes?” I asked as I braced for a barrage of questions.

My cousin folded the magazine and neatly laid it on the table. “I can’t get an appointment with my doctor. Could you refill my Ritalin for me? Finals are coming.”

Alexis Sweeney is a mother, wife, and family medicine resident at Abington Hospital. She graduates residency this summer and will join a primary care practice in Bucks County.