Because everyone is in a rush in the morning. 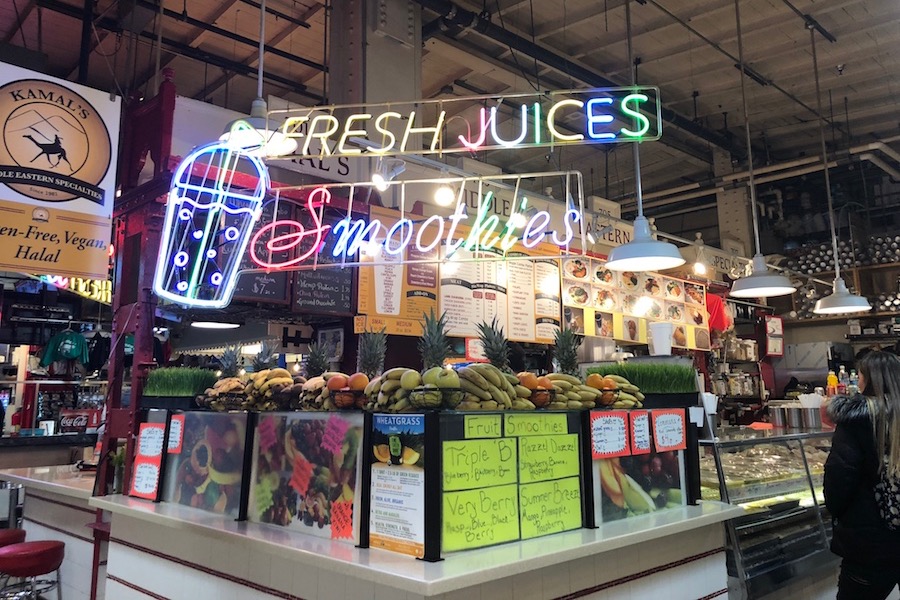 When you first decided to switch your eating habits to a vegan lifestyle, the idea of “grab-and-go” might seem like a thing of the past. When you used to be able to score a breakfast sandwich from any old cart slinging ’em on the street, you now have to be a little bit more thoughtful or strategic in where you can score an awesome vegan breakfast on the go, like when you’re heading from the train to work or from your morning workout to the office.

Related: Where to Find Matcha and Turmeric Golden Lattes in Philadelphia

But fret not my hungry vegans, there are plenty of Philly spots that serve up a hearty, healthy and vegan-friendly breakfast that you can literally grab and GO — many you can devour on your walk to work. Kick off your day with these ten accessible, delicious, and quick vegan breakfast items.

Where: Di Bruno Brothers; Rittenhouse (1730 Chestnut Street) and Washington West (834 Chestnut Street) locations
What: Of course, pre-cut fruit, smoothies and juices are all prime grab-and-go options at Di Bruno’s, but to me, their shelves stocked with Pure Fare goodies, like the carrot pudding, are the golden ticket. This is perfect because most folks live or work within walking distance of a Di Bruno’s location and while the idea of a carrot pudding may sound weird, it’s actually super delicious (the “cream cheese” frosting helps with that).

Making extra donuts for everyone who has off today so be sure to stop into either location! Deluxe: lemon poppy, raspberry, crunchy peanut butter, almond joy Filled: pb Newman oh buttercream, boston cream

Where: Dottie Donuts; 4529 Springfield Avenue, West Philly and 509 South 6th Street, Bella Vista
What: What is more of a classic grab-and-go breakfast food than doughnuts? Both of Dotties’ locations serve up an innovative and ever-changing menu of delicious vegan doughnuts. My vote is to go big or go home by choosing one of their deluxe filled options, like today’s blueberry jam-filled or Boston cream because, well, if you’re going to eat a doughnut, it’d better be the best gosh dang doughnut.

Where: Snap Kitchen; Multiple locations
What: Snap Kitchen is one of Philly’s most popular grab-and-go spots and it’s a major bonus that it comes with a healthy twist. Snap’s dietary labeling makes a rushed morning breakfast pick MUCH easier, not to mention the delivery option. This oatmeal bowl (which is actually oats mixed with quinoa for a little extra protein kick) topped with almond butter, strawberry compote and candied almonds is an awesome plant-based way to start the day but you can also score vegan-friendly things like protein bars, kombuchas, and juices, in addition to vegan yogurts (when they’re in stock) like Cocoyo and the Coconut Cult.

Where: Sip-N-Glo; Multiple locations
What: While Sip-N-Glo offers a prime selection of bottled juices and elixirs which make a light and easy grab-and-go breakfast, for those who aren’t big on starting the day with a hefty meal, we think a smoothie with some extra plant-based protein thrown in is an awesome way to kick off the day. Their Blue Sky smoothie features lavender, blueberries, banana, cashews, hemp seed protein, and almond milk — a combination great for muscle recovery and an energy boost. Plus, you can chug it on the go all too easily.

Skip the cereal, and try out our Southwestern #breakfast #wrap on your next morning voyage. #WhatVegansEat

Where: HipCityVeg; Breakfast is served at the Midtown (121 South Broad Street) location only.
What: This is the vegan breakfast go-to when you have to eat while walking from hither to thither — and I can attest to this, having eaten many a HipCity wrap on the go. The southwest wrap is basically a vegan huevos rancheros, bundled together by a tortilla. In addition to this prime breakfast choice, you can score a whole slew of breakfast options like a “lox” bagel sandwich or a coconut yogurt parfait.

Where: Soy Cafe; 630 North 2nd Street, Northern Liberties
What: Soy Cafe is the perfect spot to swing by for breakfast and a coffee, tea or smoothie. Their vegan bagel sandwiches reign supreme most appetizing of which features vegan sausage, tomato, soy cheese, and maple-mustard. Soy cafe also offers vegan ham and house-made vegan cream cheese, which make prime additions to all of their bagel-wiches.

Where: P.S. & Co.; 1706 Locust Street, Rittenhouse
What: Sometimes you just need a carb-y breakfast scone to start the day — and P.S.& Co. can definitely make that happen. Plus, it’s perfect for when you’re in a rush because these delights are located right in the display case making them super grab-and-go-friendly. We can personally attest to the deliciousness of the tomato and pesto and the berry pistachio scones. P.S. & Co. also has a fridge at the front stocked with juices, and other pre-made meals. Of course, you can also order something from their made-to-order breakfast menu (we’re a big fan of their breakfast burritos) if you have the time.

Where: Grindcore House; 1515 South 4th Street, Pennsport
What: You can’t go wrong with a place that calls themselves a vegan coffeehouse, right? Grindcore offers Tofutti cream cheese and Earth Balance butter as toppings for their bagels. Other vegan-friendly bagel toppings include peanut butter, hummus and jelly.

Where: Kamal’s Middle Eastern Specialties; Reading Terminal Market (51 North 12th Street, Chinatown)
What: Aside from being named one of the healthiest places in Reading Terminal for their veggie combo platter, Kamal’s also has an extensive menu of fresh smoothies and juices — making it one of our most-frequented Reading Terminal Market stops. Depending on the size of juice or smoothie you want, you can personalize your drink by picking a certain number of fruits and veggies, which they blend with ice. You can also choose add-ons like a ginger or wheatgrass shot to add some extra health benefits to your breakfast on the go.

Where: Chhaya Cafe; 1819 East Passyunk Avenue, East Passyunk
What: This breakfast sandwich is a doozy: a bagel smothered with some vegan cream cheese and topped with avocado, tomato, and vegan chorizo sausage. That’s the Marebear. This is just speculation, but we imagine your walk to work on a not-too cold day while munching on this sandwich would be pretty darn pleasant.